I’m always excited for the Detroit Autorama when it rolls around. Having the chance to tag along with a great friend showing his ’56 F100 for 4 days (with 2 other great friends) made it even more so.  Knowing I’d be able to wander around and check out everything before the crowds showed and after they were gone was well worth the price of setting up and the gong show insanity of tear-down on Sunday night.

I’ll preface this by saying I’m drawn to the high end builds upstairs.  The level of the builds either vying for the Ridler award or for another prestigious award is incredible. The design that goes into them, and the passion and sheer amount of work always impresses me.  I love seeing the design and fabrication limits that get pushed with these builds. As a designer, I love picking up on the little details that tie the build together and elevate it. Talking details with the owners, builders, and designers makes it that much more cool for me.

This year was made even better for me. I am a fan of the car designers (and lucky enough to call a couple of them friends) that got picked for the Great 8. Seeing their work come to life in person is always a treat.  Although some of the more well known builders weren’t there this year, the ones that showed up with the Ridler in their sights did not disappoint.  In my mind, there were a solid four builds that were in contention for the Ridler. There were also some possible outliers making up the remaining Great 8.

Honestly, I’m not sure how the judges picked the Great 8 this year. In my opinion, some of the picks were a slap in the face to the others.  It was almost like they ran out of options, which didn’t make any sense to me as a spectator. There were a number of cars that looked like they should or could have been in contention.  For me, my top 3 Ridler contenders were the ’32 Vicky by Fast Lane Rod Shop, the ’64 Acadian by JF Kustoms, and the ’65 Chevelle by Mike Goldman Customs. 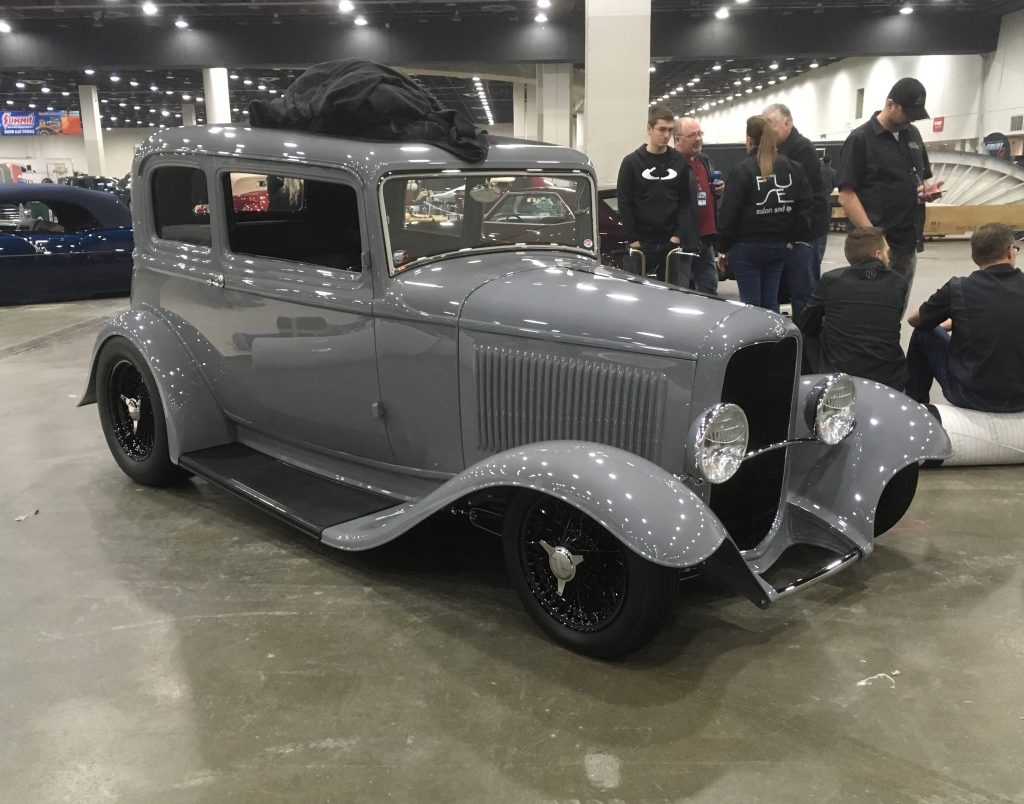 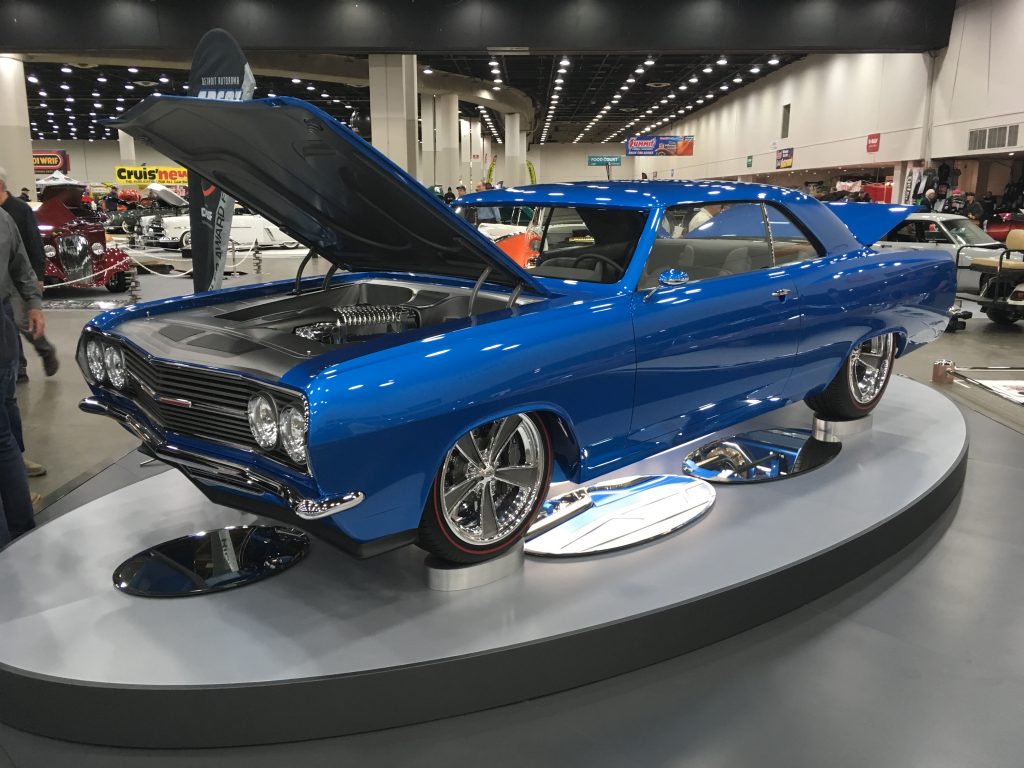 THE OTHER GREAT STUFF UPSTAIRS

All that being said, the Detroit Autorama isn’t just about the Ridler contenders.  There were a ton of other fantastic rides scattered throughout.  Some that stood out for me were; the AMBR  winning 3 Penny Roadster, Hilton Hot Rods Ardun powered roadster, All-Ways Hot Rods ’37 Ford, the whole Cavalcade of Customs display, JH Restorations beautifully built pro-tour Mustang & Camaro, Poteet’s Blowfish LSR car with both engines on display, a beautiful Desoto Hemi powered Phaeton, a pair of exceptionally built off-road trucks by Griffen Fab Works – a 4 door, 2wd square body Chevy pre-runner, and an early 70’s 4×4 Blazer, and the vintage funny car display was simply awesome.  There really was something for everyone upstairs, restored classics, muscle cars, vintage 4×4’s, low riders and bombs, and motorcycles. 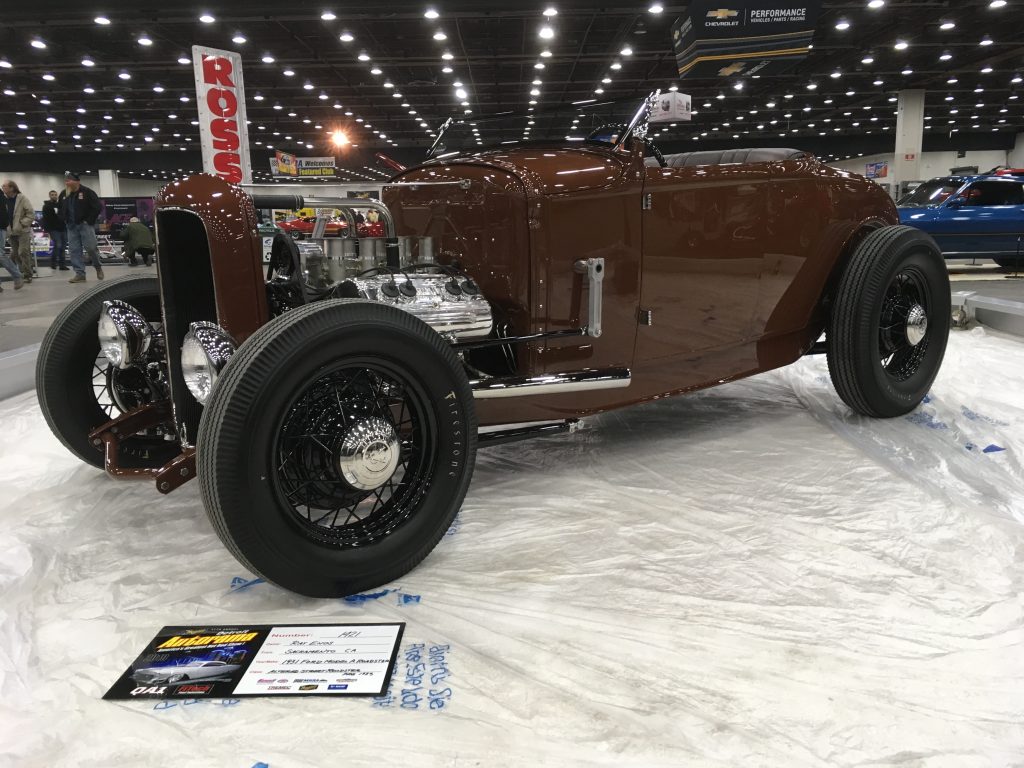 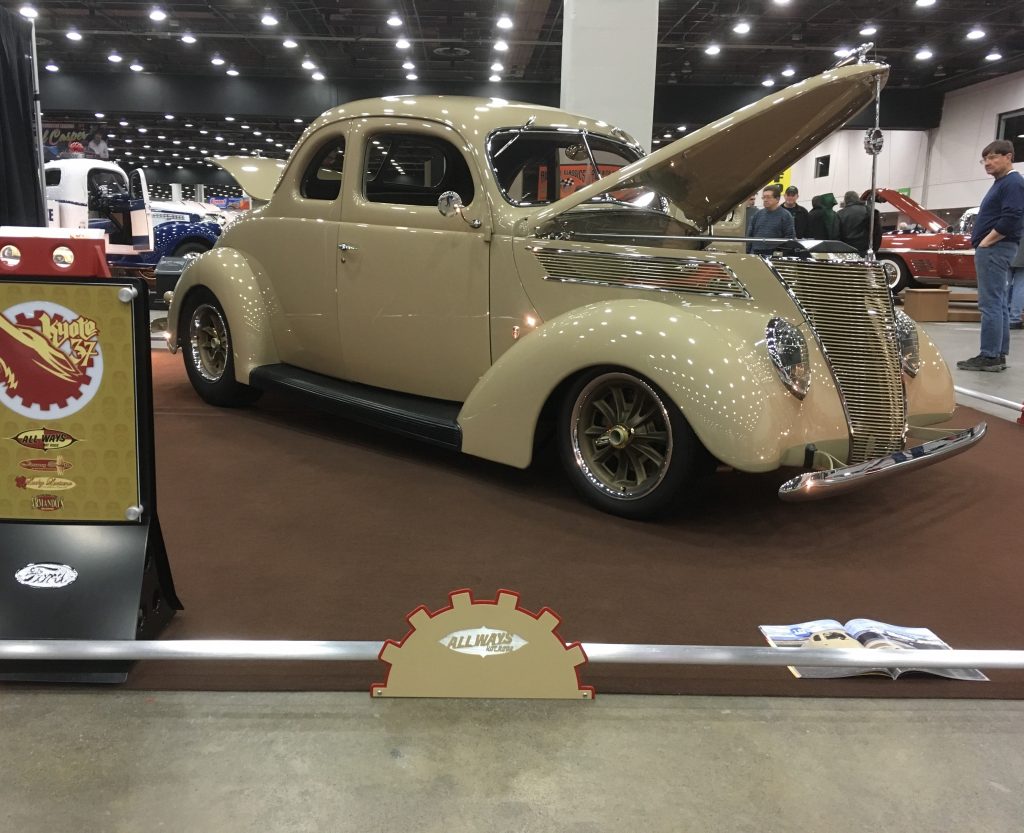 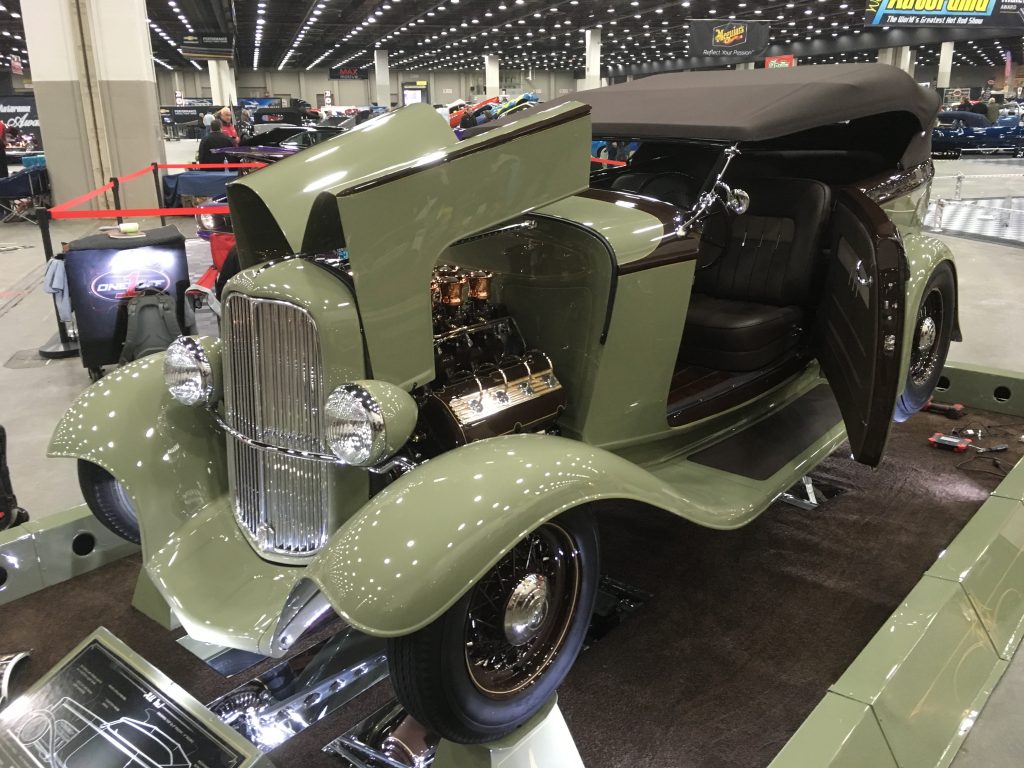 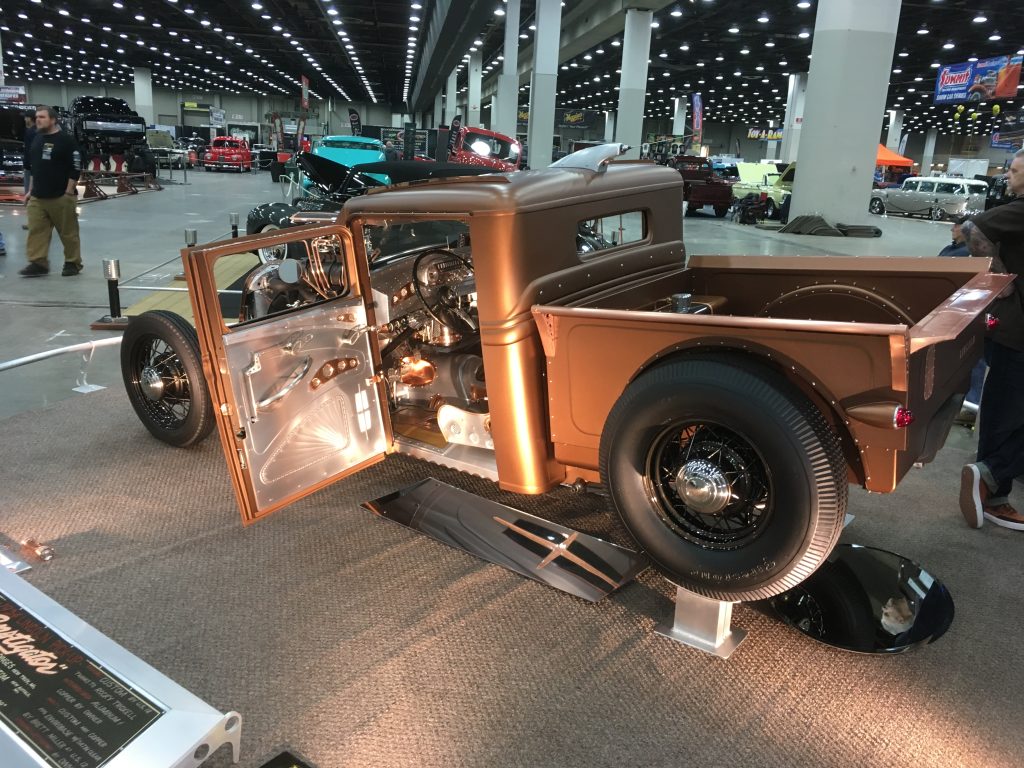 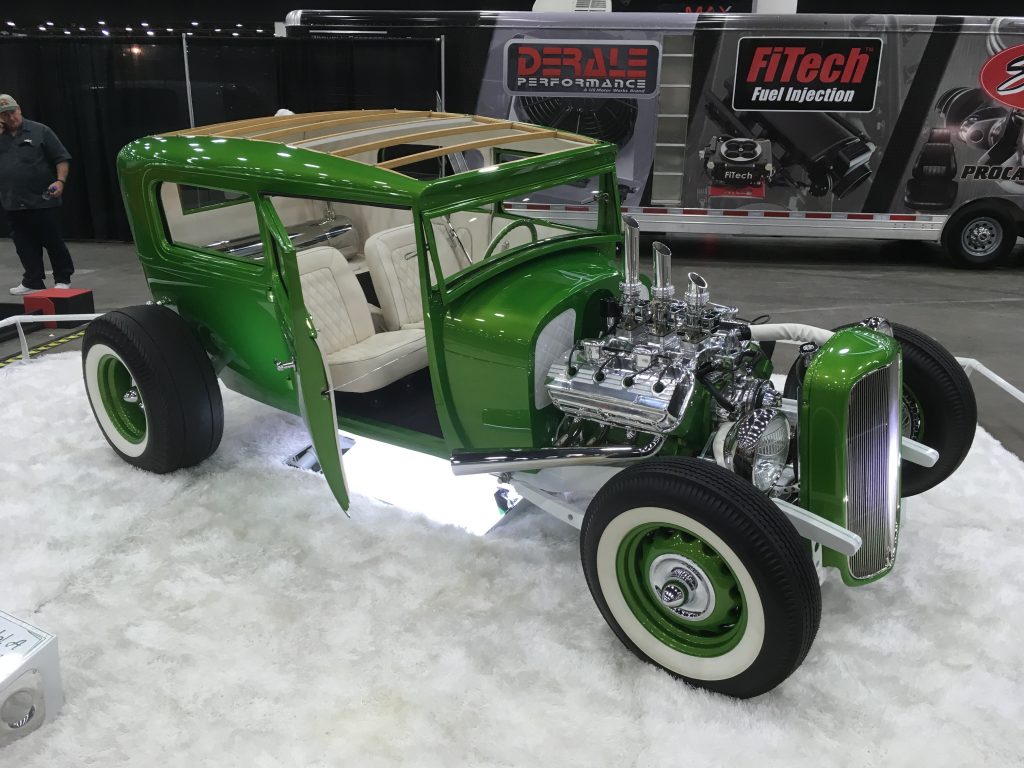 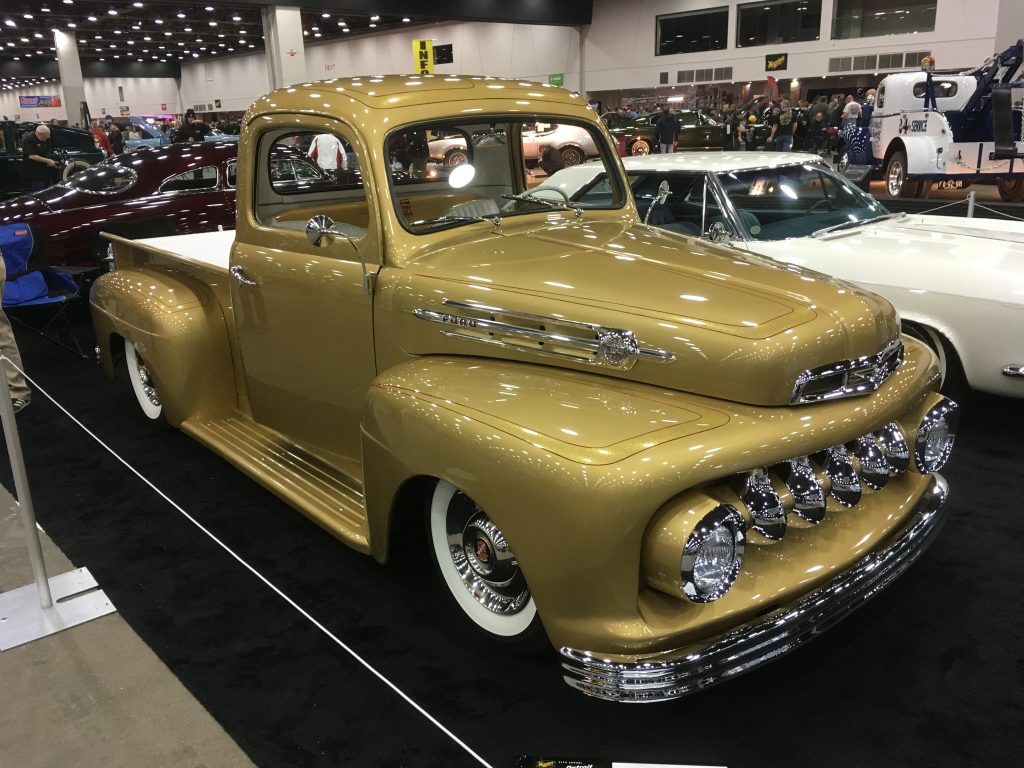 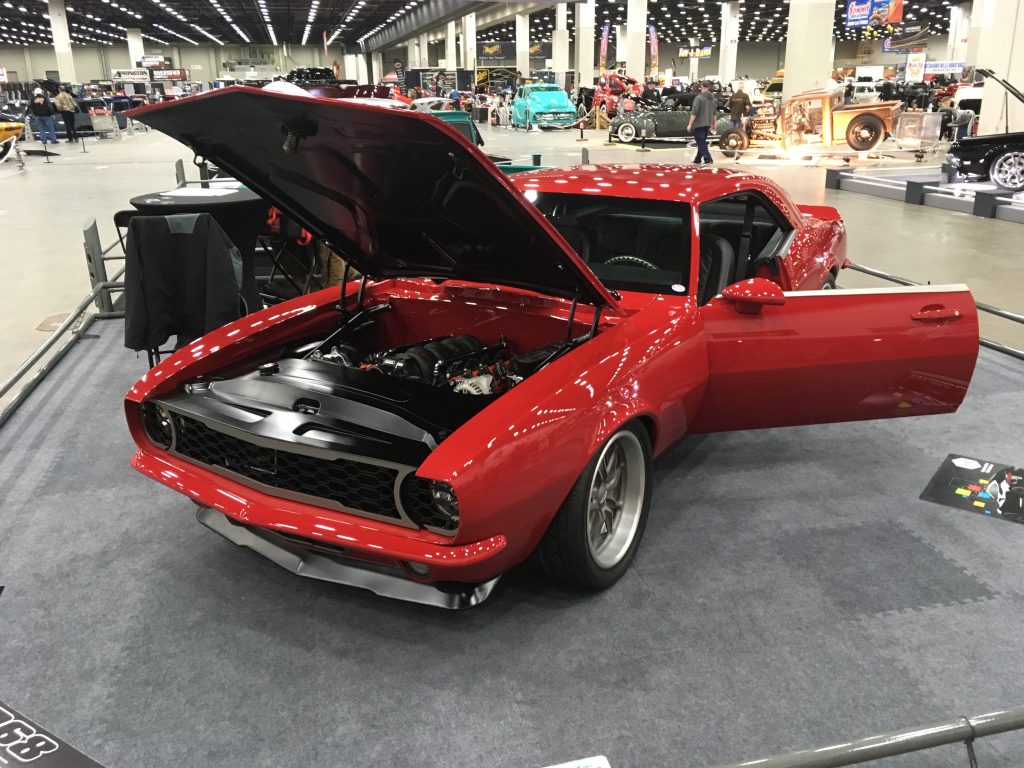 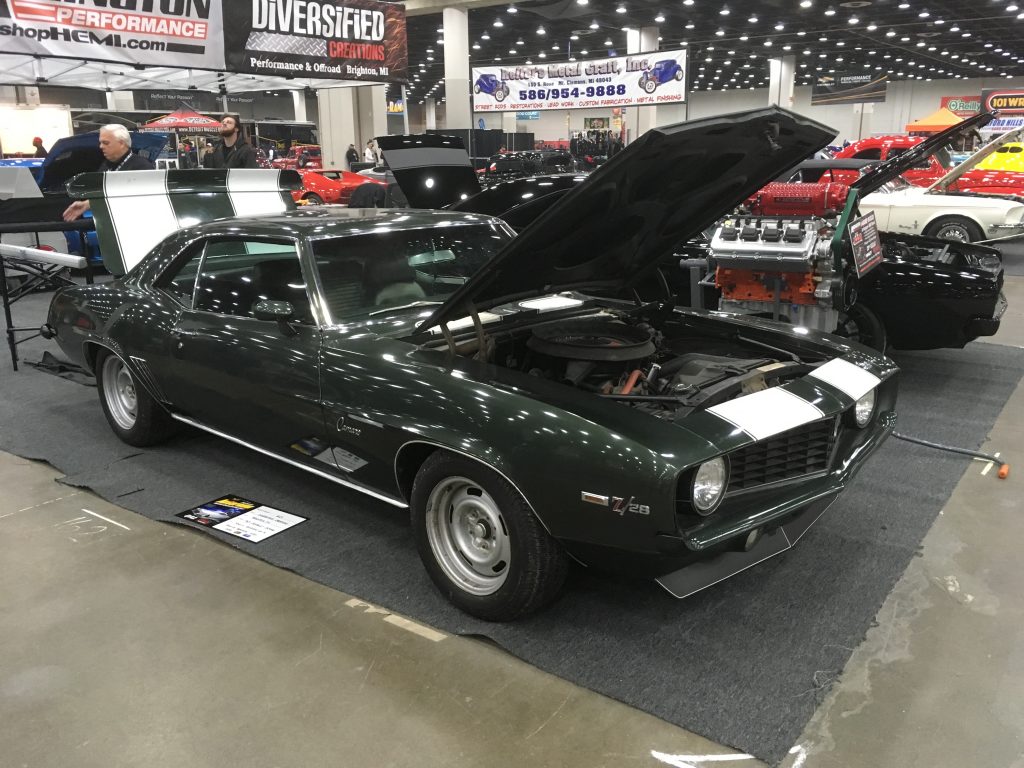 The “downstairs” show at the Detroit Autorama has a completely different vibe than the show upstairs.  Just heading down the escalator, you can feel the difference.    This is more like a gathering of gear heads who happened to bring a bunch of really bitchin’, typically traditional cars & trucks. Everyone is hanging out looking at one another’s rides and chatting about them.  A lot of these hot rods are built by their owners, either by themselves, with friends, or club brothers, and they’re driven – some of them a lot.  Some are also survivors that were built “back in the day” and are being preserved rather than restored.

The show downstairs didn’t seem the same as years past, though. The “build” quality just didn’t seem to be there.  I’m not saying there weren’t any quality cars or trucks downstairs, just not as many as in years past.  A few years back it was like everyone brought their “A game” and the place was jammed with nice builds, survivors, drivers and everything had a traditional feel to it with very little “scabbed” together vehicles.  I guess with fewer cars to look at, the “rat-roddy” cars (for lack of a better term) or non-traditional cars were easier to come across or notice. 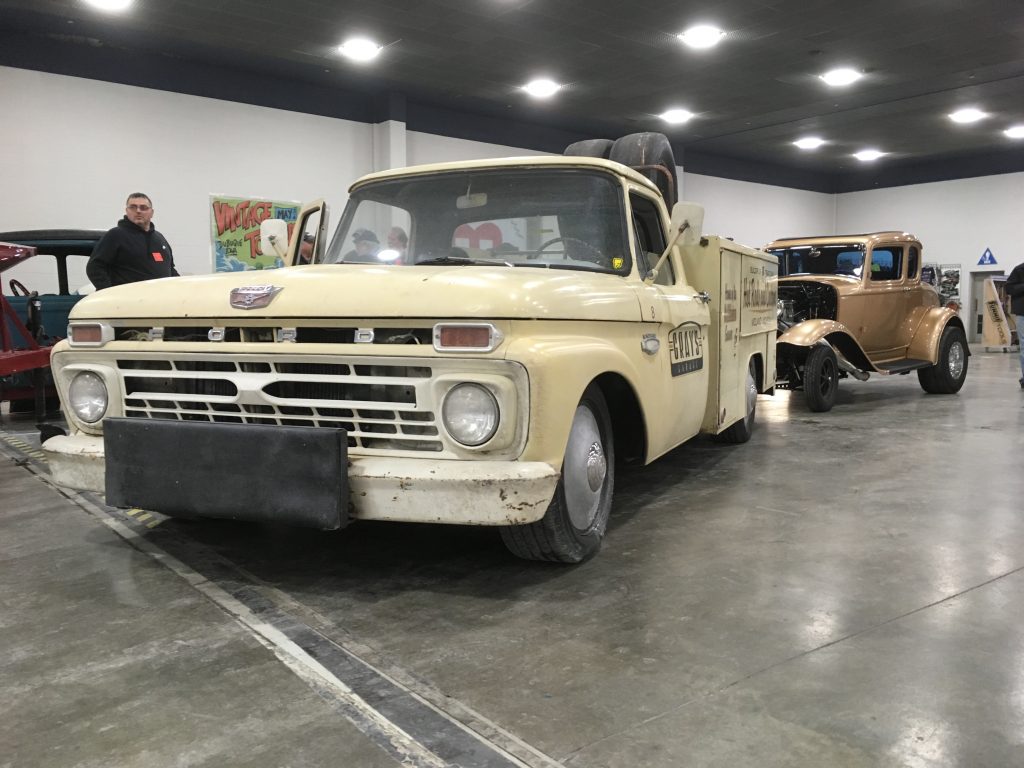 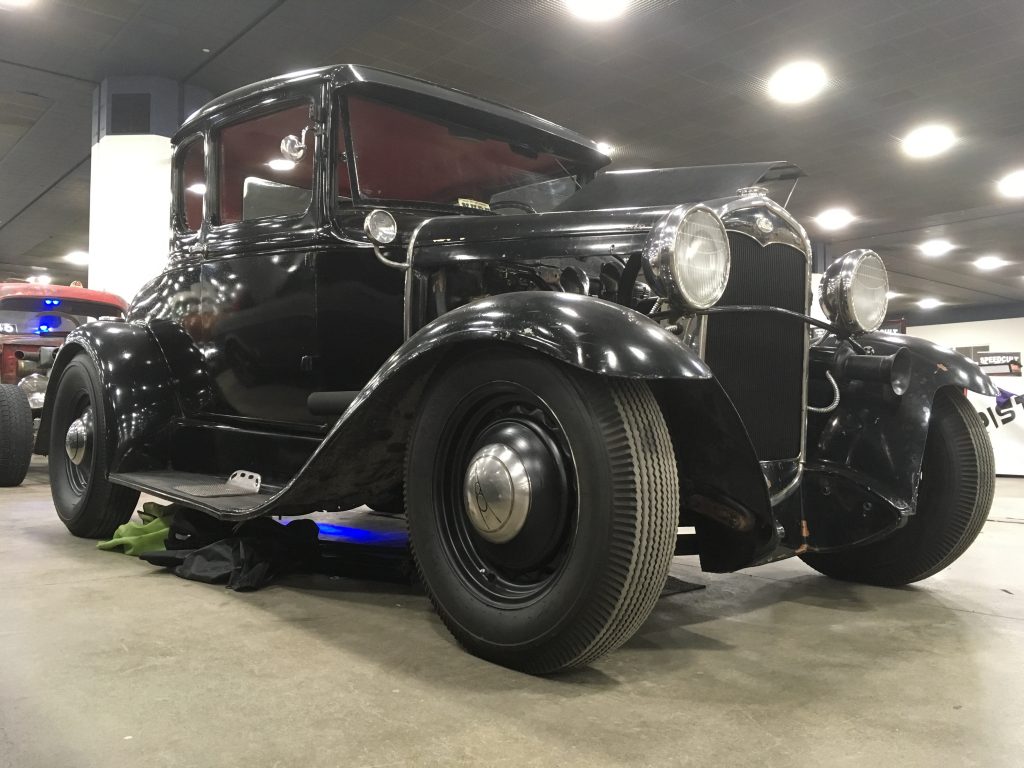 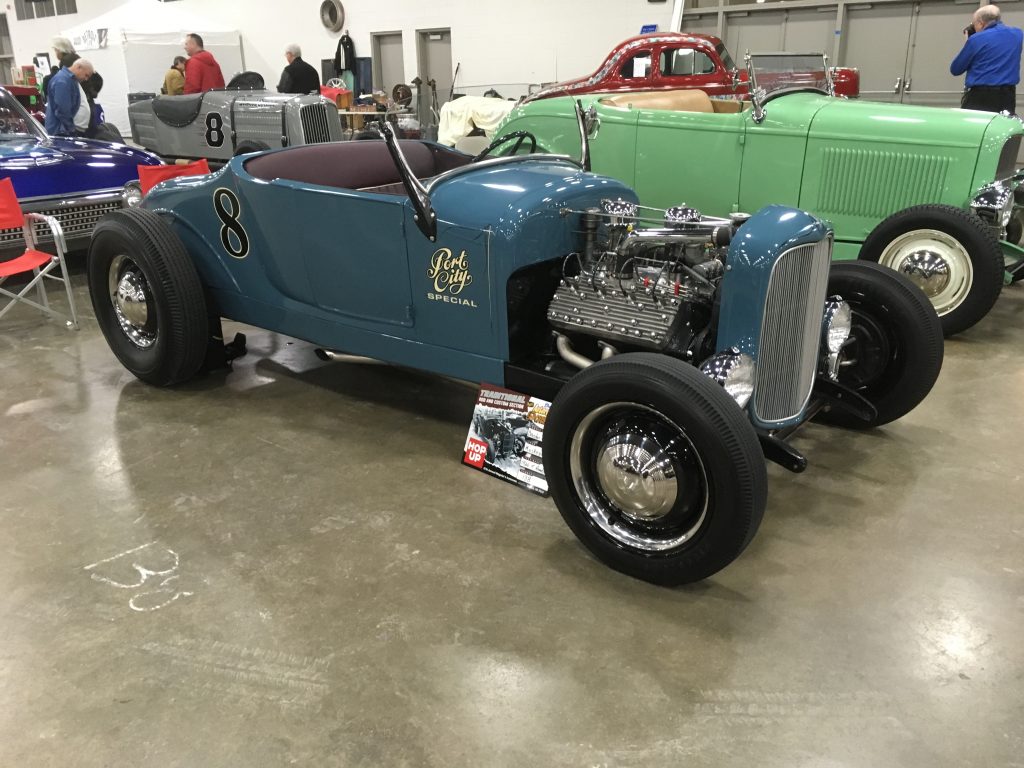 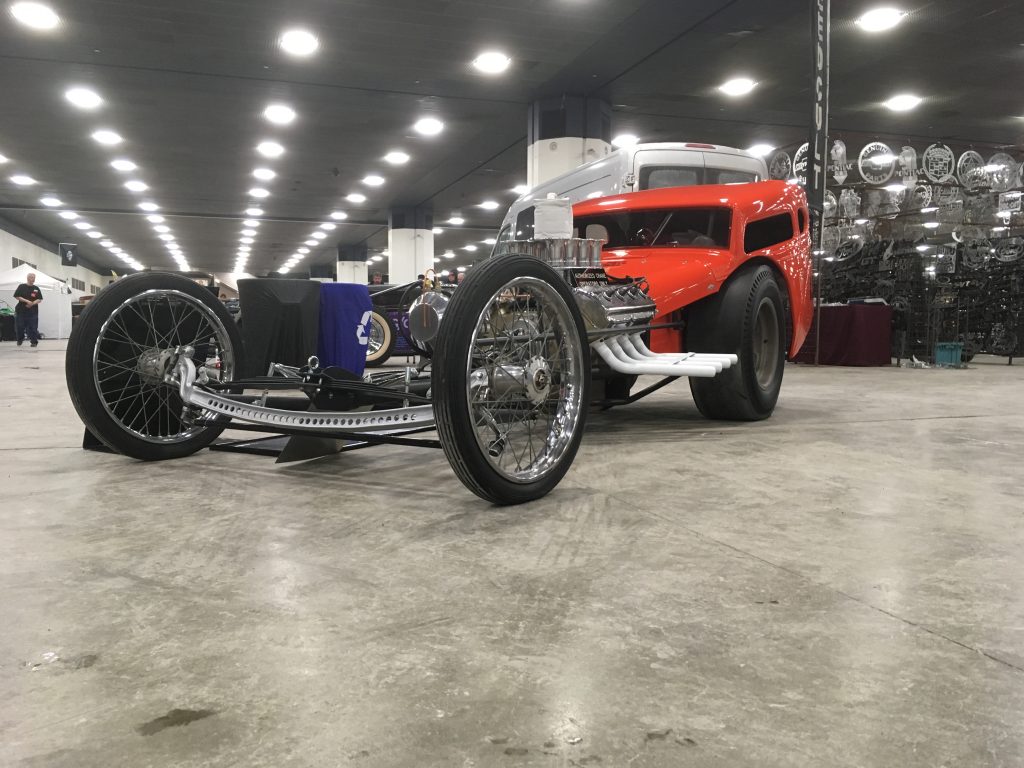 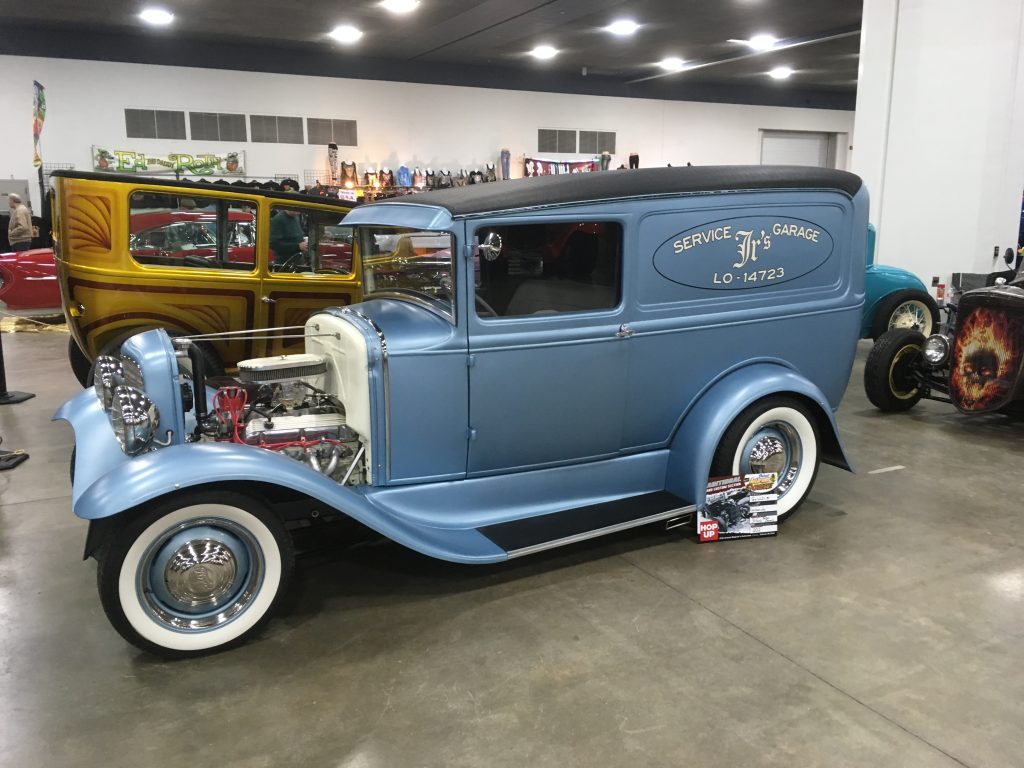 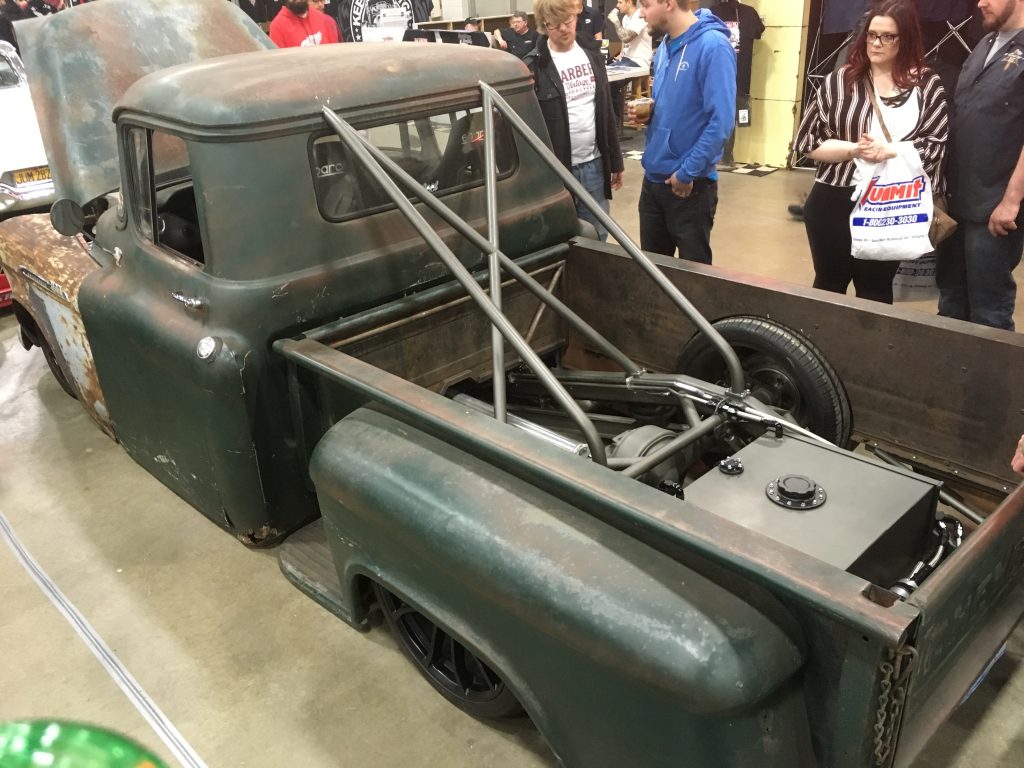 What makes the basement even more cool for me is Artist Alley.  Here you’ll find some of the greatest people (and not just in talent, but as human beings) selling their art.  This year the alley was packed with more of them than in the past which was awesome to see.  I’ve gotten to know quite a few of them over the years and feel pretty lucky to call them friends.  I wish I was little more prolific in my businesses so I could pickup something from everyone!  If you ever do get to this show, or any show that has artists for that matter, PLEASE go support them!  Oh, and don’t be a knob and try to beat them up on pricing, seriously, just don’t. 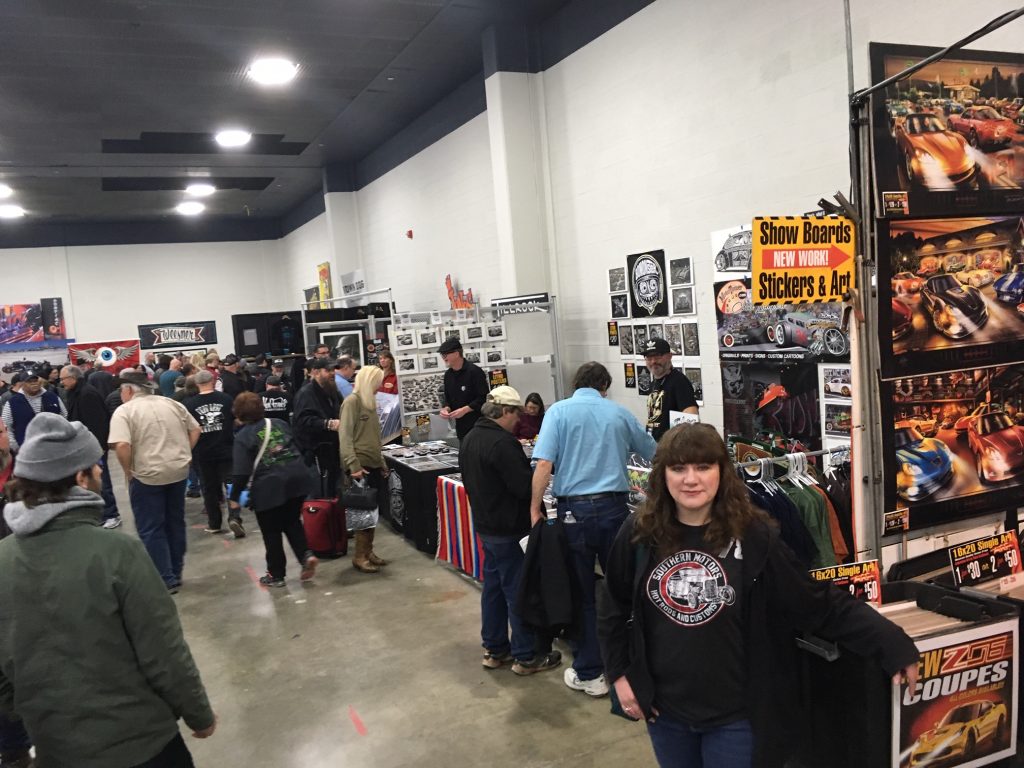 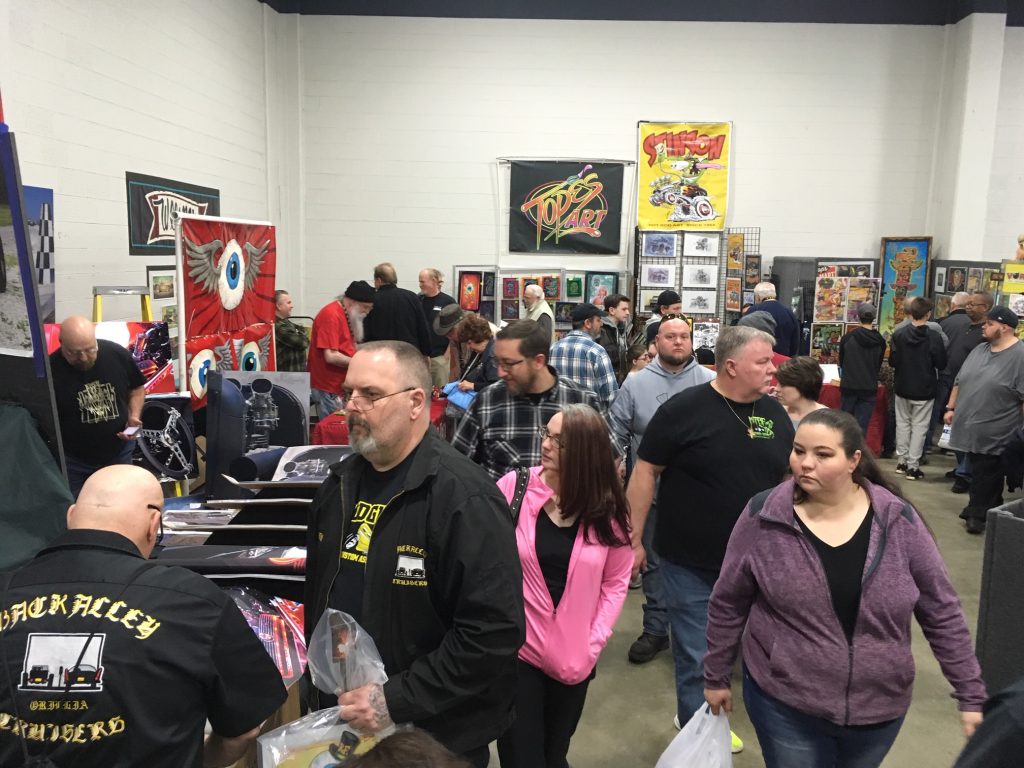 The Detroit Autorama was a great show as always, but in my opinion, was “sparse” compared to previous years.  Hopefully that will change and both upstairs and down will be jammed wall to wall in the coming years.  And yes, there will always be things we don’t “get” as spectators, but we don’t always need to “get” it. We just need to enjoy it with the people we meet and get to spend time with while there.  One last thing to keep in mind, while the high-end builds upstairs are pushing the limits of design & fabrication, the people building their own stuff downstairs could very well be pushing their own limits, which to me, is just as noteworthy.