Right after our success at SEMA 2018, we decided that we were going to attend more shows in the future. It was automatic that we were going to attend the 2019 Grand National Roadster Show in Pomona, California. The Grand National features the finest cars in the country and the heavy hitters of the car scene are always in attendance. It was the perfect opportunity for us to do multiple interviews and podcasts. Making the decision to go was easy, but we had no idea what was to come.

“JUST GET SOME MEDIA PASSES...”

The 2019 Grand National Roadster Show was scheduled for January 25 through January 27. On January 2nd, Brian and Brad said, “We should call John Buck and get some media passes.”

That sounded great, as we could use those passes for special access to work the show. After further consideration, we realized that just taking pictures and maybe commandeering someone else’s booth for a few podcasts would not suffice. The show was rapidly approaching, and the clock was ticking.

THE DECISION IS MADE, AND THE WORK BEGINS

After numerous discussions with our buddy Kevin Doyle of RodShows, it was decided that our best bet was to set up our own booth. We were all still feeling the financial effects of Christmas, so we braced for impact. The next two crazy weeks were a full scale assault on our patience, our group goals, and our wallets! All three of us are perfectionists, so just throwing something together was never going to happen. With a plan in place, we sorted out our assignments and got to work.

BRIAN KNOCKS IT OUT OF THE PARK

Brian had a vision of how to take this plain 10′ x 10′ booth space to the next level. He put some renderings together of the finished booth and sent them to the crew. They looked incredible. These renderings had a high-end look that were way beyond what Brad and Alex were initially thinking. Brian also did the layouts for the pair of amazing banners that describe a bit about what Round Six does. Working around the clock, he continued to knock out projects, like designing even more stickers (13 designs in all) and new business cards. He also designed a slick backdrop with a brick motif with custom, timed color-changing lighting effects that made a huge effect on the professional appearance of the booth. 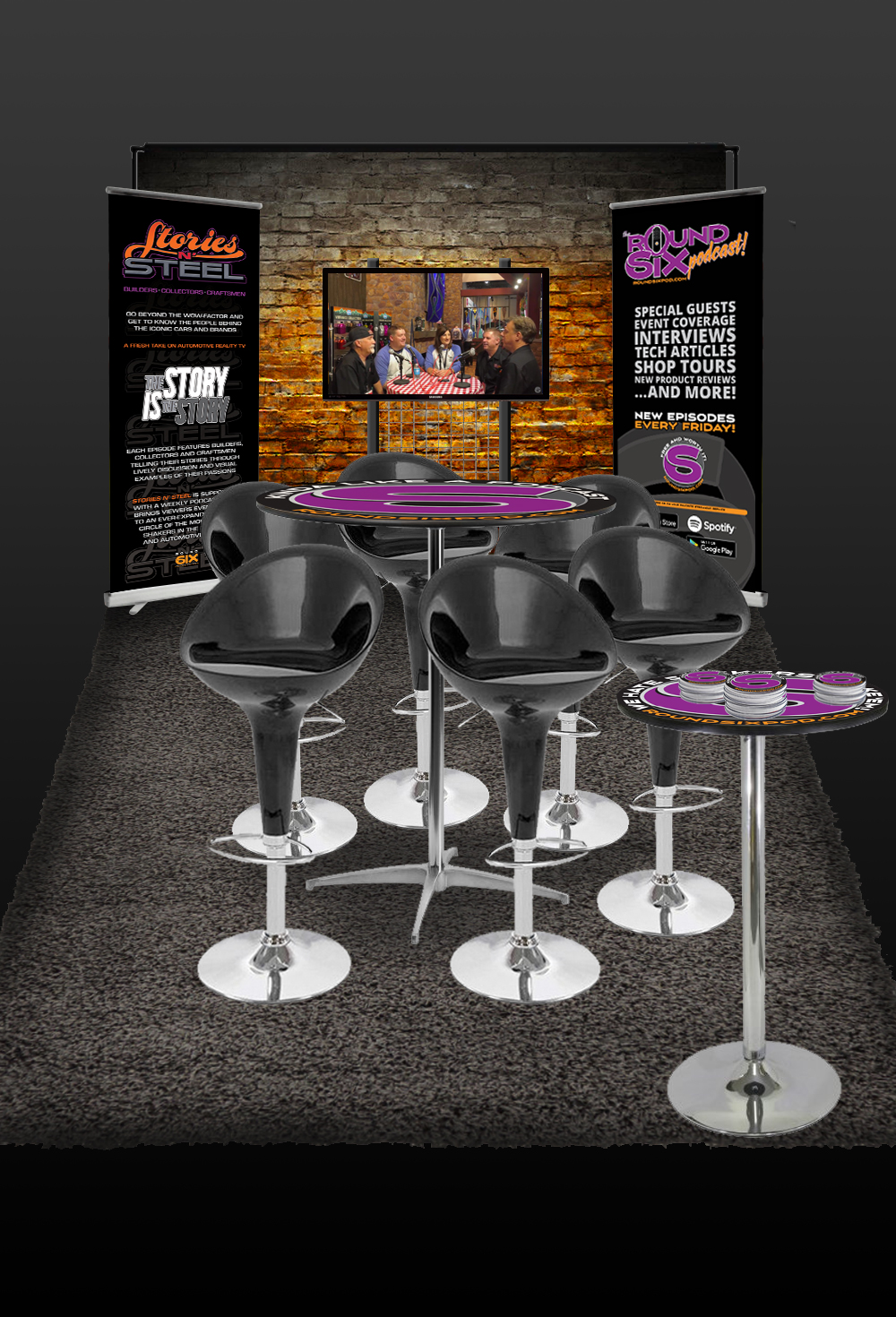 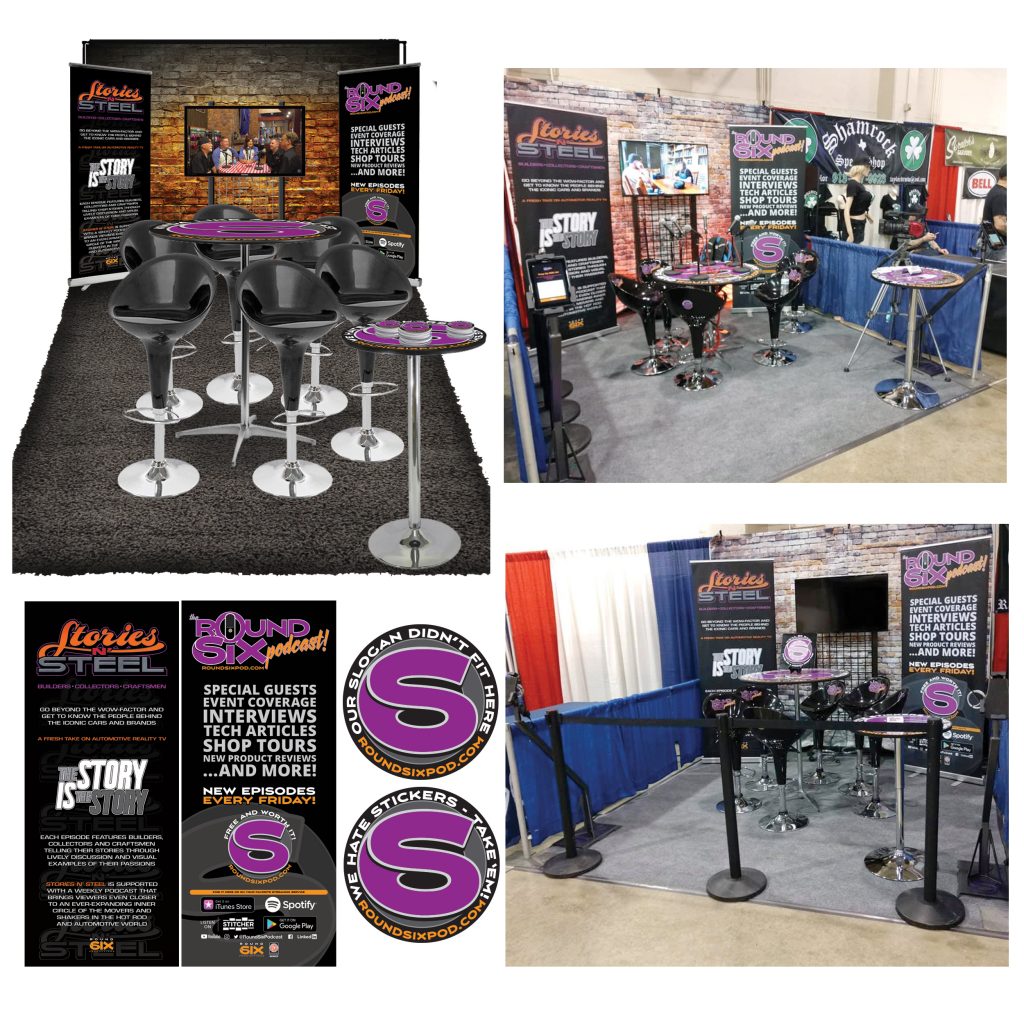 Knowing that we needed to have some cool chairs, Brad started searching. There’s nobody better at sniffing out a deal, and he didn’t disappoint. He found six cool looking bar stools locally on OfferUp. Brad also scored some steel mesh backdrops from fellow pinstriper Jeff Styles (thanks, Jeff!). These would hold the big screen TV and be the center display of the booth. Brad convinces (begs) Mike at Exile Fabrications to build tablet holders for logging email addresses. Mike is a master fabricator and he built a pair of stands that were absolutely stunning. Brad also coordinated with Jason Ardenski at Impact Signs for making our cool table top covers and stickers. Brad provided the computer files of Brian’s artwork and Jason printed them on vinyl and applied them to the tables. 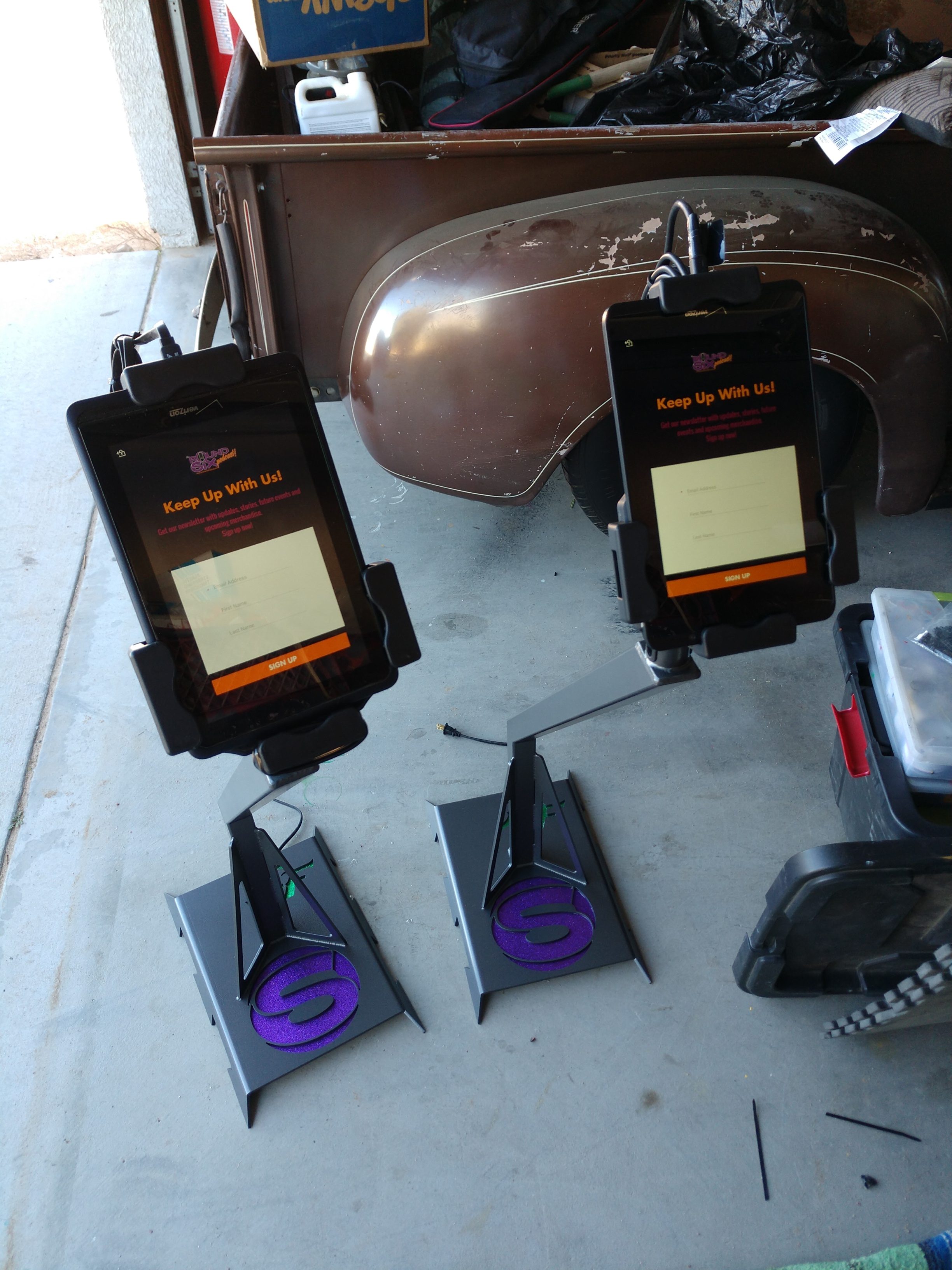 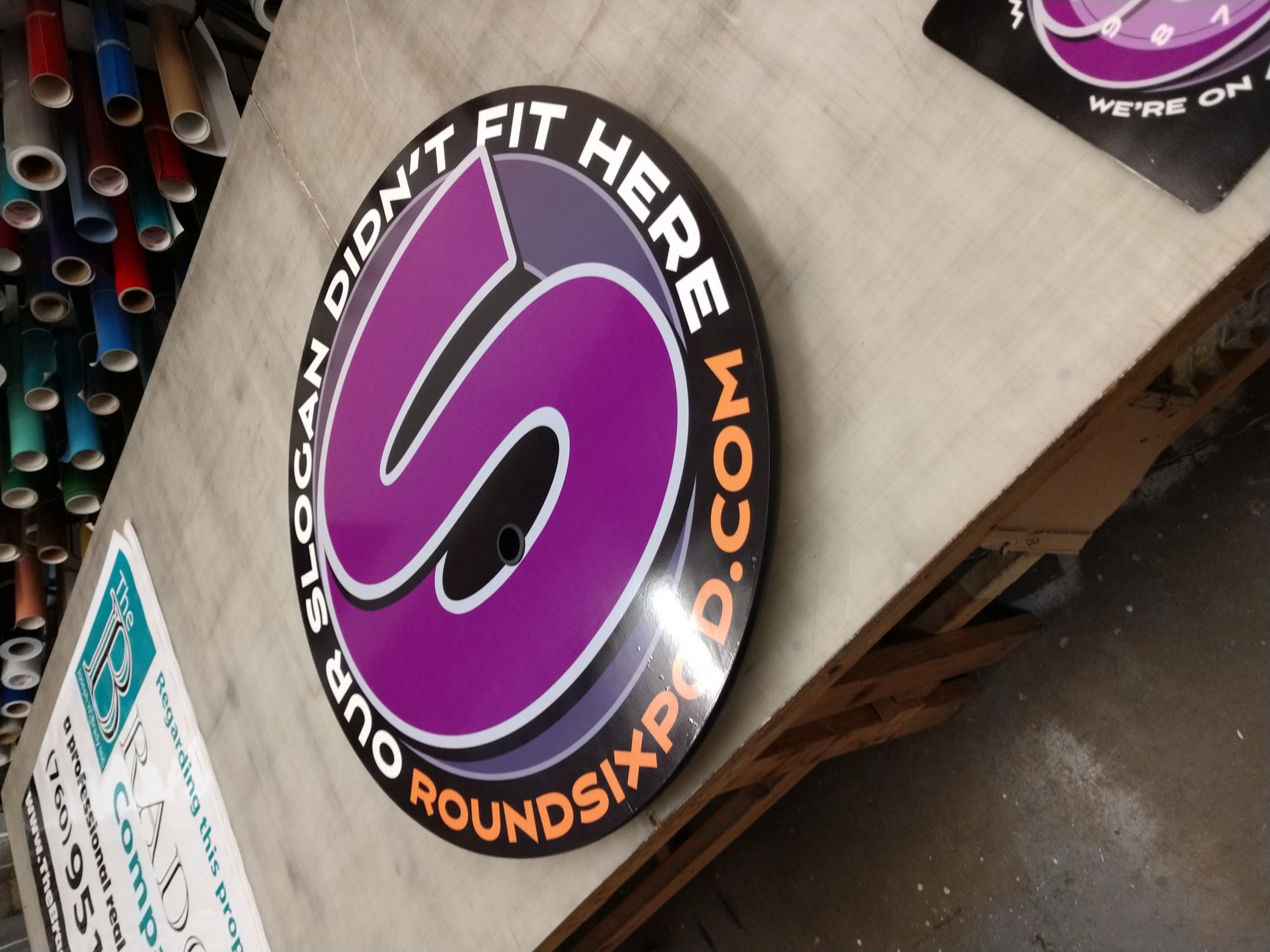 ALEX WORKS THE TABLES AND GETS TO FABBIN’

Knowing that we needed a recording table and a display table for our stickers, Alex went to work. Amazon had just what we were looking for, and a 36″ and a 24″ table were ordered. We had plans for showing the Stories In Steel video promo, so Alex went to Best buy and got a 43″ TV. The shape of the stands were such that an off-the-shelf TV mount was not going to work. Alex built a removable mount bracket that makes it simple to set up. We wanted carpet in the booth, and finding the right type wasn’t as easy as we had thought. After a bit of searching, Home Depot came through with a low profile gray loop carpet. 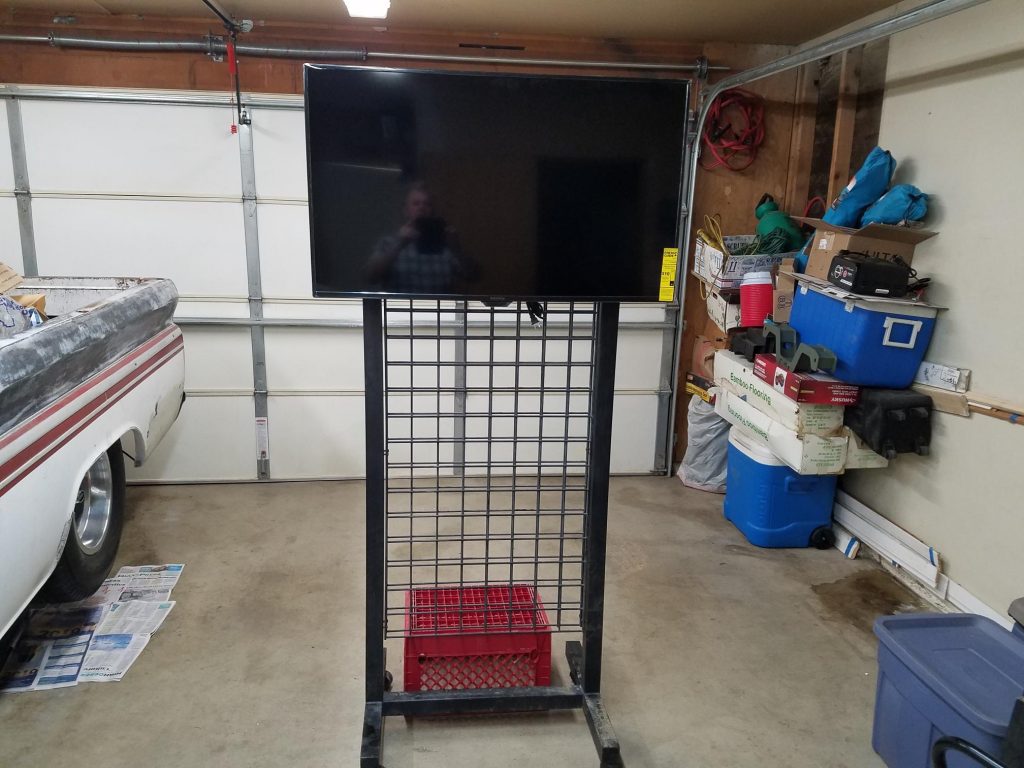 SETTING IT ALL UP

On the day before the show, we arrived in Pomona with the all of our hard work in tow. After a few hours of assembly, we stood back and looked at the final product. This “simple” booth idea had turned into a professional looking product! Compared to the other adjacent booths, we had the best looking spot in the building. The Round Six Experience was almost underway. 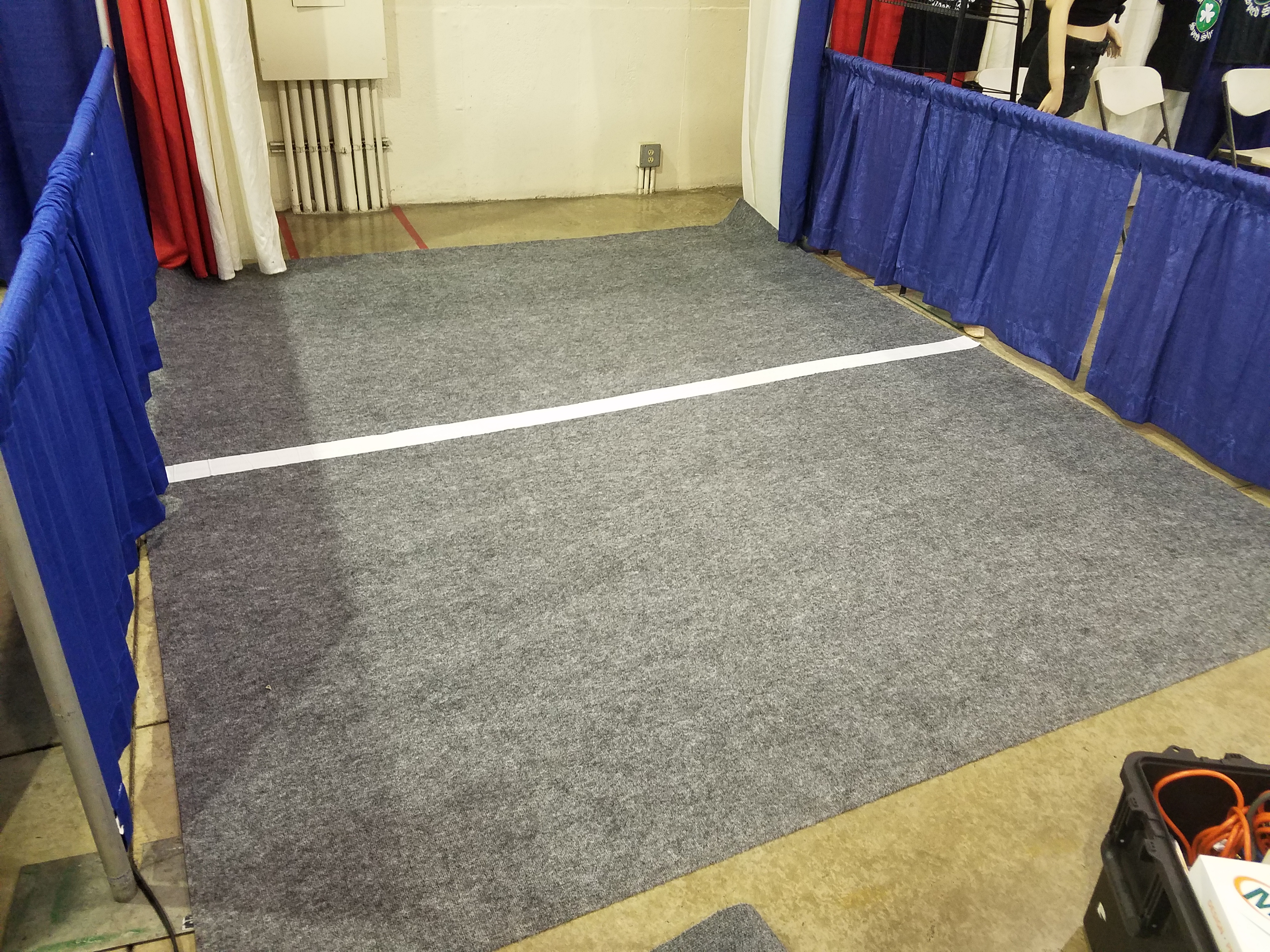 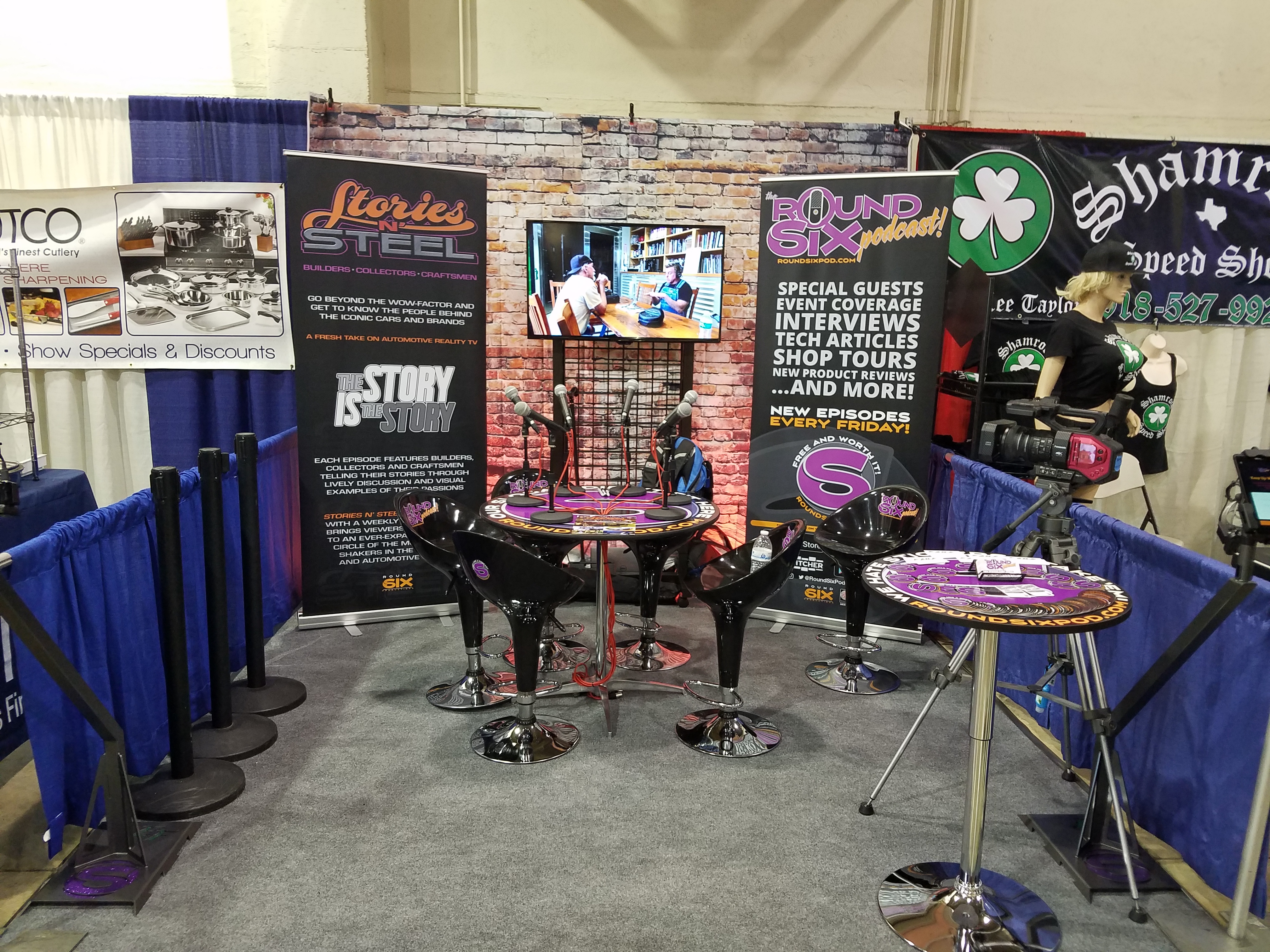 To say the weekend was a success is a serious understatement. We kicked ass at the show! A total of 13 podcasts over 3 days with some of the biggest names in hot rodding. We had heavy hitters hanging out in our booth all weekend. All of the hard work had paid off. We had accomplished what we had came for. This is just the beginning of what the Round Six guys are planning to do in 2019 with even bigger goals on the horizon. Stay tuned… 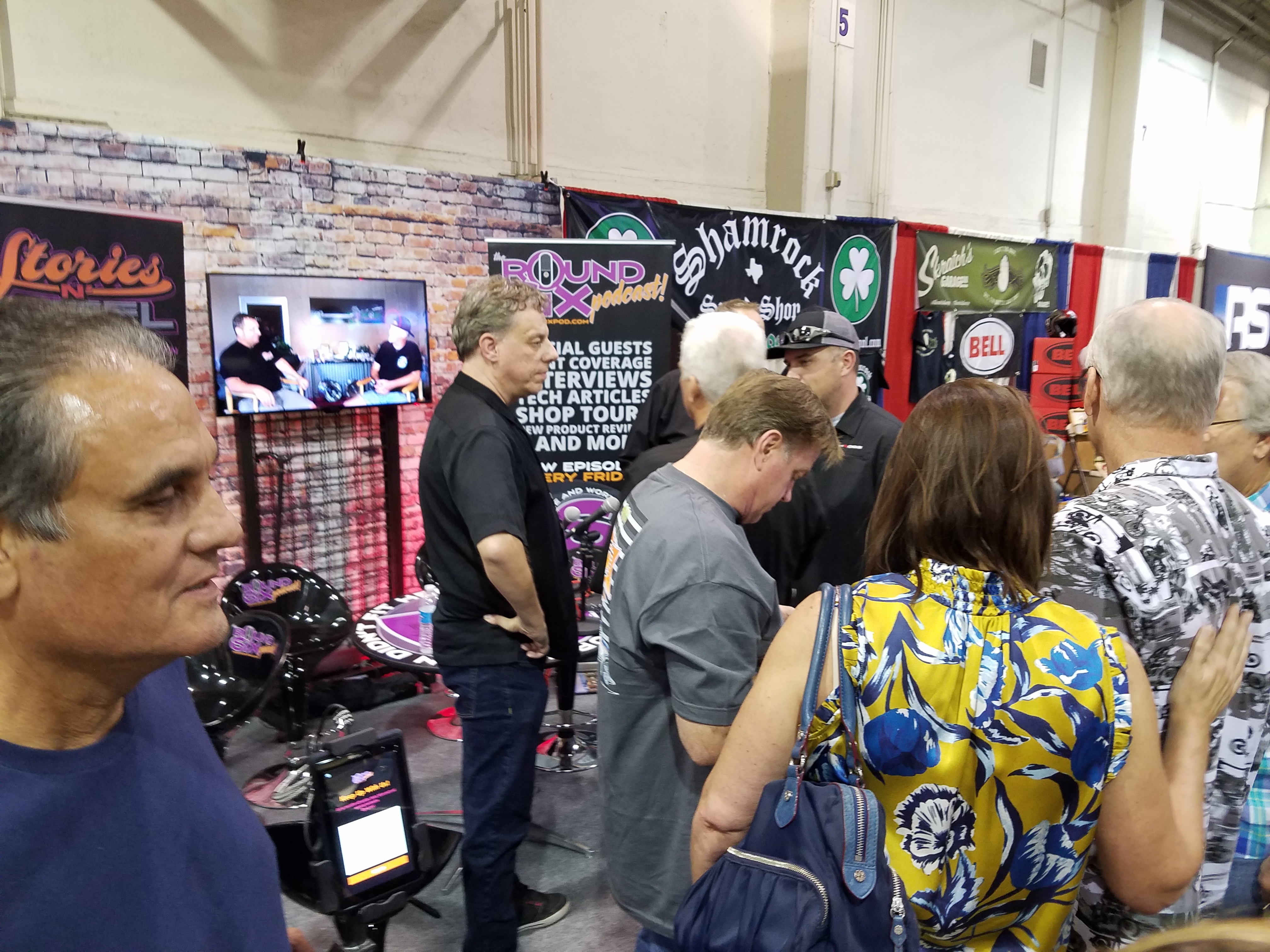 AND A SPECIAL THANKS GOES TO….

Round Six would like to thank the following for all of their assistance in making this happen!