Welcome to Part Eight of the Project White Trash series; an on-going story highlighting the resurrection of my 1964 Chevy C-10 truck that was rescued from the scrapper.

The last episode focused on getting the rear axle narrowed the proper amount to run the 15×8.5-inch ET Super wheels.  After some brake line fabrication, the truck was finally ready for it’s new wheels and tires. Once bolted on, I finally got to see if all the hard work was worth it. Seeing the truck on its new wheels and at a drastically lower ride height was exciting. But after a few minutes of looking at it, I knew that there was much more that needed to be done.

First of all, at the height I wanted the lower control arms were about 2.5-inches off of the ground. This was not going to work, as the control arms were guaranteed to hit everything in the road. Secondly, the front wheels were now about one inch too far back in the wheel opening. This is a natural phenomenon that occurs when you lower the front suspension of a 1963 through 1987 GM truck. Third, the rear height was about two-inches too high and needed to come down.  We we getting there, but there was still a long way to go.

A PIECE OF CAKE, HE SAYS

I’ve known Brad King since 1987. Not long after we met, I remember him saying that he always wanted to “Z” the frame on a ’73-’87 GM truck. He had owned one back in the day that had hydraulics on it, and was quite aware of the lack of ground clearance in the front when they’re lowered. Through the years, the topic would come up quite often. Each time, Brad would go through the steps on how he would do it. And he would always end the conversation with the words, “It’s a Piece of Cake.”

All of my years in the aircraft business have made me a bit of a detail- freak in everything I do. I don’t rush into anything without a fully detailed and hammered-out plan. Having Brad compare the ease of this job to a piece of cake made me very skeptical. All I could imagine was a truck cut in half and an owner who realized that he reached the point of no return. I’ve seen good projects turn into parts cars when doing stuff like this.

MANY CHOICES, NONE OF THEM CHEAP

In recent years, the aftermarket has been very kind to the GM truck world. You can buy nearly everything you’ll ever need, from restoration items to hot rod suspension parts. The custom suspension parts that are now available are incredible. From complete front and rear suspensions to complete frames, coil spring or air ride, it’s all there. I researched many of these options as a way to improve my front suspension geometry and to gain ground clearance. I came to the same conclusion every time. My limited budget couldn’t afford any of them. Hearing this, Brad started up his same old conversation about “Z-ing” the front suspension. This time, I started to listen. I liked the idea, but I wasn’t comfortable just yet.

BRAD AND BOB PULL A TRICK

One morning, I’m at work and my cell phone rings. It’s Brad, and we talk for a few and brings up an idea that 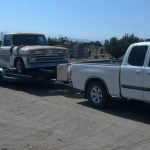 our buddy Bob Larson wants to do a little metalwork on my truck. I had the lower fender repair section and the piece that goes behind the driver’s side rear wheel that I was planning to replace. Bob is a metal magician, a guy that reputable shops will call when their metal guy has a job that he can’t do. Of course, when a guy like Bob wants to work on your stuff, you let him do it. They planned to grab some breakfast and then trailer the truck over to Bob’s shop to do the work.

As I hung up, I got a weird feeling that something just didn’t seem right. Right then, I made the plan to swing by Bob’s on my way home from work to check on the progress.

The workday took forever to get over with, and I drove the 66 miles from work over to Bob’s place in Apple Valley. I walked in the shop and they weren’t working on the patch panels at all. They had the truck about 2 feet in the air and the entire front frame section was resting on a jig. Bob was welding on the driver’s side and Brad was grinding on the passenger side. I started to laugh because after about 20 years of talking, Brad had finally achieved his goal of “Z-ing” a GM truck. I wasn’t mad at all. It was something I had seriously considered but was too cautious to pull the trigger. There was no turning back.

HERE’S WHAT THEY DID

When the truck was pulled into the garage, it was carefully leveled and measured. The frame was jigged at ride height in front of and behind the crossmember. Square tubing was tack welded to the tops of the frame rails to keep them from spreading apart once the frame got cut. 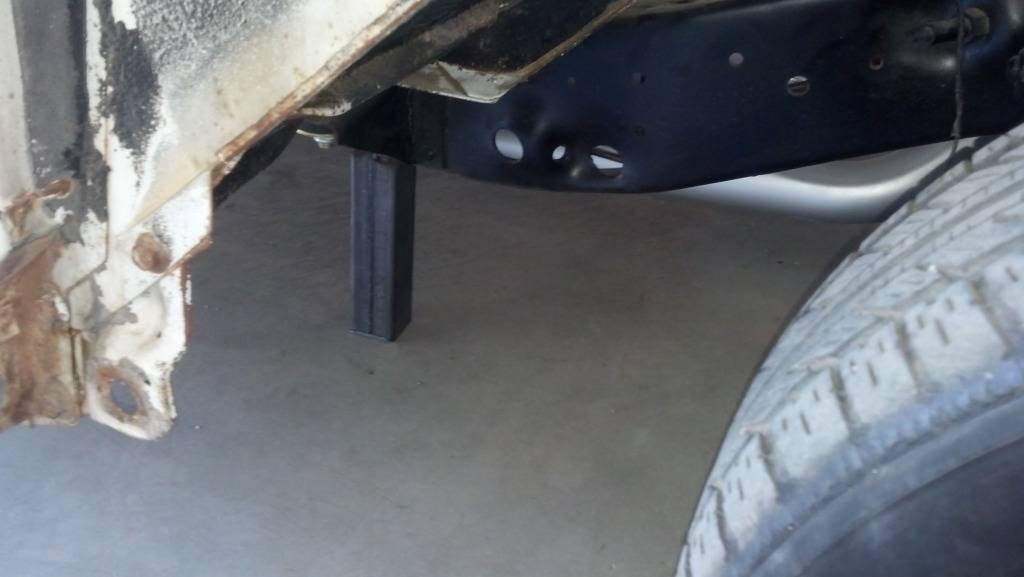 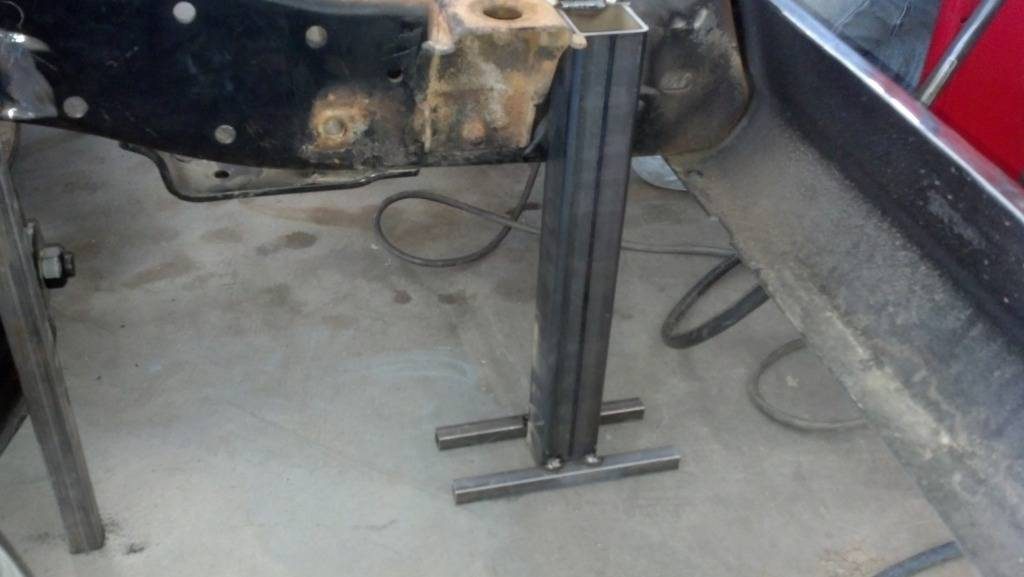 The section directly below the front crossmember was jigged as well. 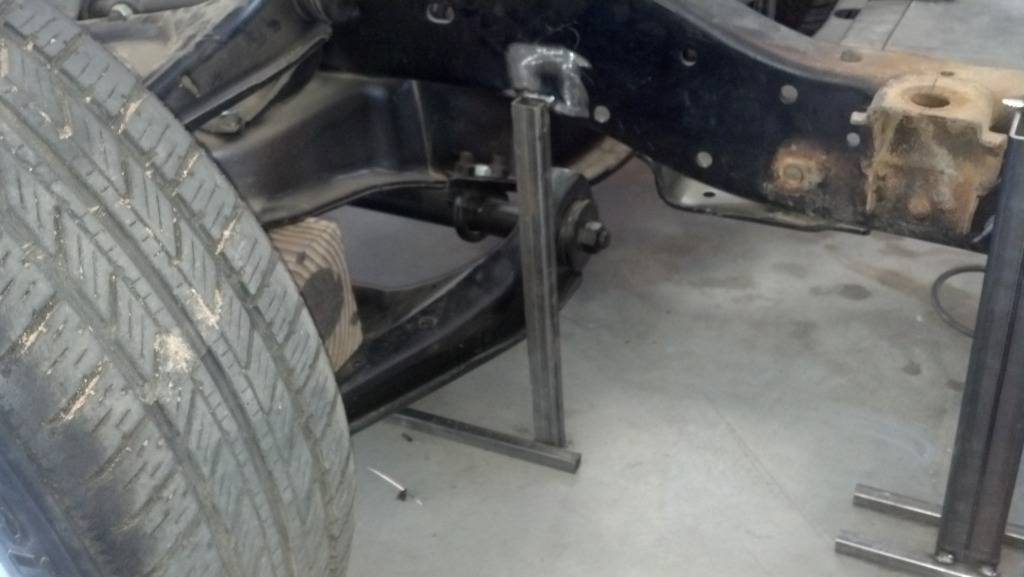 TIME TO FIRE UP THE SAW

After a lot of measuring, it was determined that the frame would be “Z’d” two inches up higher, and forward one inch to center the wheel in the wheel opening. Once the jigs were in place, they determined where the best place to cut the frame would be. In the rear, the frame makes an inward taper, so you have to take that into account. Also, you want to ensure that you make your cuts aft of the upper shock stud. You want every bit of the crossmember, including steering and shocks, to move up as one complete assembly.

The front cuts have to be carefully planned out, because you have a few things to concern yourself with. First, the steering box. Everything around the steering box area starts to get tight, especially the radiator. You have to plan your cut where it’s just forward of the steering box and just aft of the radiator saddles.The first cuts are made. You can see the jigs holding it all in position. 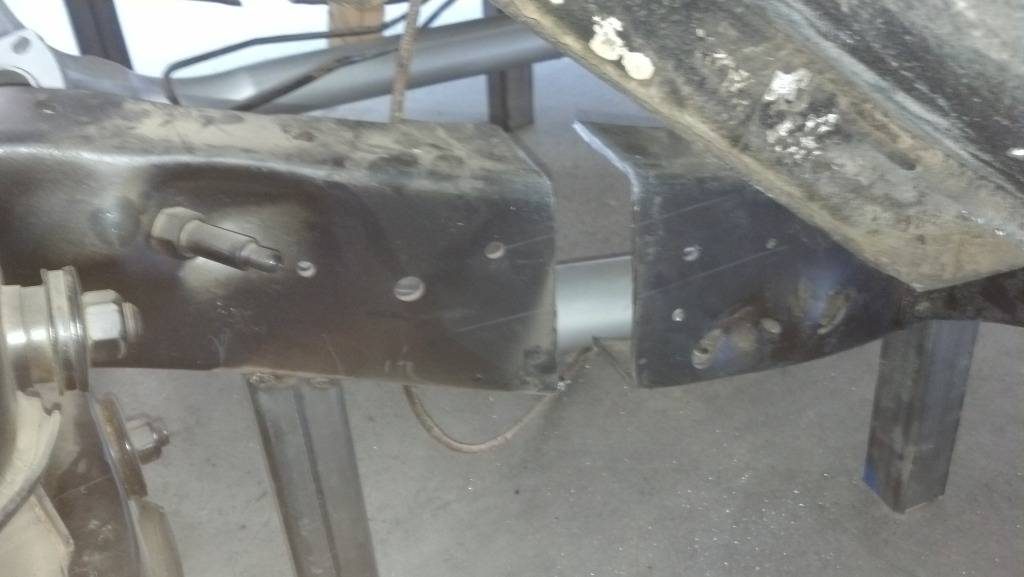 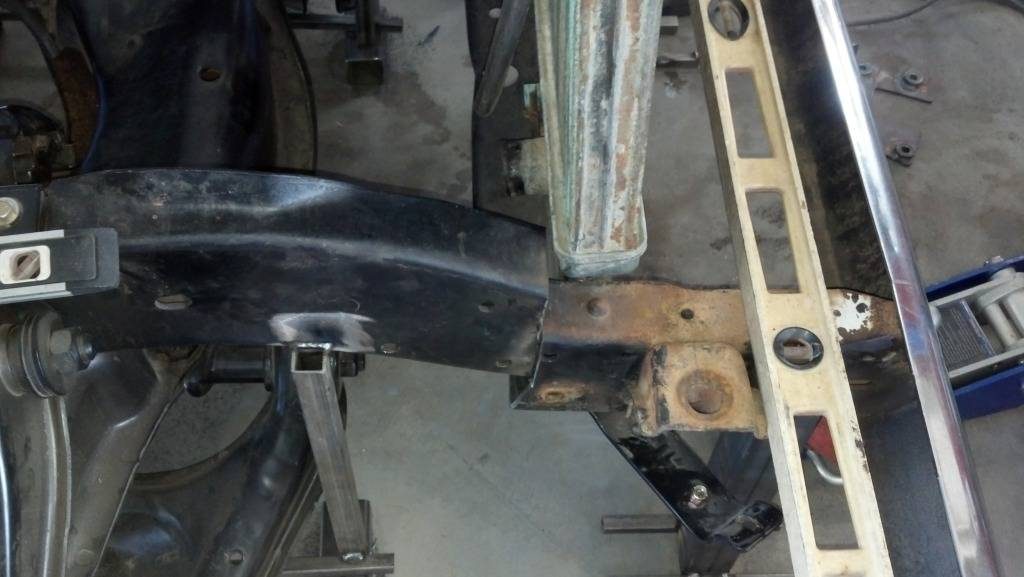 Here’s where the jigs do their job. If you recall, there were two jigs under the frame (front and rear) and one under the front suspension. The decision was made to “Z” the chassis two inches, meaning that the entire front suspension was moving up two inches in relation to the frame. To accomplish this, 2×2-inch pieces of square tubing was placed under the front crossmember jig, raising it up. I also wanted the front wheels centered in the wheel openings, so the entire crossmember and jig were slid forward one inch. This meant that one inch of frame had to be removed from the forward cut area. Once this was done, the sections were tacked together. The rear cut area needed a one inch section added to compensate for the wheelbase change. 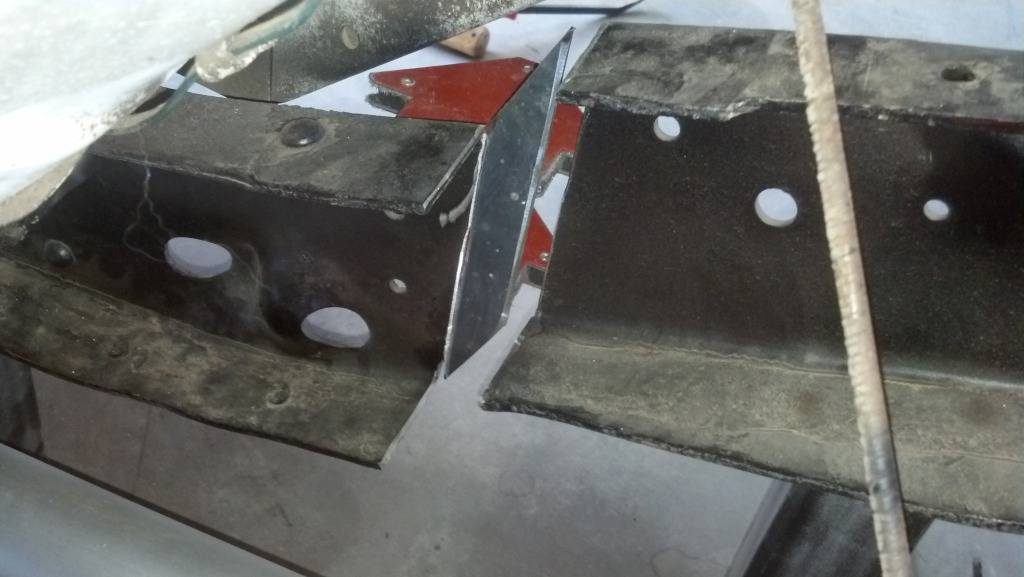 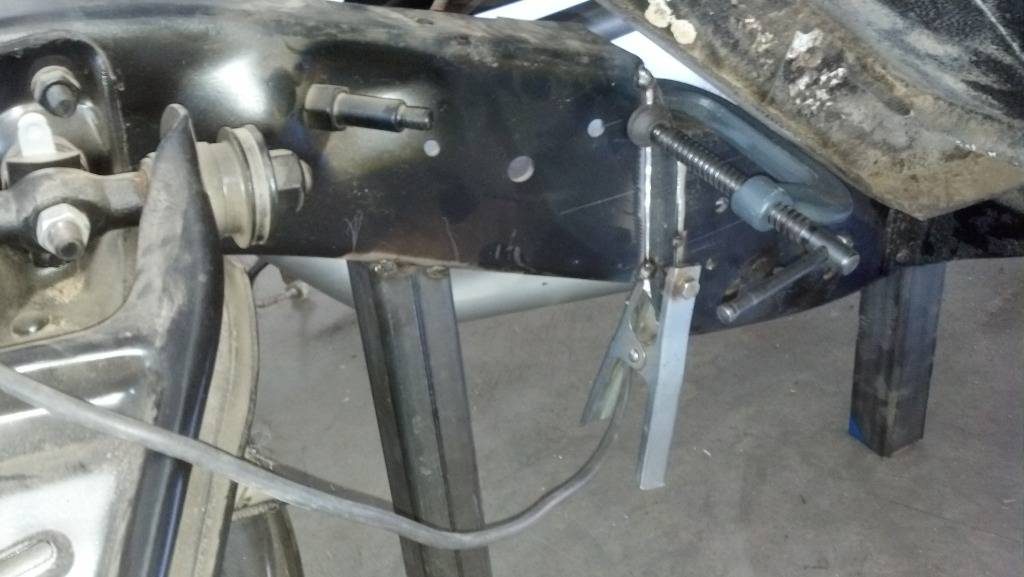 Once the frame sections were tacked together, everything was cross measured. All the dimensions were dead-on, so it needed to be locked into place. The cut areas were fully welded and ground flush, then boxing plates were made out of 3/16th-inch steel plate for the inside and the outside of the frame.  When it was all completed, each of the cut areas had three pieces of fully welded 3/16-inch plate. The frame was now much stronger than it was before. 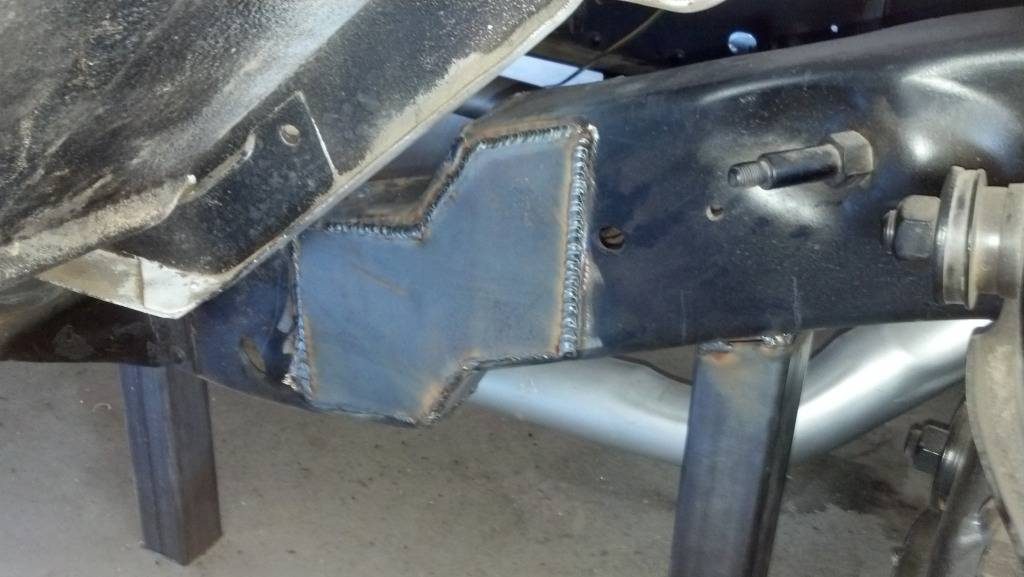 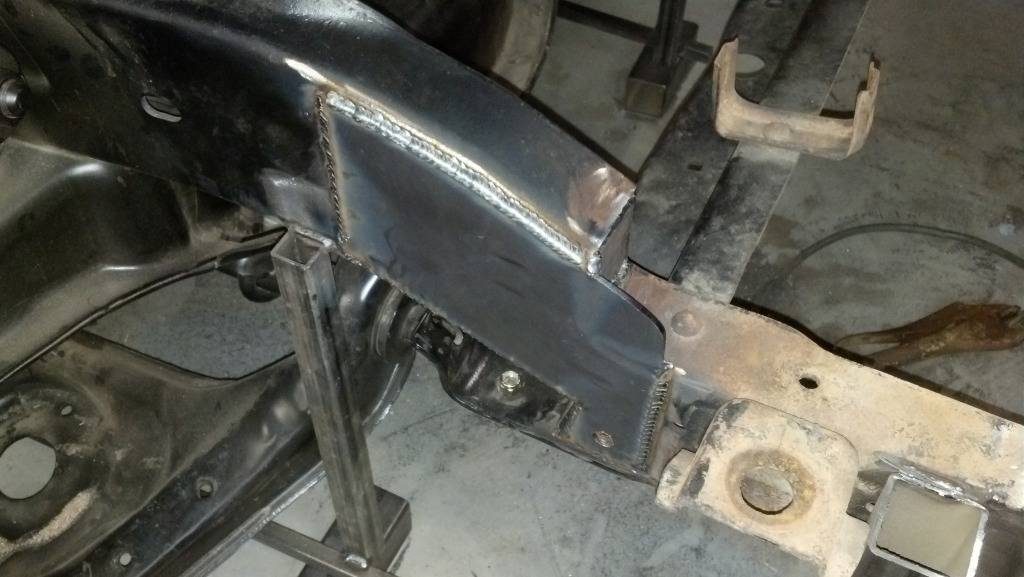 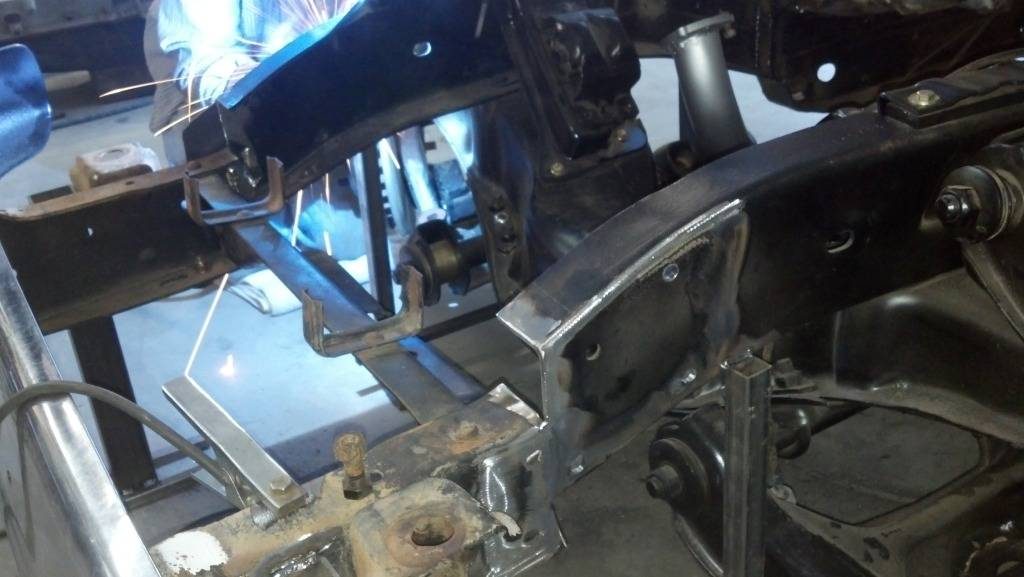 Now that the front crossmember was two inches higher, that meant that the engine mounts were up the same amount. I was planning to run a mechanical fan and stock radiator shroud, and with the engine two inches higher, it was not going to work. The engine had to be lowered two inches to keep everything in alignment. This also eliminated the need to build a taller transmission tunnel inside the cab. It also meant that I could still use a stock style transmission crossmember and mount. The old 1964 motor mounts were swapped over for the later model clamshell-style mounts out of the donor 1979 Suburban. Then, two inches were removed from the mount brackets and the lower holes were relocated and drilled.

Also, because of the fact that the wheelbase was moved forward one inch to center the wheels in the fender openings, the motor mounts had to be moved one inch to the rear to keep the engine in it’s original location. Disregard the groovy green clamshells, I got them from a guy who painted his entire engine engine that color. Yeah, it was ugly… 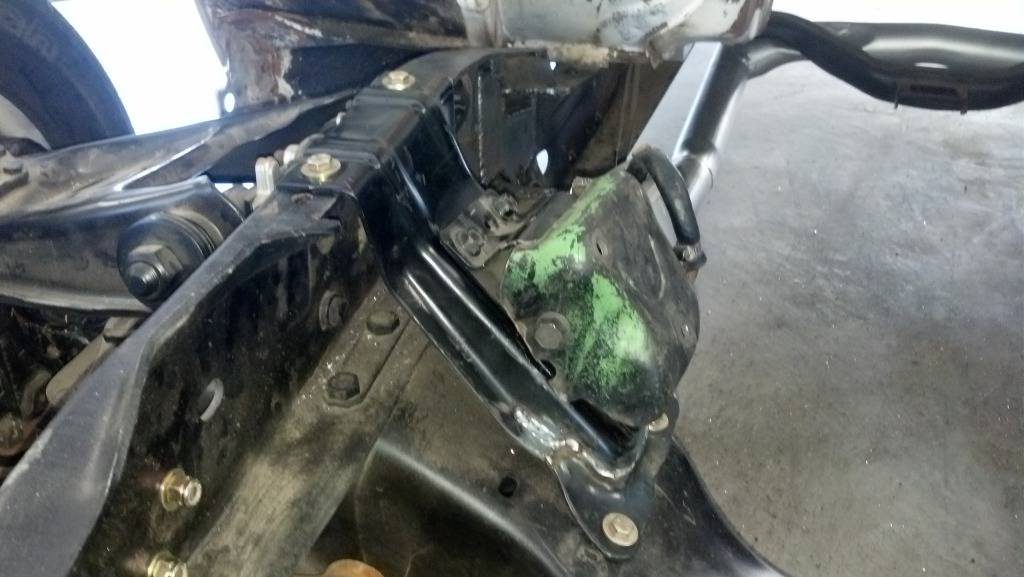 The steering box from the donor Suburban was bolted back into place to verify that it was in the correct position. It was important to get the stock steering linkage to work correctly, so I installed it completely. I immediately came to the conclusion that the ’79 Suburban frame was taller than the ’64’s frame. I discovered this when I went to attach the drag link to the frame. With the steering linkage leveled and perfectly in-line with the tie rods, the drag link was way too low. This was remedied by drilling another hole in the link and attaching it to the frame with Grade-8 bolts. 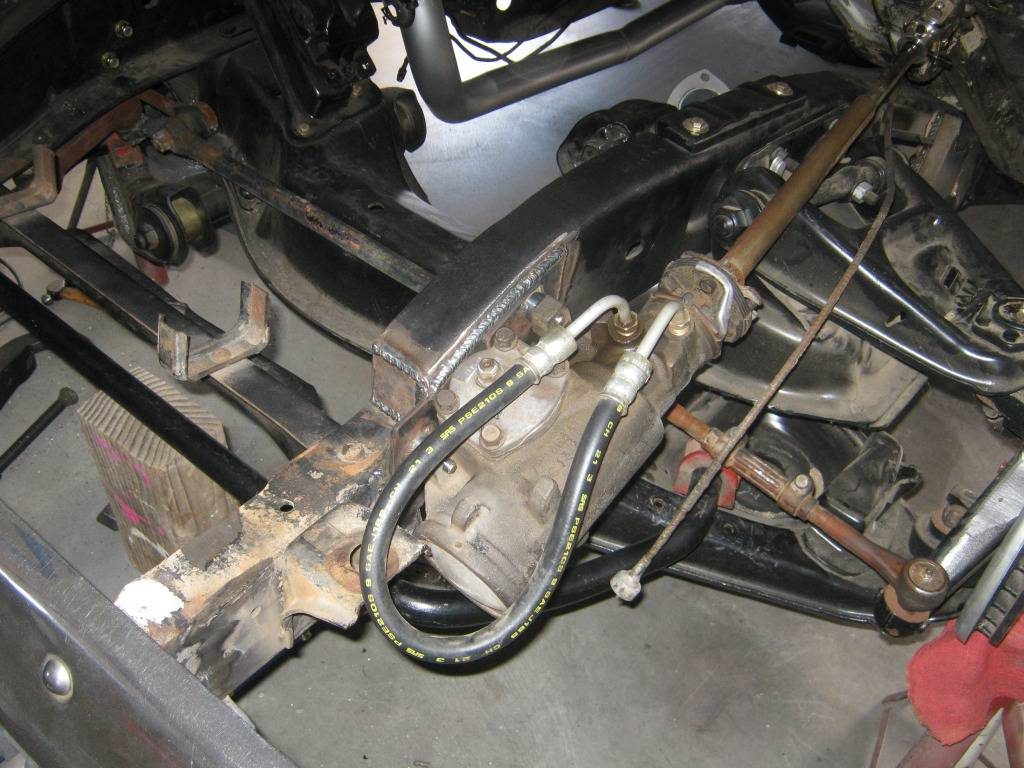 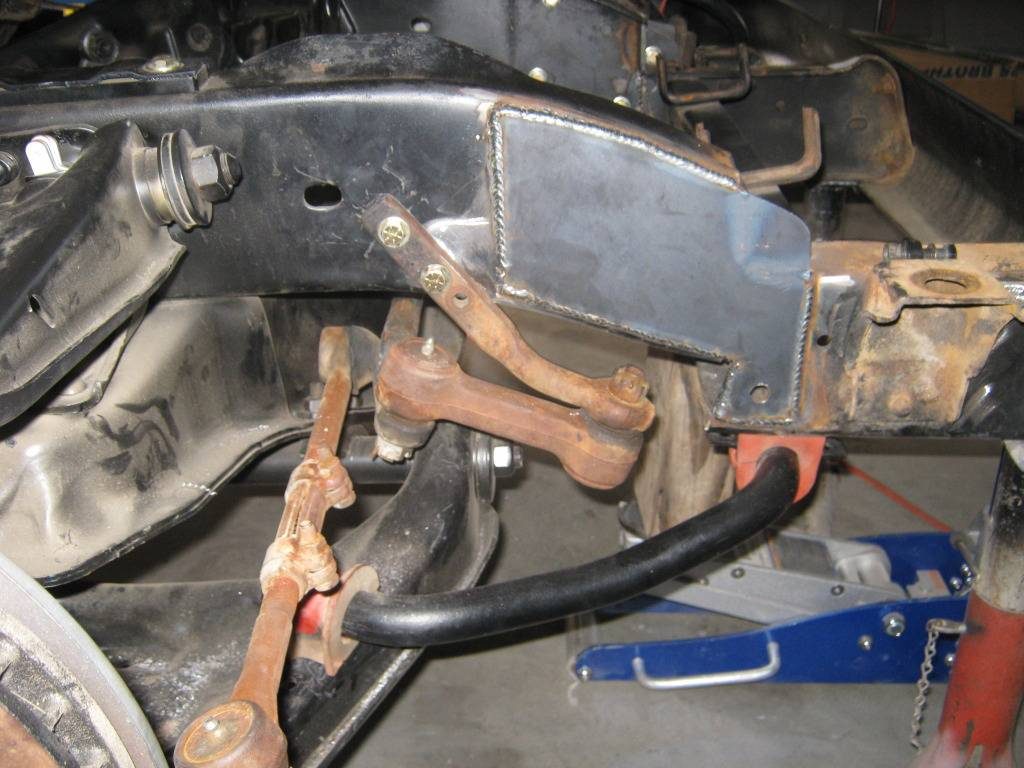 I got a 1.25-inch diameter front sway bar out of a 1975 Chevy Dually because I wanted the truck to handle well. I mocked it up with the old bushings and determined that the original 1964 sway bar mount stands were not going to work. They were too tall, causing the sway bar to sit at a downward angle because the crossmember was now two inches higher than before. I ground off the attach rivets and removed the brackets and bolted the bar directly to the frame. Because the bar was now resting at the edge of the area that was just “Z’d,” I made a pair of beefy reinforcement plates to strengthen the area even more. 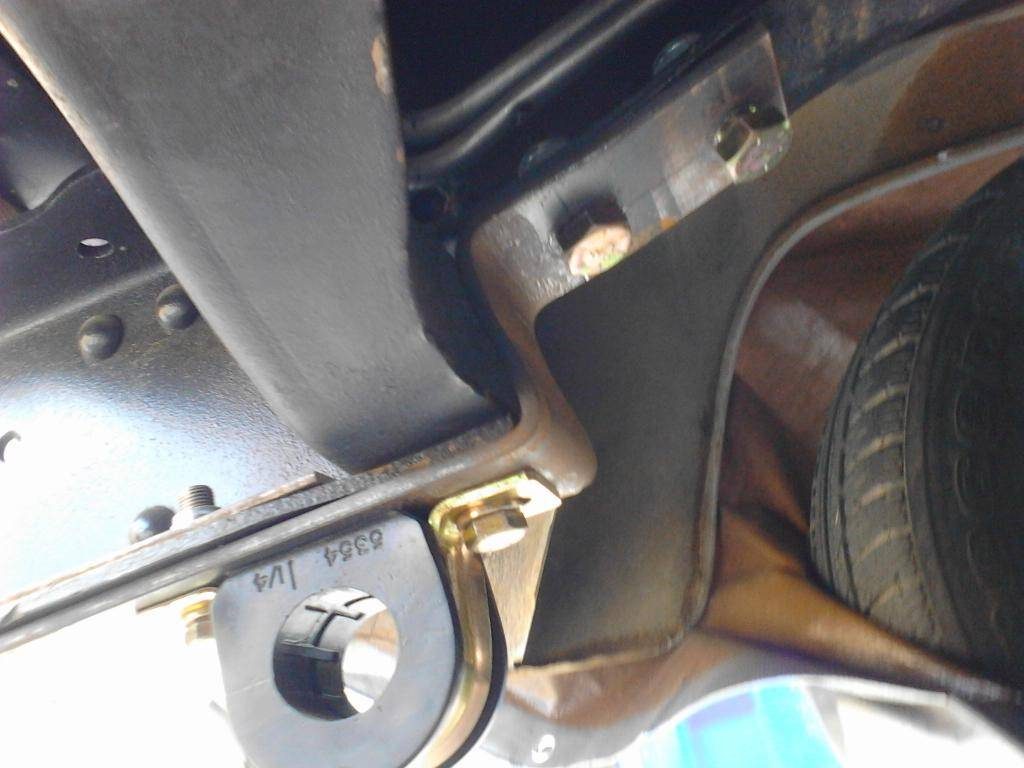 YOU CAN’T BEAT THE PRICE

When it was all said and done, the cost of this job was time and about $15 in 3/16-inch plate. The other benefit was that I was able to get the ground clearance I wanted using stock parts that I can buy at any local parts store.  I’d call that a WIN/WIN.

I want to give a HUGE thanks to Brad King and Bob Larsen for all of their hard work on this mod. I guess whenever Brad gets his ’60-’87 Chevy truck in the future, I’ll have to steal it and return the favor! It’s a Piece of Cake!

In the next episode, it’s time to start getting the chassis looking nicer and the firewall repaired and painted.  Things are going to start coming together for the last and final time, and it all has to look nice. Lots of small details, which bring big headaches!  See you then!

Episode Forty: The Year in Review