Welcome to Part Seven of the Project White Trash series; an on-going story highlighting the resurrection of a 1964 Chevy C-10 truck that was rescued from the scrapper.

In the last episode, I was in a quandary about what wheels to run on the truck. Once I had finally decided on the style, the real work began. Part of the vintage look I wanted meant having to find a very specific wheel. After a lot of searching, I found a pair of 15×8.5 rear wheels in Utah that were in poor shape. I showed how I repaired the damage and then gave them a complete makeover. The end of the last episode showed a sneak preview of the restored wheel under the rear of the truck. I also mentioned that the rear axle housing was going to have to narrowed to make it all work. That’s where this episode picks up. 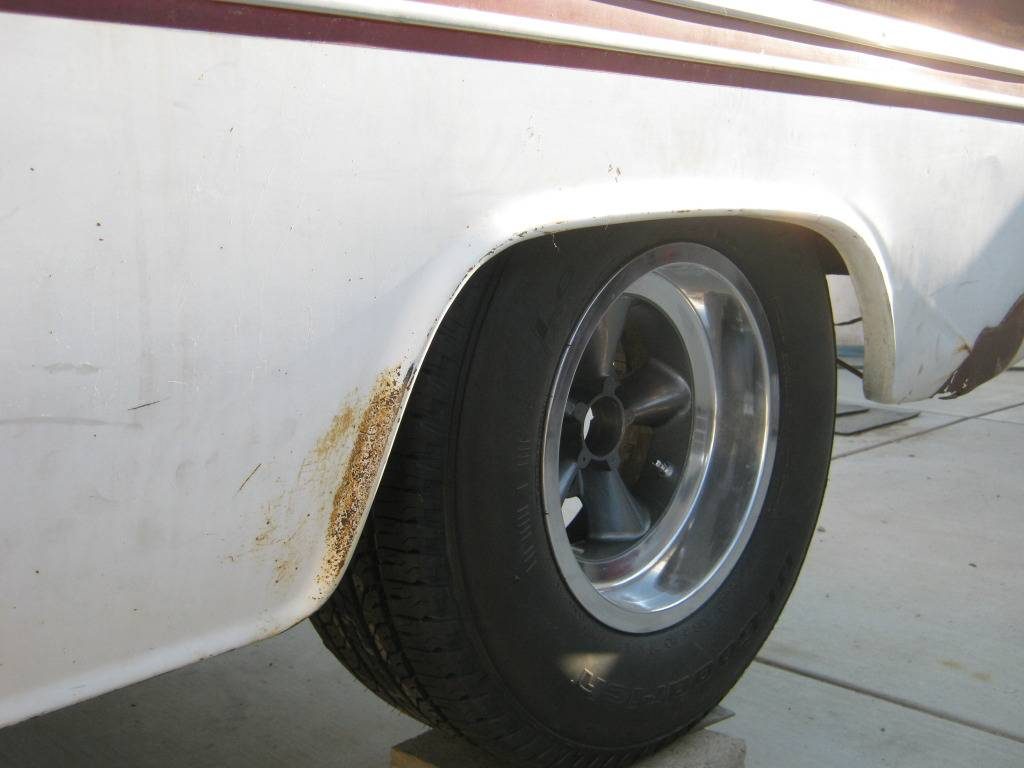 In Part 6, I spent a bit of time explaining the differences in the rear axles of the 1960 through 1987 trucks. If you recall, I wound up using the 12-bolt axle out of the 1979 Suburban parts truck I had. That 1979 axle is 1.5-inches wider in total width than the stock 1964 axle that I removed. The ET Super rear wheels that I restored were 8.5-inches wide , and with a 3.0-inch backspace, they were too wide to fit under the truck. With the rear axle completely removed, I mocked up the new rear wheels in the position I wanted. Then using a tape measure, I measured the distance between the two mounting surfaces on the backside of the wheels. The measurement was 60.5-inches, exactly 3.0-inches less than the width of the stock 1979 Suburban rear axle. That settled it, the rear axle was going to get narrowed 3.0-inche.

CALLING ON A FRIEND 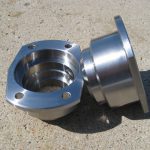 I consider myself to be very fortunate to have talented friends. One of those friends is Rob Lindsay, who owns RJ Fabrication in Hesperia, California. Through the years, we have always traded work with each other. I would help out in his shop whenever he needed a hand, and he would always return the favor. This time, he agreed to narrow the axle housing for me. He has done countless jobs of this type, and has all of the proper jigs and tooling to do it right. I stripped the axle down to the bare housing and got it as clean as I could. Rob suggested to upgrade the stock housing ends to the larger Ford 9-inch style while we were at it. They are not only much beefier, they also have a larger axle bearing that is superior to the stock Chevy unit.

Rob locked the housing jig in place and set the total width to 60.5-inches. He indexed the 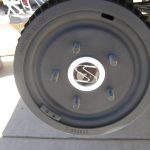 housing ends and welded them on, along with the trailing arm axle perches. Rob is a dealer for Strange products, so he ordered up a pair of custom length 30-spline 12-bolt axles. Once they arrived, he reassembled the gear set using new bearings and crush sleeve to get the pinion set just right. I installed new axle studs and the rear end was done. I can’t thank Rob enough for all of the work he did. Check out RJ Fabrication on Facebook or Instagram to see the incredible high-end work that they do everyday.

Now that the rear axle housing was a total of 3.0-inches narrower than stock, the original rear brake “hard” line was too long. I never liked how the original brake lines ran on the 1960-1966 trucks. The rubber flex line is so long because the suspension has a long travel, and it requires a long, floppy brake flex hose to compensate. I thought for a while about a different method and came up with a plan. I was going to run the brake line down the driver’s side trailing arm, with a tiny flex hose at the forward crossmember.

The area where I wanted to place the bulkhead fitting was right where two layers of metal were, so Brad chucked the trailing arm in the mill and spotfaced the area. 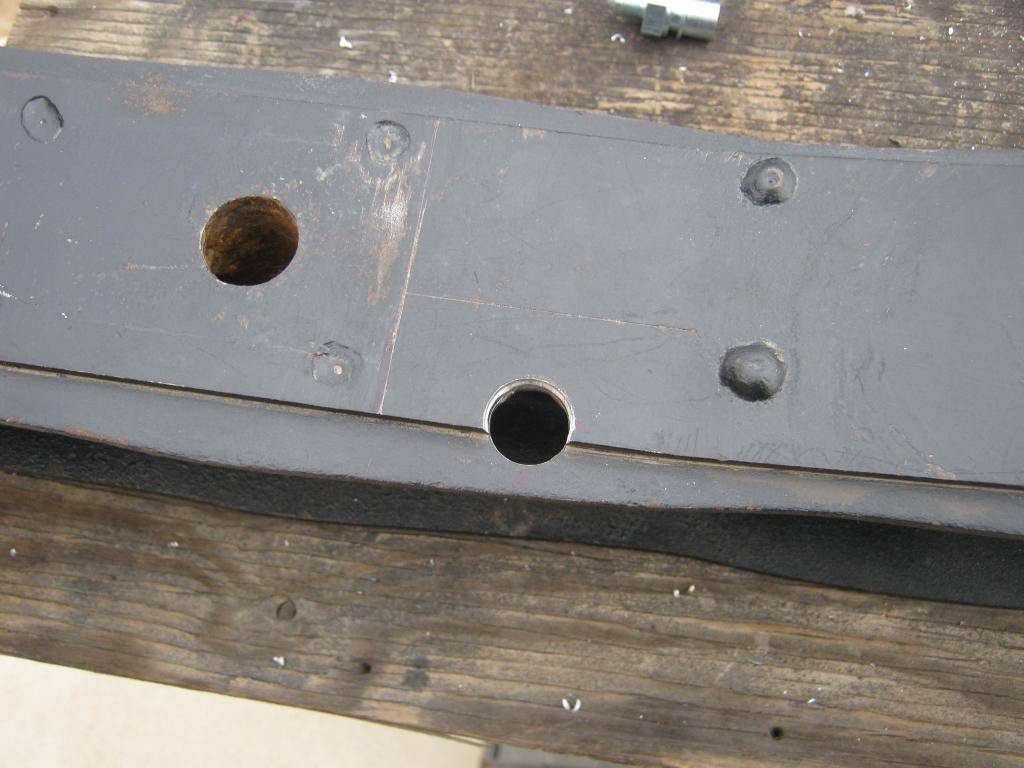 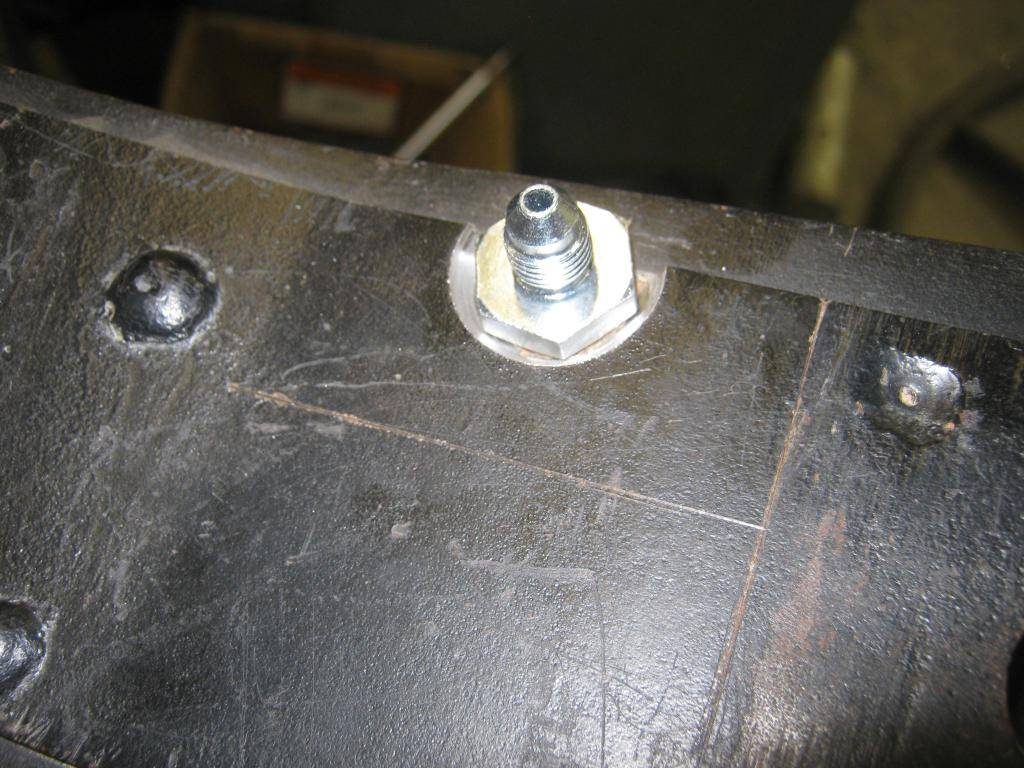 Because of the thickness of the metal, there wasn’t enough of the bulkhead fitting coming through to engage the holding clip. The fitting went on the lathe and the hex section was milled down to the thickness of the trailing arm. Problem solved. You can see the difference between the modified fitting and the stock fitting. 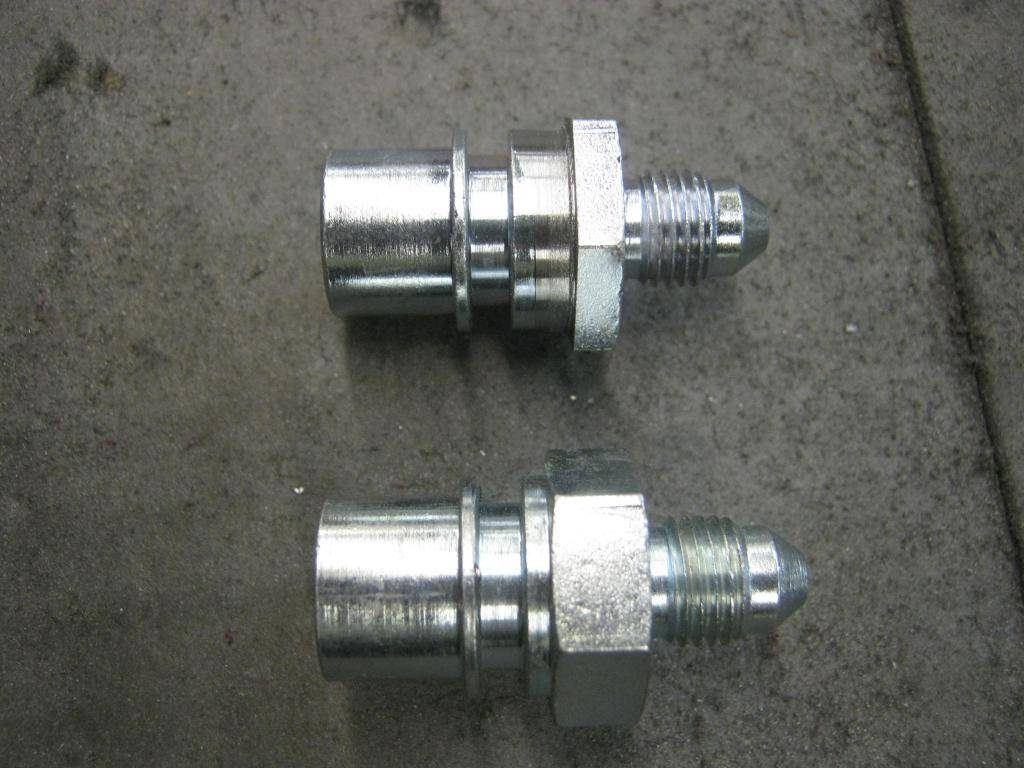 I then went to the forward end of the trailing arm and determined where I wanted the flex line to hook up to. Then, I bent up a bracket and bolted it to the arm. 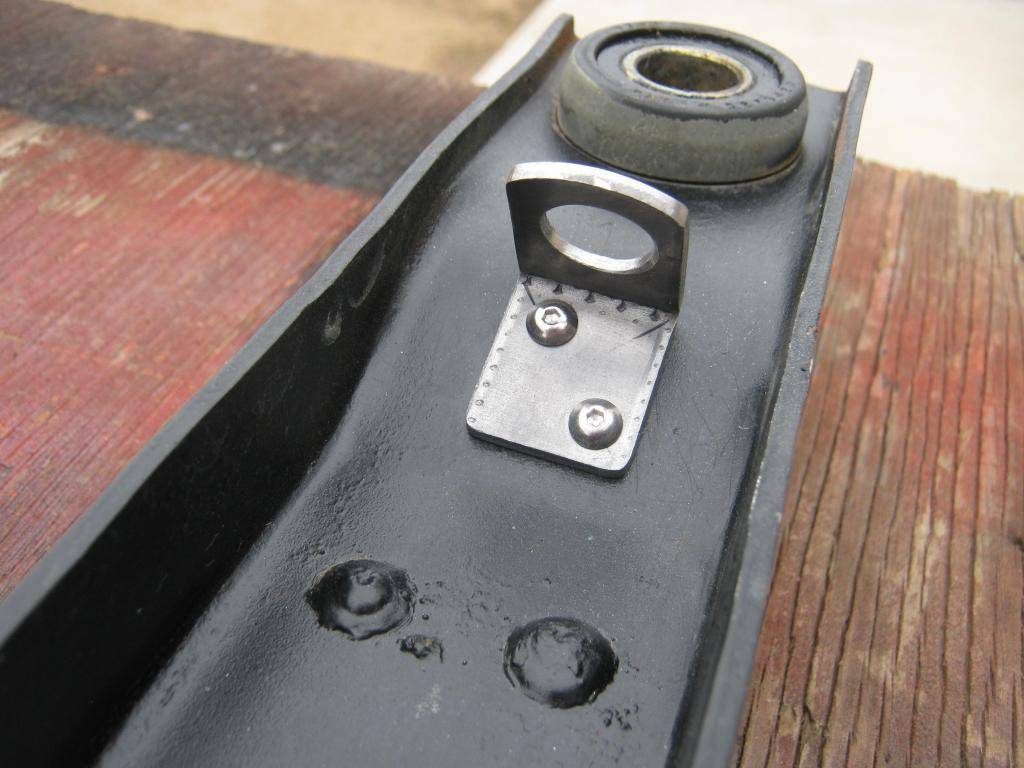 I then bent up a brake line that followed the contour of the arm, secured it with clamps and standoffs, and then attached it at both ends. 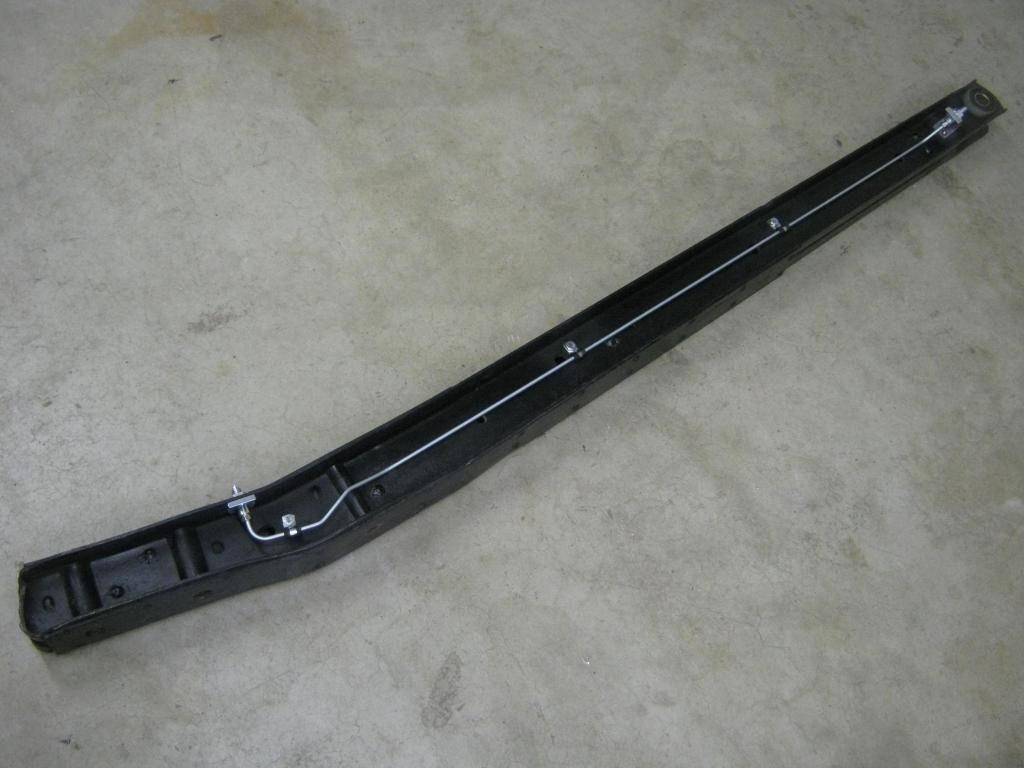 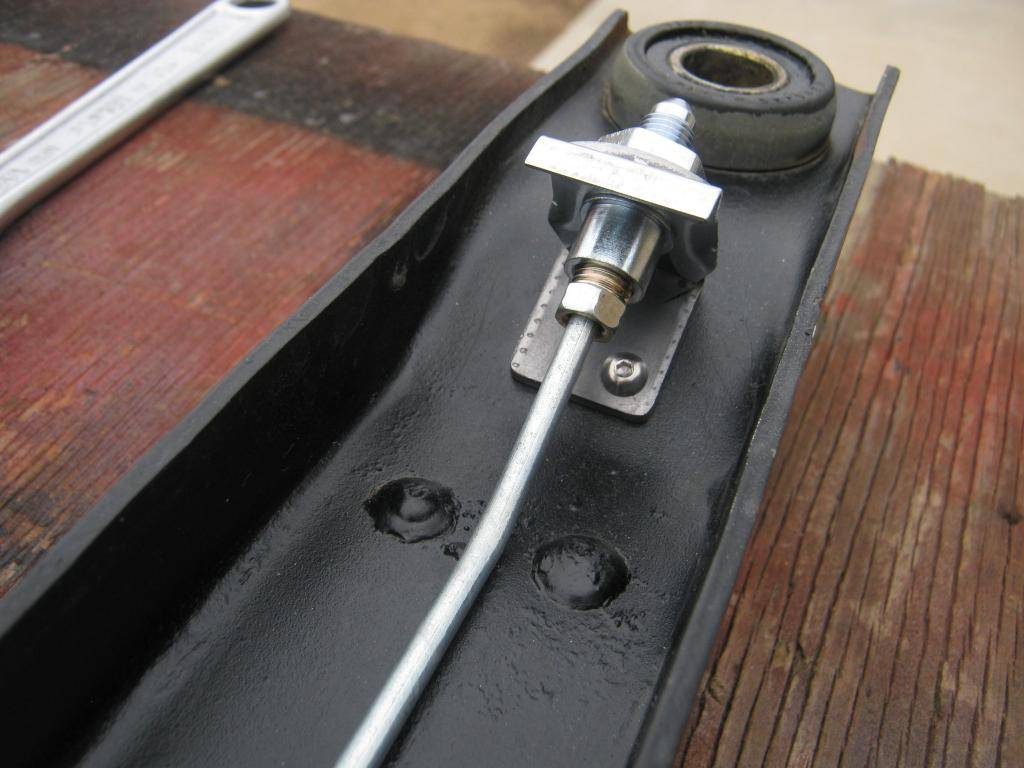 FINALLY BACK ON ITS WHEELS

Now that the suspension was getting really close to going back together, I did the math and determined that I was going to need a 5-inch lowering coil in the rear. In the future, I knew that I was eventually going to go lower, but the 6-inch drop coils have essentially no spring rate and ride spongy. I figured that I could go with a 5-inches and then put in a lowering block to get it to it’s final position. As luck would have it, I found a pair of CPP 5-inch drop coils on Craigslist for nearly half of what they cost from the vendor. It was time to see what it was going to look like with the lowered suspension and new wheels and tires. 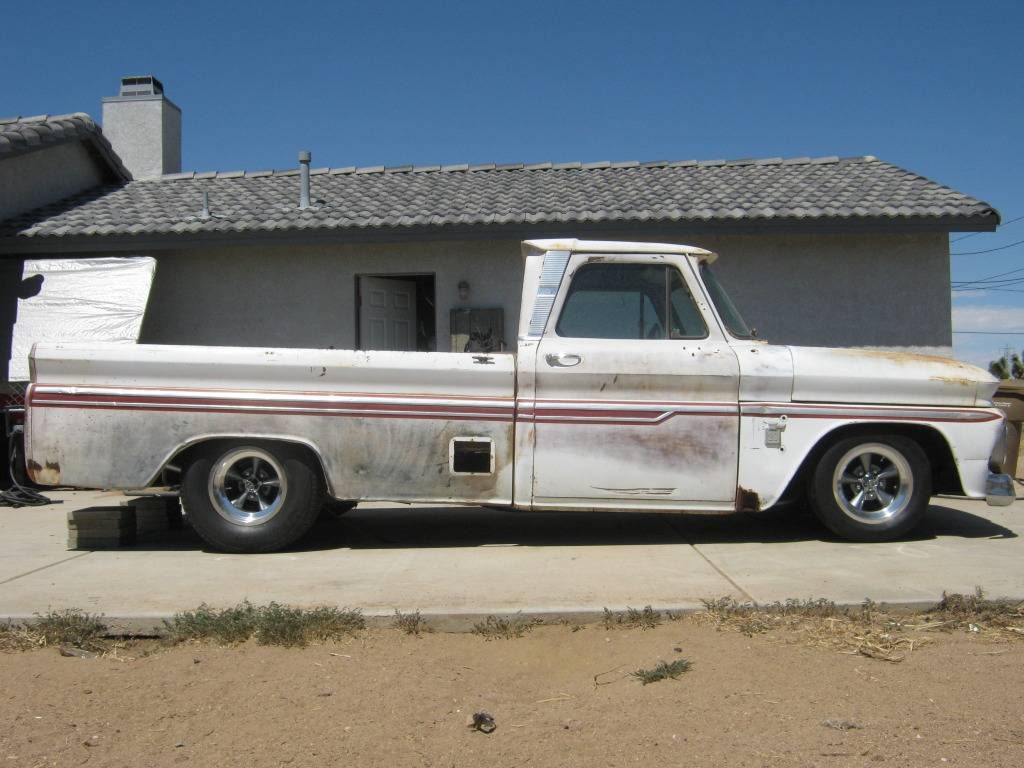 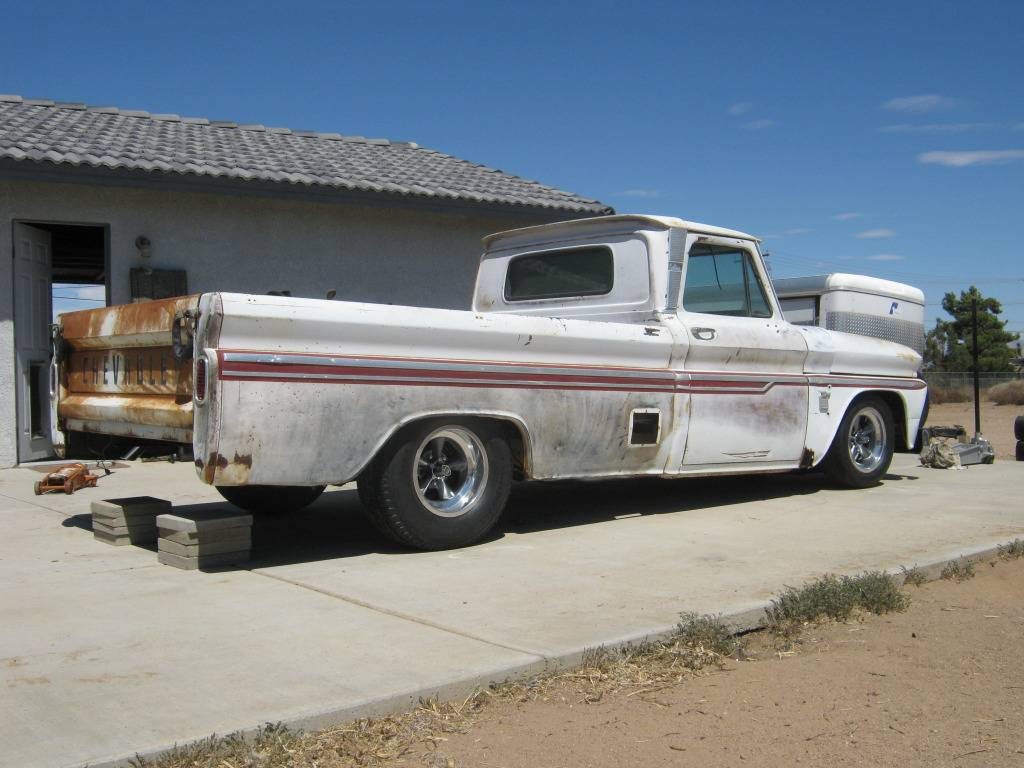 A GREAT START, BUT STILL MUCH MORE TO DO

The results were worth every bit of the work! The rear was still about 2-inches too high from where I wanted it. That would be addressed later. There was another thing that was driving me crazy. Every time someone lowers a 1963-1987 GM truck more than 3-inches, it moves the front wheels back in the wheel opening. Once you notice it on one lowered GM truck, it’ll stand out on every lowered truck you look at from that point on. In my mind, it had to get fixed.

Brad had been on me for for awhile to try a lowering method for cheap on the front suspension that would give me the ground clearance I desperately needed. It’s not for the faint of heart, and he wanted to fire up the cutoff wheels and get going. I wanted to do my homework on all aspects before I stepped into something that, if done wrong, would turn my C-10 into a parts truck.

I’ll show you what was done in a coming episode.

Simple is Hard to Do: Steve Cook Creations