WIDTH IS WHERE IT’S AT

Zane Cullen of Cotati Speed Shop was our guest on episode thirty-two of the podcast, and  during that session, we talked just a bit about this monster. It’s a wild 1968 Camaro that entered Zane’s life via his Dad, and was slated to become a project for his wife. 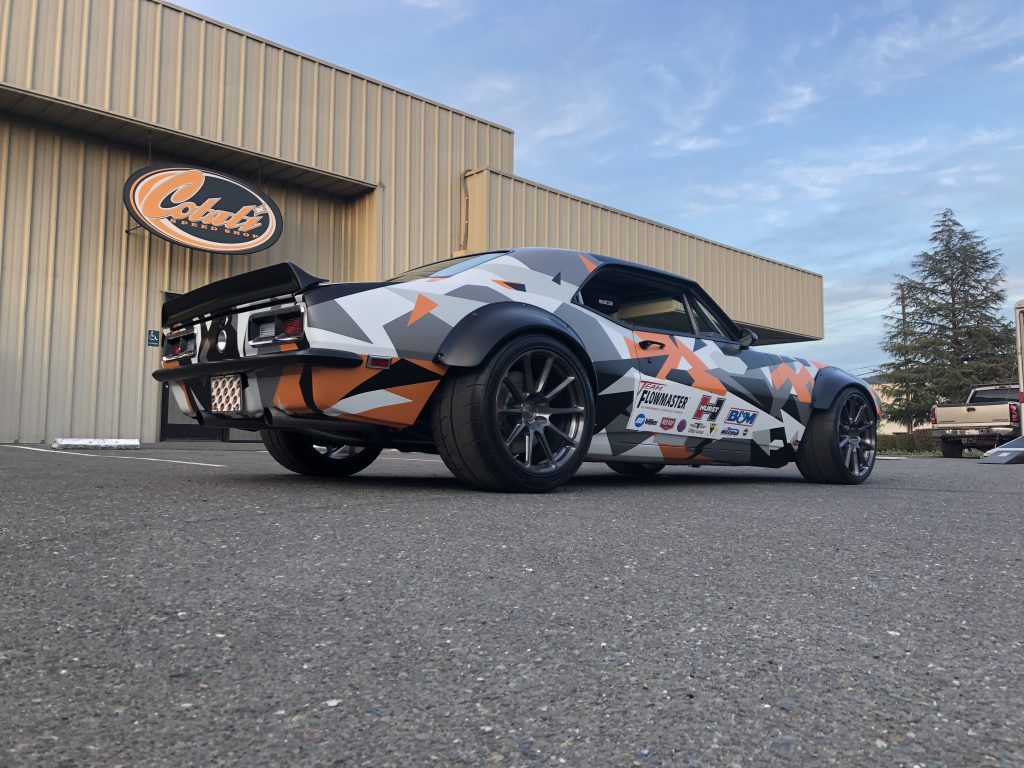 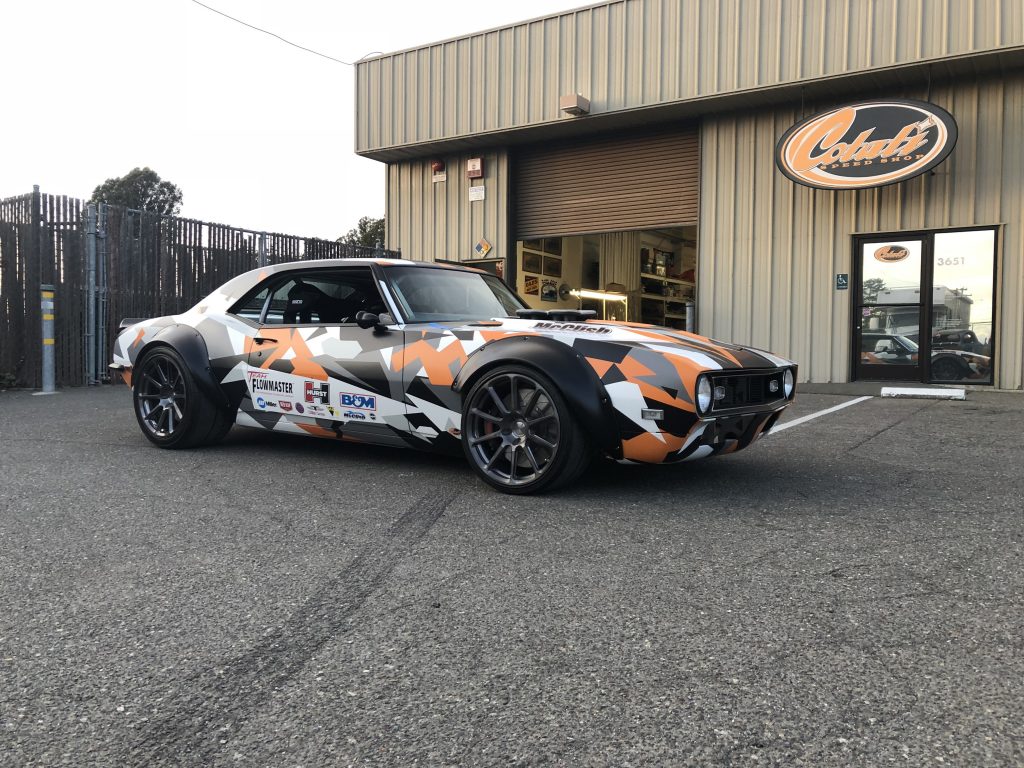 Before we get ahead of ourselves… Let’s step back a bit. 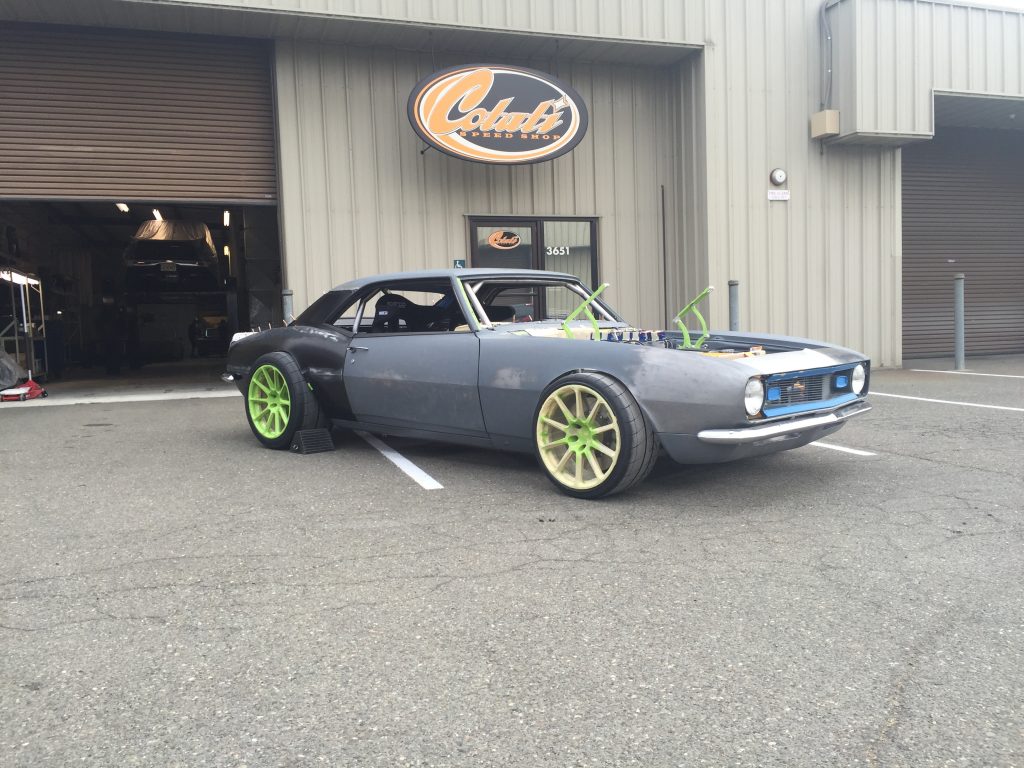 Enter Zane’s longtime friend and client, Mike McClish. Mike and his son Brian race Silver Crown cars (pavement Sprint Cars, for the uninitiated). The pair even have a USAC Championship to their name. Coincidentally enough, the powerplant nestled some eight inches back from the factory location in this first-gen Camaro is the very one they won the championship with. More on that later, though. 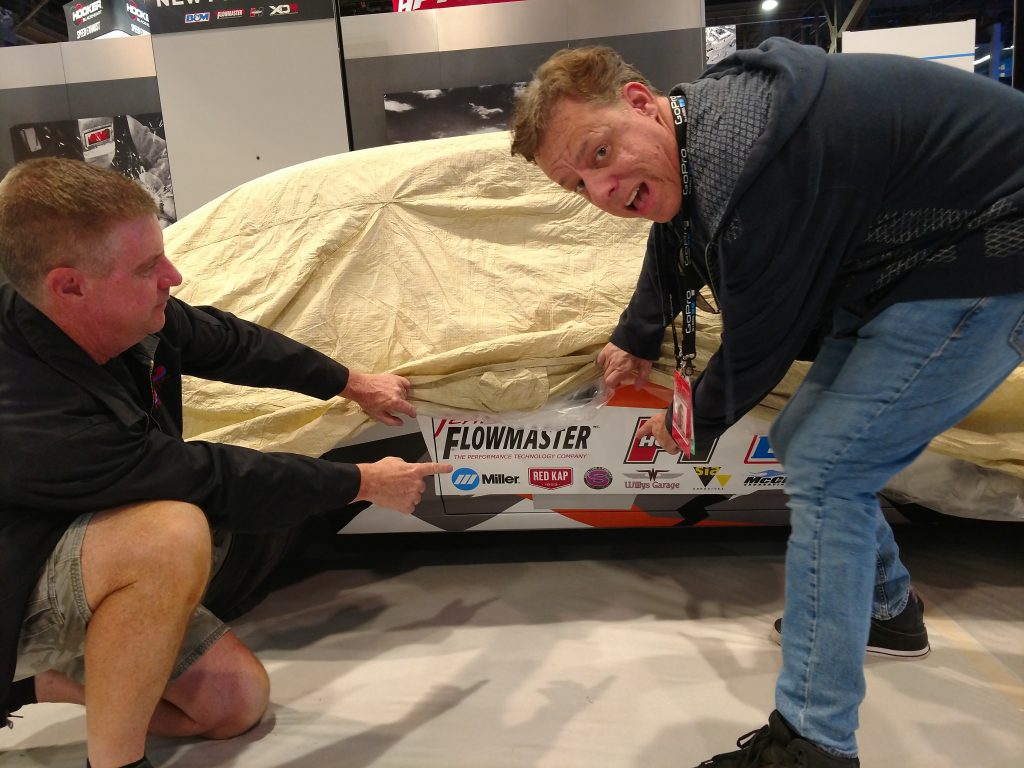 Mike had approached Zane and the crew at Cotati Speed Shop with the idea of building a real Camaro. That in mind, note that as radical as the car is, it’s an all-steel car, running factory-style windows all around. It’s a race car that remains true to its roots in a number of ways. The first thing that might strike you is the low stance and the big-by-large fender flares on all four corners. They offer some extra room for the wide track and big-by-huge rolling stock. The flares are an homage to the 1968 Corvette L88 LeMans racers, and are but one ‘Vette-themed part of the big picture. 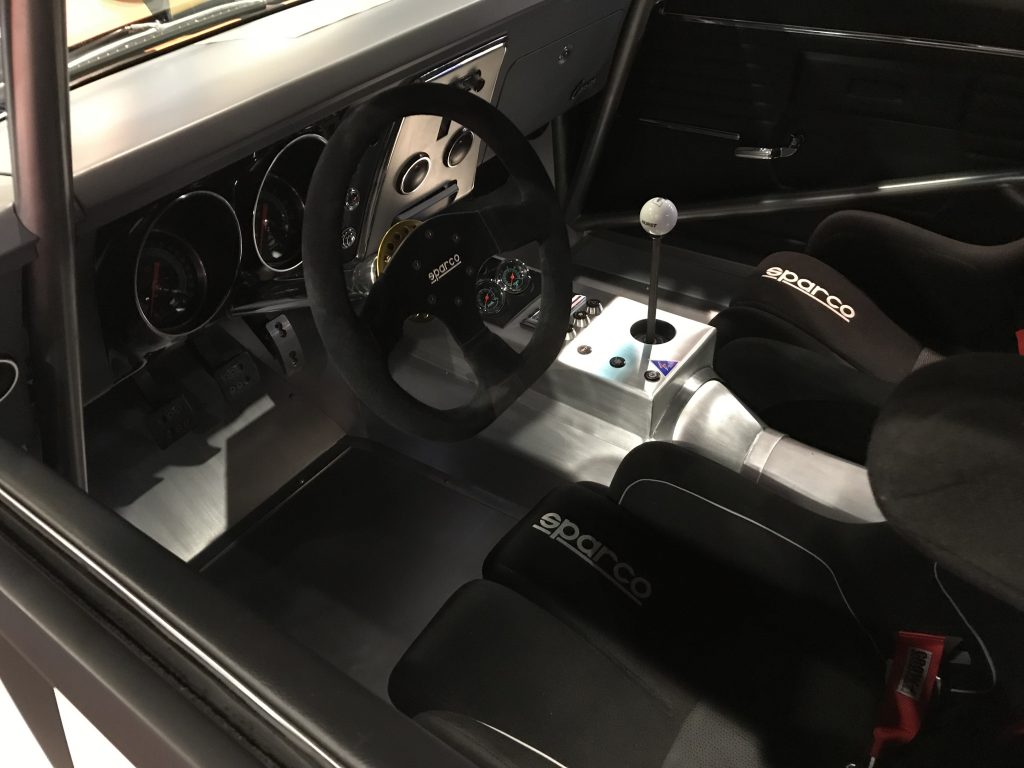 As the project evolved, Mike had wanted the car to have the same footprint as his 2012 ZR-1. But it had to have the same wheel package as a C6.R… A tall order indeed. On the street, the car will run the 19×11 fronts and 19×13’s you see on the car as it sits in the Flowmaster, B&M Racing and Hurst Performance booth (22351), whee it will have debuted on Tuesday at 2:30 PM. Utilizing c6 front suspension, the car sits a half-inch lower than the ZR-1, and with four-plus inches of ground clearance! The run-of-the-mill parts placement heads toward the rear with a standard driveshaft aft of the Holinger sequential six-speed gearbox. And from there, it’s gets a bit more trick. 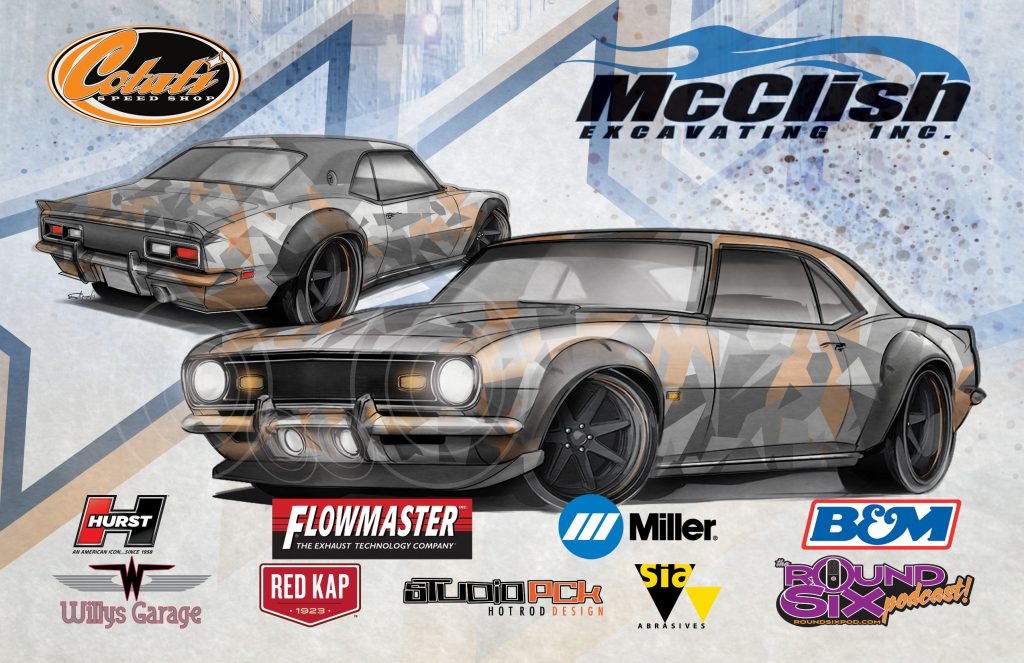 A Holinger center rear differential, as used in the Australian Super Car series holds court in the ever-so-slightly-modified Morrison chassis. This wasn’t a simple bolt-in, but was made much easier in the light that the Morrison IRS set-up is designed around GM-style components, and the Holinger set-up is designed to run under Holden-based vehicles, which share platform with the US GM vehicles. Working closely with Art Morrison Enterprises, the chassis was fabricated to Cotati Speed Shop’s specification, allowing the use of these parts in harmony. Brake components are by Brembo, and the wheels are Forgeline.

The Donovan-based small-block was originally built Shaver Racing Engines, and is the very engine mentioned earlier-on. It was rebuilt by Gaerte Racing Engines, and has been de-tuned from 950HP on alcohol, but still cranks out a more-than-respectable 750HP on alcohol or race gas. It runs a dual fuel system and mechanical fuel injection. The heart of this build, literally and figuratively, the engine stays true to its Sprint Car roots, and sounds incredible…

A build like this is much more than the sum of its parts. And just listening to this monster is an experience all its own… The exhaust is crafted from all Flowmaster components, as is par for the course with all of Cotati Speed Shop’s builds (as well as my personal project here on the site). The shop has a long history and partnership with the exhaust giant, and Flowmaster developed  custom muffler to spec for this project.

While it’s a Camaro, it’s one highly-modified 1968 Camaro. The exterior length remains sock. But the added width of the wheel well flares and low-down stance make the car look completely radical. The Corvette LeMans-inspired flares and remainder of the widened first-gen is covered in a geometric, camo-look wrap designed by Brian Stupski of Problem Child Kustoms Studio, and was executed flawlessly by Joe and the team over at Wraps N Motion. It’s a bold statement, and certainly grabs your eye. 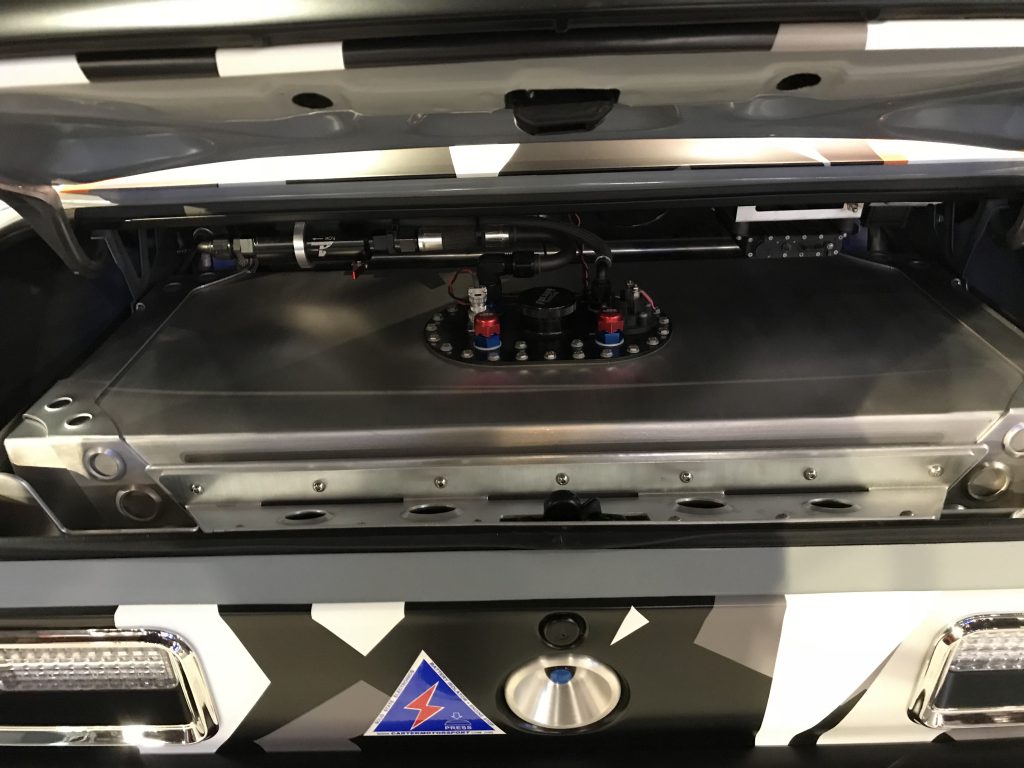 What you may not immediately notice, though, is the radical engine setback. This necessitated bringing the dash back quite a bit. The dash is fully removable for future servicing. the full cage was engineered and designed to be unobtrusive for this particular feature. A ton of work has been done on the interior, and much of this is the handiwork of Cody Swinehart of QuarterTilt Metal Co., and if you’re not following him, follow that link and do so. And the project would not be where it’s at without the skilled hands of master craftsman Jeff Ryder. The car is seriously a who’s who of the fabrication world in Northern California.

A huge tip of the hat goes out to the entire Cotati Speed Shop crew for pulling this one off, and making it available to be seen at the SEMA Show this year. We will be closely following this build. Be sure to stay tuned right here on the website for lots more!

GET TO THE SHOW, ALREADY!

The car made its grand debut Tuesday, October #22351 in the Flowmaster Mufflers INC., B&M Performance & Off-Road and Hurst Performance Products booth, and we were there.

The SEMA Sow debut of the Mike and Brian McClish-owmed, Cotati Speed Shop 1968 Camaro. Tim Strange manned the mic for the debut, and Zane Cullen, owner of Cotati Speed Shop gives the lowdown on the build and some of the highlights of the car. 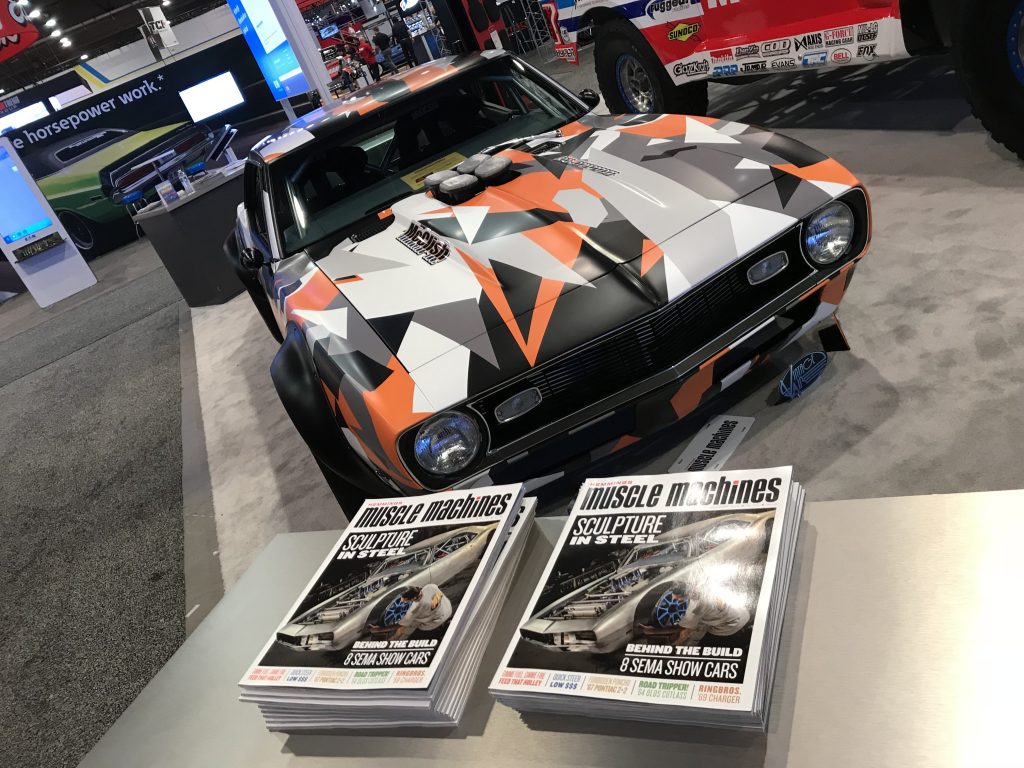 Special thanks to Earl’s Plumbing for the hundreds of fittings and superior-quality components. As Zane says, “we’d have been well-served to have bought stock in the company on this one!”
Also, a big “Thank You” to Ron Davis Racing Products for all of your support once again on this, and so many of the other projects to come from Cotati Speed Shop.
We’d be remiss if we didn’t mention the quality products sourced from Forgeline Wheels and Brembo for braking. 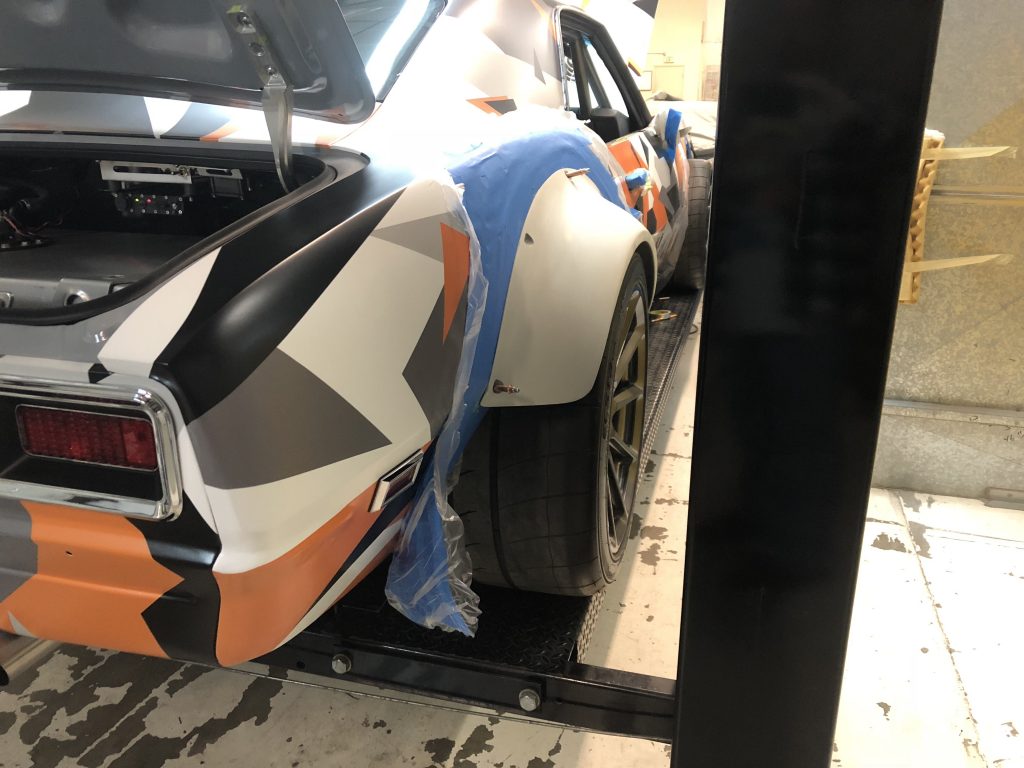 Going deep into the fun stuff.