Welcome to Part Six of the Project White Trash series; an on-going story highlighting the resurrection of a 1964 Chevy truck that was rescued from the scrapper.

In the last episode, I detailed the process of removing the old antiquated Eaton H052 rear axle and replacing it with a 12-bolt axle out of the donor 1979 Suburban. If you recall, the ’73 and up 12-bolt rear axles are wider than the stock ’64 axle that I removed. They are a total of 1.5 inches wider, in fact. This wider total width wouldn’t be an issue at all if I wanted to stay with a rear wheel that was 8″ or narrower. I like a wide rear wheel with a shallow backspace, and that was going to be an impossibility with this wide rear axle. I was going to have some tough decisions to ponder, and none of the options were going to be cheap.

My vision for this truck from the beginning was for it to have a 1960s vibe. That means a vintage wheel in a 15″ diameter. There are a few manufacturers out there making copies of vintage wheels, such as American Racing with their iconic Torq Thrust. The problem was, my truck has a 5×5 bolt pattern, and that limits my rear wheel width to two sizes and my backspace choice to just one. I can go with an 8.5″ or 10″ width, and both of those sizes only come in a 3.75″ backspace. I came to the one conclusion that I knew was coming. I’m going to have to narrow the rear axle. I’ve got buddies who own chassis shops and have housing jigs, so that part will not be an issue. It’s just that now I’ll be buying new housing ends, bearings, and axles. At least this way, once I decide on a wheel, I can narrow the rear axle to exactly where I want it.

ALL 5-SPOKES ARE NOT THE SAME!

Sometimes, I can be a bit of a trailblazer. Long before the “5-Spoke” craze of the mid-90s, I was collecting vintage Torq Thrusts, Halibrands, and slotted mags. I had deals with all of the local recycling centers and wrecking yards to be on the lookout for ANY vintage aluminum wheel. They would set them aside for me, and I’d usually pay them $15 to $20 a wheel. It was a win/win for both of us, because at that time, “dirty” aluminum was going for essentially nothing. I had stacks of Torq Thrusts and many of the dozens of 5-spoke clones that came along at the same time. I could go into a long discussion about all of the subtle differences between the clones. They may have looked very similar, but there was a HUGE difference in quality. After Torq Thrust, the next best clone in quality was the Appliance brand and the worst was the Fenton. When the 5-spoke “boom” hit in the mid ’90s, I made a good chunk of change selling my wheel collection until they were all gone.

Only then, did I wonder why I had done something so bone headed.

THE ONES I NEED

Most every manufacturer who cloned the Torq Thrust design also copied the dimensions, as well. I say “most” because there were a few who deviated a bit. Crestline made a beautiful 5-spoke in the coveted 10″ width, but good luck finding a pair. ET made an 8.5″ wide wheel that they called a Super that had a 3.0″ backspace instead of the usual 3.75″ backspace. It gave the impression of it being a wider wheel than it really was. THAT was the one I had to find, because not only did it have the perfect backspace, it also was a Uni-Lug. Finding a vintage 5-spoke in a 5″ bolt pattern with an 8.5″ width is like finding an honest politician. The Uni-Lug design gives the user the choice between 3 different bolt patterns, the 4.5″, the 4.75″, and 5″.

I’m not crazy about the Uni-Lug design, but ET beefed up the flange where the Uni-Lug washers rest, and they’ll work just fine on the ’64.

THE PRICE WAS RIGHT, BUT THERE’S A CATCH

I spent about 2 months looking for a pair of 15×8.5 ET Supers. They were stupidly expensive. I managed to find a pair on the HAMB classifieds that were in Spanish Fork, Utah. The price was right, but there was a catch. One of the wheels had a small crack in the lip and needed to be repaired. I bit the bullet and bought them, hoping that I could fix them. They arrived about a week later, and when I opened the box, they were exactly as the seller described. There were broken center cap screws and not only was the lip cracked, it was slightly bent, as well. The wheel had obviously been potholed at some point in it’s life. Time to get to work. 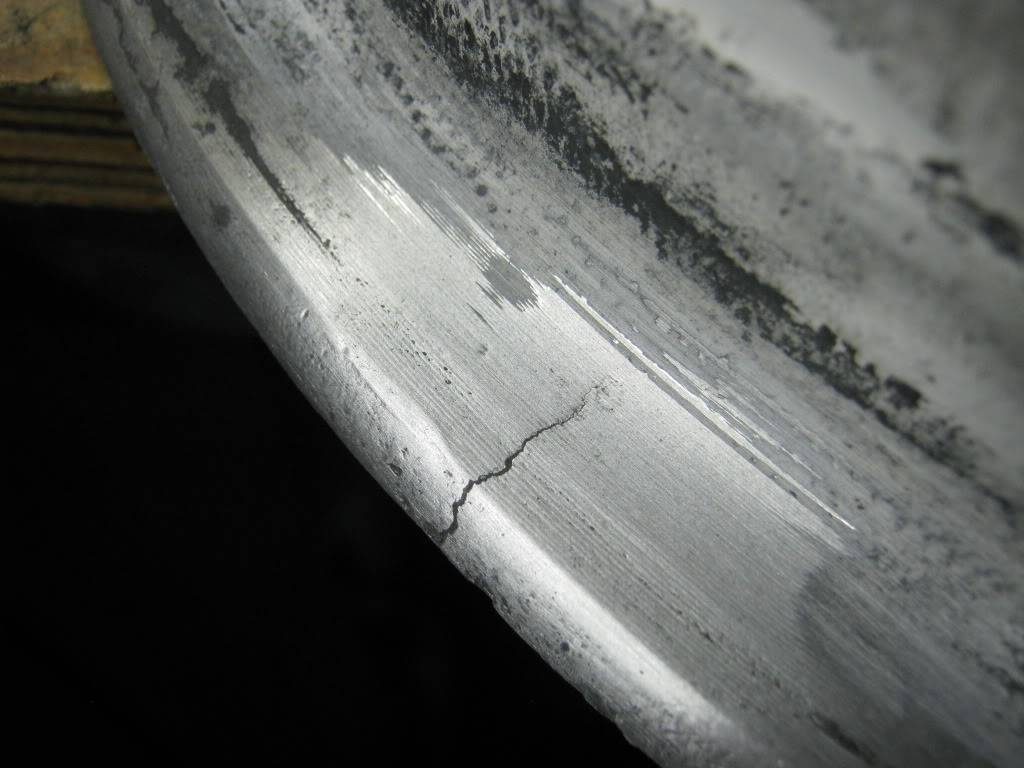 I was able to get the lip straightened out very quickly using a press and light pressure. Fortunately, the bend was outward and not inward, so it went right back into place. I verified that the wheel was true using a dial indicator. I then stop-drilled the end of the crack to keep it from growing further. Using a small cutoff wheel, I ground a trench down the crack on both sides of the lip. My good friend Mike Jones Tig-welded the gap on both sides, and I told him to crank the heat and leave it “proud” because I was going to have the lips re-machined. After the step on the lip was machined off and the welds were flush, the area looked like it had never been repaired. Mission accomplished. 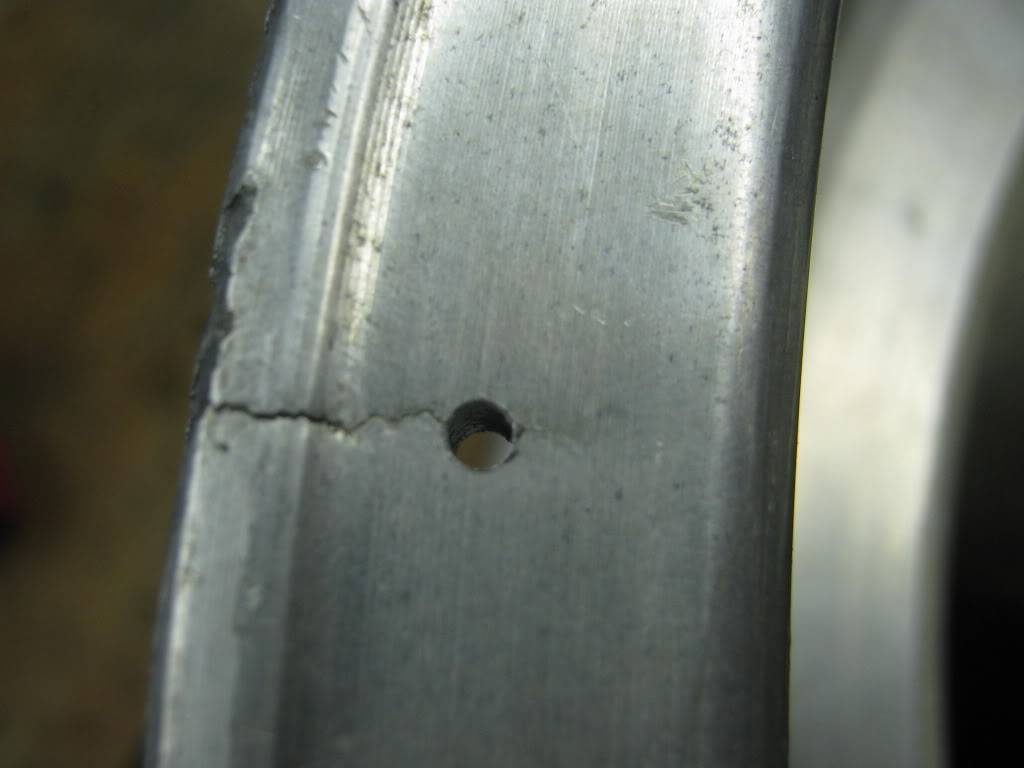 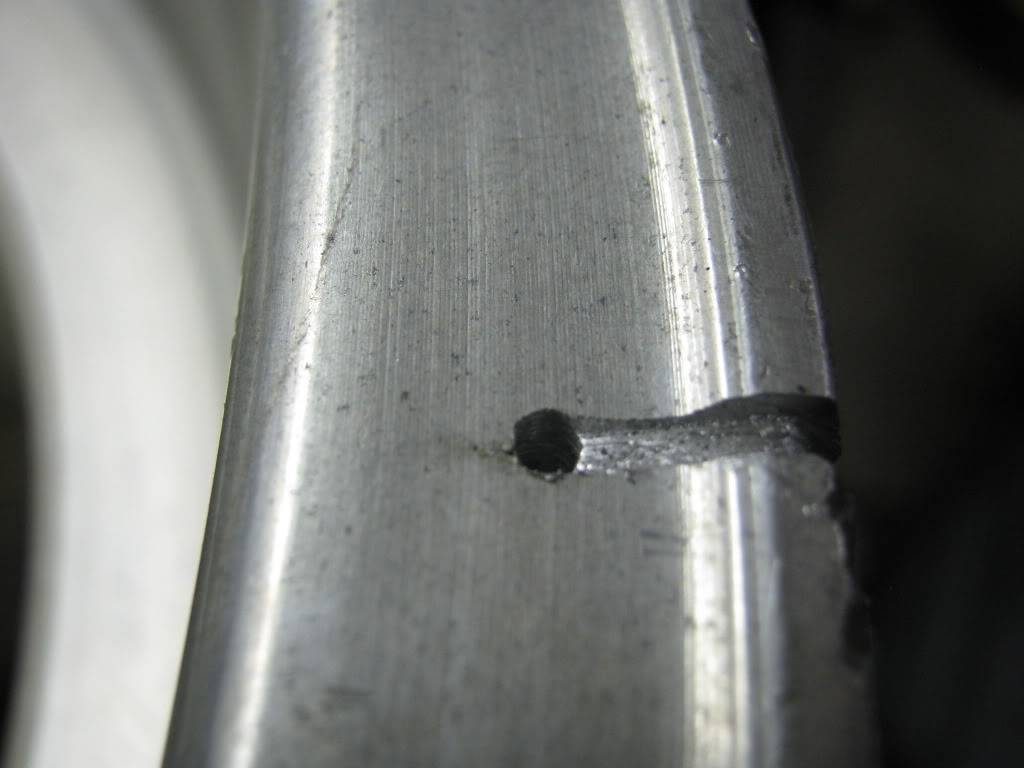 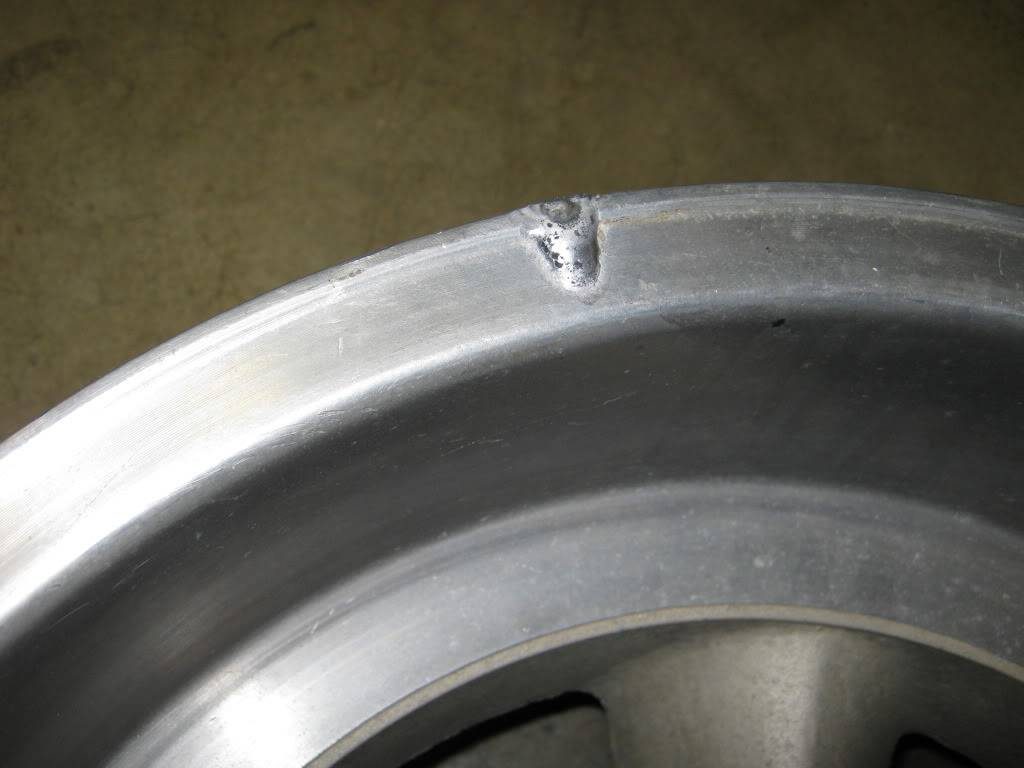 After the wheel was repaired, I drilled out the broken center cap screws and helicoiled all of the center cap attach points. The screws were not fitting tightly after years of being installed and removed, and the helicoil inserts solved that problem. A trip to Brad King’s house to use his blast cabinet made short work of getting the spokes ready for paint. I did not want a fully polished wheel, so the wheels then went over to a polish shop in Hesperia to get the outers polished.

WHAT ABOUT THE FRONTS?

Funny you should ask. The fronts were in my garage all along, bolted up to my ’55 Chevy truck. I was planning a wheel change anyway, so off they came. They were 15″ fully polished ET Supers in a 6″ width. They needed the same prep work as the rears. A few minutes in the blast cabinet and a trip to the polish shop got them ready for paint. 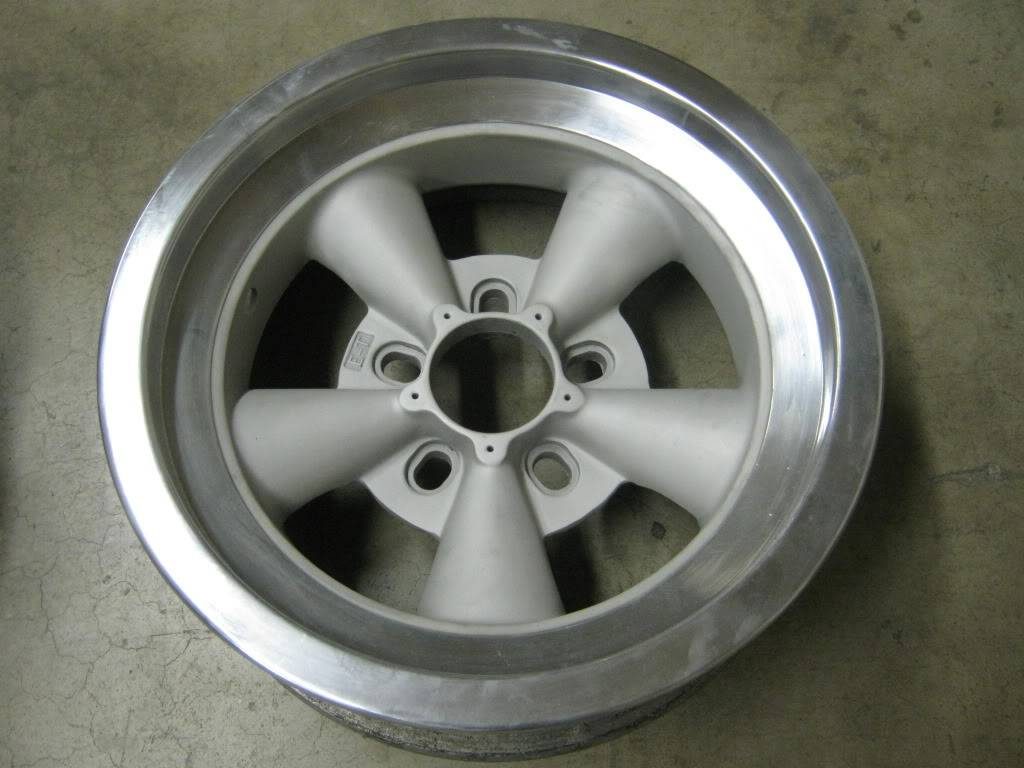 LAYING ON THE COLOR

Brad is always doing custom paint work, so he has a pretty good stash of paint. He had just finished repair job on a friend’s Harley and had some charcoal metallic left over. Add a little tinge of green to the mix, along with a little dash of platinum pearl, and the color was perfect. The wheels were masked off and primed. The color went on and the wheels looked totally different. These previously clapped out wheels looked damn good. I had an NOS set of those funky ET oval center caps, and when I put them on, they totally had the ’60s vibe I was looking for. 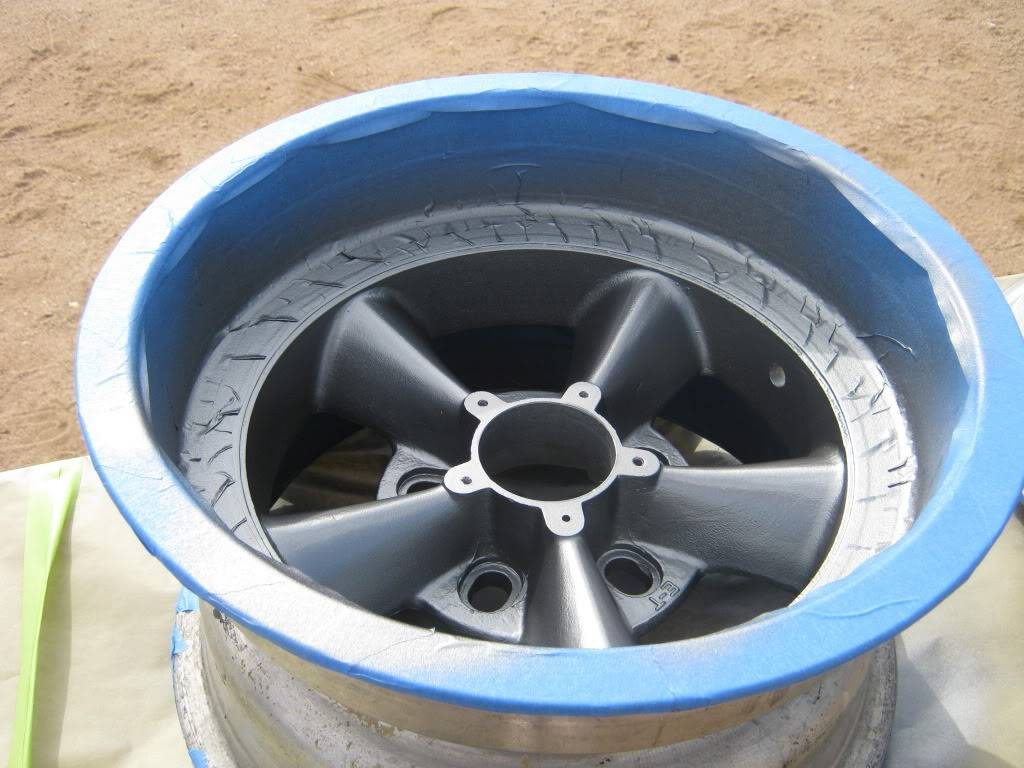 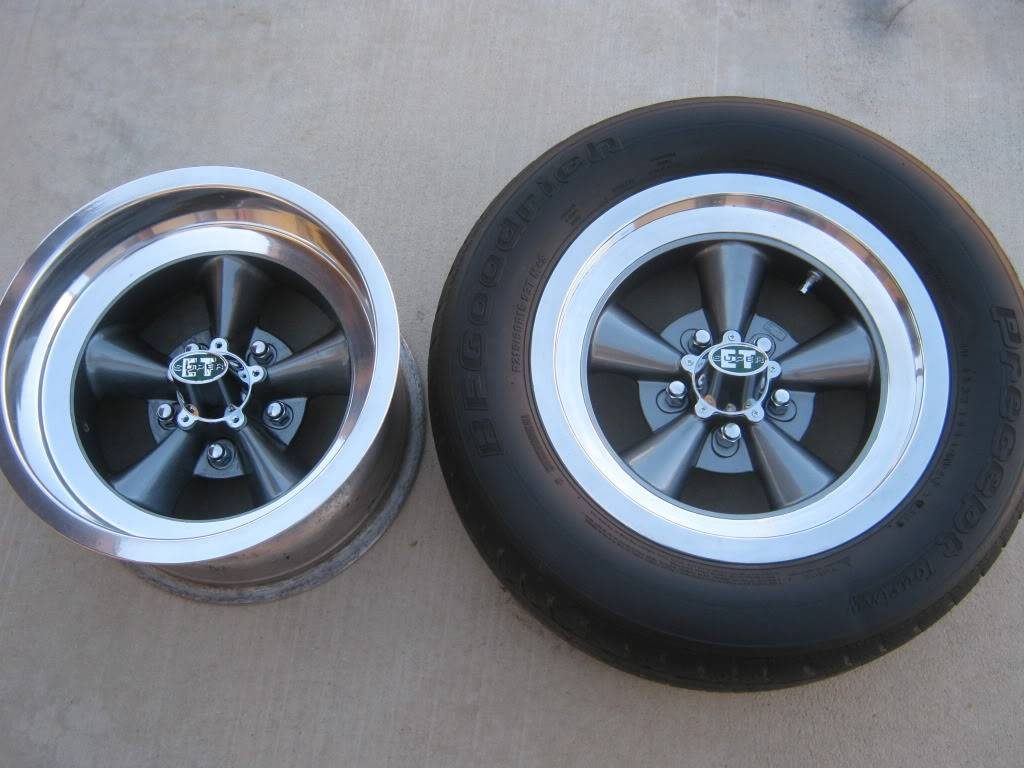 THE SAGA OF FINDING 15″ TIRES

Anybody who has recently built a car with 15″ wheels already knows how difficult it is to find decent rear tire sizes. Gone are the days of the BFG Sport Truck T/A, where you can get the awesome 285 width. Sure, there is one aftermarket vendor who still makes them, but the prices are outrageous. I’m not spending that kind of money, so I settled on a 265/70-15 BFG Long Trail T/A Tour tire. They are 29.6″ tall, with a 10.4″ tread width, and are about a third the price of the aforementioned 285. Brad had a pair of old 215/60-15 T/As that I was going to use as mock-ups for the front, as I still hadn’t decided on where I wanted it to sit just yet.

The rear axle assembly was pulled back out and the rear wheels were put in place. I slide the tires close to the fender lips in order to exaggerate the look. Measurements were made, and I settled on a rear axle width dimension. Man, what a difference.! The truck was finally starting to look like a hot rod. 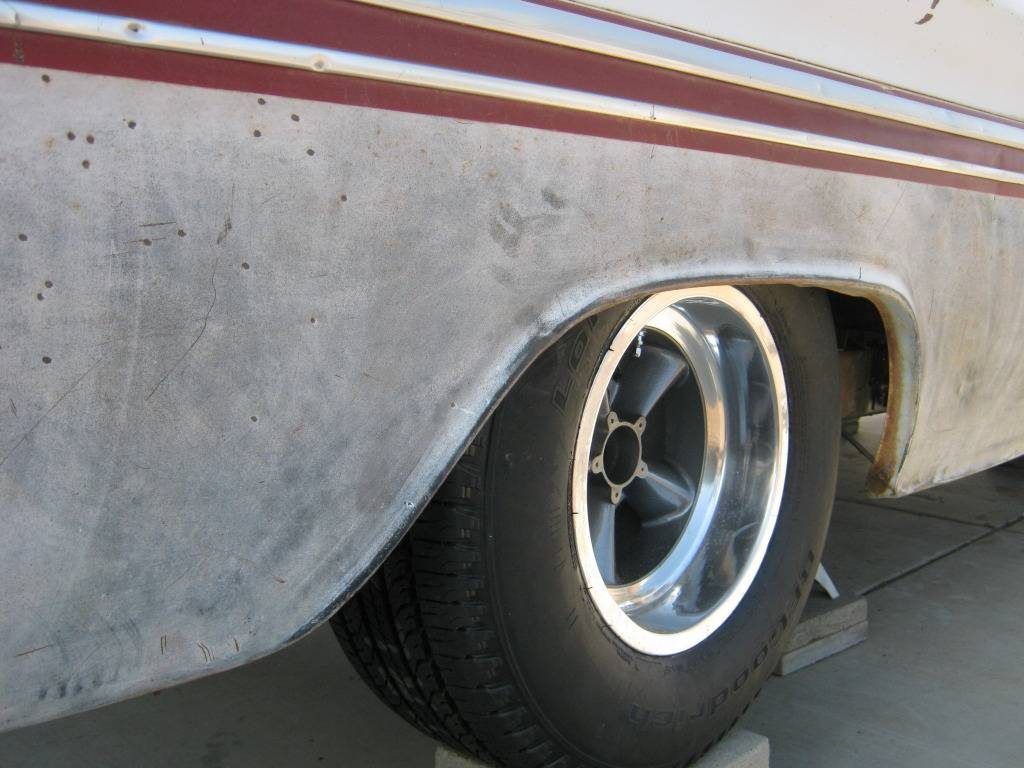 Stay tuned for the next episode, when the rear axle gets narrowed and the truck finally gets lowered down on it’s new wheels and tires.

The Victoria Roadster - Part 1: Build a Car By Accident