Welcome to Part Five of the Project White Trash series; an on-going story highlighting the resurrection of a 1964 Chevy truck that was rescued from the scrapper.

In the last episode, I showed how I removed the old 8-lug front suspension and replaced it with a complete front suspension from a 1979 half-ton Suburban. Although the parts are heavy and awkward, the suspension replacement is relatively straightforward. The benefits you get for the amount of money you spent for the donor parts is well worth it. This same thrifty mindset can also be applied to the rear suspension, as well. You will need to spend a little money on some aftermarket parts, but when the job is complete, you’ll have a suspension that works and rides much better than stock.

WHAT TO DO ABOUT THE REAR AXLE?

My truck was a 3/4 ton, so that meant it was equipped with the heavy duty rear axle. The Eaton HO52 rear axle is virtually bulletproof, but for my use, it wasn’t going to work. As I mentioned before, it was 8-lug, and it was also geared way too low. The rear gear ratio was a 4.10, and through the years, the aftermarket vendors quit making parts for the HO52. There was no way to get a more streetable gear, like a 3.42 or a 3.73 because no one had ever made them from the factory or in the aftermarket world. I wasn’t worried, as I had a plan. I was going to use the factory 12-bolt axle that was in the donor half-ton ’79 Suburban that I cannibalized the front suspension from.

ARE ALL 12-BOLT REAR ENDS THE SAME? 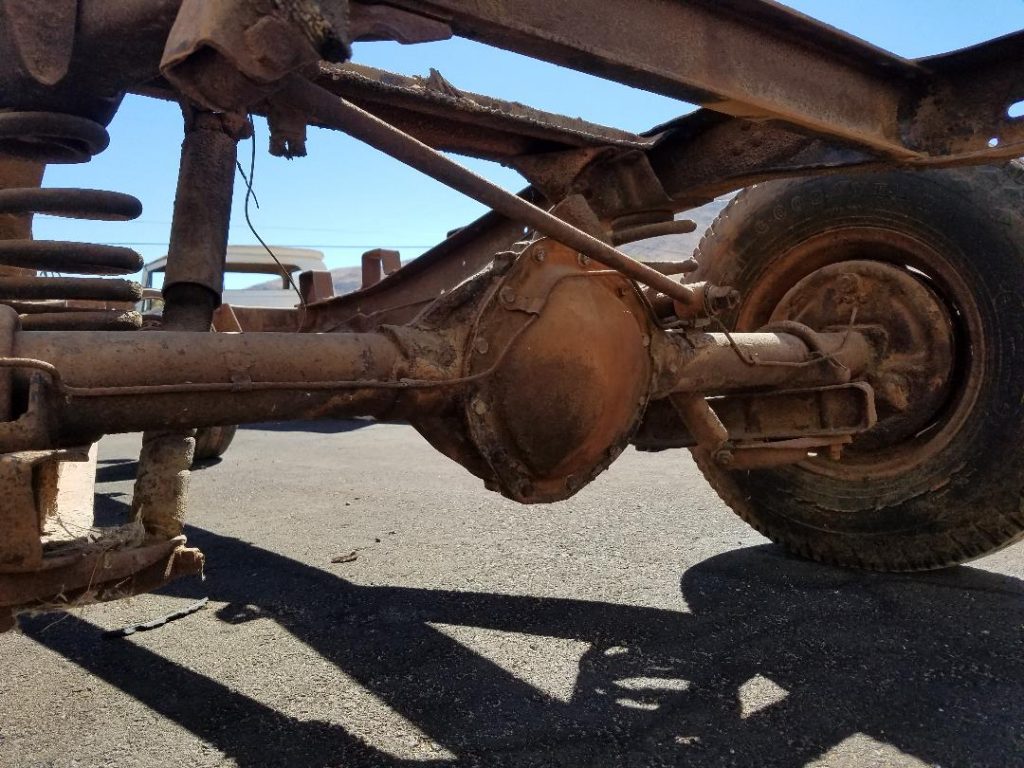 MAKING USE OF WHAT YOU’VE GOT

If you recall from Part 4, I had a 1979 Suburban 1/2 ton to use as a parts truck. The front suspension swap worked perfectly, but what about the rear suspension? In order to use the Suburban’s 12-bolt axle, a few things have to be addressed. The 1973 and up GM trucks are equipped with leaf springs, so the leaf spring mounts have to be removed.

The 1960 through 1972 Chevy trucks have trailing arms, so you’ll have to weld on a pair of trailing arm mounts.  The trailing arm mounts are unique, as they are set at an angle and a single u-bolt runs through the middle. A quick call to Early Classic Enterprises sourced the trailing arm mounts. Jerome Borris of Street Machinery in Cleveland, Ohio hooked me up with new u-bolts. Here’s a picture of the mounts and bolts installed while I was setting the pinion angle. Once I got it set where I wanted it, the rear axle came out and the mounts got fully welded. 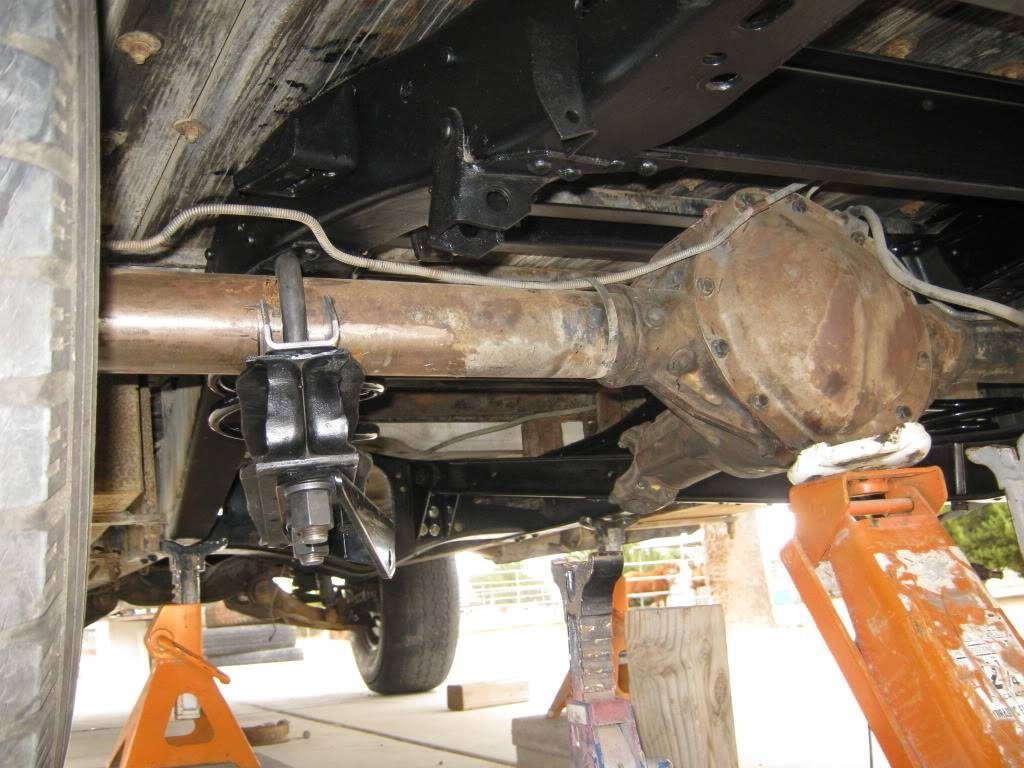 When you lower a front or rear suspension, it will continue the compression arc that the factory designed into it. The lower you go in the rear, the more it moves the rear wheel aft in the wheel opening. I have found that a 5″ dropped spring will move the wheel back about 9/16″ in the wheel opening. A very simple trick to re-center the rear wheels is to flip the forward trailing arm mounts. This simple trick will raise the mounting point of the trailing arm and scoot the wheel back into the center of the wheel opening. It also puts the trailing arms back to an “uphill” position, as the factory intended. Take a look at the picture above showing the rear axle and you’ll see that the forward mounts were flipped.

The plan from the very beginning was that the truck was going to be low. I wanted simplicity and dependability, so that ruled out air ride. After some research, I concluded that a 5″ spring would give me a decent drop and still have a reasonable spring rate for ride comfort. Here’s where it gets tricky. With a rear drop of more than 5”, the stock track bar actually runs at an uphill angle to attach to the rear axle. This causes the rear end to shift to the driver’s side as the rear suspension travels downward, creating an ill-handling driving situation. The Early Classic Super Track Bar kit (912-6572TBK) eliminates this problem by moving the mount from the rear axle housing over to the right side trailing arm, which lowers the bar’s mounting point and corrects the angle. 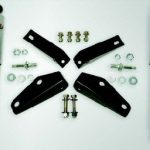 There is one key element that most guys get wrong when they lower their cars and trucks. It’s as if they get so focused on the springs that they completely forget about the shocks. In most every case, a stock-length shock will not work properly in a lowered vehicle. A proper shock selection and mounting angle is the difference between a good ride and one that requires a kidney truss.

On the 1960 to 1972 trucks, when you lower the rear axle, the shock angle increases and renders the shocks nearly useless the lower you go. You have to move the upper shock mounts rearward to decrease the shock angle. This means that you have the awful task of removing the  rivets from the factory mounts to get them out. Some budget-minded builders use the factory mounts and flip them from side to side and turn them 180 degrees to move the mounting position. I decided to use the Early Classic mounts ( 12-80001) because they come with lower mounts as well.

BACK ON ITS WHEELS…….FOR NOW

Once everything got bolted into place, it was time to take the truck off the stands and lower the jack. I used the donor wheels and tires from the Suburban, which are not the final size I had in mind. Everything cleared, but just barely. I was already doing my measurements for a different wheel width and offset. The Suburban’s rear axle is 1.5″ wider than the stock 1964 axle, and I want a wider rear wheel. In a future episode, you’ll see how that issue gets resolved. Until then, the suspension is off to a good start. If you want to put it into a “bang for the buck” category, then it’s off to a GREAT start! 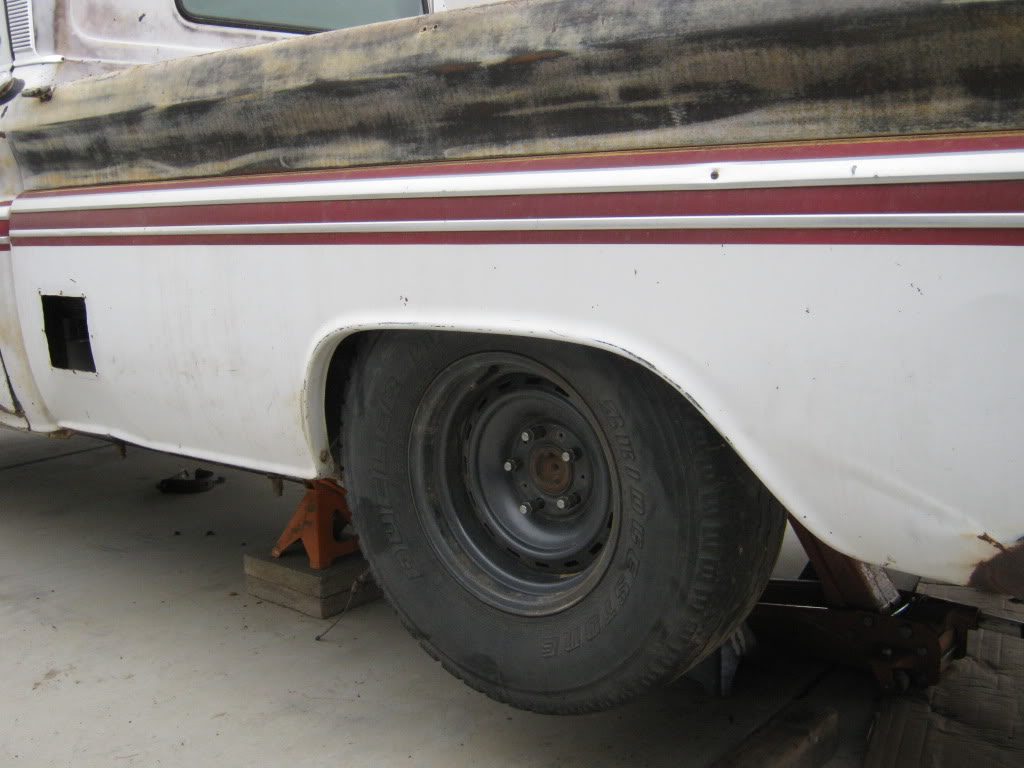 Guys on Film: Rappin' with McGaffin 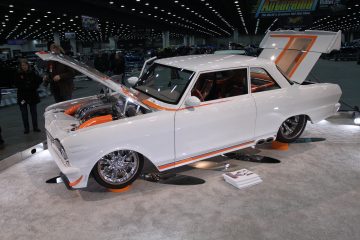