THE FLATTY STARTS COMING TOGETHER

Part 2 of Dad’s 1950 Ford Shoebox story picks right up from where we gathered up all the parts my that my Dad had left behind and finally got the car back to my house. Stories of his racing days flooded my mind and made me smile. Hell, they still do. He had gathered parts for this build for many years, but a lot more pieces of that dream still needed to be sourced. 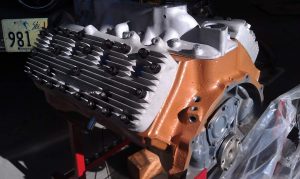 The crank and pistons were already in the block, as were the Schneider cam and Johnson lifters. He had previously purchased the heads, intake, aluminum flywheel, and other goodies, but I had to locate all of the other parts. The engine still needed a Melling oil pump, an Offy fuel pump and filter, new clutch, new engine mounts, new chrome Red’s Headers, an oil filter bypass system hidden in the original filter body… the list goes on and on.

My pal “Uncle Max” Musgrove supply a pair of Stromberg 97’s that he had built specifically for my cam profile and engine compression. Another buddy, Skip Haney, rebuilt the original water pumps. I found an overdrive in Southern California, and although supposedly it was a low mileage transmission in proper working order,  I still had it rebuilt. 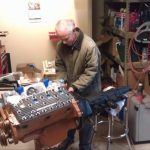 My pal Dave Watson would stop by here and there to give me a hand. Dave is a guru of all things flathead and hotrod. He selflessly gave more help than I could repay in a million years, as if he would have ever let me. He helped with countless details while taking the time to teach me more and more about Henry’s eight cylinder water heater. Dave also helped me get the engine back in the car.

Sadly, he passed away shortly before I fired the car up for the first time. Everybody loved Dave, and we all remember him often.

I collected multiple 16″ x 5″ Ford wheels and picked out the best four. Believe it or not, finding a set of usable 16″ x 5″ wheels is harder than you might think. The wheels were sandblasted to perfection by my friend Todd Johnson. Then, I had my life-long painter buddy Rob Brush prime and paint them in the exact shade that Dad would have wanted. After they were fully cured, I had them mounted on a set of 6.00 x 16 Firestone whitewalls. All the hours that went into getting the wheels done was 100% worth it. The looked awesome mounted on the car.

HOUSTON, WE HAVE IGNITION. WELL, MAYBE NOT……

I did get the car running and driving and putted it around the neighborhood. Man, those headers and full length straight pipes sounded AMAZING! The engine was finicky, and I worked many hours to try to get it more reliable. Unfortunately I never did, and I’m pretty sure it’s ignition related. I’ve replaced the original distributor with another original and even tried a Pertronix electronic conversion. Now it doesn’t run at all, and I think I may have fried the Pertronix. 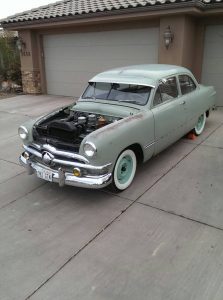 THE PATIENT IS WAITING, PATIENTLY

Sadly, the car has sat for several years now and you can probably imagine my heartache.

Sitting is all it’s done since the mid 60’s anyway, but fortunately it’s always inside. I push it out from time to time to look at it while I’m moving big stuff in and out of the garage. Each time it sits out in the driveway, my excitement level rises. I sit behind the wheel and think about Dad. His spirit lives in this car, and I can’t wait to get it on the road.

I have so many more parts for this car that are stacked and ready for installation including dropped uprights, Aerostar coils, lowering blocks and leafs, original skirts and so much more. My friend Mark Skipper supplied the ’51 Victoria lower trim my dad always wanted too. I want to get it running/driving and have the bugs worked out before I take these next steps. No reason to slam it down and make it pretty if it doesn’t run, right?

Now the big question – do I keep screwing with the flathead I already have tons of time and money invested in, or do I go another route?

Here’s the kicker: I have a fresh small block Chevy wrapped in plastic under the work bench. Blueprinted and balanced with all the best stuff inside, a solid 375 horsepower engine. I also have a 200r4 (my dad’s favorite transmission) available. I have a Maverick rear end for it. My good friend Don Schneidt said years ago, “Your dad would be so sick of f***ing around with that flatty he would have put a Chevy in it by now!” You know, he’s probably right.

Do I chase the ignition issue with the flatty or do I join the dark side and drop the belly button in it? I want to DRIVE this thing for hours on end at 80 MPH. If the flatty is sorted I can do that with the overdrive trans an 3.78 gears.

What do you think?