Welcome to the first installment of Project White Trash. This series will follow the build-up of an old, derelict 1964 Chevrolet truck that was merely minutes away from being sent to the crusher. The intent of this series is to show how you can build a cheap, reliable hot rod using clever methods and easy to find parts. In the stories to come, you’ll see a lot of wrecking yard action, parts swapping, Craigslist scores, and swap meet finds. The C-10 craze is white-hot right now, but you can easily do many of these tips and tricks to any brand of truck. There are still great deals out there if you’re willing to spend the time and be ready to pounce when one shows up. The key point to remember is this: You don’t need to break the bank to have something really cool.

DECIDING ON THE NEXT PROJECT

A while back, I got the itch to build a beater pickup. I just wanted to build something that was dependable, sat right, and was just rough enough to where I didn’t have to worry about it when I parked it. It’s not like I needed another one, as I already had a half-finished ’55. I have owned quite a few ’73-87 C-10s, but I’ve always had a soft spot for the 1960 to 1966 versions. For years, they were kind of looked upon like a step kid in the truck world, and I never understood why. They have stylish lines, and there’s still a bunch of them on the road. With this in mind, I started my hunt for a 1964 to 1966 Chevrolet truck. I preferred the slanted windshield posts of the 1964 to 1966 versus the 1960 to 1963 wraparound windshield versions.

THE HUNT IS ON 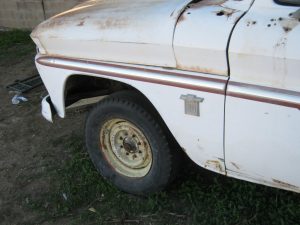 Right away, I started licking my chops because the misspelling of the word “Chevy” can automatically mean that nobody is looking at the ad if they’re using that word (Chevy) in their search terms. The picture in the ad showed a 1964 to 1966 Chevy truck parked in a driveway, so the seller was partially right about the year.

His confusion stemmed from the fact that in 1964 and 1966, Chevrolet placed the model designation emblem on the lower portion of the front fender. In 1965, they put it up high, on the cowl extension panel. Closer inspection revealed that it was a 1964, judging from the emblem design.

It was time to grab the phone and make contact with the seller before somebody else stumbles on it.

The first call to the seller went right to his voicemail, so I left a message about wanting to ask some questions about the truck. After waiting a full day for a reply, I tried again. This time, I actually got a real person on the line. It wasn’t the seller, it was his younger brother, who was more than happy to answer any questions I had. Within minutes, I learned that the truck had no engine, an SM-420 4-speed truck transmission, 8-lug wheels, lots of dents, and hardly any interior. I was about to tell him that I was going to pass, because I wasn’t looking for a long bed, ¾-ton truck. He then told me that the cab floors were perfect. And then he said, “It’s got factory air conditioning”. I suddenly went from uninterested to interested.

There’s a fish on the line, and that fish is me. 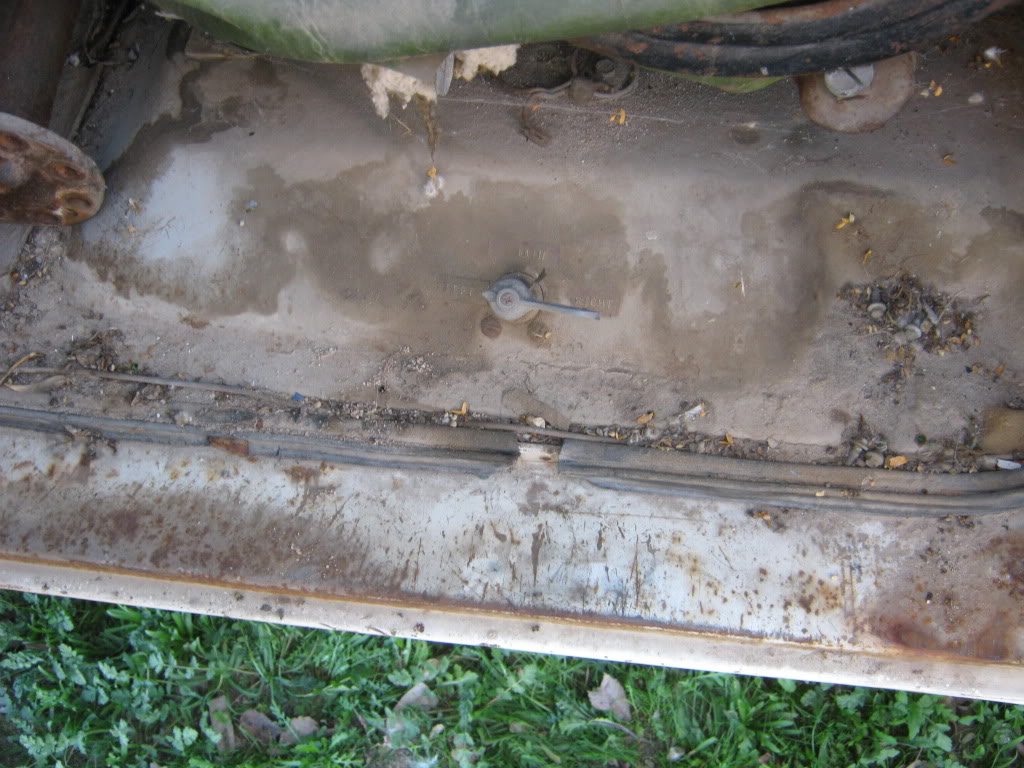 The decision was made to go look at the truck. I decided that I had nothing to lose because the truck was about 20 minutes away from me in Hesperia, California. We decided on an afternoon time the following day. I needed to hit the books and learn everything I could about the 1964 model before I showed up. My research told me that the truck was originally equipped with a 283 engine, SM420 transmission, and an Eaton HO52 rear axle. I also discovered that the seller might be right about the air conditioning. In 1964, in-dash air conditioning was available for the first time, but it was sold as a kit and it was dealer installed. In 1965 and on, air conditioning could be ordered and installed on the assembly line. 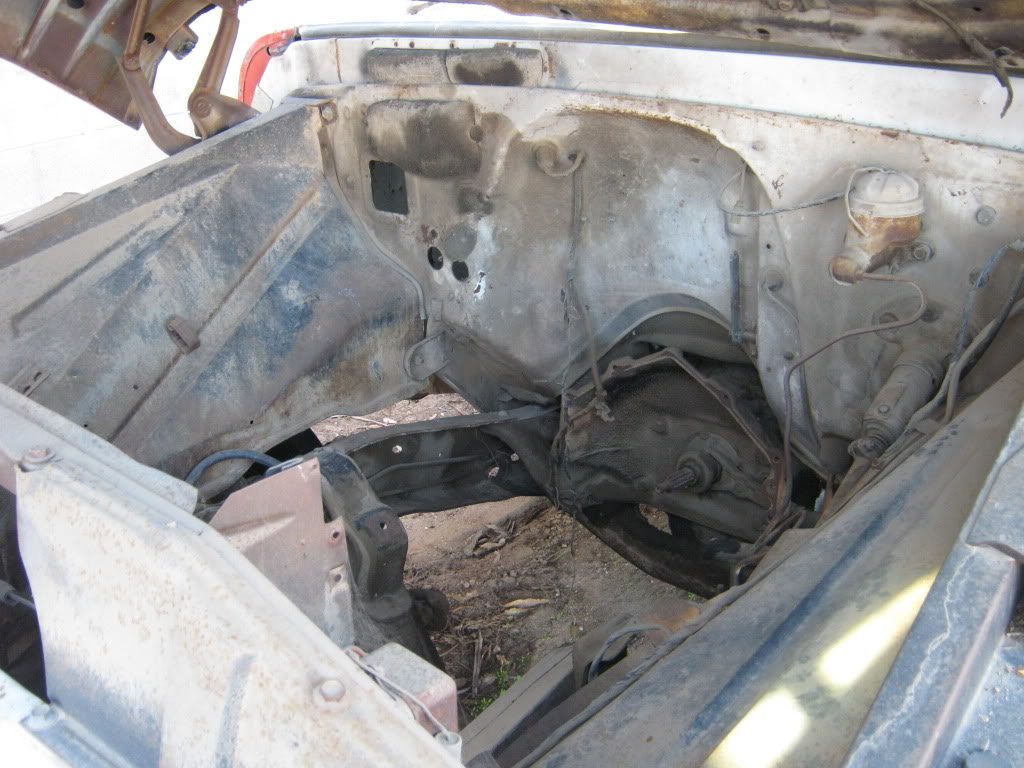 IT’S AS ROUGH AS A NIGHT IN SAN QUENTIN

We met at a local shopping center, and I followed him to his house. As we pulled up, I could see that this wasn’t the house that was in the Craigslist ad. The truck was now tucked away in the far corner of the backyard. As I walked up to it, my heart sank. It’s condition was way worse than it looked in the Craigslist picture. The grille was trashed, there was no back window, and every panel was full of dents. All the tires were shot, and the hood sat crooked because the hinges were broken. The bed was full of junk. The interior had pounds of dirt and mouse poop in it. 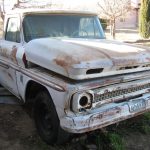 I nearly walked away right then, but I wanted to at least be respectful to the seller.

He followed me around the truck as I made my assessment lap. I heard him drop the price to $500, and I kept my eyes forward, saying nothing. I got to the driver’s door and opened it. Right in front of me, I saw the factory A/C duct bezel in the center of the dash. The seller wasn’t kidding, this WAS a factory A/C truck! Tucked up under the dash was an ugly black ashtray that got my attention. The dash ducts on the factory A/C equipped trucks took up the same area that the stock ashtray used to be, so they mounted it under the dash. Those ashtrays alone can fetch as much as $350 or more on eBay. The decision right then and there.

I was going to buy this truck. 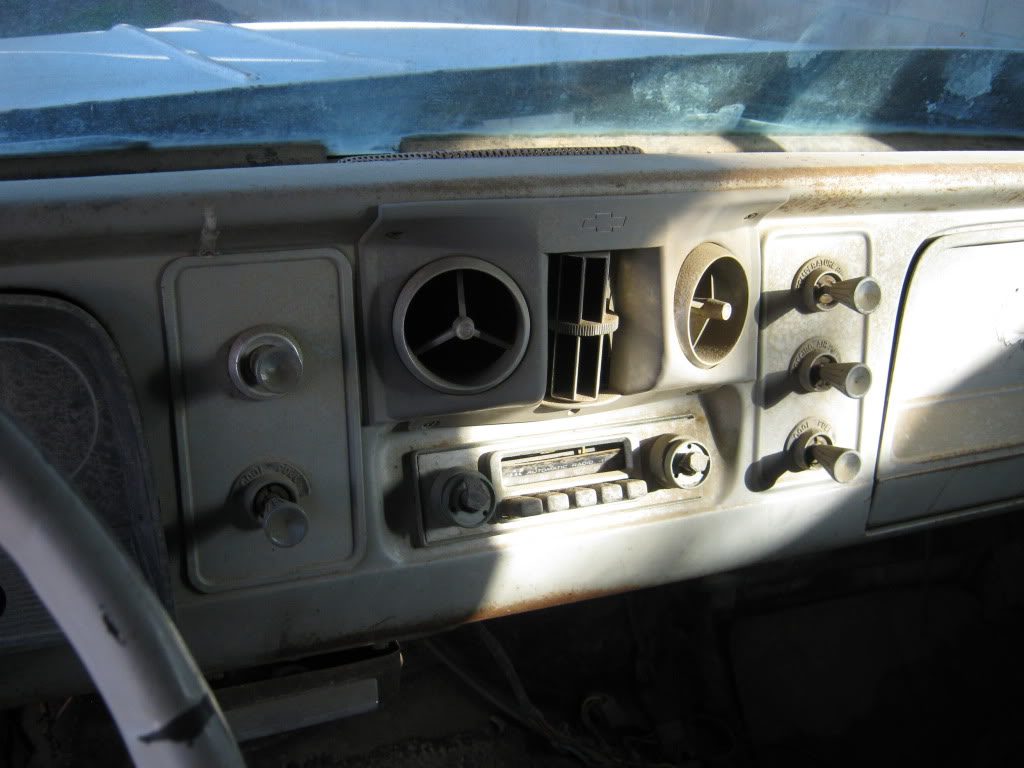 I crawled under the truck. The entire undercarriage was covered in Black Widow spiders, and hundreds of egg sacks hung from nearly every surface. Both of the trucks rear cab mounts were broken from years of hard abuse. The remnants of the exhaust were hung by chains welded to the cab floor. I came back out from underneath and he was still talking, and I heard $400. He’s heading in the right direction, but It’s still more than I want to pay. It was so trashed that it wouldn’t even make a good parts truck. 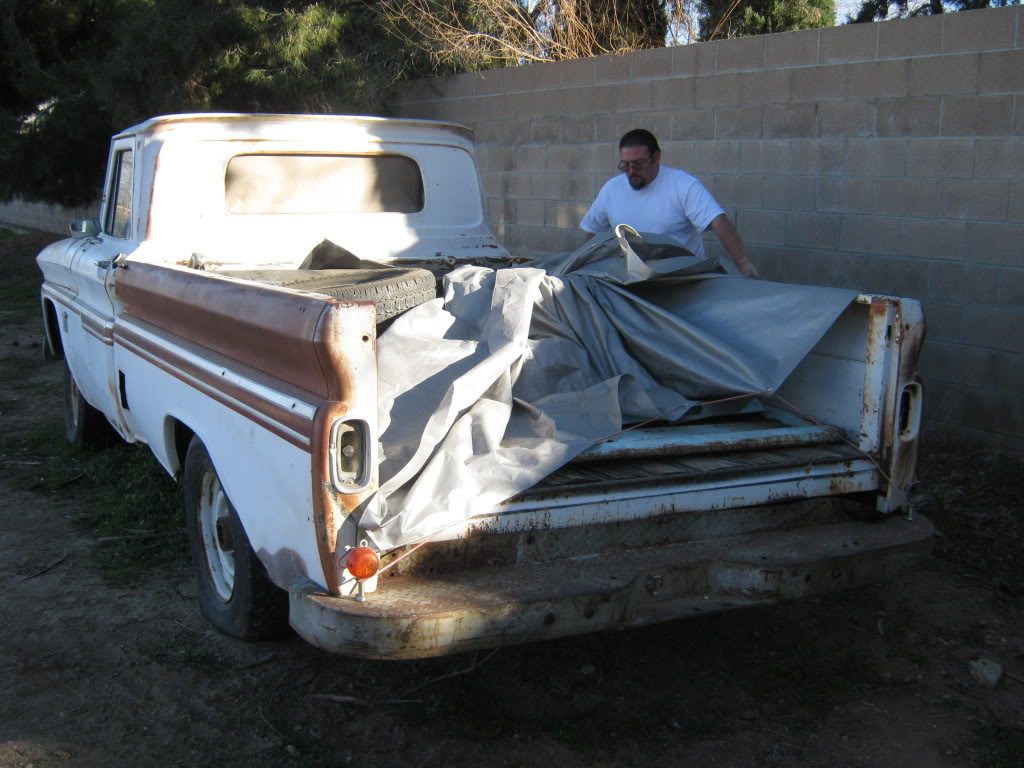 Out of the corner of my eye, I kept noticing a lot of activity. People coming in and out of the house with large boxes and loading them into cars and trucks. That meant that the truck needed to go TODAY. It was time for me to make my offer.  I told him that the truck was going to need a lot of work and my best offer was $200 cash. We shook on the deal. The seller looked at me and said that he was glad that I had bought it. He told me that if I would have passed, he was going to call Pick-A-Part and have them haul it away. No problem, I just bought an ashtray and the seller threw the truck in for free!

Stay tuned to here on the website for Project White Trash, Part 2, when this disgustingly filthy beast gets towed home and steam cleaned. The “To-Do List” gets HUGE and I begin to question my reasons for buying it.

And then there’s the bees. LOTS of bees.

You may find part two HERE, and part three HERE.

Throwing Back a few Torts with Chris Jacobs