With Speed Week going on in Bonneville right now, I figured I’d tell a little more about myself. Ever since I was a kid, I loved land speed racing. Guys like Gary Gabelich, Mickey Thompson, Craig Breedlove and Art Arfons seemed otherworldly in their quest to go faster than anyone. As I grew older, I decided there were some goals I needed to chase in this amazing form of “free-for-all” motorsports. And this version definitely had my name written all over it. I’d pondered different classes I thought would be fun to go play in. I could really try some very different things if I decided to “dance” in the UNLIMITED class! That’s right, I decided to build a streamliner and go play with some crazy guys and girls and chase some crazy records. 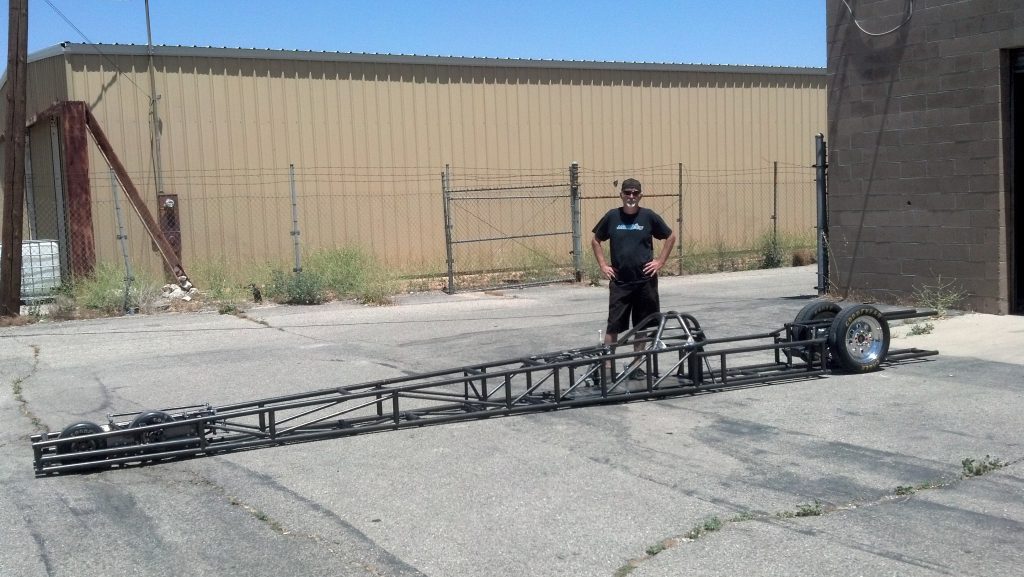 “HAVE YOU EVER BUILT A STREAMLINER BEFORE?” 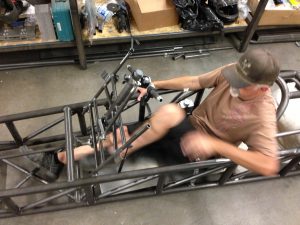 After finishing up a movie truck in 2012, I decided it was time for a new “me” project and I dove in feet first. I knew I was going after records that were set by my friends Rick Yacoucci and Jack Costella. Both have dominated in whatever class they played in. People we’re a little shocked that I was aiming for the top guys. But anyone who knows me also knows I never settle for second place!

I’ve been around racing forever and knew what I wanted to do and the only way it would happen is if I built the streamliner myself.

People asked me “Have you built a race car before?” And the answer was always the same. “Nope, but it can’t be that impossible.” I knew the frontal area of Rick’s streamliner (hey, you gotta do your homework) because I knew mine couldn’t be any bigger than his (five square feet max.) if I’m going after him.

DRAWING ON PAST EXPERIENCE

I was familiar with Adobe Illustrator and CorelDraw from doing shirt artwork so I figured I could make a set of “to scale” blue prints and build the streamliner from that. I took my idea and drew it to actual size so I had something to actually follow. After numerous changes (and many a middle of the night wake up and go fix something because it bugged me) and I had some useable prints. I cruised over to Kinko’s Print Shop and handed the guy a CD. After questioning me on this crazy monster he was looking at, he printed out two sheets of paper which had both the bottom and side profile of the basic car. 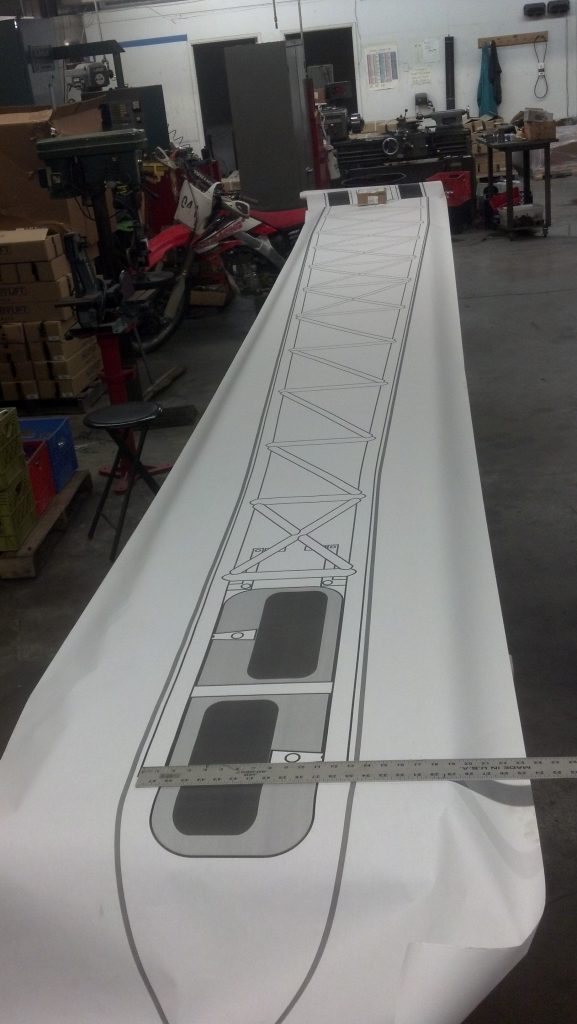 The look on people’s face walking into a printer and seeing two 30’x36″ (yes, thirty feet by thirty-six inches!) drawings laying across the floor was priceless! Now I just had to put a list together of materials. And figure out where I’m going to build a 30 foot race car. 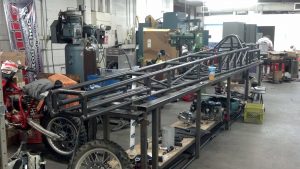 My friend Roger Hurd (multi-time Baja WINNER) was at my house and I rolled the paper out to show him my idea. After flipping out at the ridiculousness of the whole thing, he and his step-dad Mike Harper offered me a corner of the shop to build the BEAST.

This is where things got fun.

My friend Bob Larson granted use of a 20’x24″ table/jig which has been used for numerous land speed projects over the years. I grabbed a huge pile of .095 wall chrome moly and started cutting parts. Ron Williams at Victory Race Cars helped me bend the upper and lower frame rails to match the drawings and it was game on. I cut, notched, bent up the cage and then tacked everything together. Being that my welding skills aren’t what I’d call race car quality, I had my friend Mike Lloyd do his magic with the TIG and make the finished product look amazing. 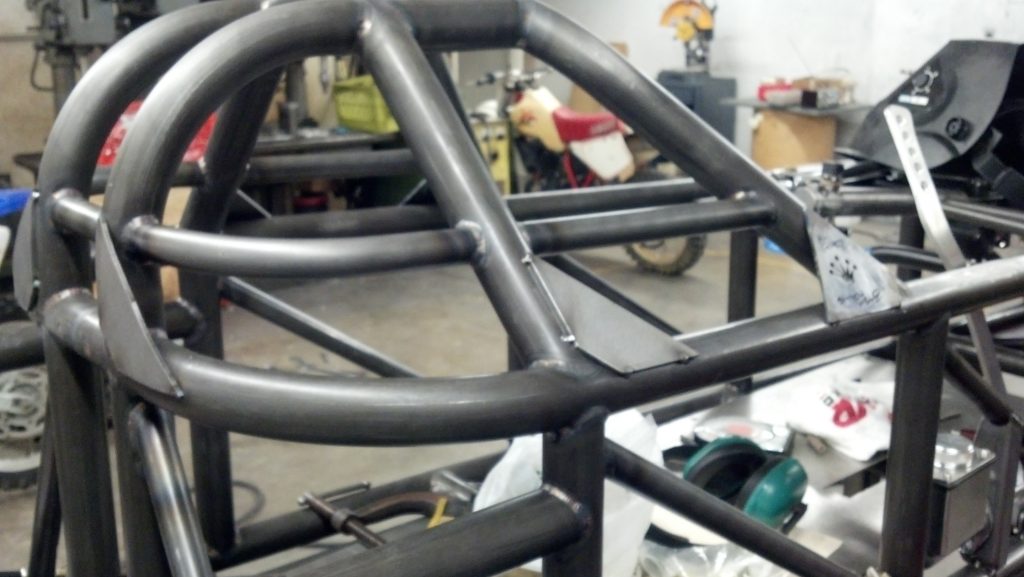 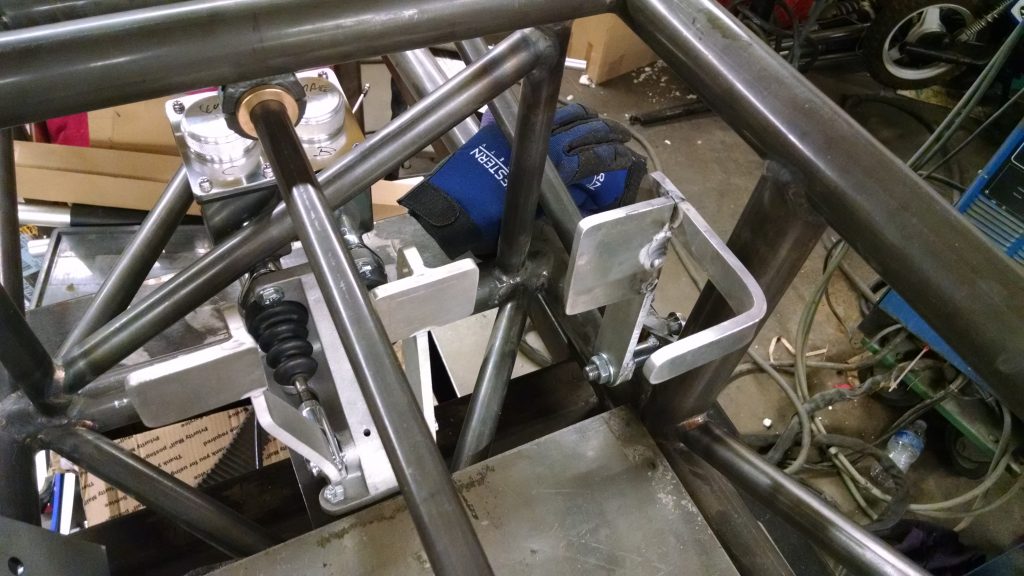 Alex introduced me to his good friend Art Thompson of Sage Cheshire Aerospace. When I unrolled the drawings in his office, his mouth dropped and he was in. Now I had serious help in making a computer designed body that would help push this to the absolute edge. I wanted to go after records from a completely different angle in the “small engine” classes. I reached out to the guys who dominate with “small” stuff on the East Coast. Without giving too much away, I found a new friend, Joe Kaczor who hates losing as much as I do. The engine stuff is covered. Brian and Brent Porter at Western Fabrication are making all my laser cut pieces. With help from Arrow Racing with parts, this project will soon be back at it and on the salt! 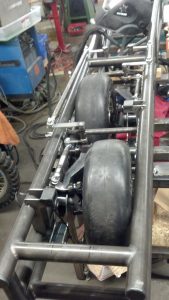 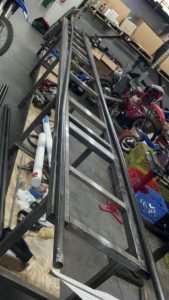 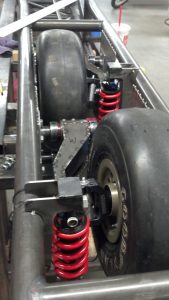 WHAT’S TO COME MUST WAIT

Now that this Round Six deal happened, I had to drop the racing ball. The future of one could have a huge effect the other! Although my racing venture is on hold, I seriously look forward to getting back at it. Stay tuned…

Are you presently chasing a speed dream and building your own racecar? Tell us about it in the comments below!