There’s a great part in the movie, American Graffiti, where the character Toad is trying to buy liquor at a drug store, and when asked for his I.D., he says, “I lost my ID in a flood.” You have to admire Toad for his originality in coming up with unique excuse. Fortunately for us, major floods don’t occur very often, but when they do, they can be devastating. What if I told you that there was a flood where a few thousand people nearly lost their hot rods? That flood that I’m referring to was the freakish one that hit the 1992 Street Rod Nationals in Louisville, Kentucky. 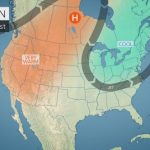 I was born and raised in Louisville. Growing up, I never realized how crazy the weather was because I had nothing to compare it to. Louisville sits at the southern tip of what meteorologists refer to as “The Ohio Valley Jet Stream”.  This jet stream creates a collision course with the warm air from the South and the normal West-to-East jet stream. The weather changes by the hour, and you have to be prepared for whatever is coming your way. That couldn’t have been more true for the thousands of hot rodders who descended on Louisville for the 1992 Street Rod Nationals 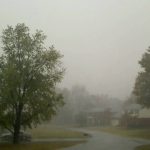 On the Saturday of the 1992 Street Rod Nationals, a major thunderstorm was  developing over Southern Indiana. The storm was heading due south and on a beeline to Louisville, just across the Ohio River. Once it reached land again, it hit with a vengeance, with winds nearing 65 mph, dropping over 5 inches of rain in a two hour period. Widespread flash flooding hit downtown Louisville, with water several feet deep in some areas. Just a few miles south of downtown, the Kentucky State Fairgrounds quickly became a fishbowl. Within a short period, they were under two feet of water in spots, some lower spots had over three feet of water. The rain kept falling. The nearby Interstate 65 was closed due to flooding, and that was a rarity. Interstate 65 is the major North-South artery that connects Tennessee, Kentucky, and Indiana, and it NEVER shuts down.

Like any show, when the rains come, people go inside or take cover. This is not a rare occurrence to folks in the Midwest, as most are used to it. After a short period of being inside, stories started to circulate among the show-goers about the situation outside. It was getting serious. Once the news about the closure of Interstate 65 was discovered, the smart decision was to stay inside and wait it out. I can’t imagine the feeling of the thousands of hot rodders who are wondering about the their cars being out in the storm, all the while hearing the deafening thunder that seemed to hit right on top of the building. It was raining so hard that they could hear it hitting the Exposition Center roof, some 50 feet over their heads.

WHEN THE RAINS OVERPOWER THE DRAINS…. 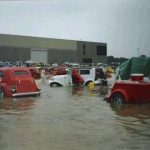 The rain overpowered the roof’s gutter system and it started shooting up in three-foot geysers into the inside of the building. They had storm drains in the middle of the building due to it’s huge size. There was so much water coming down, that the system could not drain fast enough. The loading docks in the rear of the building became flooded. Water was pouring down the ramps into the lower levels of the vendor area. People went to the front doors and windows to see the storm and they reported that it was “like somebody had tipped a swimming pool upside down”. The lightning was coming down all over the parking lot and the flash illuminated the darkness. That’s when people started to notice that the parking lot was starting to “fill up”. Ignoring the warnings, many ran out to go save their cars.

People joined together, participants and spectators alike, pushing cars to higher ground. It quickly became apparent that the newly installed wood chips from the landscape had clogged many of the drains in the parking lot, and the water was rising quickly. Chip Foose and Troy Trepanier were in the Boyd’s outside display area, lifting up the AlumaCoupe onto a stack of display wheels in order to raise car out of the rising water. Troy’s 1950 Buick “Bumongous” was also there, and it was too heavy to lift, so they pushed it to higher ground. The rain was starting to slow down, and more people came out of the building to rescue their cars. 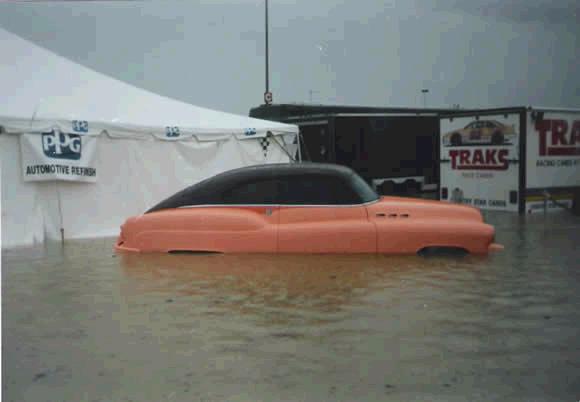 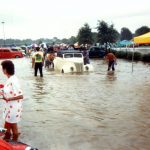 The “lucky” people were table to get to their cars and idle away. Their cars sounded like motorboats, with their submerged exhaust tips. Some were no so lucky. Just the simple action of opening their doors filled their interiors with water. Convertible tops were leaking. Topless roadsters were a lost cause, as even if they were “tarped”, so much rain fell that it filled the cover like a water balloon. Coolers were floating everywhere, display tires from vendors floated by like lost inner tubes, trailers became boats, and lawn chairs looked like driftwood being carried by the rushing current. Canopies were flung around like kites, some landing against cars with high-end paint jobs.  Rumors quickly spread that someone had been hit by lightning and that a few people had even suffered heart attacks pushing their cars out of the water.

A few engines met a bitter fate when their owners tried to start them and the trapped water inside the cylinder created a hydraulic condition, bending connecting rods. There was a story that a guy with a fiberglass ’32 roadster was drilling holes in the bottom of the body to release the trapped water. An oil slick was forming on top of the flooded areas from all of the leaking engines. One guy said, “I’ve never seen so much wet tweed in all of my life”. 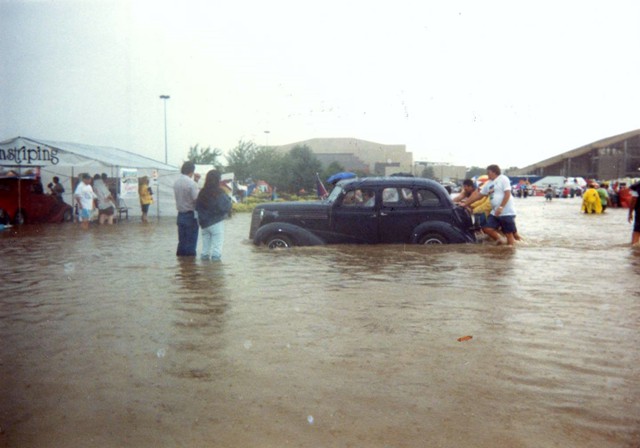 TENDING TO THE WOUNDED

The next day, the parking lot became a repair facility for the wounded and waterlogged cars. Local auto shops descended on the fairgrounds to help people get their cars roadworthy. Guys were pulling their spark plugs and cranking the engines and water was shooting out everywhere. Engine oil and filters came in by the case, as all of the water-logged engines required new oil. As the day went on, the “casualties” started to slowly leave the parking lot. It was like wounded combatants leaving the battlefield to go back home to recuperate.

MAKING THE BEST OF A BAD SITUATION

For the people who were at the 1992 Street Rod Nationals, it left a memory that they will never forget. In typical hot rodder fashion, it became a standing joke. At the next year’s event, some were wearing T-shirts commemorating the flood. Others made “water-line” marks on the sides of their cars to brag about how high the water had got. If you hand a hot rodder a lemon, they’ll make a lemon pie. Through it all, it made one point very clear. The hot rod community has the best people around. In a time of crisis, total strangers helped total strangers. Friendships were forged, and memories were made. Car people are the best folks around.

A note to Mother Nature concerning future storms… We know you can get really angry from time to time, but can you hit the Super Bowl instead?

The images attached to this story were all sourced from the following websites: