IT’S ALL ABOUT POTENTIAL

My first reaction when seeing a Cube some years back (don’t forget, these have been around overseas since ’98) was “not too sure about that.”

Don’t get me wrong. I was impressed as all get-out that anyone could pack that much room into such a small-looking package. But the look was odd to me.

Fast-forward ten years, and my how things had changed. My first moment sitting in a Cube was a wild time… Headroom galore, great sight lines, and just enough legroom for even my lanky appendages. The dash was minimalist, but laid out in a tremendously intuitive way, and all controls were easily understandable and useful. Kinda cool indeed. Add to this that some nine years after I drew the concepts below, you can find these things for a song. And most have escaped the bolt-on (and 3M double-face taped-on) over-accessorization fate of so many HHR’s and PT Cruisers. That saves a lot of heat gun time.

The ride was relatively comfortable, reasonably stable, somewhat responsive and above all, quiet for what it was. It just felt comfortable in its own weir skin. It was that last fact that kept me stunned. The Cube just felt right somehow. At least for what it was, anyway. A brilliant vehicle? Oh, no. Purposeful in a niche sort of way? Sure. Why the heck not.

A WAVE OF INSPIRATION

Design-wise, I have to say it had me hooked. If you know me, then you know my love for asymmetrical design, and that rear window treatment NAILED it. A wrap-around side glass on the passenger side (alleviating that potentially aggravating blind spot, as well as adding character) meets a thick pillar on the left. And again, just feels right. Couple this with tall slab-like side panels, rounded corners all over, and a very trick windshield shape (oh, you’ll be seeing this on a few designs of mine to come), and we’re getting someplace. But oh that tail light… It was an instant love-fest for me. I had about thirty cars I wanted to use that in, and it’s not coincidental that I like it so much when it shares a similarity to a certain Thunderbird production run.

It just said “custom car” all over (hell, even the headliner is sculpted already!)… and I dig the Cube for that immensely. It’s light years beyond my first thoughts on the Scion xB, and flat-out made me WANT one, simply from a quirkiness standpoint. Where the xB looked initially like some ice cream truck’s genetically-deprived third cousin on its first trek into the big city, the Cube looked tremendously confident in its weirdly Hollywood-designed, distopian vehicle future skin, and the seating position keeps it all looking like a personal vehicle, and not the aforementioned treat delivery vessel.

Naturally, I began sketching ideas for these Cube’s as soon as I laid eyes on them, and one particular inspiration kept knocking on my brain: 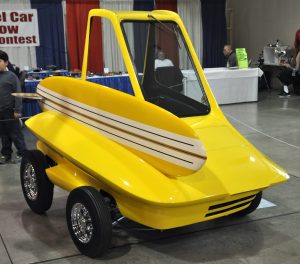 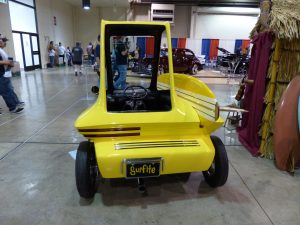 I mean really; this thing had it all going on. Light years before sites like Local Motors toyed with “lifestyle” vehicles, this one nailed the “purpose-built econo-machine” theme on the melon. This thing has always ranked as a top ten custom car in my book, not only because it’s so damned original, but it’s also surf-oriented. And as you know, I love me some surf ANYTHING.

And man… the little Cube not only calls out for a “lifestyle vehicle” treatment, but as a surf wagon??! Oh YES! Taking cues from Mr. Roth’s lilliputian land rover, I plugged in classic hot rod and So-Cal VW styling cues, and attempted to honor the master “hisself” (as he’d say) with a modern take on the little Surfite.

Pop-out side glass? Check. Asymmetrical tail light treatment? Check. Aggressive stance? Checkity-check. Custom trim and mild re-work all over? Double checkity-check. Take a very unusual car and make it even more personal/unique? Check, check, checkity-check check! It’s useful, like the swing-out rear glass and flip-up side windows, to the small step built into the rear fascia, and, well… it just looks COOL. I dig it, and hope you do, too… 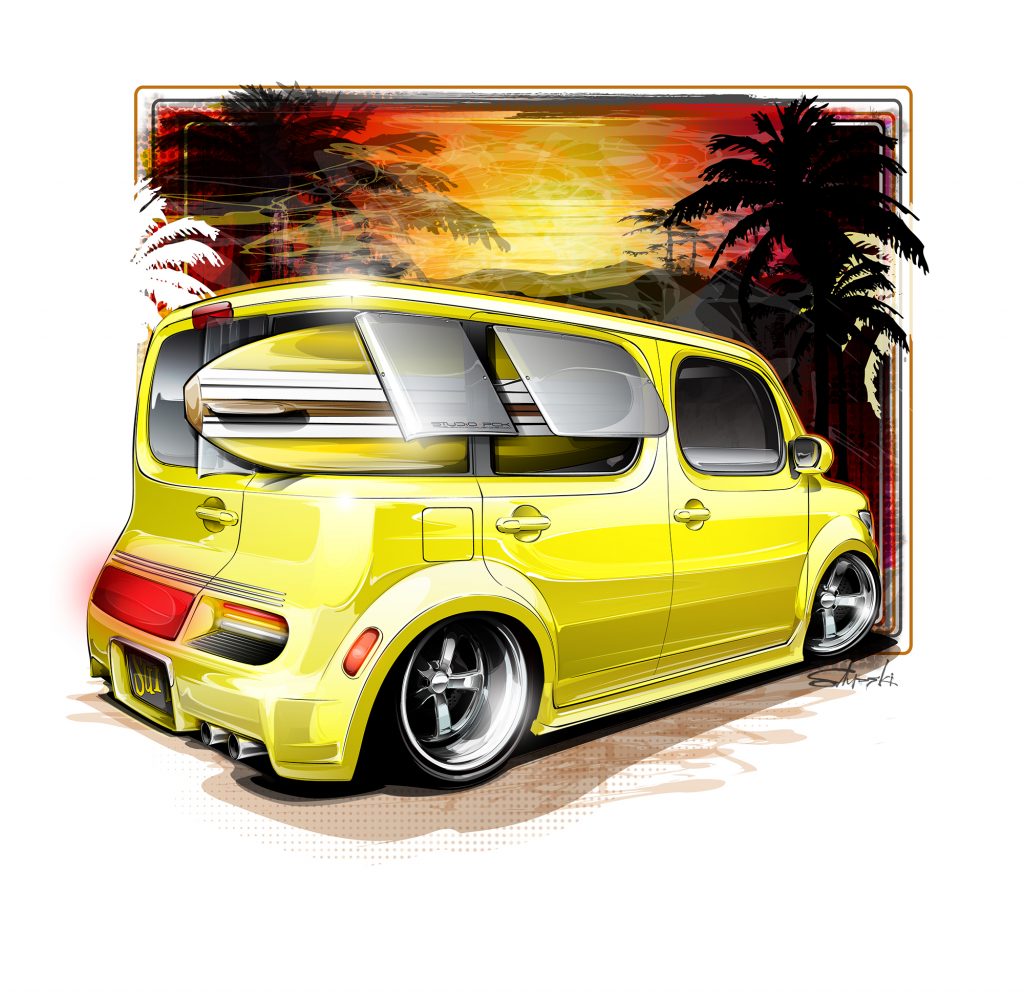 As an Alexander Brothers fan, I’ve always enjoyed a certain “quirky/futuristic” aesthetic when it comes to a kustom, and that taste is finding it’s way into the artwork in a huge way. Think “Deora meets the modern day,” and you’re getting warm. Throw in some healthy Ed Roth influence, and by golly, we’re getting there. Top it with some Winfield and Cushenbury asymmetrical appeal, and man, it just gets wilder by the second! It had been literally years since any new car had trapped my attention like this. 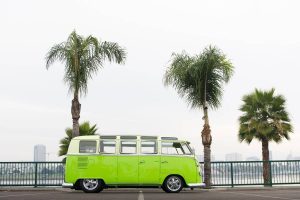 Logically, my brain turned 180-degrees, and toyed with the idea of pushing some So-Cal V-Dub micro van style at one of these, and it all kinda stuck neatly. While this one is cut up as well, it could be mimicked on a much milder scale.

A folding rag top dominates the roof, and just works to emphasize all of the already-spacious cabin, and just “makes” the whole vibe come to life.

While that windscreen may not play too well with the original safety design of the vehicle, having a crank-open unit would be AWESOME at the beach, and reinforce the whole idea for anyone too burnt to recognize the theme: 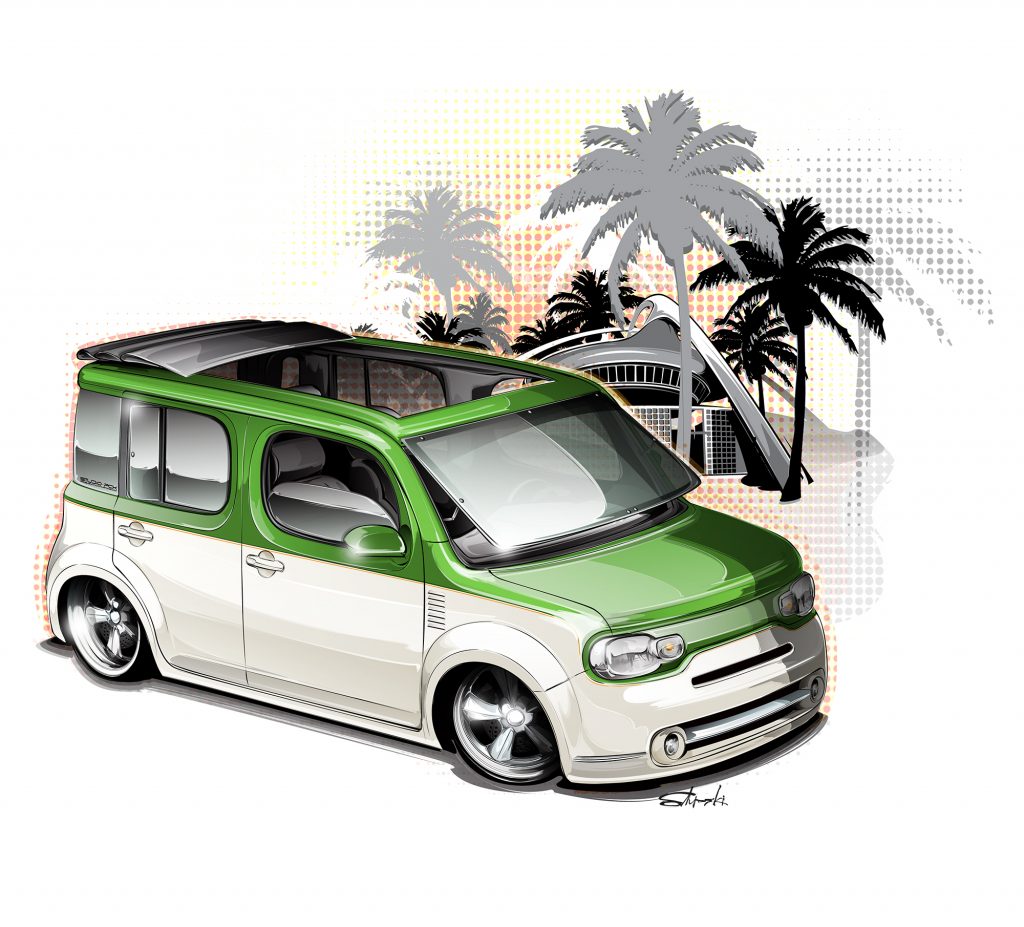 A slammed stance, some Euro touches (as a nod to the 1980’s VW trend in Southern California), and even a few louvers punched into the cowl area for added influence recognition, and you have a clean and nearly-timeless ride, crafted from a forgotten late-model. Not an easy tricjk to land in many cases.

What other late-model cars grab your fancy from a customizing perspective? …and what would you do it to, or where would you grab inspiration from for it?