Right after my parents moved back to So. Cal. from eastern Oregon, dad wanted me to find him a truck. He said an El Camino would be cool too and he really didn’t even care what year. A friend myself went down to the Pomona Swap Meet in March of ’97 and found him a fairly decent (or so it seemed at the time) nothing special, but with AC car for $3200. After driving it for a year like it was, we found some early style Torq Thrusts, had them fully polished. While the wheels were getting done, Dad redid the front suspension with dropped spindles and all new bushings. The car was cool and dad drove the crap out of it.

OVERHAULIN’. WITHOUT ALL OF THE COOL CO-HOSTS. OR HELP. 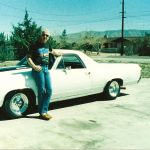 Now in 2004, my parents decided to move back up to Oregon to retire. Dad had bought parts for me to start putting together a fairly nasty big block and install it for him after they left.

After looking over the car for about a week I decided maybe to clean it up a little more and so the story begins… This is the story of how I took a basic, somewhat clean ’72 El Camino that belonged to my Dad and built him a pretty wild hot rod and lied to him about the WHOLE project!

It was a monster undertaking for an after hours, long weekends thing I took on because I thought it would be cool.

BUSTING OUT THE GOOD STUFF 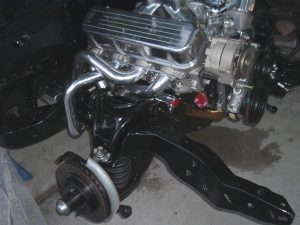 I had really good stuff for the start of the engine (’71 454 block and crank, AFR 335 heads, Isky Roller, Dart intake, BG 1025 carb, etc.) but I figured I’d do a little Krylon tuneup, just to make it look nice under the hood too. Once I started getting ready to yank the old motor out, I decided to take it up a notch, take off the front sheet metal and make the frame look good too.

Hmmm… Well now that it’s this far, maybe I should take the rest of the car apart underneath and at least clean it up too. Ok, since the motor’s pretty nasty I didn’t think it needed the A/C and what Dad didn’t know, won’t hurt me! Now he still has no idea any of this is going on. Thank goodness everyone who did know, kept their mouth shut! After about 10 gallons of diesel in my steam cleaner and another 5 gallons of purple stuff (de-greaser) it was coming along pretty good.

Looking back, I should have just taken the body off the frame, but at the time I just thinking about cleaning it up and making it look nice. I was underneath the thing for hours cleaning off undercoat and taking most of the paint down to bare metal. As I’m doing this I’m wondering what did I get myself into. Having a good friend with a powdercoat shop also came in very handy! Anything I could unbolt (suspension pieces and parts, brackets pretty much everything) was coated in a nice eggshell finish black! I painted the whole chassis in semi-gloss chassis black and re-undercoated the body.

Time to start bolting parts back on. I decided to take a break from the car and focus on the engine. After all the machine work was done, cam degreed, pushrods measured and made, etc., I put it on the test stand to fire it off, get everything adjusted and checked for leaks. Man, you have to love the sound of nasty big block! I tell dad the motor runs, I just need to get the transmission redone before I can drop it in. He has no idea his car is completely torn apart! So back to my story (it’s too freakin’ windy outside to do anything!). The motor goes back in with a brand new Art Carr reverse manual valve body transmission that I had.

THE HOOKERS BRING THE PAIN

The exhaust was a complete pain! I needed to run Hooker Headers 2 1/8″ primaries ‘cuz that’s what the heads called for. I also remade all new brake lines because the old ones looked pretty bad. After getting them all dialed and the exhaust all welded up (went with 3″ and 40 series Flowmasters ‘cuz dad is deaf and he loves loud!!), I had my friend Vinny (Vinman Performance Coatings) do the Cermachrome thing on the whole system. 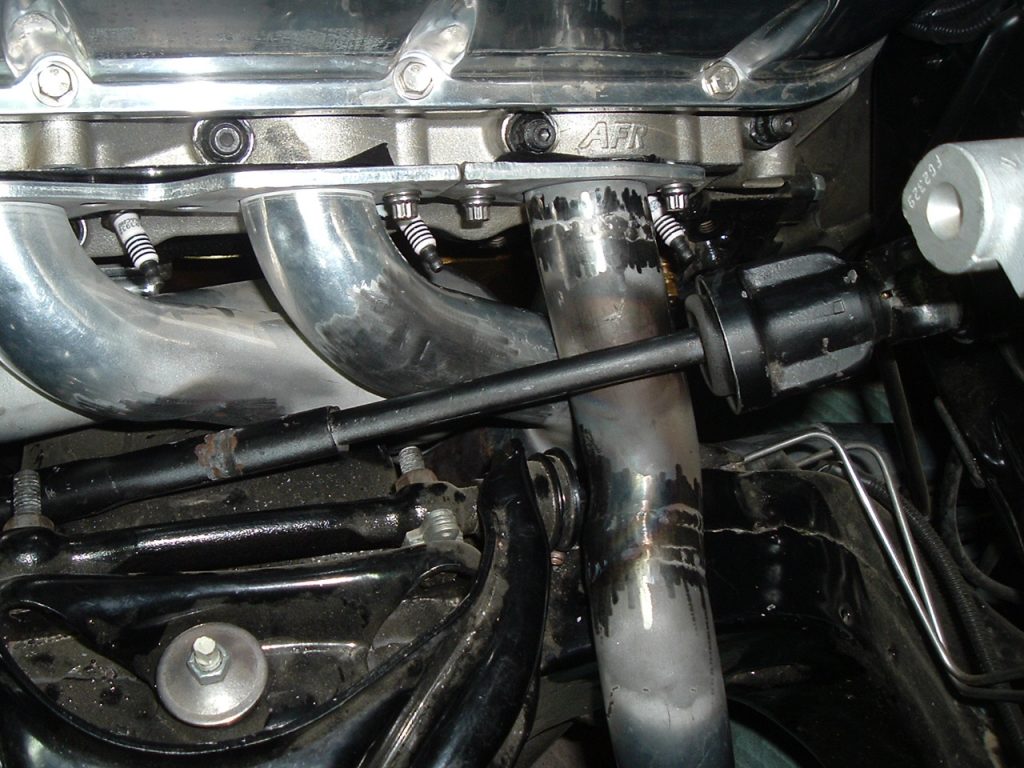 Dad still has no idea his car is in shreds!

He’s now mad at me because he thinks I’ve had the way too long to not have the motor in (I’ve had the car about 9 months) and says he’s bringing a trailer when he comes down for my daughters graduation! It’s funny, because he’s mad and I laugh (I can do that when he’s 1000 miles away and can’t smack me!) and tell him he better bring a fork lift too! I told him to go check his email so that would make sense and I proceed to send him this very pic: 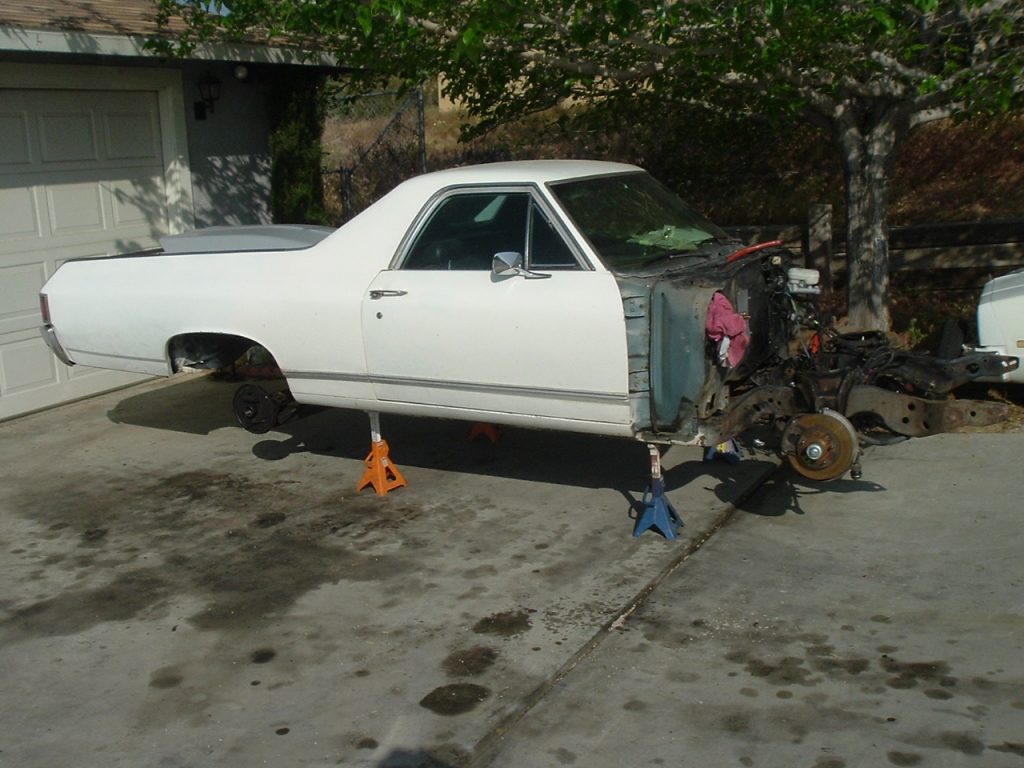 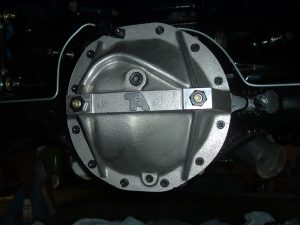 He calls back and it’s silent! Now he’s all choked up and apologizing for getting mad. I told him to just get down and help me for awhile. He’s down for about a week and redoes all the wiring on the firewall and now it looks much better. Now he sorta has an idea what he’s in for. I told him the AC, sway bar and all the extra crap is off the car for weight, being that he wants this thing to haul butt, he’s OK with my decision! Now he’s got to start kicking some money in too!

We send the rear wheels down to Eric Vaughn and have him widen them from 8.5″ to 10″ so I can fit a bigger tire.

The rear end gets an inch chopped off each side and Ford ends installed for the Moser axles. Boxed 4 link arms and a T/A girdle round all that good stuff. I had my friend Brian weld on the sump to the factory tank and coated it silver. Also added before I painted it all was an adjustable racing sway bar to keep the car from twisting at launch. With that installed, I had no room to finish running the exhaust all the way out back too.

Now it’s cool because dad is no longer bugging me about getting his car back. I made the radiator hoses, just to give it a little flair. Finished it off with silicone ends and t-bolts. Ended up remounting the fan relay, because it looked so bad. Also made braided hose for the power steering and designed the laser cut bracket to hold both the steering pump and the torque strap to the frame. So now what? 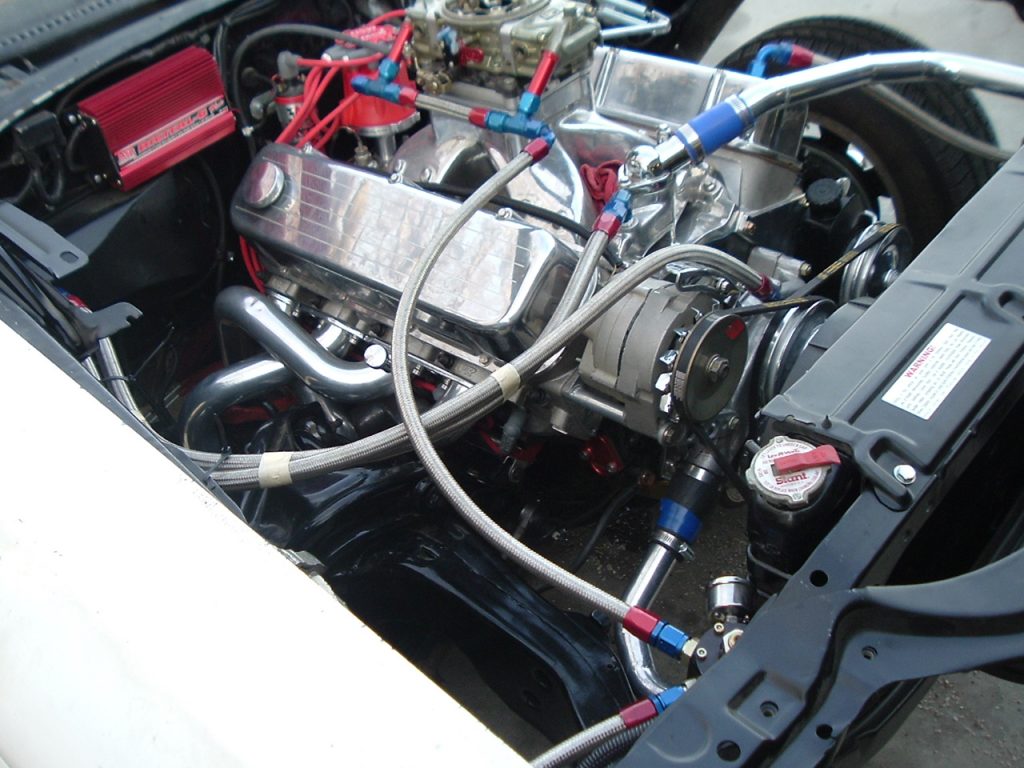 I’ve now decided I’m going to repaint it! Being a custom painter for the last 25+ years kind of helps in this area. I start taking everything down with 80 grit to see where I’m at. Holy crap, this car is really rough! I end up replacing both doors, the pass. fender and strip the quarters down to bare metal! I end up doing a panel at a time, stripping it and starting all over! NO end to the bare metal madness! 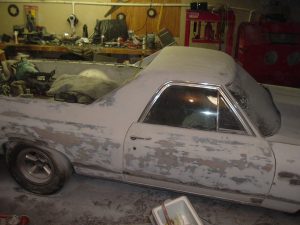 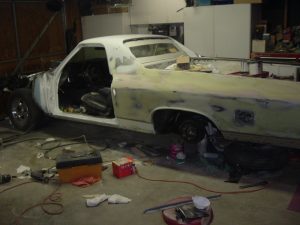 So now it’s ever so slowly (this is over months!) coming along. After priming and blocking (LOTS of different sized blocks) four times (lots of primer too) but now it was actually looking really straight! WOW! Now Dad knew I was painting it, but I just told him I was going to do it white again and do something cool with the cowl stripes. Simply because I didn’t think it would be anywhere close enough to do it any other color. Now that it’s actually straight enough to paint it ANY color, I make the executive decision to paint it blue! Dad wanted it blue, as Marina blue was the original color of the car and where it peeked through, he really liked.

I’d worked with custom painter Dick Vale for almost 17 years, when I was at this point and we’d discussed different designs and colors and decided that HOK True Blue would really rock on this thing! It’s a little darker and cleaner than the original blue and would look really nice. Game on!

Since I decided I didn’t want to tie up anybody’s paint booth for a week (my main gig is pinstriping and lettering, so don’t need a booth too often) I decided to convert my garage into a full on booth with lights, exhaust and filtered air system! It worked really well. 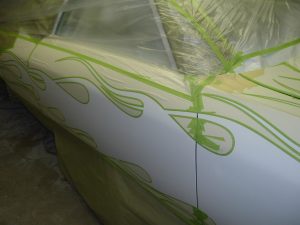 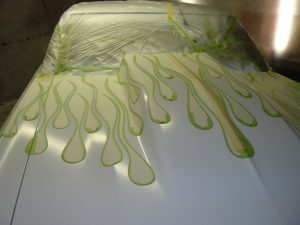 My parents came down to my other daughters graduation and I was hoping to have the car painted. Didn’t quite make it. Dad showed up to install gauges and help with other stuff (I’d lied to him and told him I was still working on one of the quarter panels, so he had no idea the car was ready to be painted!) I said no gauges, you’re going to help me paint! He looked at me rather strange and I said yes, paint. I said I’d lied (again, he’s a slow learner!) and told him we’re not painting it white either. We’re not? Nope, it’s going to be True Blue with FLAMES!!! Oh yeah, flames baby! He flipped and spent the next few days stuffed in my garage helping me paint his car! After basing the car out in white, I laid out and we masked off the flames. Flames are HOK pearls, so they glow! Once I sprayed the blue, buried it in clear and the car rocked! After spending numerous hours color sanding and rubbing the car out, it was really looking beautiful. Now to start putting it together. I had the bumpers re-chromed and scored some new grille trim. After installing new signal bezels, I ended up painting the black outline around the signals yellow because I thought the black killed the front. Did the back ones blue to finish them off. 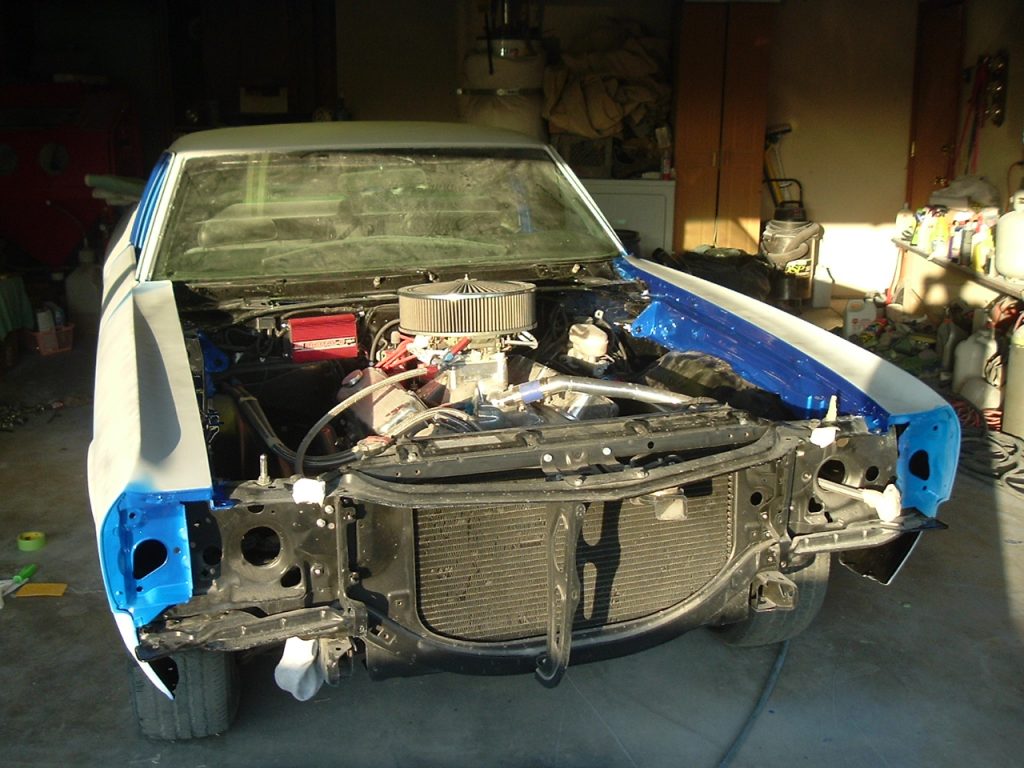 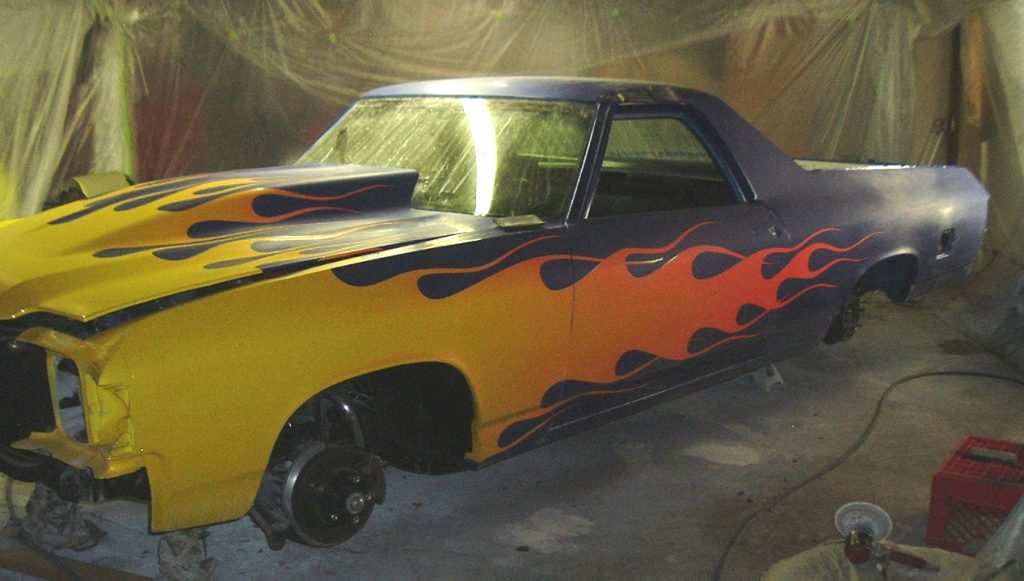 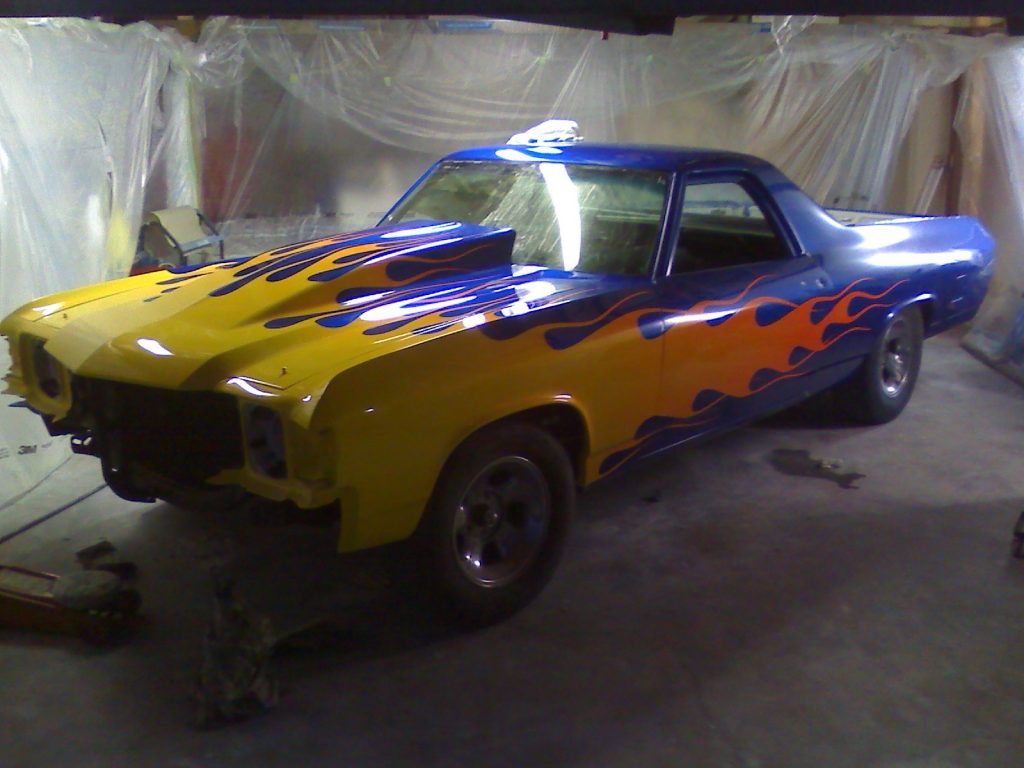 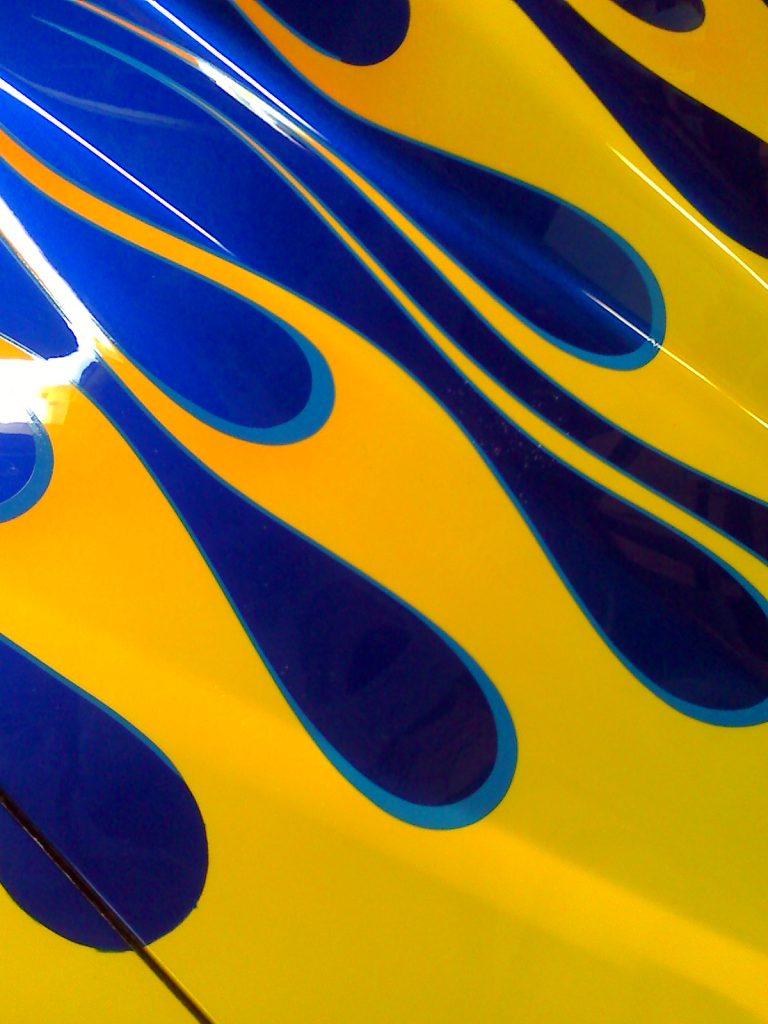 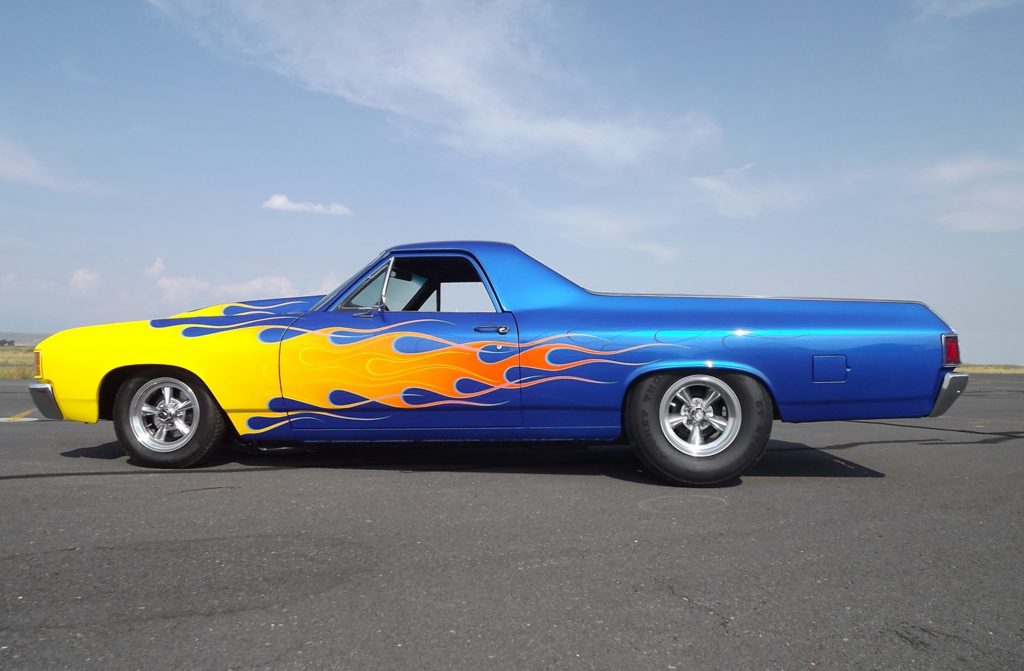 I pinstriped the flames in process blue and did yellow striping inside the flames. I then finished it off with dark blue pinstripe flames (outside of the others) all the way to the gas door! Went to the inside and recovered the seat in black/black cloth and vinyl. New door panels, rubber, channels, carpet, etc. Notice the shifter mount and use of the original column shift mount to hold the shift light! 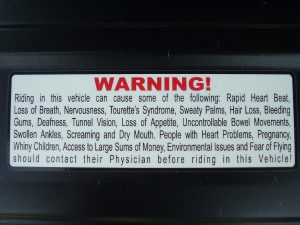 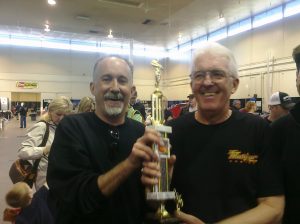 Mounted the transmission cooler and the battery in the bed to unclutter the front. I made a pattern and had my friend Ron bend up and dimple die some sheet aluminum for the back of the cowl opening. Finally, put 5″ wheels up front w/165’s and 295×65 drag radials in the back. I trimmed about 1/2 coil off the front springs and it looks as good as it sounds!

Took it up to Dad once it was done in August of 2009 and he had it in time for the big car show they have in town every year. He won his class!

In 2010, I went up to help him get set up in the Boise Roadster Show (his first real show). And he was ready! He built some really cool stanchions out of rods and pistons from his buddy’s Pro Mod car! Took first place in his class too! It was a lot of work over a period of 4 years but it’s been fun watching the world’s oldest 15 year old have fun!

…a little peek at how it sounds:

This is a 650 hp ’72 Pearl Blue El Camino leaving the 2010 Boise Roadster Show after winning “best in class.” It was built and painted by Brad King in his 2 car garage. The “paint shop” consisted of a couple of fans and plastic sheeting. Pearl Blue color is beautiful.

Flipping It Off: How The British Defeated Hitler's V-1