Treading Forbidden Ground is the Kustom of My People

THE FORBIDDEN-NESS OF THE PLACE

“The forbidden-ness of the place” is what made it “so compelling.” Greg Noll once said of his decision to surf Waimea Bay. In November of ’57, he conquered what was deemed an off-limits spot.   Surfing there was considered a no-no of sorts, stemming from the death of Dickie Cross there in 1943, as well as the sacred ruins in Waimea Canyon, and a house that the locals presumed haunted. All signs of surfing the almost unexplored (at the time) North Shore seemed to have a big red slash through them.

But on that fifth day of November, a drive was so great in the mind of one man, that he cast all superstition and fear aside, and rode some waves. He was quickly joined by Harry Church, Bing Copeland, Pat Curren, Mickey Munoz, and Mike Strange. Six guys who spent three years trying to draw enough courage to surf there. And once they did, they became legends.

(the first surfers to ride outside pipeline)ricky grigg, mike stang and greg noll.ricky grigg gets the wave of the day.from the surf movie blue surf-ari, a very rare flim from the 60’s

What’s any of this have to do with building or designing hot rods?

I get inspiration from a wide range of sources, and always seek to implement the ideas I get from those sources into a design, or piece of art. Mr. Noll is one of the people on my list of great inspirations, as he was a true pioneer in his craft, whether riding waves, or creating the boards to do so. While I could go on for days about his contributions to the surf industry, I’d rather concentrate on those few opening words from this entry.

SWIMMING UP THE MAINSTREAM TO SPAWN SOMETHING UNIQUE 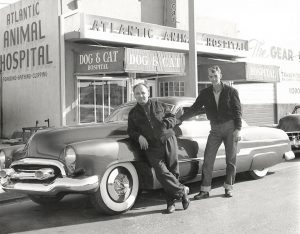 “The forbidden-ness of the place is what made it so compelling.”

Has there ever been a better way to describe the feeling of taking a torch to a car with the intent of creating something unique?! I imagine the late Sam Barris, contemplating the first cuts on his kustom Merc, or his Buick, for that matter… It was a visionary, bold move to drop the lid on either car, and yet, his decisions to do so spawned legend. And countless chopped tops to follow.

Decades later, some in the hobby/industry still embrace this pioneering spirit with the battle cry of “dare to be different!” Pushing the creative envelope just a bit further each time. It takes a big ol’ pair of stones to carve into something different, something not considered mainstream, and really have at it.

Of course, it also takes “doing it well” to be successful.

EFFORT AND A DISREGARD FOR SELF-PRESERVATION 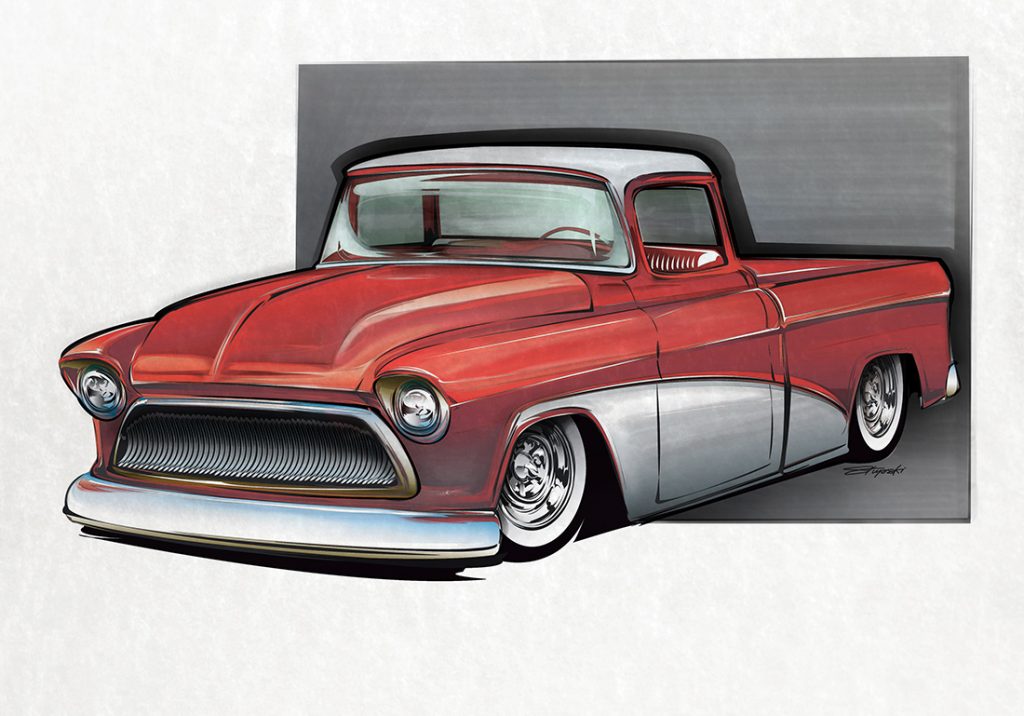 I enjoy developing a design that embodies this approach, taking a relatively forgotten and over-looked car, and just “having at it”, bringing in influences from all over the place. And that usually breeds an alternate version or two; perhaps one with a more track-ready look, or something a bit more on the “street custom” side of things. 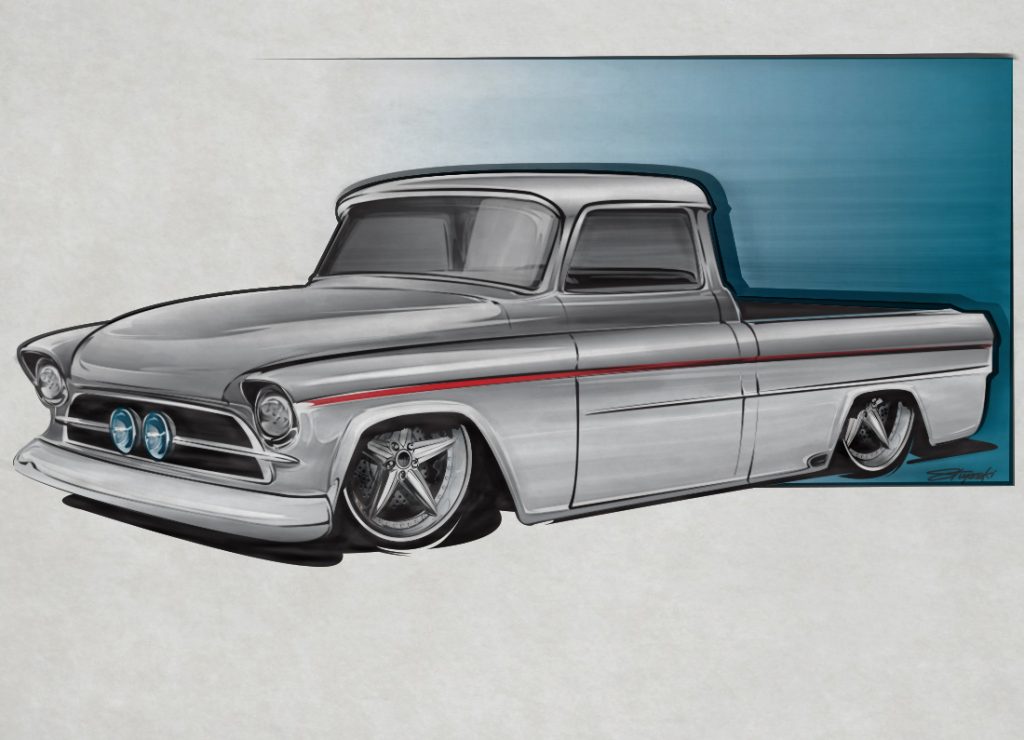 …and it’s very often cathartic, man. “You don’t do one of those,” I get told sometimes… Which only fueled the fire, as such challenges often will in those with a creative bent. I finished the roughs for the car, and began to think of even more rides off of the beaten path. I’m not saying that drawing this car even compared to riding Wiamea for the first time, but the excitement of taking a direction with it (that I’ve sat on for years) that is fresh sure packed, metaphorically, anyway, the anticipation of paddling out.

The point of all of this is simple: Be fearless and tread new or “off-limits” ground in search of new frontiers for your work.

PATIENCE IS A VIRTUE 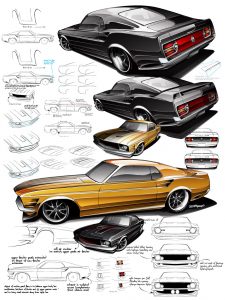 Much as Greg Noll waited five hours that day for the perfect wave, a lot of this treading new ground stuff relies on a certain amount of “hurry up and wait” fortitude. A big chunk of your design time will be spent researching and developing, and very often struggling to paddle out past the choppy waters. For all of the disheartening, soul-sucking stress these moments will bring, it’ll all pay off if you just hold out for that one perfect idea to provide your memorable ride. Literally and figuratively.

Be ready to throw hours and hours at this thing. And make no bones about it, you’re going to be burning some serious lean tissue on this endeavor.  You’ll be taxing that brain of yours, pushing it for all that it’s worth or hours, days… months sometimes. The trick here is in always reminding yourself that thy can’t all be zingers.

In fact, most of the stuff you come up with will suck. And that’s more than just okay; it’s effing wonderful. Some of my worst shit ha=s gone on to become the fertilizing topsoil that the really good stuff sprouts from. It’s like passing up a so-so wave in favor of gambling that the next set will be better. Throwing down an ugly hood scoop might just be the ticket to something that sets the whole project on fire. Be willing to take a few bumps and bruises and cuts to have the chance at being the hero on the beach later on.

In the design game, it’s all about knowing what tools to use, and when. The most traditional type of surfboard is the longboard, and it serves duty as the stand-by. It’s what most surfers learn on; where fundamentals are made habit. Much as you’ll rely on the core design rules for your styling exercises, think of these as your longboard. A traditional kustom would be a great example of this, an neatly ties in the earlier Barris reference. What once was radical becomes a staple.

Of course, you can always reach into your quiver and pull out a gun when the need arises. In surfboard terms, it’s the board you’ll use when you want to ride the big waves in grand style. It’s the fun sister of the longboard, and lets you bust a bit loose. In design terms, it’s the equivalent of stretching the rules just a bit to push the envelope.

And when you’re really looking to push things, bring out the shortboard (if you’re young). Designed for high speed and maneuverability, there are things a surfer can do on a shortboard that were never thought possible in the early days of the longboard. When you;re carving away at your design in shortboard-fashion, it’s rules-free shredding time. Channel your inner Kelly Slater and just go apeshit. Draw inspiration from everywhere, and just have fun. Keep those core principles you learned on the longboard in mind, but feel free to invent a few new moves.

It all just comes down to finding inspiration in unique places, and then summoning the courage to apply it properly. Not to mention boldly crashing though some previously closed doors along the way.

The Hills are Alive With the Sound of Suzy

The X-15: The Baddest Hot Rod in the Sky

Treading Forbidden Ground is the Kustom of My People