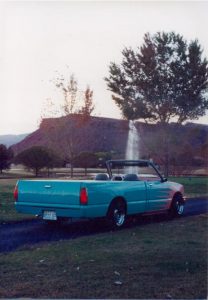 SNOB FROM WAY BACK

I learned a lesson in being a Hot Rod snob many years ago from a friend whom I still look up to. I’ve been recently reminded the error of my ways. Let’s head back to roughly 1989,  shall we?

I was in the mini-truckin’ scene pretty heavily. I drove a convertible Isuzu pickup. Two 15’s in the bed under a hard tonneau with a “crawl through” and of course – mint green paint with peach scallops! Looking back it was a hack job, but MAN was I proud of it! Chicks loved it, cowboys hated it, so you know it was cool.

I was hanging with my small circle of mini-truck friends at a show. We were kind of snickering (quietly) at a Ford Pinto that had been entered. Bone stock, horrid repaint (fresh paint, still fuming) and rainbow stickers poorly applied running from the headlight to tail light. We joked that the guy must have spent more on the $15 entry fee than the whole car. Danny sat and listened to us, never saying a word while we joked about it for several minutes like immature guys do.

HE AIN’T HAVIN’ NONE OF THAT

Suddenly, Danny stood up and made a beeline for the Pinto. What the hell was he doing? I followed, everyone else remained.

Danny approached the owner, an unusual small man in his late 70’s wearing week old clothes. He hadn’t shaved in about that long either. Danny extended his hand, introduced himself and asked about the Pinto.

The guy lit up like a Christmas tree – he was elated that someone had finally asked about his pride and joy.

He took Danny on a full tour of the Pinto. The old timer even explained he couldn’t afford to have his car painted, so he purchased a Wagner Power Sprayer and painted it in his car port. The rainbow stickers were for his grand daughter suffering from some disease. The sheepskin seat covers were a gift from a dear friend.

Folks, this car was bad. Real bad. Like something you’d find on Craigslist saying, “FREE, drive it away and get it out of my neighborhood before I get lynched!”

No matter, our elderly friend loved and had tremendous pride in it. I learned a lesson that day that I swore I would never forget. I have to admit I’ve slipped on occasion.

PIPE WRENCHES CAN BE MOTOR MOUNTS, TOO

Admittedly, I have no use for rat rods or the post-apocalyptic-Mad-Max-zombie-killer-rust-bucket they’re supposed to be. And I’m not quiet about it. Still, I try not to pick apart those rides (vocally or silently) because I know the owner must be proud of it and I have no right to criticize their creation.

Fast forward to the last couple of months and a renewed sense of humility. See, while hanging at SEMA with the Round 6 guys a high profile car was displayed. The builder is super talented and nails what I think is the quintessential “hot rod” with every single car he builds. But, because of a recent partnership with a shop I don’t particularly care for (build style, need for attention, shop antics and drama, etc.), I found fault with said car and turned my nose up at it. Interestingly, the car was well received by others, heavily photographed and has had countless features since.

Who was in the wrong? Who was a snob?

Because of a particular association, I neglected to see the car for what it actually was and just wanted to find fault with it.

So here’s to a renewed sense of humility and dedication to looking at cars for what they actually are, regardless of the politics behind them.