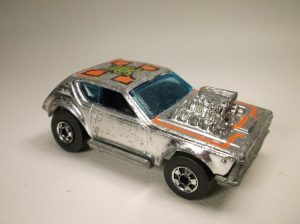 If I were to ask you to name the first car that really did it for you, the one car that sparked your interest in hot rods or fast cars in general, what’s the first car that comes to mind for you? I’ve asked this question a few hundred times in my life. And one overwhelmingly consistent answer seems to be a Hot Wheels car. Followed closely by either a neighbor’s bitchin’ street machine, a local kustom, and the always-present magazine feature car.

For me, there was always some interest in cars. It was and is in my blood. I’m convinced that it’s genetic. My kids love cars, and always have from the start. My parents were rabid car fanatics. It was working with my Dad on weekends and Summers that provided me with the skills to earn my own living during and after school in the parts and service side of the industry.

To look back on there being that one car that really sparked it all for me would be impossible. However, to pinpoint that one car that set in motion my love for a certain style of car, all memories lead back to my die cast car cases that I prized as a little kid.

THE FAST-TRACK TO IMAGINATION GONE HAYWIRE

It was in those cases that my imagination could just go haywire! Man… there was just unlimited potential in those vinyl, lift-out holders. Wild paint, huge engines, side pipes, mean, aggressive, almost profane stance… These were my inspiration. My time spent with these Hot Wheels that made me look at cars differently. A switch was flipped at that early age. Rather than just look at a car, I’d be mentally re-working it. Changing the paint, the body, altering the stance, just testing the limits of what could be done to make even the most mundane sedan riding alongside our car on the road into the baddest machine in the world. I’d escape into my own world of outrageous, fire breathing motor madness. And all was good in the world. 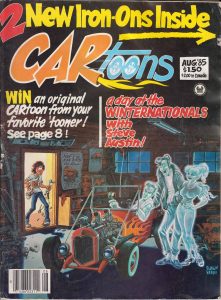 THIS CAR THING MANIFESTS EARLY ON

By the age of five, I was drawing a lot… I made it my goal to capture the mental images on paper, and tweak them from one extreme to the next. On paper, I could refine an idea, and learned the importance of stance, tire sidewall height to wheel diameter and wheel opening size ratios, the importance of color choices and more. I’d grab cues from these scale cars in my room, and just run wild. One idea would inspire countless others. I’d go through paper as fast as I could get my hands on it. Where my neighborhood friends were content to collect and play with cars, I was happiest creating my own versions.

When there was a way to scrape together a couple of bucks, I’d save for more Hot Wheels cars, or, once I’d discovered the madness between the covers, well, it was CARtoons or nothing, baby, even replacing my beloved MAD Magazine (we’ll get into my Mort Drucker and Don Martin fascinations some other time). Between the automotive insanity in CARtoons and the occasional Dave Bell cartoon I’d spy in the magazines at the barber shop, I just knew that there were others who shared my twisted fantasies and tastes. Guys like Trosley and Austin and Borden just pushed crazy physics and power to new levels, and Bell’s subtle tweaking and mastery of cartooned proportions folded my brain in exciting new ways!

Somewhere along the way, we all grow up, and our priorities change. We have things to worry about, like school, work, family… and in those changing time, we often lose sight of the little things we had as kids. The things that inspire creativity, that fill our days and daydreams and get us excited for a ride in the car seem to take a back seat. They get lost in the day-to-day tasks we need to finish up. Minds become clouded with lists, schedules, reminders and so on. The mundane replaces the fast. The stale replaces the exciting. Plain vanilla overshadows mile-deep kandy.

We reach for techno-gadgetry to handle small tasks and make things quicker, and put our brains into overdrive, reserving those few down-times to have some television program provide entertainment for us. Quick wit is replaced by repeating the one-liner from a sit-com, and creative tastes are inspired through advertising. Innocence and that “what if??” sense of adventure just seem to get swept under it all. We all go through it. I sure did. And it happened fast. 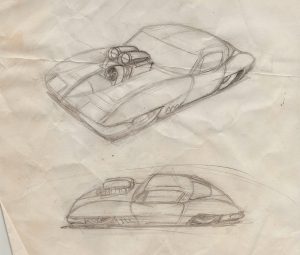 THE FAST TRACK BACK TO THE OLD DAYS

I made a conscious decision some years ago, while driving in to my then cubicle-based land of employ. I resolved that morning to just let my imagination run wild on my 70-mile commute… Not to listen to the radio, or go over notes and schedules in my mind. Rather, I wanted to just stretch the right side of the brain, and see where it took me.

I began looking at traffic with the same excitement I had in my youth. That econo-box next to me suddenly became this evil road racer, with IMSA-like bowed body panels and wild paint. The tow truck in the next lane took on some outrageous, CARtoons-like creation, with a huge blower and out-of-this-world size rear meats, with the tow boom swinging an oversized, chromed hook madly behind. My own ride became a Mad Max-like, post-apocalyptic street machine, racing for the next fill-up. I had found my own nirvana again. The worst of days was made brighter. “Just like the old days”? Oh, Hell yes.

At lunch, on breaks, during meetings, conference calls, whenever, I doodled, and began drawing again after years of neglecting that once vital part of my days. There I was, drawing again! I was having fun with it, and it was going in a million new directions. I was re-discovering what it was all about so many years prior. It wasn’t just fun. The freedom of what could be done on paper was a most welcome escape from what had to be done with paper each day. 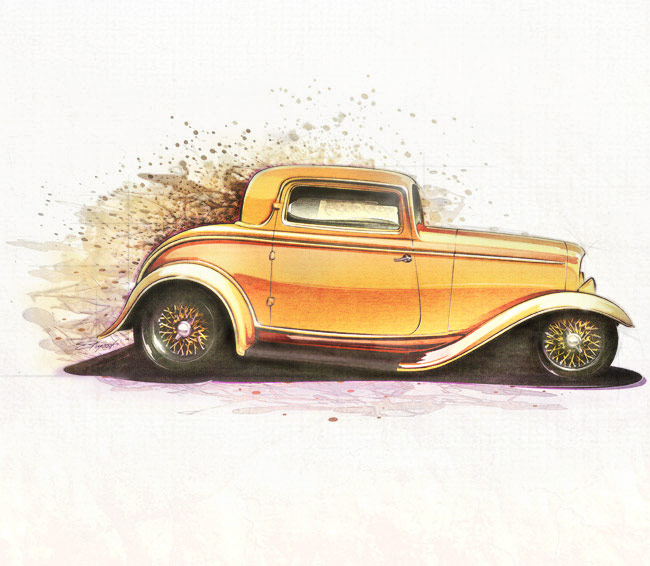 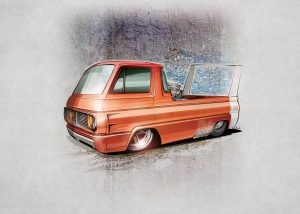 Fast-forward a few years, and I was designing project cars for clients at night and on weekends, and managing them during the day at a new job. My work had taken on a realistic appearance out of necessity, but the wild style within still wanted to play. One day in late 2006, I let it out in the form of the A-Tona, which I sketched up for a Truckin’ Magazine Radical Renderings feature. This little Dodge A-100 has been the one piece of my work that gets me more emails, calls, letters and requests for re-prints than any other I’ve sketched. It’s just got that something that makes people grin, and everyone just seems to get it. It’s fun, it’s irreverent, it’s obnoxious…

It sums up my earliest inspirations and daydreams in one bright orange, low-slung package, and looks like it just did something wrong… And, frankly, it doesn’t give a shit. It’s my inner child, street machine-style.

Let us know below in the comments what gets you going, car-wise. Could be a story about a guy who let you hang out and bench race, or a cool local car you saw, or even a piece of art.

Sketch up your wildest imaginary design for your daily ride, sort of like I described above. Just run wild. Have your thoughts run naked on a coffee buzz with a pile of cash through a Summit catalog (there’s some imagery). Your sketch doesn’t have to be amazingly detailed or in perfect perspective. Simply have fun. Not an artist? Even better. Just doodle away, and then scan, take a photo, whatever, and post it to our page. Easy as pie. Have fun with it, and let us help you get back to thinking about cars. Fast.