Miles Per Gallon may not always appear at the top of a car guy’s wish list. When driving a muscle car daily, it becomes a major part of your consciousness. Don’t get me wrong here; every car guy enjoys a stop at the pump. I mean it’s fun to talk cars with the neighboring pump’s customer. But constant treks to the station can get pretty old.

Being a bit of an engineering-minded car geek, I like to tinker. However, with respect to having a warranty, I needed to restrict my tinkering to either factory-approved mods and pieces, or just throw all of that payment-offsetting goodness when it comes to repairs. Playing the grown-up, I opted for the former over the latter. After all, it presented a bit of a challenge. I mean anyone can just bolt some parts on and have a little fun. I was out for measurable improvements while still being able to appease my tinkering geek nature. This single Dad tends to be a bit responsible, and does not have an unlimited budget by any stretch.

That meant playing with a combination of parts to make each piece better than was intended originally. Think “Dr. Frankenstein, but with far better raw materials at his disposal.”

My plan was to start at the top, and work my way down and then to the back. Kinda sexy, no?

Mission one was to start with the air box. It’s pretty good from the factory, just needs a tiny bit of improvement to be stout. And I was not about to drop a ton of coin on some inflated-numbers aftermarket snake oil-encrusted voodoo garbage. This had to look neat, clean and close to factory. I’m not building a show boat, kids… I’m building a clean, low-key sleeper. Well, as much of a sleeper as a ’16 Challenger R/T can be, anyway. I went looking for a little more power and a few miles per gallon. I’d get both in spades. 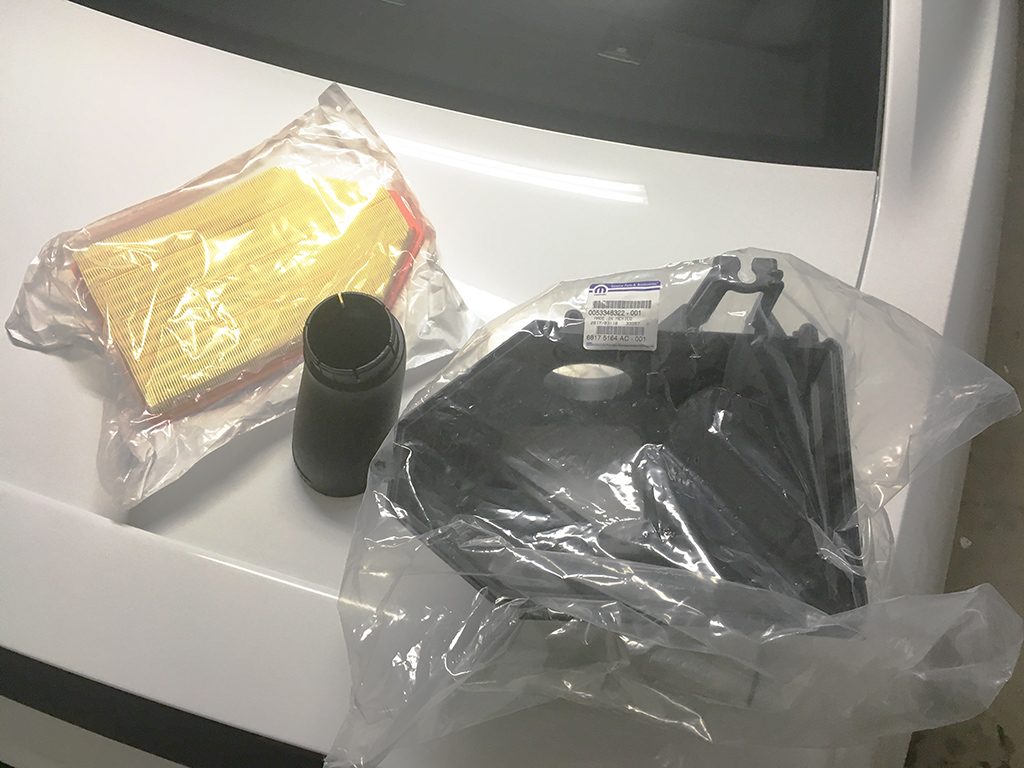 TRUTH IN THE NUMBERS 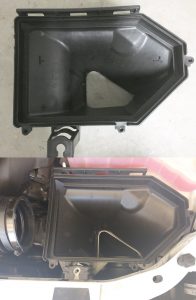 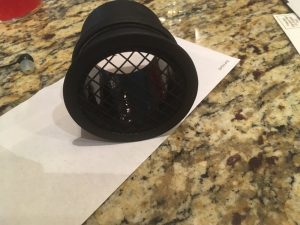 Stock air box top, Hellcat box lower. Note the increased volume, especially at filter plane; the stock filter quite literally sits with 1/3 of the surface area resting on that ledge.

Much more volume in the box (8.7L of air available at WOT) means increased pressure drop, more air flowing over the surface of the filter, and a filter that flows better than stock even when dirty (roughly 1100cfm clean, just over 700cfm filthy). Add to this the ram air/cooling effect from the inner lamp opening, and we’re dropping inlet charge temps (via heat soak reduction time). That alone can net a solid 7-9HP consistently. And that’s the key word in any bolt-on. CONSISTENCY.

Some people are all about that bass… I’m more of a volume fan.  And letting the 5.7 breathe is really where the secret lies. The have bigger lungs than you may expect.

At around 1/5 of the retail cost of a cold air intake (CAI), this swap can be completed using all factory parts. Although I had opted for an AFE Power inlet tube (molded plastic versus the factory pressed cardboard) and a DIPS screen to keep debris out.  You could effectively perform this swap for under $60, and then bank that leftover cash for a tuner later on.

Next time, we’ll discuss the physics of retaining that silencer-equipped inlet tube, and the long-term benefits of this roughly 30-minute DIY, (mostly) factory-part upgrade, and see what she does with that Stage 1 PCM (and a few additional tweaks to the code) and some exhaust work. 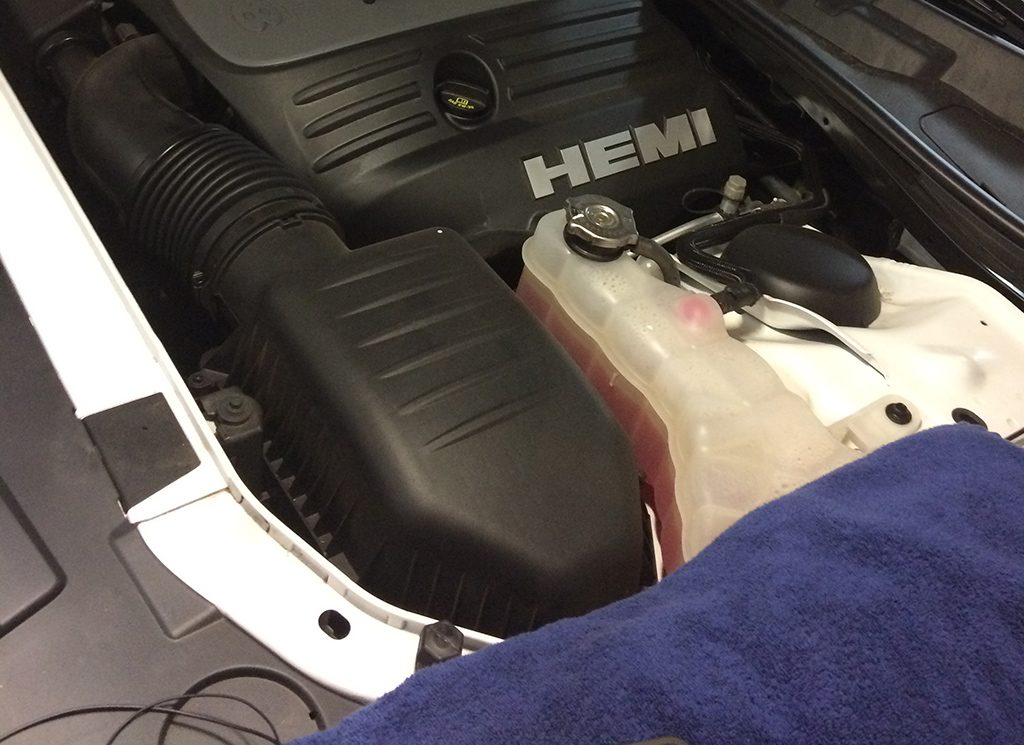 THE MILES PER SMILES VERDICT 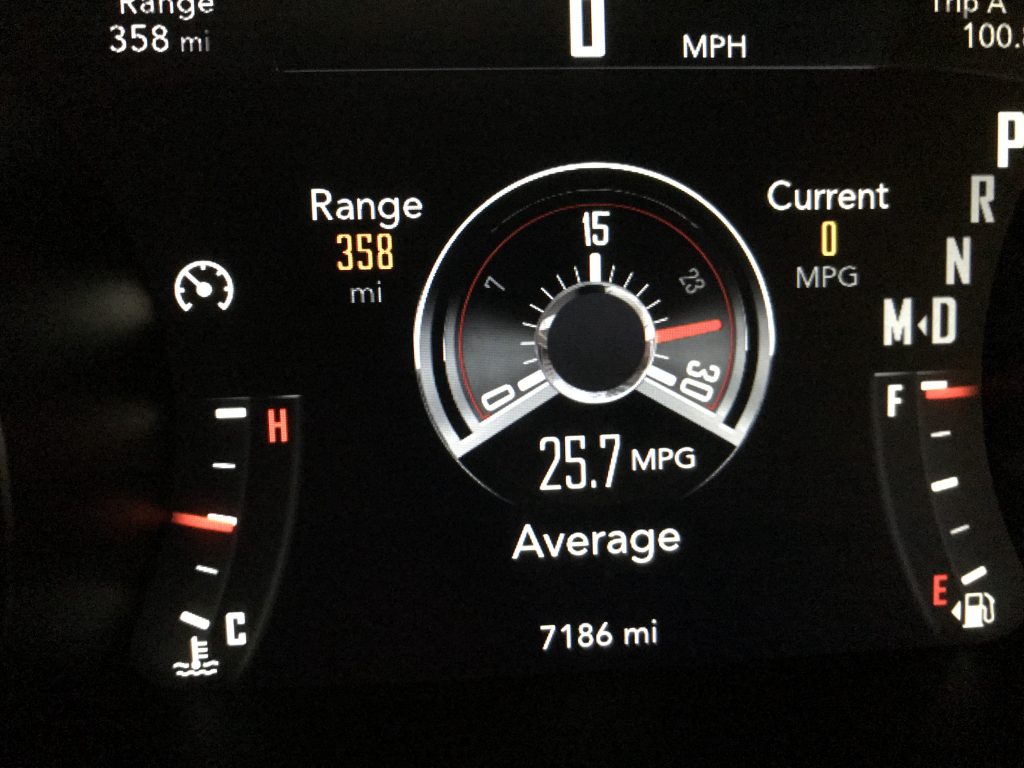 I’m pretty happy with the results. For a small investment, parts- and time-wise, I’ve had some noticeable gains in both performance and especially in fuel efficiency. Coincidentally, these were just the things I was looking to sort out.

Aside from the one-second 0-60 gain (and nearly 20 MPH top-end stretch – as tested on a private, closed course in Mexico), the miles per gallon gains are insane. Rated at 16/25 on the sticker, I had only been able to pull around 20 MPG driving like a nun on Quaaludes.

Fuel economy was the biggest gain overall. With everything settling in neatly, she’s pulling down nearly twenty-six miles per gallon with adult driving (this is surface street AND freeway combined, along with occasional “spirited” stoplight blasts). Not too shabby at all, my friend. 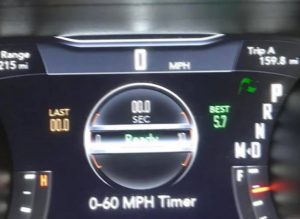 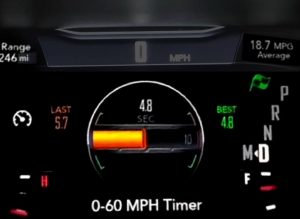 That makes the performance end a bonus any way you look at it.

Being fortunate to live in the Southwest, our weather is pretty consistent this time of year, and it made it easy when keeping the testing fair. Prior to the swap/mod, I had tested the car on that closed course in Mexico mentioned above, where the zero to sixty times were right in line with what was advertised, around 5.7-seconds all day long, with very little variance.

Post-mod, I managed to dip the car into sub-five second territory, ripping off four consecutive 4.8-second blasts from a standing start to sixty miles per hour. Not exactly Scat Pack territory, but that wasn’t the point, and this is but one tap on the door. With the PCM and exhaust, we’ll nudge closer to 392 territory. Again, the point isn’t to build a 5.7 R/T that can run fender to fender with a 392 Scat Pack. That’s just not a budget-friendly goal.

Since January, I’ve piled about five thousand miles on the Challenger, and done a few more tweaks. The first has been the Scat Pack Stage One PCM. The largest single investment, parts-wise, and while a milder choice than a Diablo or an unlocked PCM, there was logic in this choice. First was retention of the warranty for now. Again, single Dad, warranty, speed isn’t my number-one priority at present. And having worked the deal, a sub- $600 investment out the door (parts, install and flash labor for just about an hour total at .5 for the swap and .4 for the ETC re-learn) was just in the ballpark. Besides, we’ve kept everything close to factory parts already… why not, right? 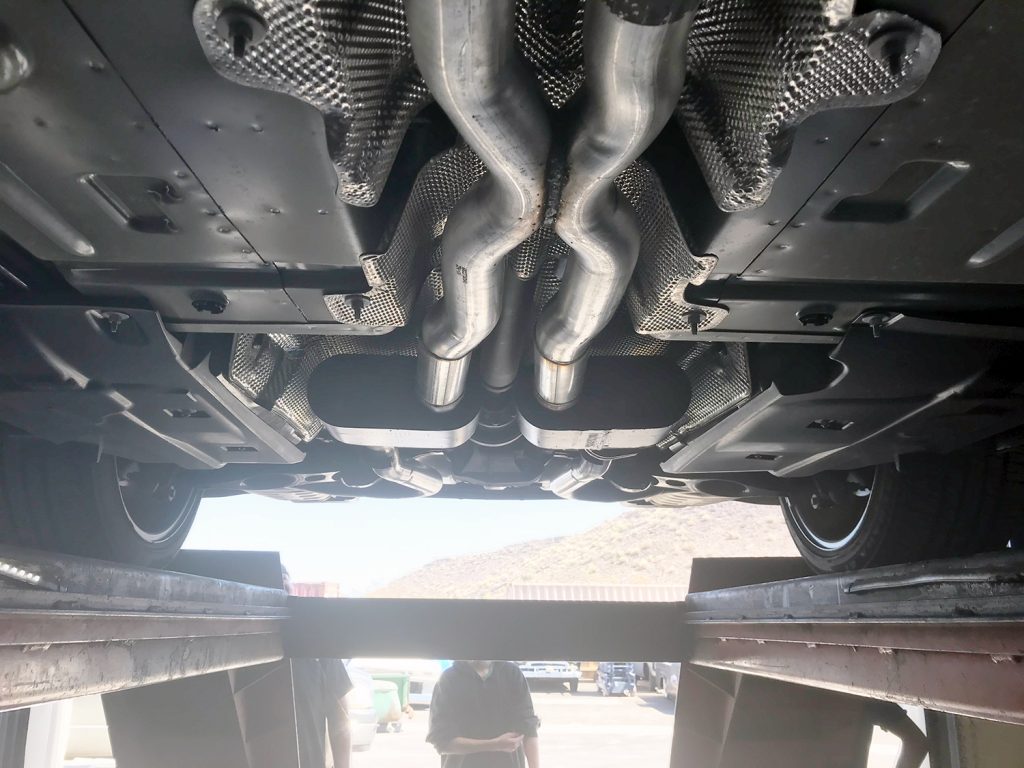 I followed this with very careful deliberation with regard to the exhaust. I did not have the budget for anything exotic like short-tube headers or a full-on exhaust, so I looked around, and determined the sound that I was after. As this is meant to be a sort of “gentlemen’s hot rod,” the sound had to be mellow at idle, have some bark when opened-up, and still play nice with the MDS. That meant leaving the resonators, and doing a muffler swap. I opted for a pair of Flowmaster Super 10’s, as they were the most aggressive, but would be tamed considerably by the remainder of the exhaust for now. A sub-$300 investment total, and things were sounding gentlemanly hot-roddish.

At an advertised fifteen horsepower gain from the PCM, the chances of feeling that as some kick-in-the-pants power adder were negligible. However, the changes in the car’s demeanor are readily noticeable! Throttle response is greatly improved (something that could have been accomplished with, say, a Throttle Commander, certainly, but it strikes me as just a gimmicky toy to speed the throttle signal, and I was trying to take advantage of the mild intake and exhaust mods). And the power band seems a lot broader and smoother. It’s definitely making use of the free(er) flowing intake, and while the exhaust is not optimal, it’s providing some gain. This will be rectified in the next round of mods to the power train, following lowering. 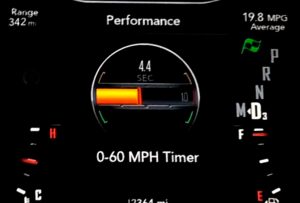 As stated, the throttle response is greatly improved. The car feels like it’s in Sport Mode right out of the box. Awesome. This was a fantastic improvement, and one of the things I was looking for, so I’d have been happy with that. The smoother, wide power band makes my day. Low-end has a slightly improved feel, and I was initially convinced that it may have been wishful-thinking or the placebo effect; tests proved otherwise. There’s an improvement… It’s not huge, but it’s there. Where the car really shines now is in that 60-90MPH (as tested in Mexico on a closed course). The car pulls like an animal. It sounds respectable and not obnoxious, and the fuel economy needs more testing, as we’ve been pretty hard on the girl, and will do more moderate driving to get a better idea of where she’s at in the next update.

And while we’re not batting SRT numbers, we’re well within spitting distance.

In the batter’s box are mild lowering, Scat Pack front valance, Hellcat wheels and 305/35/20’s, as well as a few other cosmetic upgrades, just because. On the wish list are a 6.1L upper intake, throttle body tweaks, long-tube headers (and better exhaust, but that’s all dependent on budget, time, and other fun grown-up stuff) and even gearing…

PARTS AND OTHER INFO

If you’d like to perform this quick mod yourself, I’m including  all of the parts and source info here. Again, you could re-use the factory 5.7 air filter element, and disregard the D.I.P.S inlet screen to keep the budget super tight. The above gains were realized using the additional parts.

I had opted to only use the lower Hellcat air box, retaining the stock upper cover, as the shape of the Hellcat unit is designed more toward gains using a supercharger, which I am not.

Please feel free to hit me in the comments below with questions, comments or suggestions. Stay tuned as further fun continues with Project Life Partner. Would love to see what you’re working on as well, and you can share your pics, mods and tips over on our Facebook page, if you’d like!