THIS IS FOR YOU, MA. 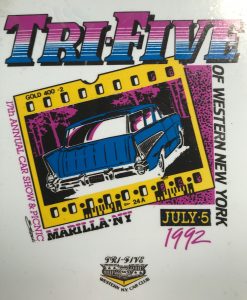 Let’s step back a number of years before I was commissioned by Holley Performance Products to create a poster piece for the 2017 SEMA Show, where RJ Gottleib’s Big Red Camaro would appear in their booth, and go backward to my fifteenth year on the planet. 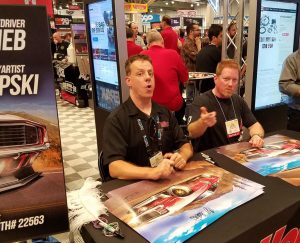 My parents were heavily involved with their car club, the Tri-Five of Western New York. So involved, in fact, that my mother was running the annual car show. Fortunately for me, it opened a door to creating the t-shirt and poster art. As a budding artist, this felt like the opportunity of a lifetime. I mean what kid who was always in trouble for drawing cars in class didn’t want to see his work on hundreds of shirt and posters and mugs and awards?

For a few years, I drew the posters and tees. I eventually started doing them for other clubs and clients. I used the experience to get to know the printing process. My logic was that knowing how to prepare the art for screen print or litho or otherwise would only give me an advantage later on. Good thinking for a kid!

My mother passed relatively young, and never got to see where all of that early work led. I’ve always kept her in mind as I began a new project. The Big Red poster was a big one for me, as it held a ton of meaning in this light. 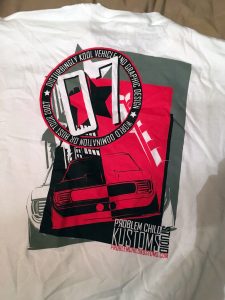 Back in 2006, I had attended the first SEMA Show under the Problem Child Kustoms Studio name. Not my first trek to the show, but the first I had done so under my own banner. To commemorate the event, I had a few tees made, one of which had on it, coincidentally, a red ’69 Camaro. It just seemed like the right artwork to go with, and it fit the mood and attitude present in launching the whole thing.

Now this may not seem like much on the surface, but consider the weird foreshadowing at play. 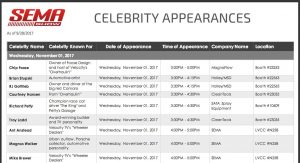 As we walked the show floor that year, I had made a mental note about how I would need to promote and progress in my work and career, and vowed openly to my father that within ten years, I had wanted to make a name for my work, and return to the show  as a known entity in the industry.

Through hard work, some good fortune and a lot of sacrifices, I had managed to make a name for my work and myself, and became pretty well-known for my design and illustration skills and handiwork. Not a bad deal at all.  And for the 2017 SEMA Show, I was returning as a “celebrity.” Way cool! 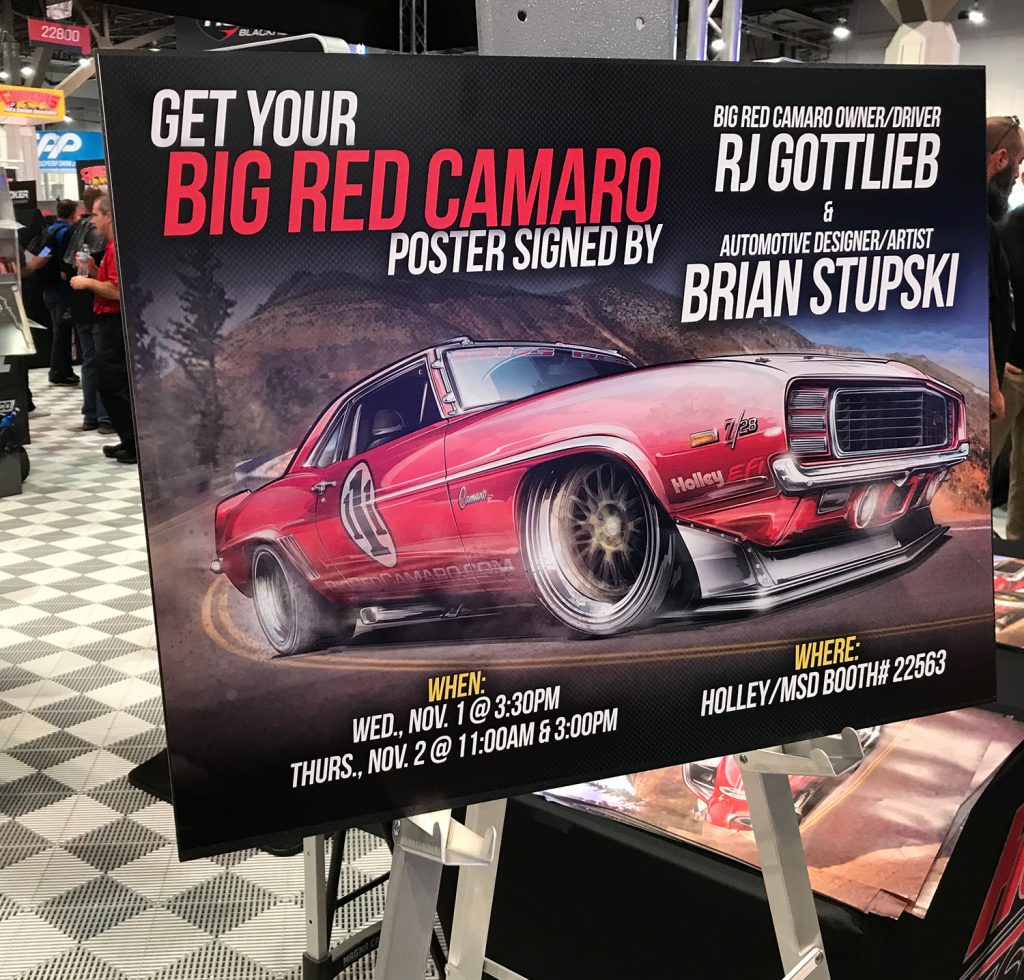 What was making things all tie together, though, was that tee from 2006. I’d be appearing to sign a poster featuring not only a 1969 Camaro, but the very car I’d worshiped and been busted for drawing in class so many years ago: The Big Red Camaro. I have said it before and will repeat it here: All things are delicately interconnected.

GET ON WITH THE ILLUSTRATION!

I thought it might be fun to go over the process involved in creating the poster… From concept to completion, as it were.

The idea was to celebrate the iconic Camaro’s recent conquering of Pike’s Peak, and I instantly had a vision of where I had wanted to go with the artwork. Normally, I’d rough a few thumbnails out to get an idea of the angle of the car and overall composition, but this one I could see in my mind’s eye as clear as day. The art would be dramatic, but from a different angle than my usual work; it had to be. This piece would symbolize my return to the show, and being in a different place. It would pay homage to my always looking up.

STAYING INSIDE OF THE BOX 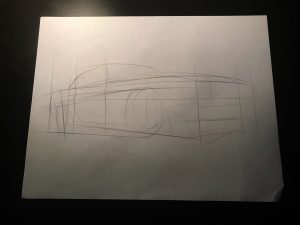 I start every illustration the same way, with the tried-and-true box method. It helps to nail the perspective and proportions, and is a nifty way to get the overall composition on paper. If, like me, you grew up reading CARtoons Magazine, then you no doubt studied George Trosley’s How to Draw articles. I learned more about form, perspective and nailing proportions in my drawings from that than I ever did in art school. No exaggeration there. Starting with a simple perspective box and then carving away everything that wasn’t the Big Red Camaro, I had a solid place from which to begin crafting my homage. But I would not be leaving everything in some photographically-perfect reproduction. There’s no fun in that! The basic box was only to serve as a guide. I’d be tweaking reality just enough to make it kinetic. 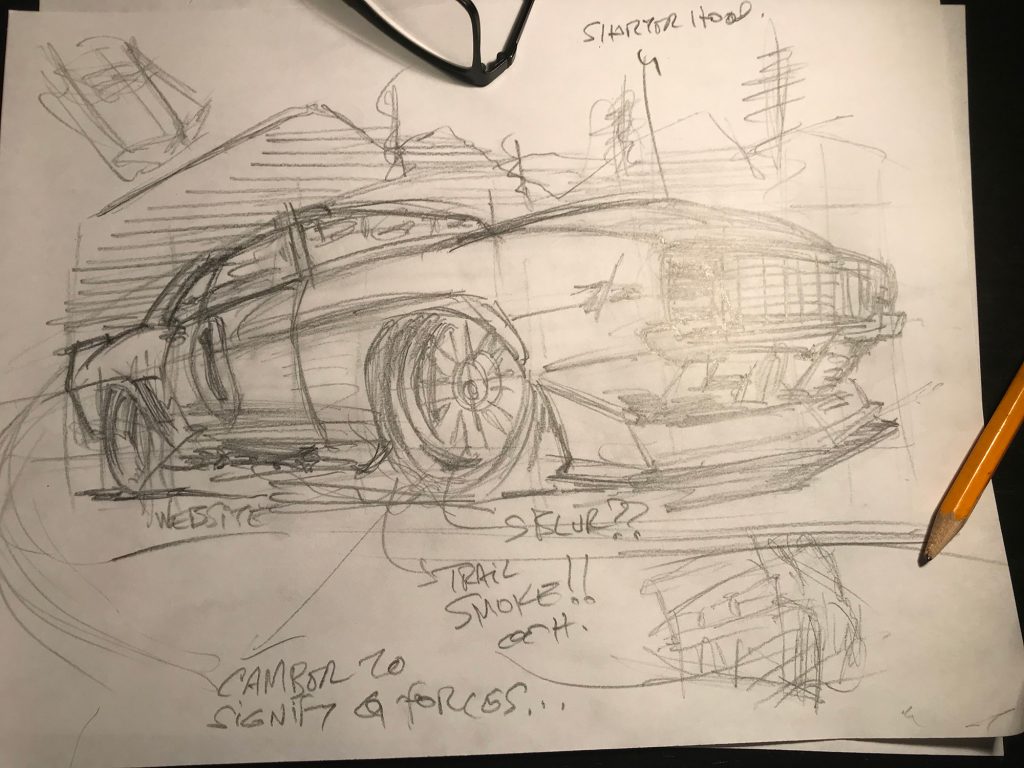 Once the general perspective was on paper, it was a matter of chipping away at the block to get the car to materialize. A lot of time is spent at this stage just working to get the essential in place. While not a fully detailed illustration, it’s a tighter guide to keep things in the right place for when I do get going on the little stuff that makes it look “real.”

I’m also placing notes and figuring out the rest of the composition at this stage. There is a lot of lean tissue being burnt here. I’m working to present action and motion and set the stage for the next steps. 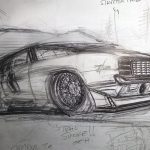 Next, I start to refine the major lines, and work to move the eye through the composition. It’s important to have this in mind from the early stages. It will determine how and where you add your details. Having focal points throughout will create the rhythm for how the viewer’s eye walk across your canvas.

I’m working to balance the imagery with the background at this stage. I’m placing (and moving!) mountains and trees and clouds both in my mind and on paper. The great part about this stage is getting to change everything up with a few strokes of the pencil or the eraser.

My next step is in Adobe Illustrator, where the real work begins. I complete approximately ninety-eight percent of my work in Illustrator, as I love the software. Getting to work in vector is forgiving. It’s a challenging and a unique way to represent how I was taught to paint with oils in school. But before I can get to the color and lighting fun, I have to nail the basics, and get the lines down. I do not use brushes or presets here; I opt to work with the basic pen tool and a mouse here. It’s all about keeping the hand-drawn and energetic appeal of the original sketch. Any shortcuts here would undermine the whole thing.

STAYING BETWEEN THE LINES

It’s now time to start playing with the forms, getting some shading in place before the color and highlights can be dropped in. I simply select where the main and secondary light sources will come from (the sunlight, reflected light from the pavement, any environmental dispersion, etc). I then block out where any shadows would fall. This defines the form of the car, and starts to build some mass. A lot of time and thought are put into the illustration at this stage. It will pay off HUGE later on. There are no shortcuts here. Just a knowledge of the car, its surroundings, and how they all inter-relate.

This is where those life drawing classes all start to make sense. If you’ve ever had to draw a plate of fruit or a vase or dozens of spheres, you’ll thank your instructor. I like to throw my own spin on things here, and make light bend to my will. I’m not only thinking about the general shape of things, but how the light and shadow will work through the paint. After all, the photons will be bouncing around all of the atoms in the pigment, and neat things will be happening all over the place. This creates some subconscious visual excitement.

Next, I start to block in the trim and other little details, all while adding some highlights and reflected light. This is every bit as important as blocking-in those original forms, and leans heavily on the foundation I had put down earlier. Everything needs to balance and work in harmony to appear realistic but stylized. I’m not aiming for photo-realistic; it’s not what I do. But I have to sell the idea that this whole illustration could be the real deal in a dimension where things look like my art.

As I work out the main highlights and shadows, I’m paying very close attention to the reflective surfaces. I don’t yet have the environment created, but I know enough from my mental image to get the basics in place. I’m only concentrating on the general shapes and forms, and only the parts of the car that will reflect back into parts like the handles, nameplates and bumpers. This will save a ton of time once I start building the world around the car, and give me a solid platform to dive off of and incorporate the road, trees, mountains and sky. It’s all in the planning.

…and all of the paths selected, just to give an idea of the work involved to this point.

Now that the basics are in place, I start to build the environment. 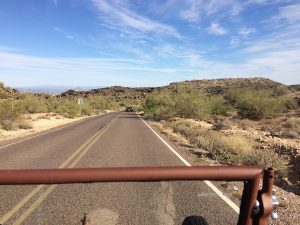 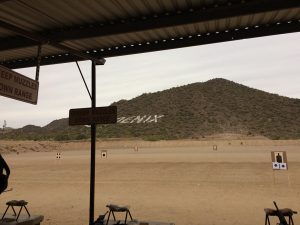 While I simply could not make the trek to Pike’s Peak, I had planned re-create a version of it here in the studio, and I’ll do so using some references of the real locale, and replicate it with my own spin, dropping in local textures and imagery. As the car would be in motion, I had some wiggle room to fudge a few details.

Having mountains and roads and trees at my disposal, both just outside of my door and in my file archives from trips, I can build just about anything in Photoshop…
And that was the plan. 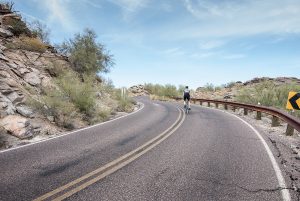 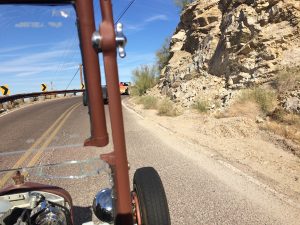 Taking bits and pieces from photos I’ve taken, I went looking for textures and elements to build my own version of the peak. I was going to have to cut, paste and stitch my way to the fabled Peak. This is where the real fun begins. The story will be told in the compositing of the car illustration and where it “lives.”

We’ll get into the process in another tutorial. It’s quite involved, and would take far too long to explain here in a single post. If you’re interested, let me know in the comments, and I’ll put together something on the subject. Perhaps a full-on how-to. Having some extra tools in the box never hurt anyone. Being able to manipulate imagery to create a setting for your illustrations adds a whole new dimension to your work.

I will say, though, that little compares to making Arizona a stand-in for Colorado. I felt like the film directors from the old Western movie days, making Arizona into Texas and Mexico. In total, I used about two dozen images to create the final plate for the illustration. 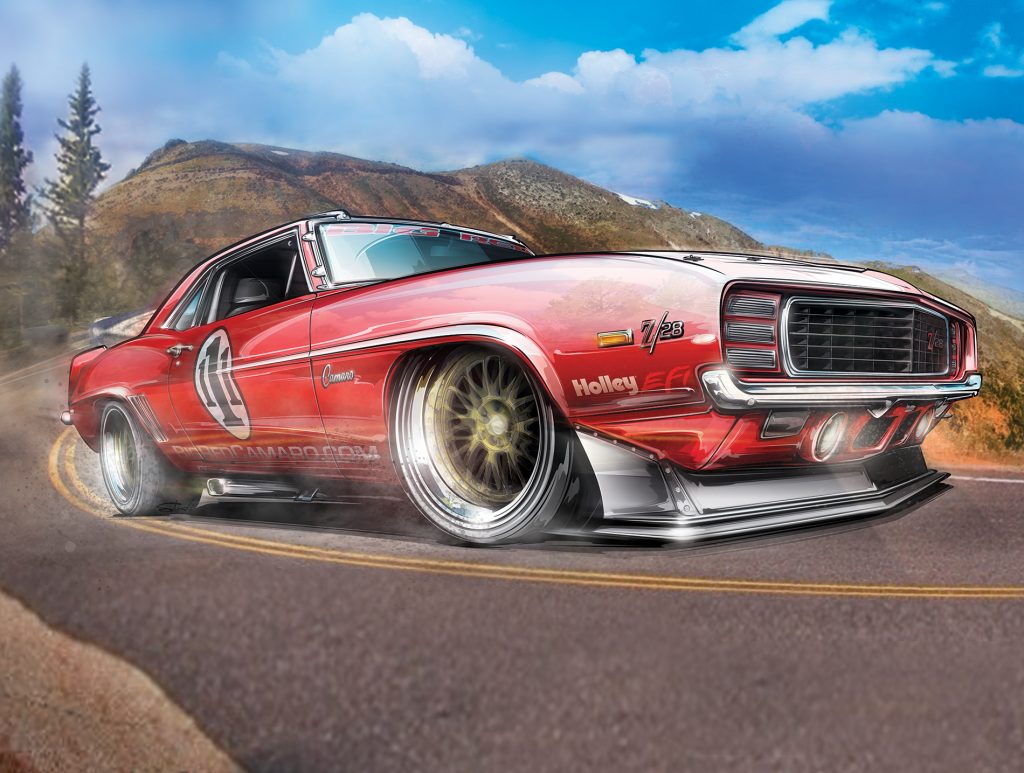 A present for little Katie