All things Hemi are delicately interconnected.

A FIVE YEAR OLD SETS OUT ON A FORTY YEAR QUEST

I’ve had this shred of paper hanging over my desk for as long as I can recall, and the words on it have always proven true.

I was but a toddler when Steve Lisk’s brutal ’71 Hemi-powered Challenger (it was originally a 383 car) prowled Woodward Avenue, yet that car carved a place into the foundation of my car guy-ness. My introduction to that car came via a feature in Hot Rod Magazine and a trip to the barber shop. I’d bet that not many people can connect a lifetime fascination with a particular car with a visit to the local barber shop when they were but five years old. If you can, I’d love to shake your hand, as we share an eerily similar past! 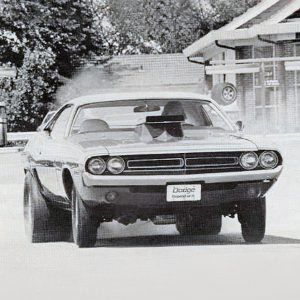 For me, it was around August of ’77, and my Dad had taken me to Bob and John’s Barber Shop for my start-of-the-school-year haircut. What was great about that place (beyond the cool guys who ran it, and those who seemed to populate that place, and the foosball and pinball tables upstairs!) were the stacks of cool magazines in the waiting area. They had what seemed like everything! The learning potential in that barber shop was mind-boggling. Whether you were listening to the conversations, or reading about some far off land, or even witnessing the skill of some pool shark, I had a theory that someone raised in that place might be overwhelmingly well-rounded in the art of street smarts.

Speaking of street smarts, I happened to grab what in hindsight, anyway, was the perfect magazine at the perfect time. For in it, I glanced upon a car that would leave ripples across my brain. I had asked my Dad what this ‘Woodward’ place was, and thus began a series of tales of this amazing street where hundreds of cool cars would drive, and occasionally engage in a grudge match. To my 5 year-old brain, this was a magical land! Had you offered me the choice between a playground made of cake and candy or this Woodward Avenue, you can bet that we’d be stopping to fill the tank. The more I thought about it, the car in that magazine grew on me. It sparked a dream to one day be like the owner of that red Challenger, and cruise Woodward Avenue in a Hemi Challenger. Hell, talk about fate… When the Challenger concept was unveiled back in 2006, it was as though the universe had agreed that I damned-well should have one of my own. So it took me nine years deep into the model run to grab my own… But that same universe provided me with a career that made it possible. Talk about delicate interconnections. 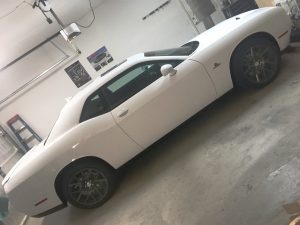 It may have been three decades in the making, but a couple of years back, I realized the dream, thanks to Dodge and my great friends over at Ignite Social Media:

In a Hemi Challenger.

All things are delicately interconnected. There it was again. From a simple one-thousand character entry on a whim, to a stop at the NY International Auto Show, to realizing a childhood dream. Weird how things go.

Heck… I walked around and talked cars with Steve Magnante. A magical land? Oh, you only know part of it.

While we’ll get into some of the stops we made at historical plants and places around Detroit in later posts, I have to share the magical interconnections of that half-week. You just know that things are going to go well when you’re scooped-up from the airport in a Challenger Blacktop (Track Pak car, no less!) by one of the great friends you’ve made on this amazing journey (thanks, Eric!), and the first stop you make is Vinsetta Garage. At that point, the cosmic interconnections became even more vivid.

Standing in front of Vinsetta Garage on Woodward, I took a few moments to ponder the history, the incredible iron that cruised that fabled stretch of blacktop, and just smiled. That day in the barber shop came flooding back, and all seemed right in the world, accentuated by the rumble of cars passing, the scent of high octane, and just being back with the friends I was fortunate to make as a part of writing for the Dodge REDLINE Blog.

HELLO FATE, I’M BRIAN. WE MAY HAVE MET.

And then cosmic coincidence turned and winked at me. All things are delicately interconnected. 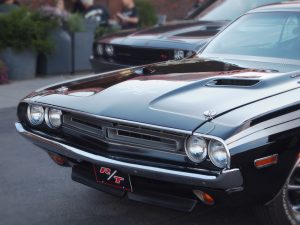 Tim Kuniskis, CEO of Dodge, pulled up in his personal 1971 Challenger. My brain melted a bit. There I was… this lucky guy who wound up in a place he’d dreamed of as a kid, hanging out with people who just ‘get it’, drawn there by chance, having a love for the history surrounding that red ’71 Challenger, and now the CEO of Dodge is pulling up in his ’71 Challenger. Coincidence? Hardly a chance. Add to it that both that red, Wodward-dominating monster mentioned earlier, as well as Mr. Kuniskis’ beautifully restored black R/T began life as 383 cars, and each sported fire-breathing, modified engines, and the list of cosmic oddities was growing by the second. If there were ever a place which, car-related, anyway, I was meant to be, it was right there, right then.

On Friday and Saturday, I lived my dream of cruising Woodward in a Hemi Challenger, and enjoyed every single second of it. Not having found the time to have ever taken my personal car up to Detroit for the event, I did suffer a slight twinge of guilt, as mine sat back home in the garage, a couple of thousand miles away… 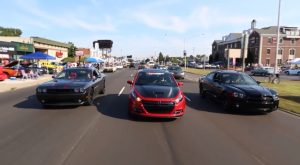 Yet I digress. As many have said, it’s a thirteen-mile traffic jam you want to be stuck in, and it was nothing shy of amazing. I saw great cars, met some fantastic people (even made friends with a gentleman who, get this, works at the plant where my Challenger was built!), and made another huge batch of memories. It’s been like building this giant layer cake, adding friends, memories, and dreams realized to an already astounding recipe. Yeah… ‘Dream Cruise’ is a fitting name for it. All things being so delicately interconnected, I’m beginning to see just how strong those bonds can become, and can honestly say that I’m stoked to be a part of these many links fitting together so neatly.

The story takes an interesting turn in August of 2017, when I received an email here, via the website contact page. The Lisk car was available. 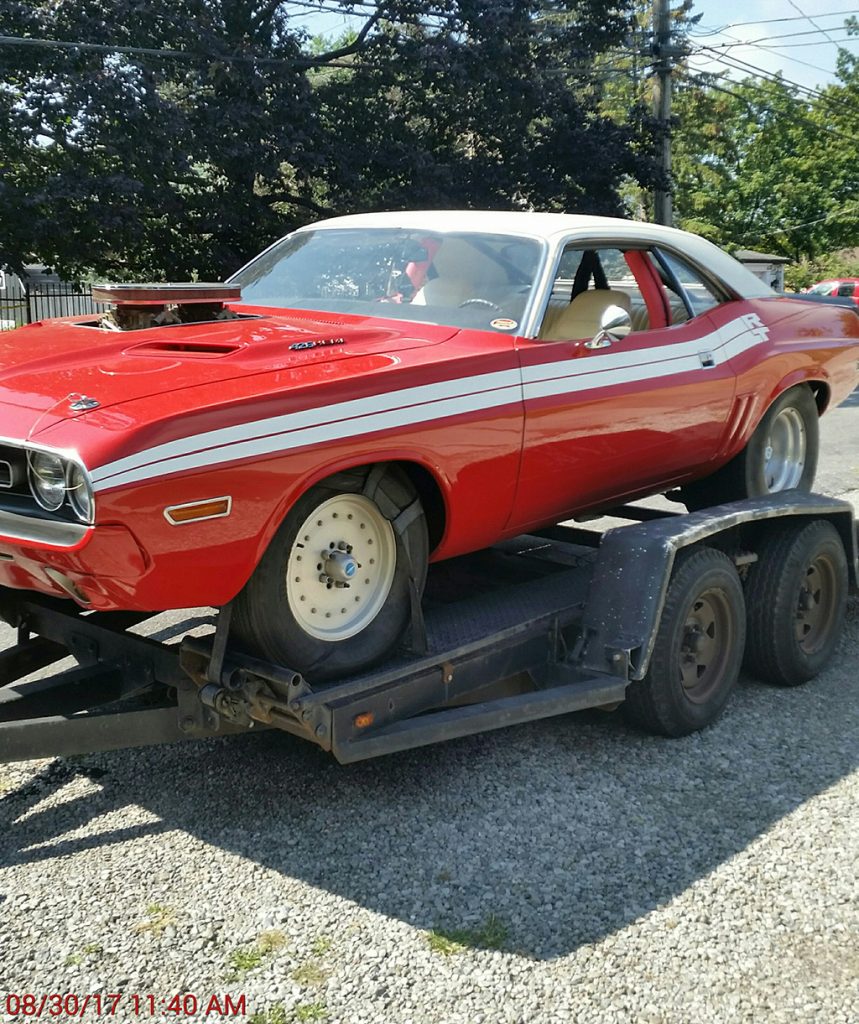 And I was one of the first contacted regarding it.

Stop for a moment and breathe that in.

I am being honored by the universe to play a small part in how this piece of history is preserved. All things are delicately interconnected. Indeed.

A MATTER OF PRESERVATION

The elephant in the room (pardon the obvious pun) is in selecting just how this all shakes out. The car needs to, nay, deserves to be preserved over the next forty years or so. And in that lies the rub. As a single Dad, my options are limited. I can’t simply liquidate things or harvest internal organs.. well, at least not my own… wait, that was out loud. However, I am in the position to assist in ensuring that the car winds up in the correct hands, and is preserved for future generations to enjoy. 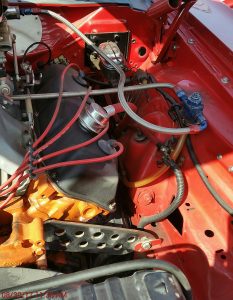 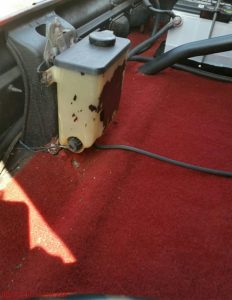 Does it need work? Sure… but it’s surprisingly close. The Lenco is gone, as is the original engine (read as “the one that matters,” anyway… the car began as a 383-powered R/T), but that’s all stuff that can be re-done. I’d take it back to the bright bumper, red spoiler and T/A scoop days (yes, versus the snorkel… just a preference thing on the visual side), but leave the trick traction compound applicator (fashioned from a windshield washer bottle) in the trunk. Trick little stuff is what makes it, kids. It’s not the sort of car I’d want to see pushed across an auction block, an then have it disappear into the ether; but rather enjoyed and preserved and driven. HARD. It needs to be placed into the hands of a steward, not a collector of things.

That said, I’m in a bit of a quandary. Do I liquidate things like a house, move my son and I in with my Dad and then tinker on it as I manage to scrape pennies? Or do I do the logical thing, and work to find the right buyer, and stick close to the car, hopefully acting as manager and caretaker, and see it through the end of my life, ensuring that it lives on to inspire some other five year old?

I believe that the cosmic string of events which have transpired all serve to answer the many questions with a resounding “YES.” I should remain attached to this car, and find a role that serves it best. After all, this car has literally been one of the very few constants in my life.

That said, it’s a matter of getting the right hands into the right pocketbook, and making the right moves. All things are delicately interconnected. Funny how that is.

Do you have a Woodward ‘dream’ story? Has there been a series of ‘delicately interconnected’ events or experiences that brought you and your car either together, or to a place where you may have made a friend? Hit me with it below in the comments.

How a Car Show Saved My Life