I’ll be honest, I was never much of a comic book fanatic. Like many, I knew the common superheroes like Superman, Batman, and Spiderman, but not much else. Characters like Deadpool and Iron Man were foreign to me. I enjoyed reading comics from time to time, but I wasn’t the type to know every character that DC and Marvel ever came up with. People like to make fun of the comic book geeks, but I was always impressed at how much passion and knowledge they had about every character. Little did I know that one day, I would be a part of a project that would certainly be on any comic book fan’s Bucket List. 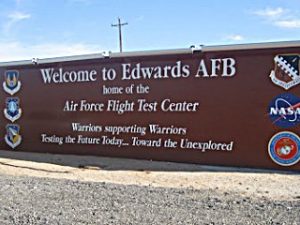 In May of 2007, the aerospace company I am employed with was contacted by Marvel and the U.S. Air Force to provide an aircraft to use as a backdrop during in-hangar filming shots.

Marvel wanted to have two of the most modern aircraft available, so they chose the F-22 Raptor and the RQ-4A Global Hawk. Edwards Air Force Base was the perfect location for Marvel to film because the weather is usually nice and sunny, there are a huge selection of modern aircraft to choose from, and there are thousands of willing active duty Air Force personnel to use as extras.

The name of the movie was Iron Man. Honestly, I had never heard of the character. The only Iron Man I knew was the one that Black Sabbath sang about in 1971.

SETTING UP THE SCENE 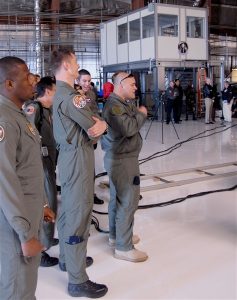 he morning of the film shoot was unusually cold. The filming was set to start at 7am. We met the Location Supervisor and discussed where the aircraft was to be placed inside the hangar. They were very particular about position of the aircraft, because they already had the overhead lighting in place and had mapped out all of the camera positions. It took a while to get the 116ft wide airplane into the exact position they wanted. We thought that once we had it parked and chocked, we would leave and let them film, but they requested that we remain with the aircraft in case the need arose to change it’s position. Sit and hang out on a movie set and watch people work? You didn’t have to tell us twice!

We were being very respectful of the film crew, so we stayed out of their way. It’s funny, they were so intimidated by the aircraft that they felt the same about us! I am a bit of a Logistics geek, so I was taking it all in. There was a lot of activity. I was watching all of the different departments on the film crew do their jobs, and it was fascinating. There is so much on the set that occurs outside of the limits of the camera lens.

Because the shot that they were planning was not on a sound stage, they had to set up a temporary lighting rig that was above the set, but not visible from any of the camera angles. They had a lighting rig that resembled a zeppelin that was approximately 20ft long by 4ft wide and suspended by helium balloons. The sole task of the lighting tech running that particular rig was to verify that all of the lights were operational and to ensure that the helium tanks were providing lift for the entire day.

The sound guys were placing microphones everywhere, and checking sound quality using the actor’s body doubles to simulate. There were assistants milling around everywhere.  There were active duty Air Force personnel that were slated to be extras standing next to us, awaiting instructions from the film crew.

The director, John Favreau, came on set about two hours later. He walked through the entire set and talked with the light and sound leads and then climbed into his chair. His Director’s chair was behind a 25” monitor that broadcasted the exact image that the main camera was filming. He was intent on ensuring that the image coming across his monitor was to his liking, so he was giving the light and sound guys  inputs so they could tweak their settings.

At nearly the same time, Robert Downey Jr. and Terrence Howard came on set. They both seemed interested in what was going on, and interacted with the crew. They both were looking at the aircraft from afar, nervous to go up and look at them closer.

Within minutes, the crews started squawking on the walkie-talkies, and everyone took their places. The Director’s Assistant got on the bullhorn to request quiet on the set. It was like clockwork. He then pulled out the clapperboard and started the scene. He called, “Roll Sound!”, and the older gentleman on the sound board started recording. The Assistant then motioned in a hand-signal to the camera crews to start filming. They were filming a major motion picture and I was 15 feet away from the action!

The scene that they were filming was the part in the movie where Tony Stark (Robert Downey Jr.) goes into the hangar where Colonel Rhodes (Terrence Howard) is giving a tour to a group of young pilots. Here is a clip of the scene, starting at the 0:41 mark.

We watched that scene being filmed at least 20 times. Each time they yelled cut, I thought that it was absolutely perfect, but they did it again and again. On each take, Robert Downey Jr. would make very subtle changes. He was always right on script, but would put emphasis on different words and use different facial expressions each time. He has a very natural, professional style. Terrence Howard was always on point, but he did his lines exactly the same way each time.

We broke for lunch, and if you’ve ever been on a movie set, I think you’ll agree. The food is outstanding. It would be hard to be on a diet and work in the film industry. There is always food on the set, and they had a “Craft Services Table” that had everything you could imagine. Chips, crackers, cookies, lunch meats, candy, and even gum. Free for the taking, just walk up and grab a plate.

After lunch, they got back to filming.  This time, they shot the same scene using a Steady Cam.  A Steady Cam is a gyro-stabilized camera that is mounted to a fixture that is secured to the cameraman’s waist.  This camera is used for moving shots where the scene follows the actor.  Watching the camera operator work the Steady Cam was a real treat.  They are good at what they do!

They wrapped up filming at about 3pm, and we started to get the aircraft ready to tow out.  A few minutes later, Terrence Howard, Robert Downey Jr., and John Favreau walked up and started checking out the jet. They were all very polite, and were in awe when we were telling them about the capabilities of the aircraft. Robert Downey Jr. asked the most questions, and he looked you right in the eye when he spoke and genuinely wanted to hear what you had to say. We had to do a lot of prodding, but we convinced them to autograph the nose landing gear door. Terrence Howard did something really cool, signing his name backwards in cursive, moving right to left.  Before they left, they asked us to do a group shot with them.  It was a fitting end to a truly fun day. 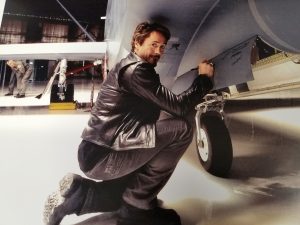 About six months later, the film came out. My wife Lynn, our son Kyle, and I went to the theater to see it on opening day. As the hangar scene played out in the theater, I recited the lines almost exactly as the actors did because I had watched the scene being shot so many times. But what really got me was how the scene LOOKED. The lighting was perfect, the sound was crystal clear, and the acting was spot-on. At that point, I was blown away at the professionalism and skill of the members of the Iron Man team.  They are truly pros at what they do, and I consider it an honor to have been a very small part of that massive project. 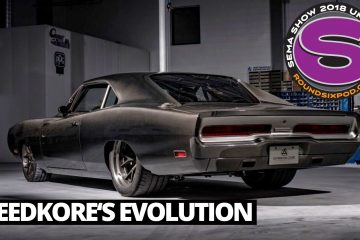 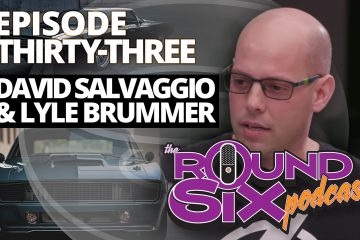