Learn How to Draw a Muscle Car

I thought I’d throw down a quick, step-by-step peek into the process I use to start a rendering. Today, we’re tackling the basics from the sketch through marker shading. This is a fast-moving tutorial for those looking to learn to create a rendering. That said, let’s get right to it, and bust out some paper, pencils (2B and 4B, as well as some non-photo blue, should you be so inclined) and the trusty Copics (cool and warm grays, as well as a blending marker), and have at it.

This is not a beginner-level tutorial. You’ll need to have a general understanding of perspective and form.

Let’s start by plotting the angle of the car, and general proportions and perspective with some loose guidelines. Keep things very loose and general at this stage. All we’re looking to do is get an idea of where the car is going to live on our paper. 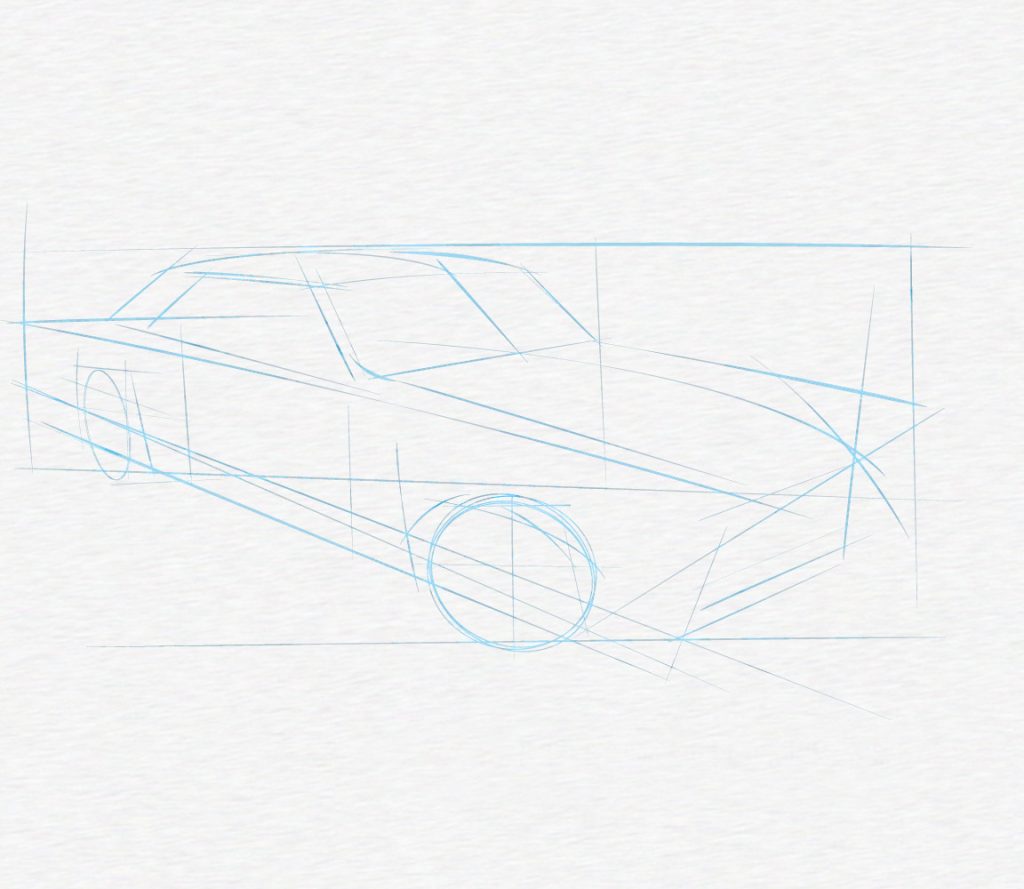 We’re not looking for perfection by any stretch; just looking to lay out the general shape.

Keep things very loose, and block-out the mass of the car, and hint at where the wheels will be, and give some general consideration to major elements such as door placement, windshield, roof height and so forth. Paying some close attention to scale and proportion at the beginning will pay off hugely in the later steps. Your initial sketch should be generic and vague, but hint at a car holding space on a plane.

Moving along on the tutorial, let’s clean up some of those sketchy guide lines, and start roughing-in the parts that will make this a Chevelle. We’re plotting and planning a place for all of the stuff that will need to show later on, so take your time, but keep it loose yet. 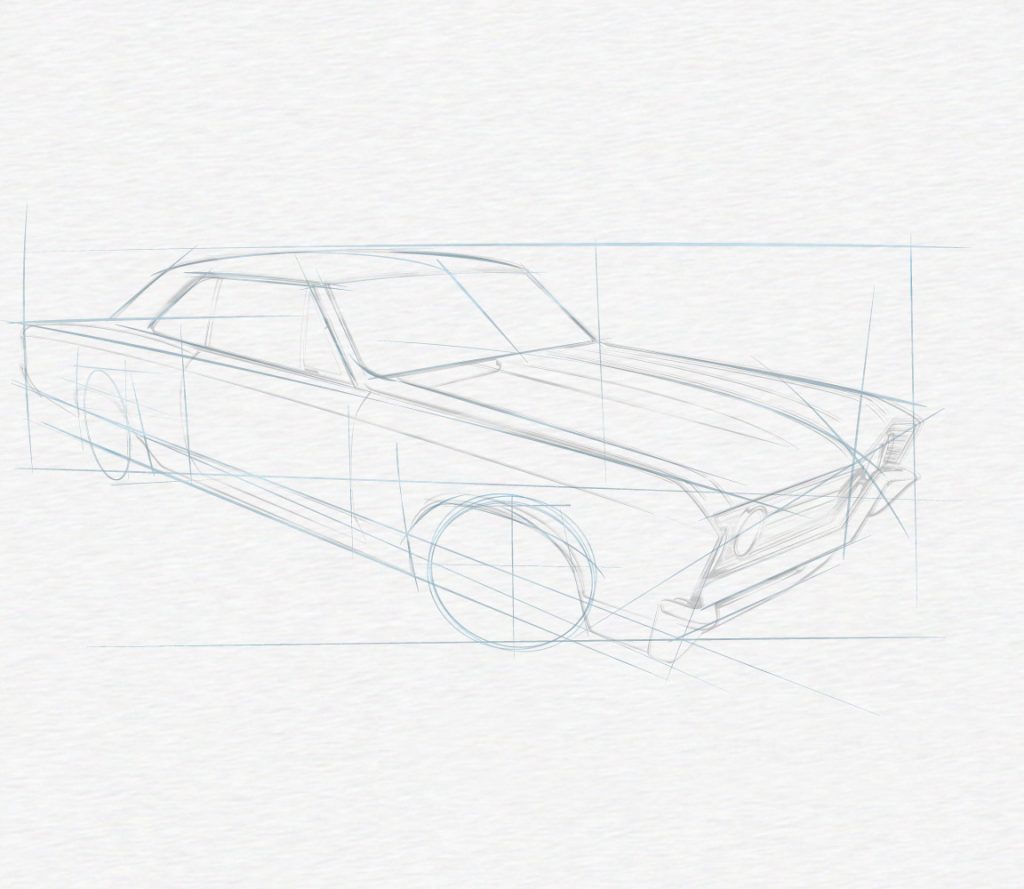 Onward with the tutorial!

At this stage, I like to add the wheels, and start tightening-up those lines I know will be staying. I pay some extra attention to the front wheel, and keep in mind the offset for the rear. Start by laying in an arc to figure-out just where the wheel face will sit in the rim, and set the stance. 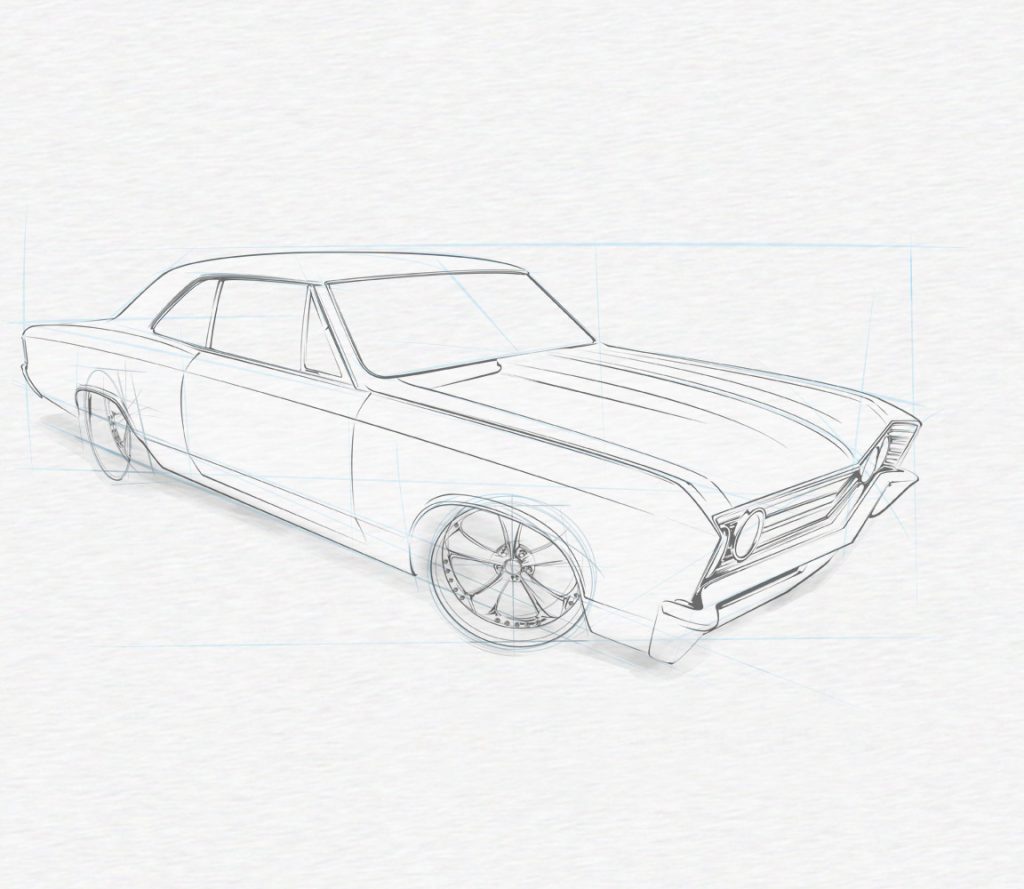 You can see in this pic that I’ve changed my mind a few times already. Remember: circular and ellipse templates are your friend. Invite them to play along. I like to lay in a few details as well, just to get an idea of where things like the lug nuts and any hardware might sit… And don’t forget the tire sidewall! This could drastically change the car’s ride height or the wheel’s proportion. It’s also fun at this stage to get your brain and hand working a little tighter, so spend some quality time on the wheel, for instance. Really start to figure out the space that it lives in.

Let’s continue our theme of cleaning-up those stray lines, and get on darkening-up the shaded areas, lightening those areas that will get a blast of light, and, sadly, this pic doesn’t show it too well, but I’ve started loosely adding some rally stripes, per the client’s request. Again, we’re working a bit tighter, and slowly building the tones. Easier to add a little at a time, than to start over when it’s all blotchy and too dark. Still working very lightly with the Copics (neutral and toner grays at this stage). 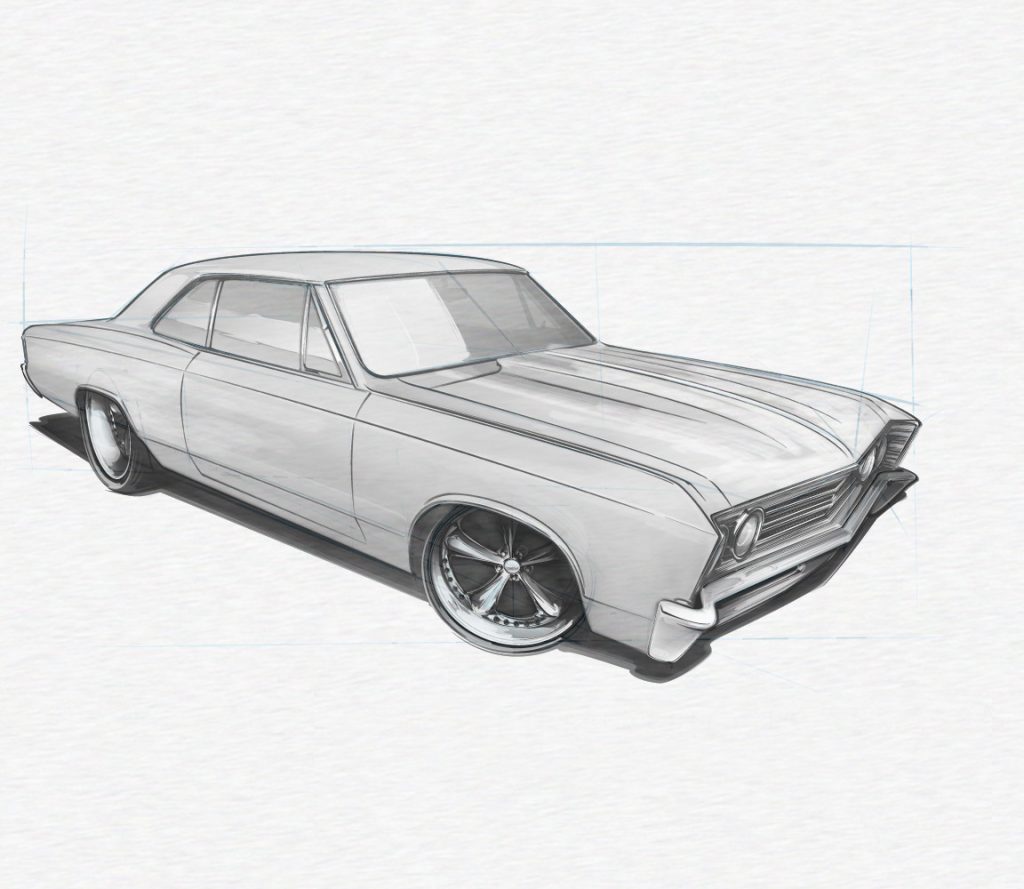 Forms are the function

Moving along in the tutorial, let’s get those stripes blocked-in (careful… careful!), and continue working the entire car. We’ll darken up some lines, and detail some reflections on the bumper and wheels, as well as blending a bit on the shading. It doesn’t have to be perfect at this stage, just needs to represent a light source, some reflected light from the ground, and show that the body panels have a slight curve. The tricks here include building the shading slowly in layers, and trying to imagine where the brightest areas of light may be hitting the car’s body. We’ll want to leave those lighter areas alone, and work a little bit more in the darker areas. For example, where the bumper has a small overhang, or just to the sides of that cowl induction hood. 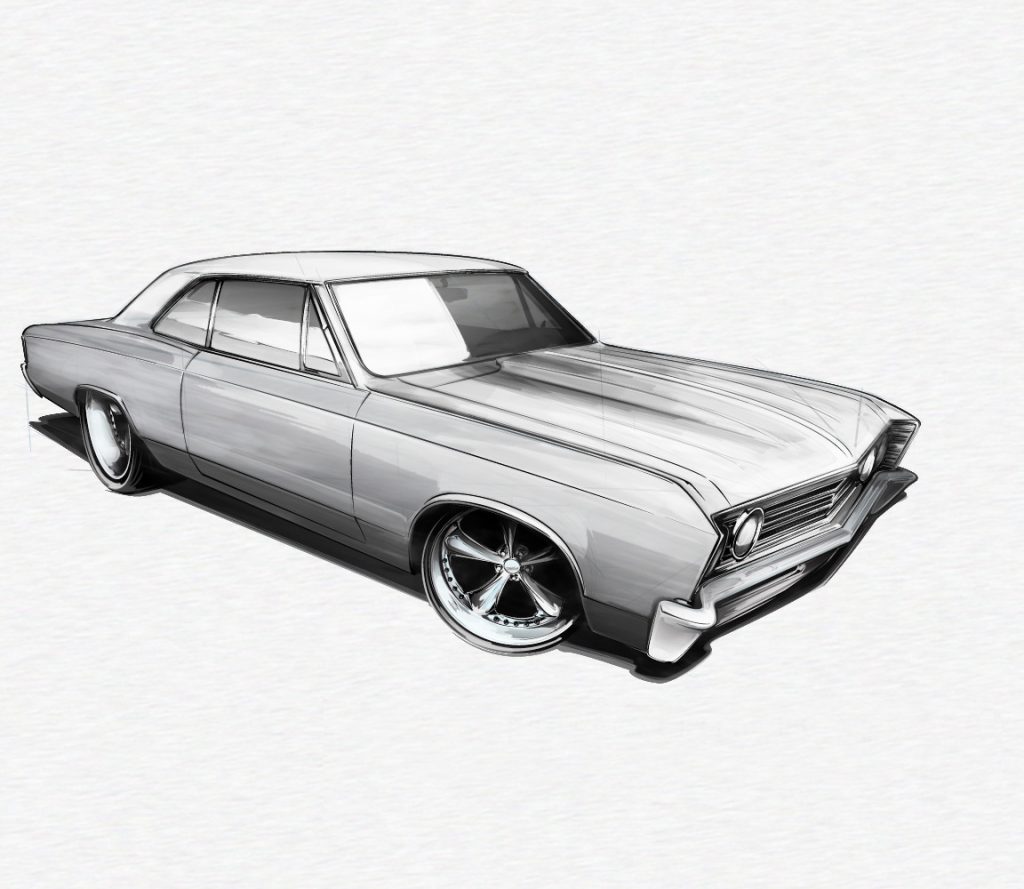 Cleanliness is next to rod-liness

At this stage, we’re simply tightening-up the shading, and continuing to clean up any stray lines or smudges. We’re starting to go over and darken-up some lines. Bring that right front fender closer to the viewer, and making those quarters and roof sink back into space a bit. I’m also paying closer attention to the shadows cast on the wheels as they tuck into the fenders. This is where you can make the sketch a little more believable by creating the illusion of parts being in shadow, with light bouncing around a bit. Again, just have fun with it! 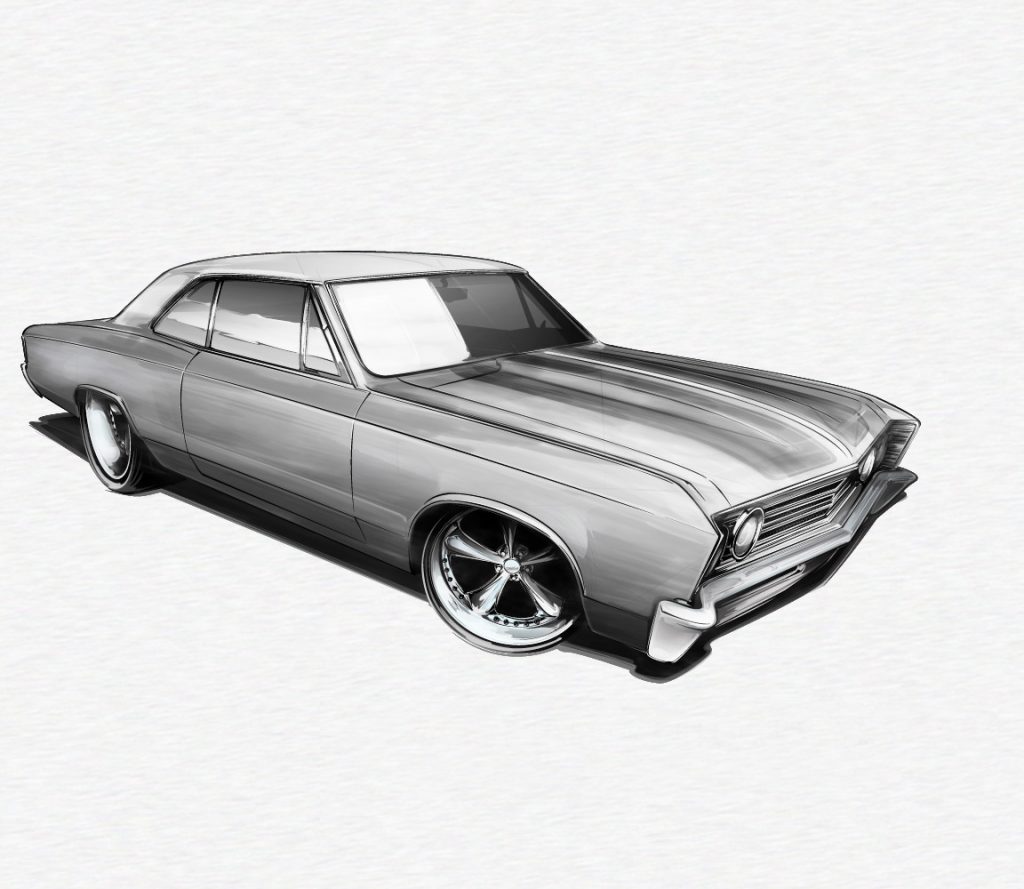 Close to finishing-up the ‘traditional’ part of the big how-to. Let’s tighten-up those final details, lines and shading, blending in the tones, and adding a hint of color. We’ll drop some orange in those stripes (per the client), and drop just a hint of blue and green into the glass and chrome. Normally, I’d have scanned this in a few steps back, but for our purposes today, this way just works. Hope you enjoyed this look into the process… Working on some full-on, step-by-step tutorials as time allows, and those will hit soon, in a handy, easy-to reference guide. Keep at it, and above all, have fun, and work to observe lighting, shadows, and reflections, and just play with them in your work. 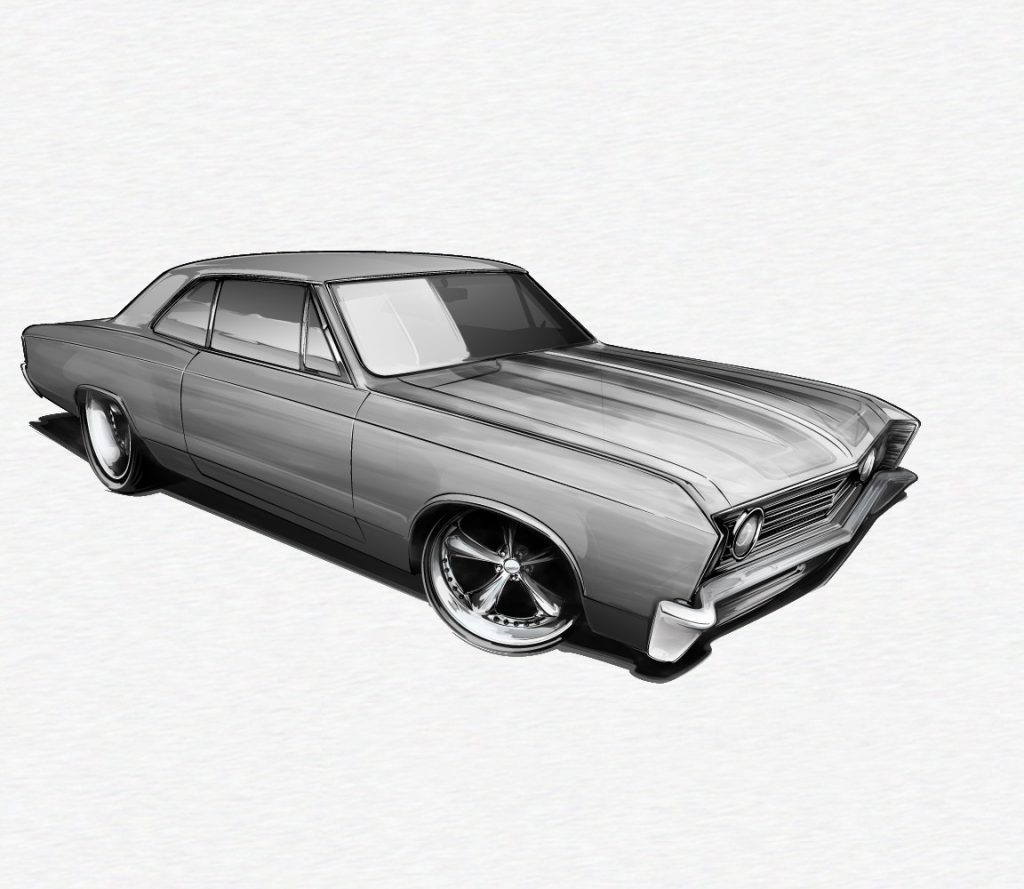 It’s not all shades of gray

Next, let’s start adding some color. We’ll do this sparingly, with a little contrasting orange on the stripe border. Then we can bring that color ever-so-slightly into the windows and some assorted small places, just to keep things visually consistent. 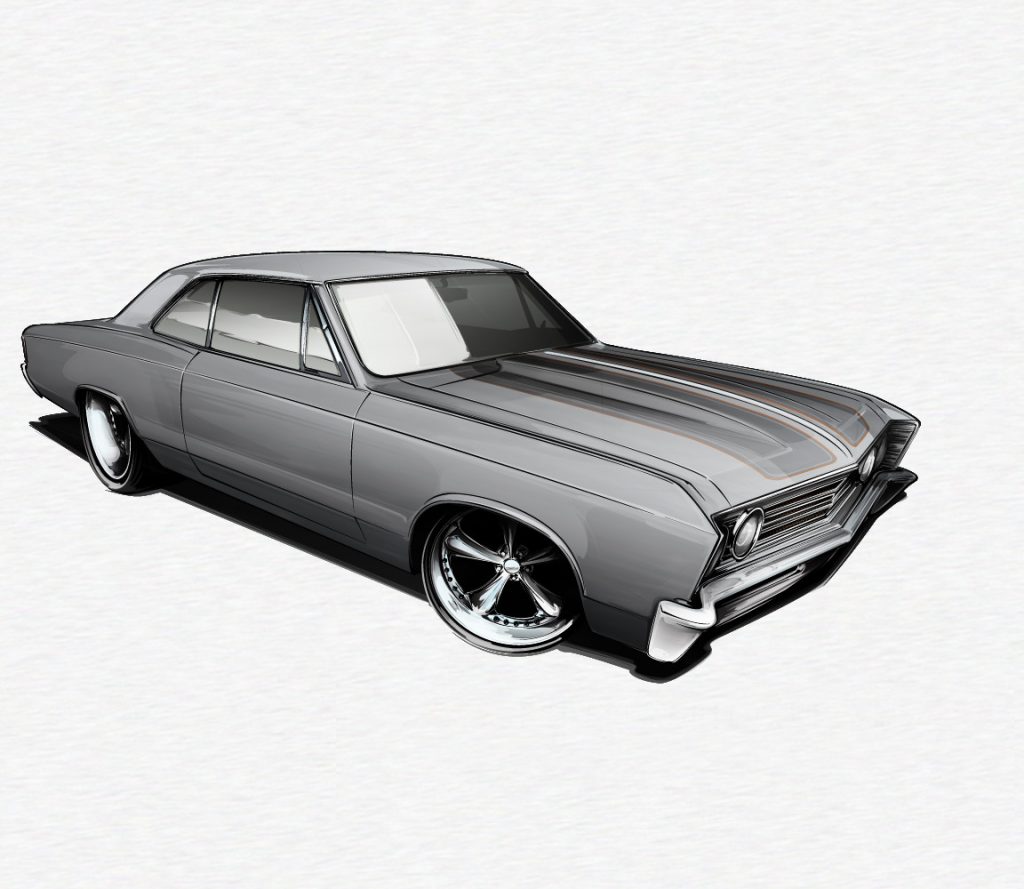 …and we’ll bring in some greens and blues, to contrast the warm orange, and give some ‘glassy’ feel to the windows. Bring a touch of blue into the chrome pieces, just to make the metal there look cool, temperature-wise, and reinforce that the body color, even though it’s gray, is warmer. Bring in a white Prismacolor pencil, and add a few highlights and spots where the lighting might be a bit stronger (‘hot spots’)… This brings a little more reality to what is, essentially a slightly cartooned drawing (in proportion, anyway). Above all, just keep having fun, and don’t over-do it. Less is very much more at this point. 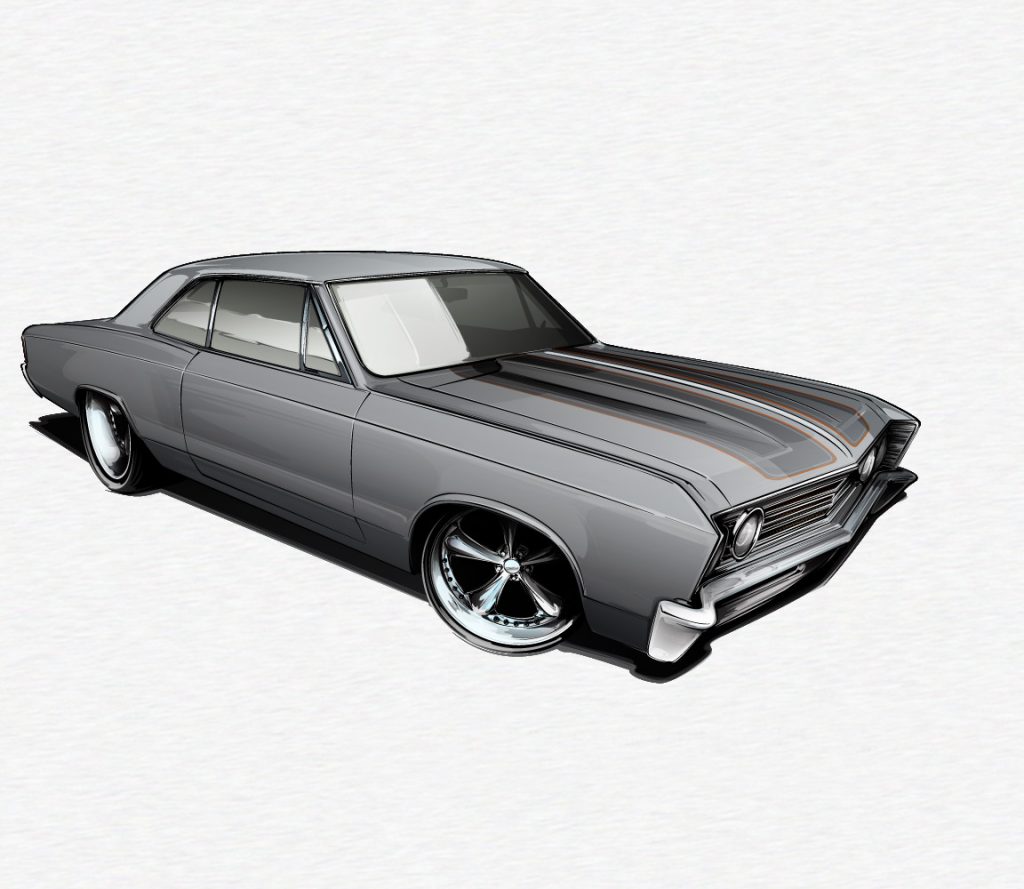 Next time, we’ll get into the background, as well as some digital techniques to finish the rendering… Winding-up with something that looks eerily similar to this: 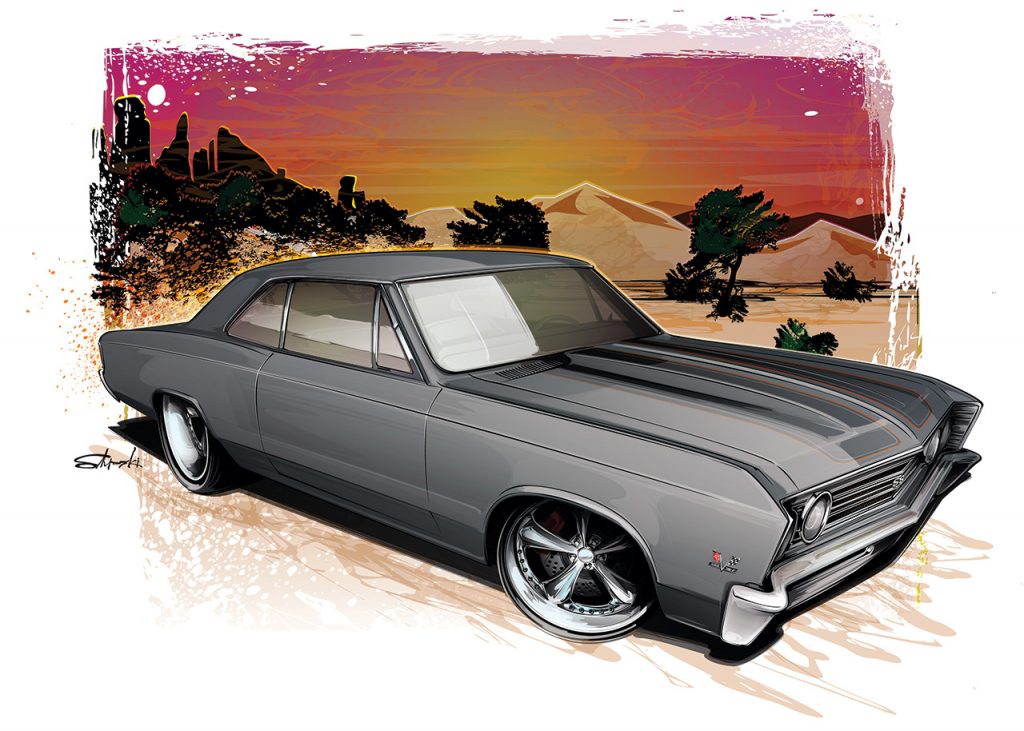 Thanks, as always, for looking in! I hope you find these steps and hints useful, and will apply them to your work. Any questions, comments, whatever always welcome! Hope you have fun, and keep at it.

Coming Soon: Tom Fritz on The Round Six Podcast

El Mirage: Stacie Steps it Up

Learn How to Draw a Muscle Car