History Rewritten in the Virtual Grime

History always begs to be rewritten. Being a physics aficionado, the theory of multiple dimensions holds a special place in my brain. Couple that with a love for all things science fiction, and my synapses light up with boundless ideas and tales of the bizarre.

This in mind, I had been imagining for some time a ‘what-if’ scenario. What may have happened if AC Cars had not lost their engine supplier? Imagine that NASCAR wasn’t a primary thought on Ford’s mind in the early 1960’s. Season that with a punch of willingness to make the Thunderbird more of a world-class performer. We can see where this is headed. The ultimate alternate-dimension barn find.

Run Hard and Put Away Wet

That said, behold the final iteration of the winningest Thunderbird on the opposite side of the space-time bubble. Wearing the shorter, half-width windscreen, we’re obviously looking at a pre-GT car. This monster is complete, right down to the dirt and grime from it’s final race. While later cars would be fitted with the mighty big blocks, this small block-powered ‘Bird left many a European car behind, engulfed in the shriek of its high-winding exhaust note and dust.

While these cars lend themselves extremely well to the custom treatment, I’ve always pictured one as a track car. By drawing inspiration from the race cars of the day, I couldn’t help but plot a course for this T-Bird. Of course, this involved some down-home innovation. The widened fenders, flip-nose, headlamp covers and full-length hood scoop and more… Setting it up as a well-preserved chunk of history brought out into the sunlight following a long roost.  That said, consider this my proposal for a melding of ‘street cruisers’ and ‘pro-touring.’

The Dream Becomes a Real Project

Could what we see here be the culmination of that Twilight Zone fantasy?

The Twilight Zone Thunderbird, or TZ ‘Bird for short was discovered in a time warp barn, just as it was when it completed it’s last race. Still covered with the road grime and rubber that comes from endurance racing, there’s oil from the dozens of European cars it drafted and passed still clings to the front bumper. The low windscreen bears the scratches and pits from Lemans, Sebring and Daytona. Worn seat belts lay curled in the seat where many a winning driver worked his magic against seemingly formidable competition, and still came out on top. It’s a time capsule from a time that never was. 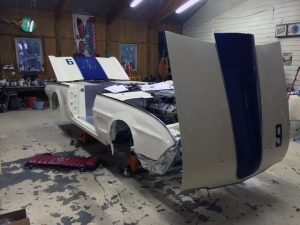 This ’Bird, which started life as a mundane two door coupe underwent considerable changes to become competitive. It shed its roof and the related glass. The chassis was stiffened to handle the strain of high speed cornering with the single roll bar becoming part of the structure. The factory suspension was replaced with adjustable tubular A-arms up front and a four link rear with coil over shocks all around. The fenders were widened, hood modified to become more slippery and the interior was fabricated from aluminum.

Under the hood many a motor may have resided, but the winningest power plant was the light weight small block with its screaming high RPM whine. Exiting through the open side pipes to the thrill of the many fans of this sleek relic from the days of REAL racing.

Now that we have indulged our imagination to bring this ‘Bird in to the light of day, it’s only fitting to make it come to life for REAL!

Over the course of the next few months, construction began on a tribute to the car we have imagined above.

It was constructed using today’s technology and parts so it can be not just a show car, but actually compete in autocross events and see some track time as well. A stack-injected aluminum 427 cu. in. small block and a modern 6 speed trans (set back to enhance weight distribution), and a 9-inch Ford rear end with all the best upgrades. Suspension consists of fully adjustable front a-arms and splined sway bar along with a triangulated 4 link in the rear. Adjustable coil over shocks on all 4 corners. 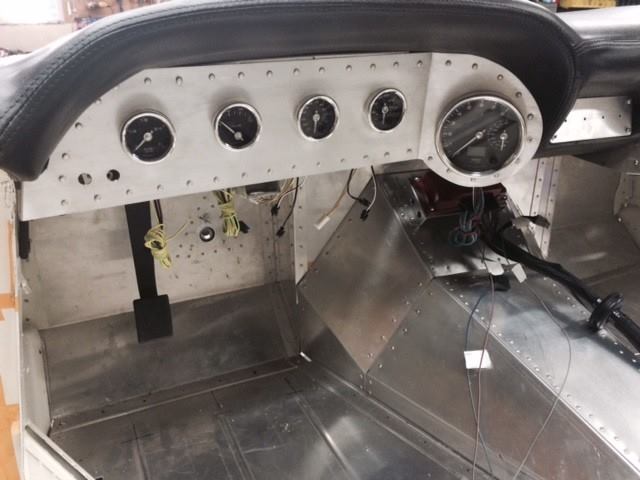 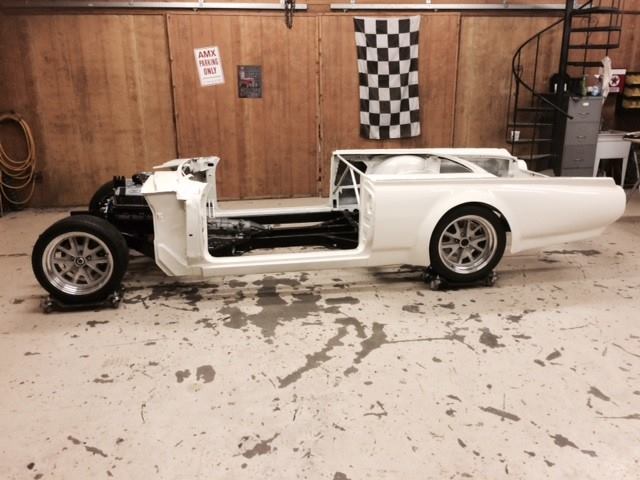 The factory unibody chassis was strengthened using a tubular structure inside the car to make that suspension work properly. All of this is covered by a custom riveted aluminum interior. To retain the vintage racing look, the original Thunderbird drivers seat was reused along with period correct seat belts.

The exterior is where it shows off that vintage vibe. Hallibrand-style wheels, fender flares and that very cool side exhaust. And what could be more mid 60’s race car than the single roll bar, raised hood blister, side louvers and the short windscreen? Combine all of that with period correct graphics and a killer low stance and you truly do have a time capsule come to life.

The really cool part about this car is that it will be no trailer queen. It will be street legal and have interchangeable windshields. We can drive the wheels off of it on a regular basis, not just at the track or autocross. Sure it will see some shows too, but the whole idea here is to have FUN! 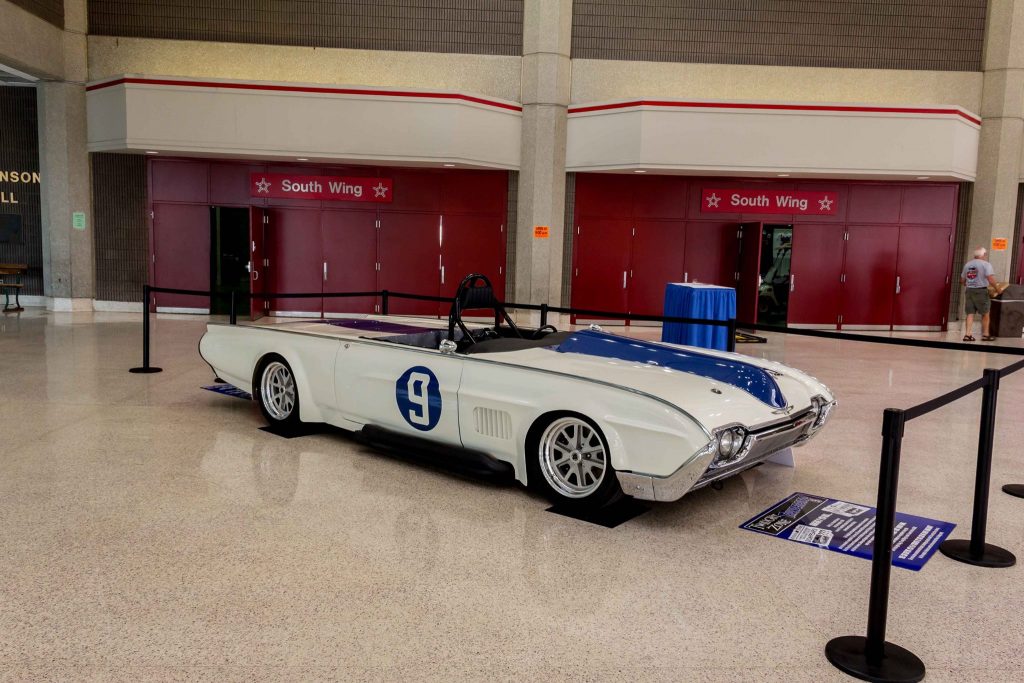 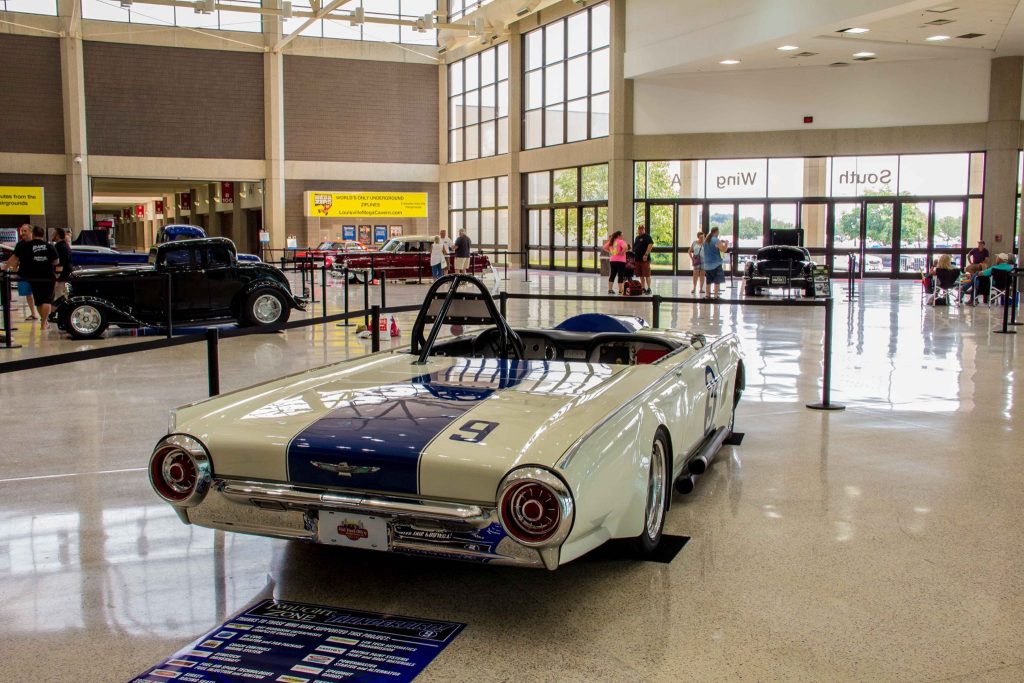 After its debut at the 2016 NSRA Street Rod Nationals in Louisville, it’s been out there, doing its thing. In a dimension unencumbered by time or self-imposed rules. It’s free to race along the track of imagination. 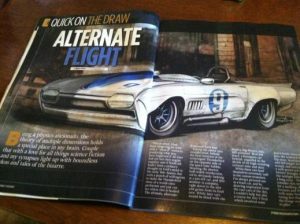 (you can find this artwork, and the accompanying article in the May 2013 issue of Street Rodder Magazine)

The Road Trip That Took 30 Years To Overcome