As happens from time to time, I was getting all four of my hairs cut. The owner of the barber shop shared with me that she and her husband were watching the latest Transformers movie. She wanted to ask me a question. She said it looked like me in some of the extras footage and told her husband she thought it was. I kinda laughed a little and told her that yes it was me.

Transformers Age Of Extinction Behind The Scenes Part 2

I was a little embarrassed and proud (it was pretty cool) when I told her how it all went down.  When I told Brian about the conversation I had, he told me I should tell that whole story, so here goes…

A secret so big, it can’t be mentioned on the phone. 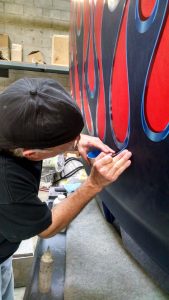 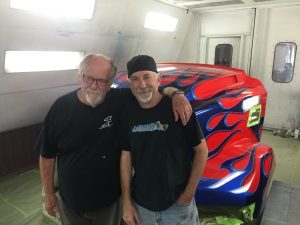 I get a phone call from Mickey Larson, a friend of mine who builds hot rods and custom big rigs and says he needs my help on a movie project but I need to come to the shop because he can’t discuss it on the phone. OK, I guess I need to make a trip to Pomona.

A couple hours later my friend and mentor Dennis Ricklefs calls and asked if I talked to Mickey. I said yes and asked what was so secretive and he said the same thing, come down to the shop. The next morning I drive to Mickey’s shop to meet Dennis and see what the big deal is. I walk into the shop and see a bunch of guys working on a truck that’s torn to pieces, but I do notice some pretty cool parts laying around. I ask where Dennis and Mickey are and get promptly pointed in the direction of the paint booth.

Now this is where I realize I’m definitely NOT a kid (even though I still refuse to grow up!) as they start showing me illustrations of a truck. A goofy, gaudy looking truck. I say this because I grew up around cool trucks and can proudly say my Dad was one of the original guys in the early 1960’s fixing up big rigs in Southern California. I look at the guys and go “Ok, what’s with the weird truck?” After a bit of a stare down, Mickey says “It’s Optimus Prime.”

What the hell is an “Optimus Prime?!”

Of course my answer back was “What’s an Optimus Prime?” This is where the age thing come into play because I honestly have no idea what he’s talking about. I then get the whole rundown on the Transformers movie franchise and how cool this was going to be. In a panic I look at Dennis and he’s as lost as I am, so now I know I’m golden. 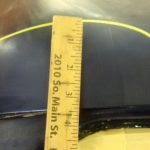 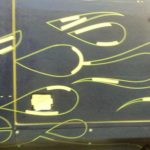 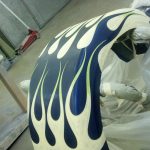 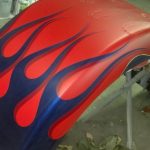 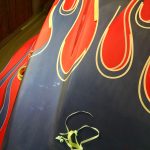 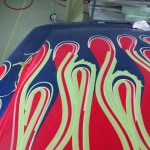 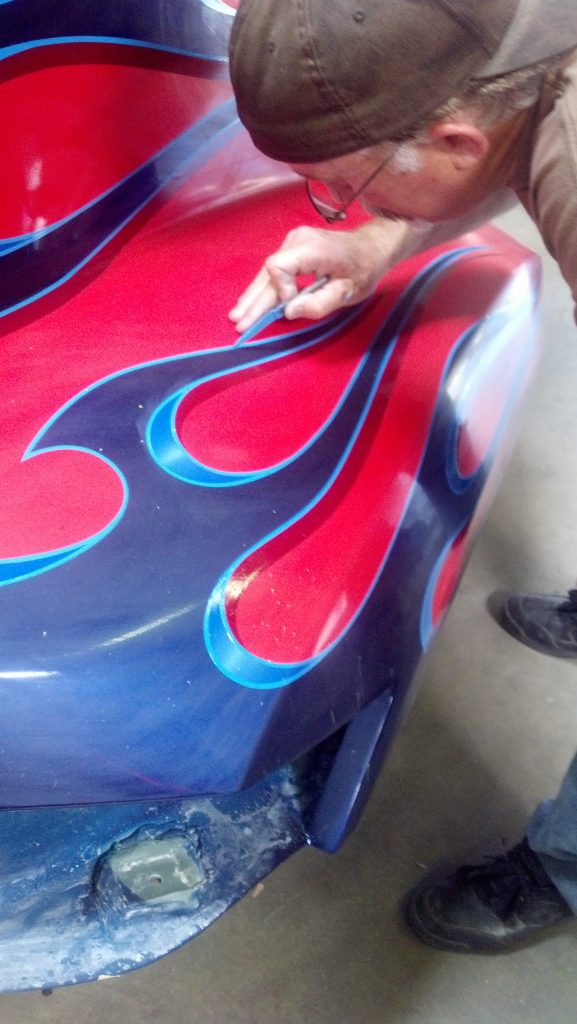 The first thing the studios ask from Dennis and myself is a “test” panel to see how the flames will look. Dennis laid the flames out, then I helped with the airbrushed highlights and pinstriping. After the go ahead from the studios, we got busy on the actual truck. Dennis goes to the local printer and makes huge {to scale) photo copies of the illustration. From there we make a pattern for the flames and we get busy doing our thing.

Now I’ve been fortunate enough to have tag teamed on many projects with Dennis since the early 90’s and am truly honored to call him my friend. Part of our “agreement” (actually he TOLD me the rules!) is anything higher than him standing on the concrete, is on me. So now the milk crates, ladders and scaffold comes out and yours truly is getting altitude sickness. 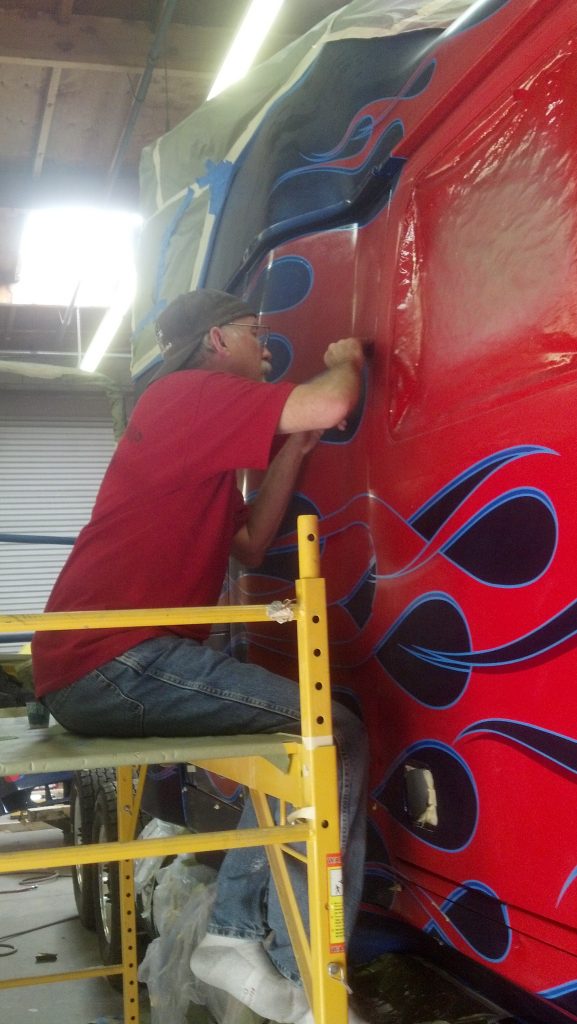 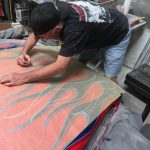 A picture is worth a thousand pardons.

Now before this whole thing started, we were threatened with death (or at least a fine) if the word or ANY pictures came out of the truck before the movie debut, but listening to rules isn’t always on my list. I’m old and my memory isn’t what it used to be. I took lots of pictures of laying out flames because I knew we were doing a second “Prime” and I’m a stickler for details. I only got yelled at a few times so all was good. The first truck was a serious, major thrash to get done because filming was starting soon.

Dennis and I knew we were going to need help because we were running out of time, so we called fellow Disney Cars Land alumni Jeff Styles for a day to help us finish it up. We finished it up so the guys could get it cleared and put back together.  After all the late nights working in the cold, I ended up fighting pneumonia. I would be down for a week and a half. The payoff of working on famous vehicles I guess.

Measure twice, get yelled at three times as much.

Two weeks later (I was still not feeling well) and we’re back on the second truck. With the same rules of Brad not being allowed at “ground level.” 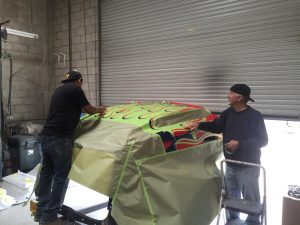 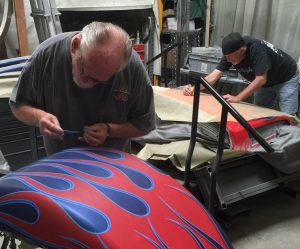 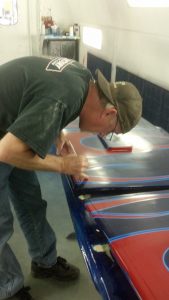 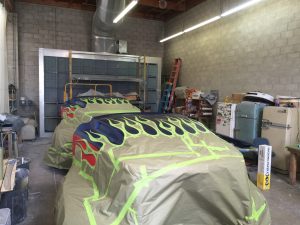 This time around we weren’t on kill mode. They were busy filming with the first truck. The first was the stunt truck and this was the “show” vehicle for the movie close ups as it had a crazy trick interior. Since it wasn’t a full court press, we were able to get it done with just the two of us. All of the previous pictures I took with my yardstick showing measurements were being used religiously to make sure both trucks look as exact as possible.

The one guy who was constantly getting mad at my picture taking (I’d just yell back and tell him to leave) now understood why I did what I did. Good deal. Second truck finally gets finished up, but I’m told that I still have work to do. 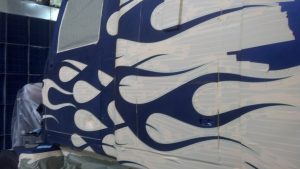 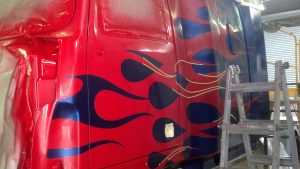 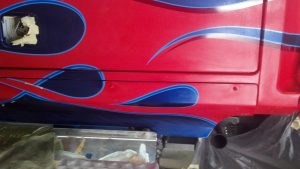 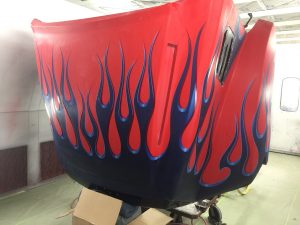 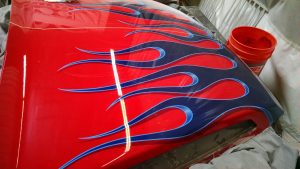 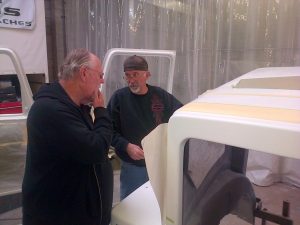 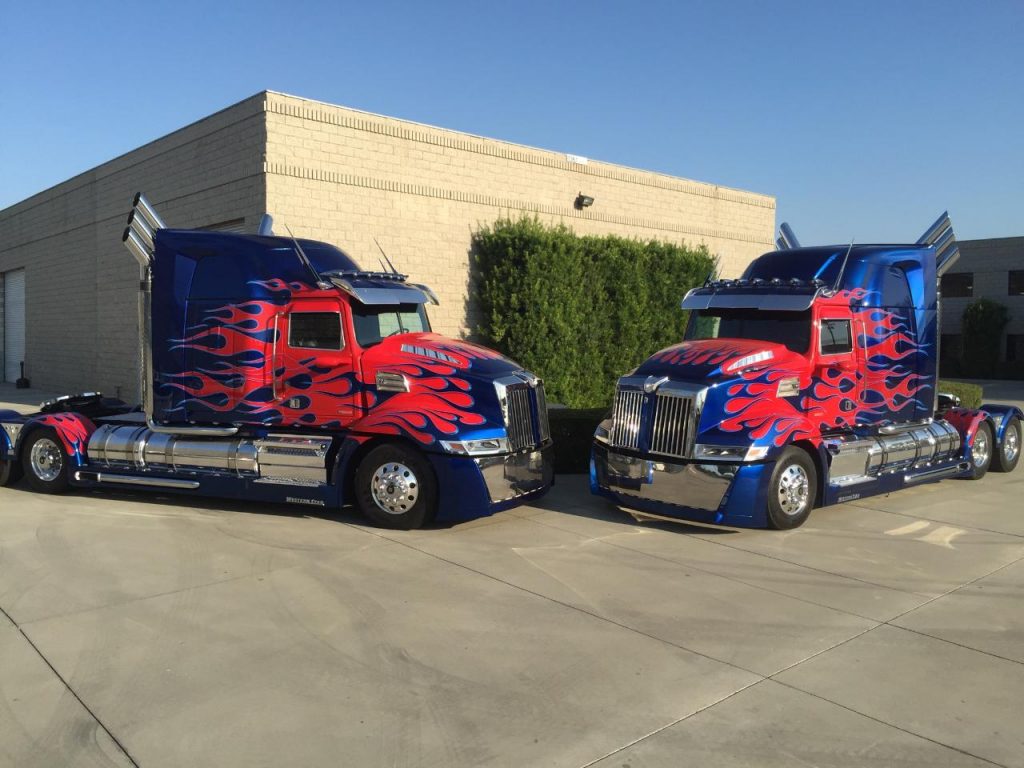 Primes and props and plastic pieces, oh my!

Now this next thing seemed a little strange at the beginning but was actually pretty cool once everything was done. I get handed these small plastic automotive looking shapes that were first painted blue by the guys. I was told to paint a small flame complete with the airbrushed bevels and drop shadow. Once they were pinstriped and cleared, they were boxed up and shipped to the different toy manufacturers. They would be used as the “prop” for making the paint look like the truck for the different toys being made.

If a toy was made to replicate Optimus Prime, they used those paint models to make it match. That was a pretty cool thing to be involved in too! Big thanks to Mickey and Dennis for letting me be involved in a pretty crazy project. Even one that Ben the art director told me to quit looking at it as a funky truck, but instead as a “really cool toy!”

Couldn’t have said it better myself…