The grim reaper is a greedy bastard, and he appears to have a taste for Giants.

Three things Vance always had for you were big smiles, bad jokes and great stories. He was as stubborn as a two-assed mule, but he was always interested in what you had to say… Unless you happen to mention only consuming cigarettes, soda and potato chips wasn’t a good idea for someone in their eightieth decade on this planet. Then, not so much!

Vance was always chuckling and seemed to be in his happy place BS-ing, bench-racing and building in his shop that’s in back of his house. So, feeling this to be the appropriate venue, Vance’s good friends and artists (I’m also lucky to count them as friends) Jeff Williams, Brett Mason and Ben Cizowski brought into Vance’s shop a plain black box and made it “Vance-worthy.” 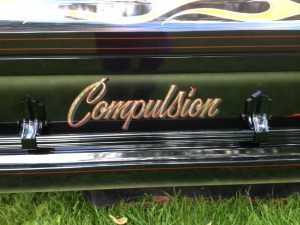 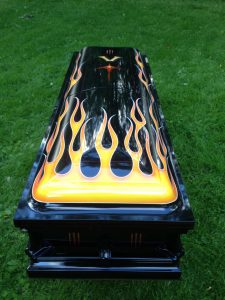 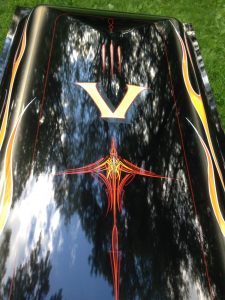 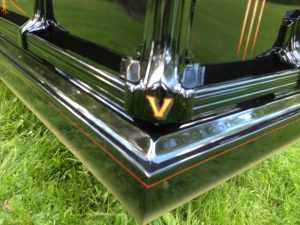 Along with some pretty cool hot rods being built and painted in that space, Vance’s last ride was striped and lettered with the only name that’s ever been on his race cars, “Compulsion”.

Vance was a Giant. Oh, I don’t mean physically (although he was well above six foot tall), I mean he lived life large. He did more in his lifetime than a dozen men his age. He truly loved his wife (who loved him until she died) and three kids (Dawn, Kim and Lance), he built his own hot rods, he wrenched on race teams, he drag raced.

He raced on the Bonneville salt flats and he rubbed elbows with some of the biggest names in motorsports, including NASCAR. He was the kind of guy that was tickled  about the article about him in Hemmings, but he always seemed to move the conversation to other people’s accomplishments. 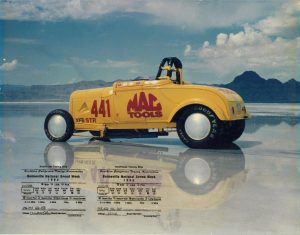 And he had mountains of photo albums…..with stories for each picture.
He loved to bring me back to each time in his life, when

you could tell from the pictures, he was having the time of his.

I really enjoyed being transported back to eras that I had only heard of and dreamed of as a car guy!

That is, until I started to hear stories repeated. Then it was,”Oh my gosh Vance, look what time it is, I gotta go…”.

My dad passed away 15 years ago this year. I’ve never really written about him because his passing still angers me and chokes me up. Hell, I can’t even do a portrait of him yet. What saddens me the most, apart from the obvious, is that when a person dies, all of their experiences and knowledge is…

My dad was one of the smartest guys I’ve ever met. I was very lucky to get the chance to spend a great deal of time with him where he could teach me most of the skills I still employ today. But it was just a fraction of what he knew and his experiences. He started his own company and designed and built his own equipment because he was the first in his field. And even though I spent a lot of time with him, I was a kid. I had kid things I wanted to do that were way more important than spending time listening to my dad. Too many times I said, “Gee dad, look at the time, I gotta go….”

(My throat is getting sore typing this)

My dad was also one of the Giants. He was a down to earth kinda guy who knew electronics, hydraulics, pneumatics, engineering, mechanics and apparently how reproduction works……He was a big guy, about six foot and a solid 250 lbs. With hands like canned hams, ever present cigar and whiskers akin to a wire brush, he looked like he’d be more at home falling trees in the Northwest or hauling up anchor chains in the Bering sea. But I remember how easy he was. He’d use those big mitts to pat us on the back when we did well, and gently encourage us when we needed it.  He could’ve kicked my ass back to a fetus, but that’s not the way he was. Oh, he got mad at the seven of us kids (Six boys, one girl)… But we were always more afraid of him being disappointed in us than in him laying a hand on us.
That is what kept us miscreants in line.

Why am I telling you about my dad and Vance? Because all of our giants are dying and I’m afraid we’re losing so much knowledge and history by not learning as much as we can from them. I’m also afraid there aren’t many giants coming up behind to replace them. In this throw-away world, the number of “replacement” giants more resemble a row of hen’s teeth than sharks teeth. Who, today, would you consider a giant or titan? Men of means? And, by that, I don’t mean money, I mean abilities, know how, skills, experiences……people that know how things work and not just how to work buttons. Are there any pioneers, any more Smokey Yunicks, coming down the pike?

So I say screw the Double Nippled Pygmy Hippopotamus and the Yellow-Eyed Blue-holed Penguin, we need to put giants on the endangered species list!
Go call your dad or your Vance or any of your other heroes and listen to their stories. Better yet, record their stories for posterity and the rest of the world before you can’t, because

I’d give anything to hear my dad’s voice once more, even if it was just “Fe, Fi, Fo Fum…”

Drawing Cars: Finding That It's All in the Details 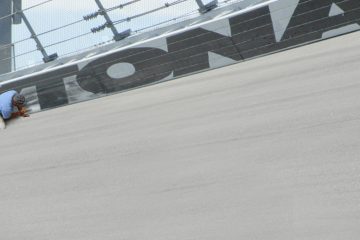