Drawing Cars: Finding That It’s All in the Details

An obsessive-complusive personality can be an advantage

Salvador Dali once observed that “the true painter must be able patiently to copy a pear while surrounded by rapine and upheaval.” There’s a guy who knew how to put a thought on paper. And you know, it’s not just the turmoil and distractions of daily life that can throw off some artistic concentration, to me, anyway, there’s the constant temptation to get radical with every inch of the paper when drawing, and skim over some little details that could truly test my patience and skill. 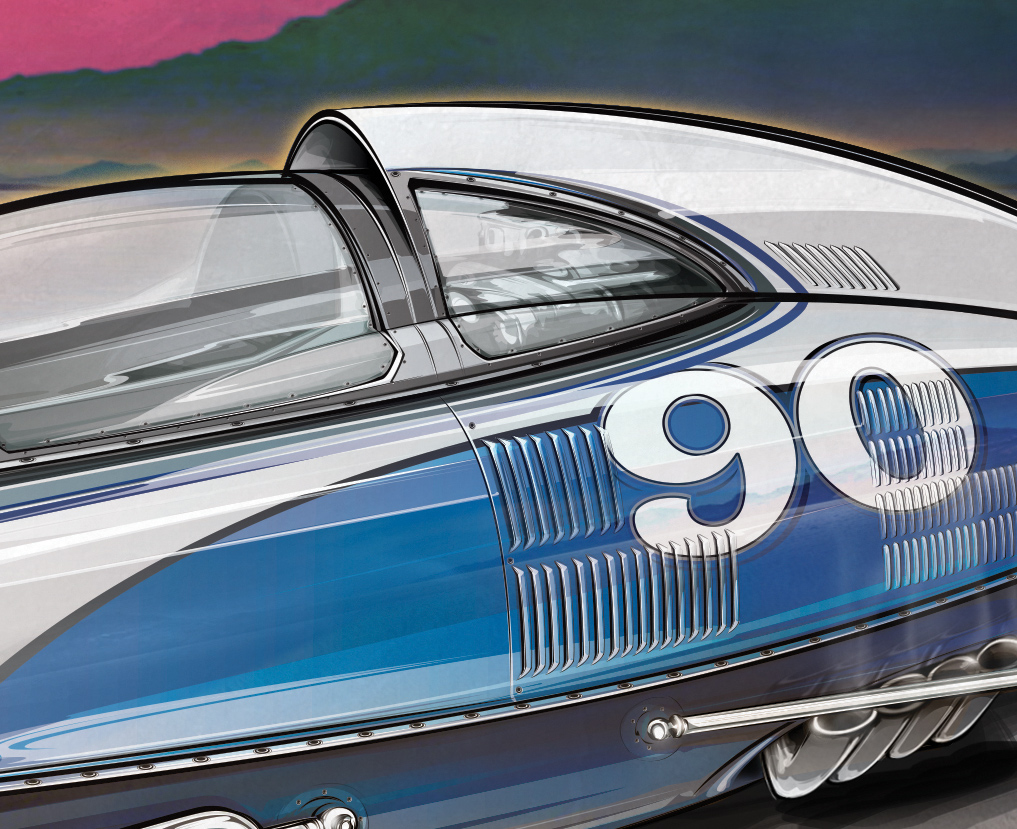 Occasionally, the pens take on a life of their own, and the ink and pixels are flowing at an alarming rate, and the piece is getting a smooth, loose look, and all is well… but then something happens.

Not because I’m tired, or unhappy with how things are going or anything like that… I just get drawn into some little detail. There might be a reflection that urges me on, or some tiny curve or indent or character line on whatever I’m drawing that makes me take an almost unholy interest.

…and this is where a drawing goes haywire 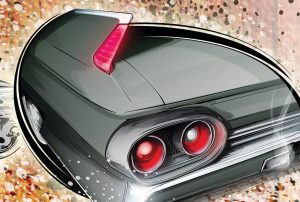 You see, in my line of work, time is the enemy. There’s never enough of it. You can only create so many pictures in so much time, and time keeps slipping away from you. Oh, sure… you go at the day with the greatest intentions, but by noon, the day’s half gone (or even less on some more marathon days), and you’re three hours deep in rendering headlamps or hair.

Suddenly, the sun’s gone down, the DVD player’s been looping the menu for King Kong’s special features for three hours, the coffee is room temperature, the significant other is mad, the kid is sound asleep, the dog is dancing around with crossed legs and floating teeth, and you’re… Well, you’re adding digits to some gauge panel on an interior rendering.

A detail that almost no one will ever even see… But, by golly, they need to be there!

What drives me to do this, day in and day out? 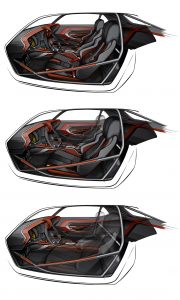 Beats the shit out of me. I enjoy hiding the tiniest of details in a piece, and enjoy the heck out of it when anyone finds them or comments on it. But, it’s not about the recognition. For a while, I believed that it was. “Wow, Brian, you’re shouting ‘PLEASE LOVE ME!’ by drawing lug nuts and lamp filaments, you douche.” That wasn’t it, though. It was something else. Something, well… More personal.

I was deriving a HUGE amount of satisfaction for the challenge of it all. It became a game with me. How far could I take a piece? What miniscule, insignificant detail could I make look cool, without attracting too much attention to it… Yet, if it went missing, would leave everything out of balance and unfinished-looking?

Again, on the flip-side, it’s this obsessive attention to detail that costs the extra hours… but, in the light of perceived value, I’m throwing in some hefty bonus features, and that, in some warped way, makes the cold meals and other, assorted lost time well worth it.

I mean, it’s fun to see a cool picture, but if you dig a bit deeper, does it still hold up, or is it a lot of smoke and mirrors? To me, it’s far more entertaining to see the little stuff that makes it all look, in the case of cars, anyway, put together.

Not to simply look at a subject that I’d be drawing, or even to study the nuances, angles, curves and so-on… but to pay attention to where it existed in nature (or within its plane of view), and, most importantly, how it interacted with the forms and objects around it. Precisely how it played off of the things around it. That little nugget of know-how permanently warped my sense of drawing, painting, artistic creation… even how I listened to music. It was the equivalent of telling an OCD-afflicted person to watch out for cracks in the sidewalk when walking on the wrong side of the street. I latched onto the idea, and never have been able to let go. For better or worse, it’s part of me. 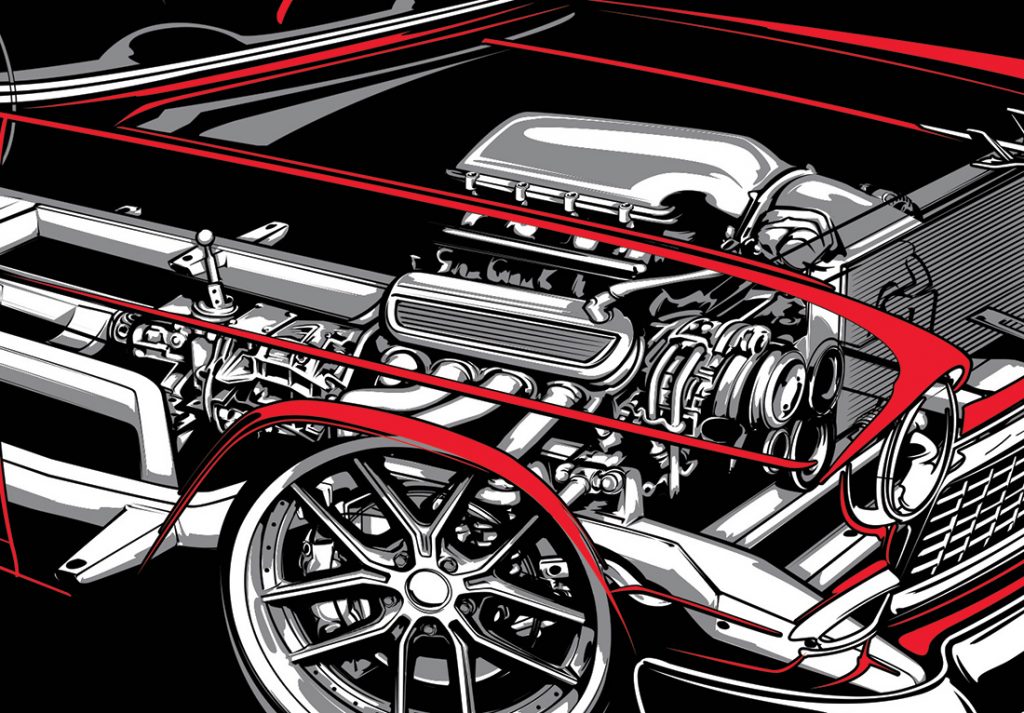 It has its advantages:

I mean, man… it’s those little things, those weird, small details that bring a drawing up from just a few lines to some cohesive design… that’s fun to look at.

OK, so what’s the point here? To note how much crap I can pack into a sheet of paper that’s pretending to be a car? Sure. I mean, no… it’s a bit bigger than that.

I’ve been slowly making time to create some tutorials on drawing cars, and while handling the basics is cool, and probably the most logical place to start, I was noticing something… well… missing (see s trend here?). I took a step back, and realized that what was missing:

I mean, sure, you can teach someone to draw, or to paint, or to use software… but it’s those little life experiences that make it come together. Teaching someone to observe, and then to apply what they’ve seen, what they’ve witnessed in some way… that, my friend, is the shiznit. The part when it all comes together, and someone begins to develop a unique style, versus simply mimicking another, or rote-learning some pen strokes.

With that in mind, I started to re-teach my kid to draw. To listen to music, watch film, read… and, even better, to create with an emphasis on the harmony of what he is doing and the things that are going on around him and his work. Hell, I’d be stoked if the boy mowed the lawn in interesting patterns and cut the plants into topiaries resembling mythical creatures locked in battle over the weeds he strategically left behind. Then again, perhaps I’m reading a bit deep into things here.

I want my work to be a constantly evolving entity. To be a little more than the sum of its parts. And, perhaps more importantly, to pass that idea forward in the tutorials, and inspire someone to push themselves in the same way… How cool would it be to not only push an artist in their art, but have that very act come back and do likewise? 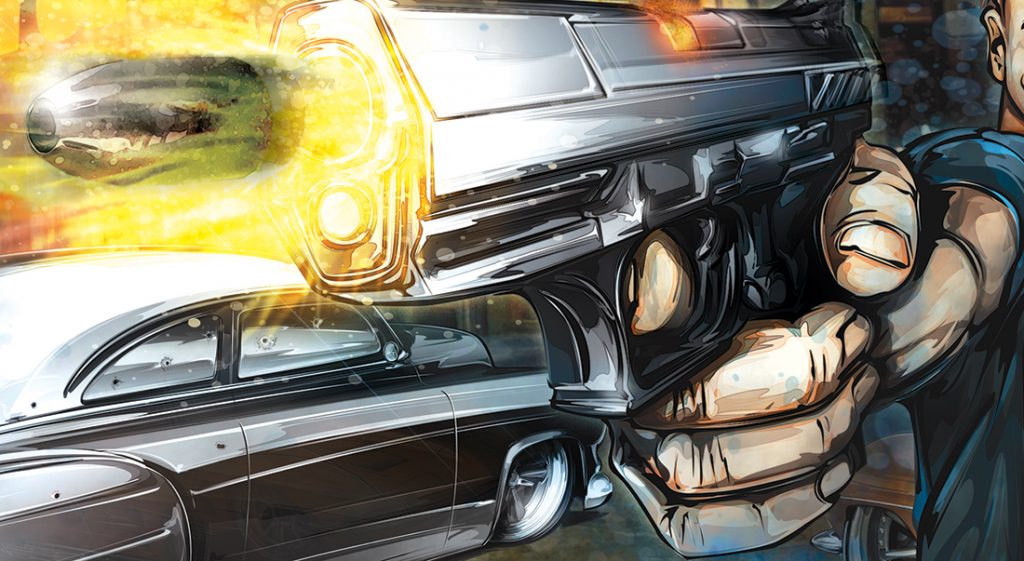 I really want to see my art pack even more detail. If there’s any truth to the old saying that the devil’s in the details, then I want my work to become some sort of twisted, demonic state of Mardi Gras, complete with a never-ending exchange of cool visuals for strings of “wow, I never noticed that before!”.

Here’s hoping I can finish up some tutorials, perhaps inspire a budding artist or two, and who knows… get to bed before dawn, or eat a warm meal sometime soon… 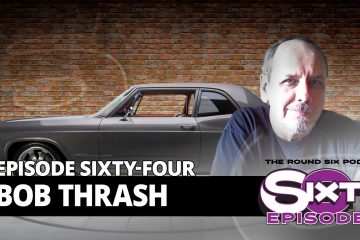 Drawing Cars: Finding That It’s All in the Details