I like looking at things from a decidedly different angle. I am often inspired to seek out the inspiration behind a trend, or a particular style. I’m a fan of mixing and matching themes, styles, whatever; and an even bigger fan of just having fun with whatever I’m doing. Often, I seek out things that reflect this attitude. Whether in friends, books, movies, or music, occasionally this leads me to seek out stuff that’s a bit off the beaten path. Such was the case here once again. This time, the path leads us to Bellflower, California.

Anyway, I got to thinking, of all things, about Herb Alpert (not Marv Albert; that’d be weird.), and gave a listen to Whipped Cream and Other Delights. A far cry from what I was listening to a week ago, to say the least. And by far much stranger, if not quite risque’ cover art, considering its 1965 release date. (and should you be a trivia buff, the model’s name is Dolores Erickson. She is on a few other album covers including Nat King Cole’s Touch of Your Lips.

Getting Down to (Tijuana) Brass Tacks

Granted, this album was released before my time (granted, there may be another me in some other dimension, hanging out in a lounge giving this a listen back in an alternate ‘65), but man, how cool were these cats? If you’re not familiar with the Tijuana Brass, here’s a quick history lesson:

Herb Alpert was a trumpet player who developed a unique sound that was a mix of south-of-the-border, mariachi and distinctly lounge-y sounds, probably best described as Ameriachi (as I learned from a few sources). If you’re really lost here, think of the bachelor’s theme from the TV show The Dating Game, called “Spanish Flea”, which was a Herb Alpert/Tijuana Brass tune, and you’ll have an idea.

Anyway, the ‘Brass cranked out a few albums in the ’60’s (even a cool Christmas album! Find a copy, and mambo your way through a Christmas Wonderland…), until Alpert called it quits, and took his (and business partner Jerry Moss’) record label A&M, and signed some heavy talent, releasing a few albums of his own along the way (out-selling Michael Jackson in the late-’70’s, which says a lot for that era, I suppose), before selling the company to PolyGram in the late 1980’s.

So what’s this got to do with cars? Think traditional lowriders. Bellflower custom style (named after the city in LA county where the look spawned). A mix of the lowrider and custom car, and you’ll see where I’m headed.

It is the embodiment of the Bellflower look… the low stance, simple (if often ANY) body mod’s, the bold, yet somehow understated paint technique (much like his T-Bird that came before), and those killer pipes. The East LA style, mixing elements from two cultures (like the Tijuana Brass did!), and coming out the other end with a clean, cool style. It’s all about class, luxury, and style. Just like a lowrider, but with custom roots.

Lowriders embodied Mexican tradition. Cruising in a decked-out ride to impress the ladies, and show off your skills was more than just about the cars. Cruising may be traced back to the paseo, where singles would walk around in the central plaza of the village, basically checking one another out. The idea here was to impress. Put these kids in cars, and it sure looks a lot like cruising! Which brings us forward a few years to the end of the second world war. Hot rodding was booming as young men returned from military service, eager to make creative use of their new mechanical skills. On the other end of the spectrum, the Mexican immigrants were making their cars look luxurious. It was style over speed; lowered stance, different hubcaps, an accessories like spotlights, skirts, pipes… Many items shared in traditional customizing.

Fast-forward a few more years, and combine this look with the growing custom scene, and well, you got some clean, mild cars that made the most of the new styling coming from the factory. Apply it to a luxury car, and you’re well on your way to a crossover look beyond compare. Imagine in late 1957 (coincidentally, the same year Bellflower was incorporated as a city), a young Larry Watson cruising into the Clock Drive-In in his panel-painted T-Bird.

I have a soft spot for this look. A number of years back, I sketched up a modern take on the look, combining it with the pro-touring look — note pinstripe whitewalls on a 5-spoke as a nod to the classic “Supremes and pinners” look (OK, and a mild chop, extended quarters, relocated and shortened trim): 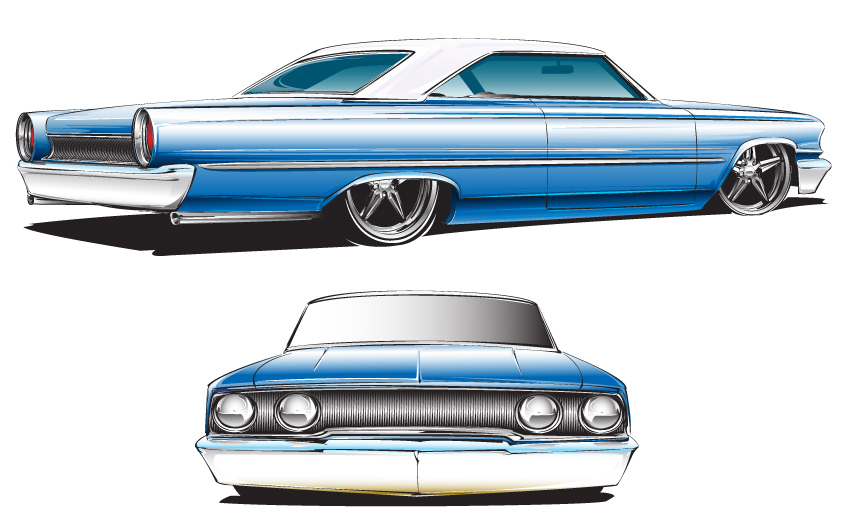 The idea behind the Bellflower look is clean lines, cool, vibrant and rich colors mixed with just enough chrome to keep your eyes happy. Make use of some ‘flake or pearl, some striping… In other words, think mild custom, but dressed a notch higher. It’s a fun style, to be sure, much like Herb’s band of session musicians belting out Ameriachi cover versions.

The Toppings Make the Change

And speaking of cover versions, consider how just a few fresh chords, or an alternate take on a solo in a cover song can change things up drastically. Consider the lowrider style, versus the custom car style. One change can send the car from one camp to another. For instance, this pickup is pure lowrider flavor: 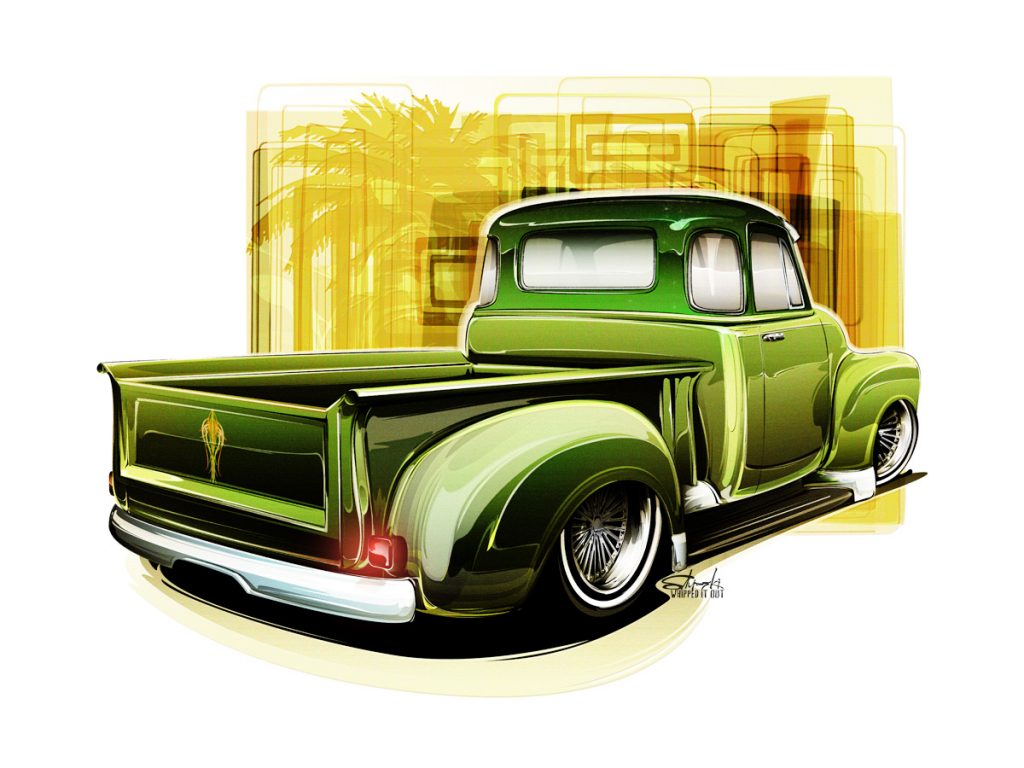 Yet, this ’50 has a distinct hot rod/custom feel: 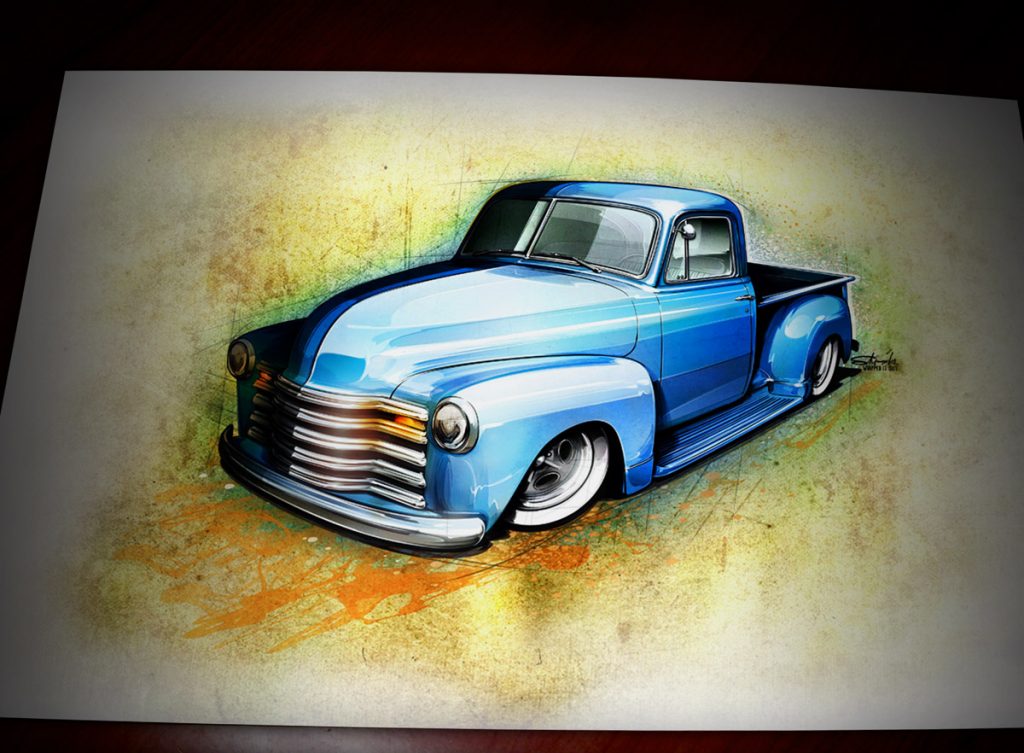 Straddling that line, and walking a bit closer to contemporary style (yet still working-in some retro-style mods) is this unibody Ford: 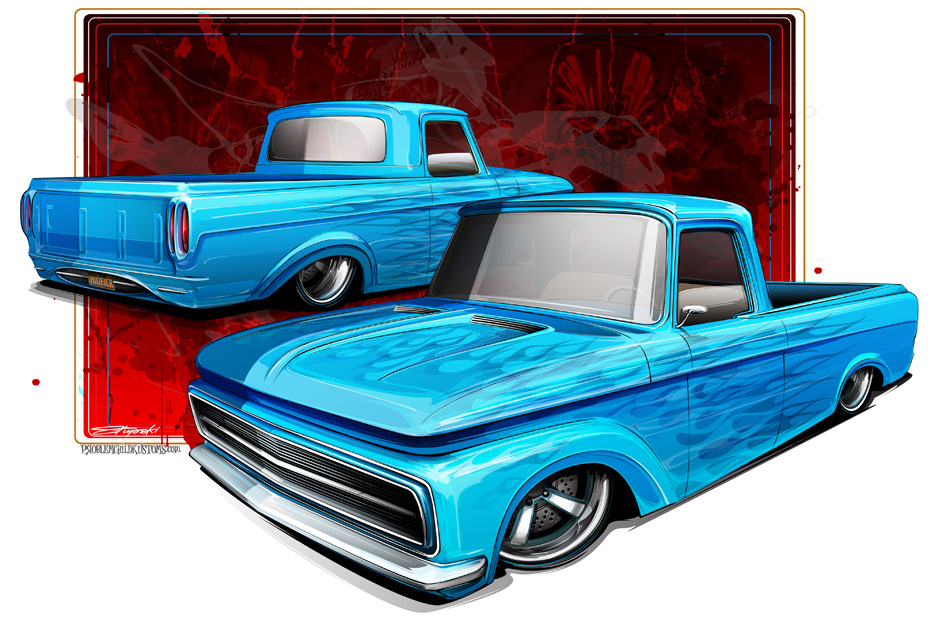 Consider the Impala and Rivieras of the early (and even mid-to-late) 1960’s. The kind of cars that walk between street machine, muscle car, custom, lowrider, and never seem to get lost along the way: 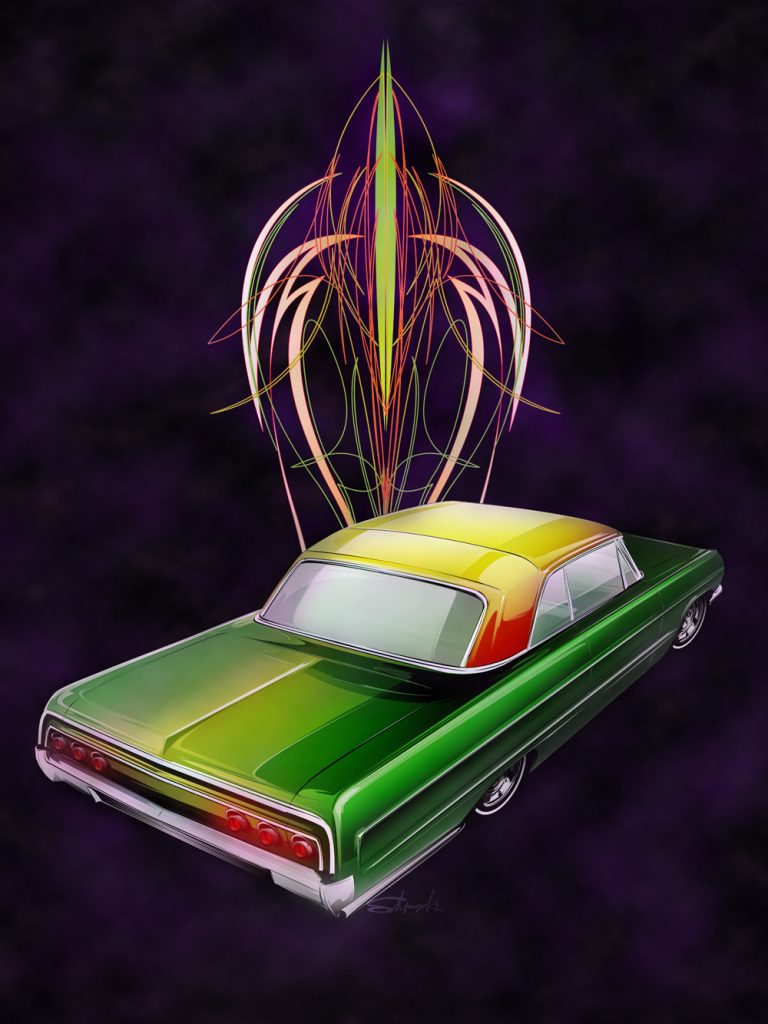 Simply adding or removing an accessory can dramatically change things up. Sort of like adding a horn section to your punk band can suddenly change things to sound much more like Ska:

Imagine swapping wheels on this beast… it can go from mild to menacing, and be equally at home almost anywhere.

Make Your Own Recipe

A wheel and tire combo change on any of these could easily change the look and feel in a matter of minutes. It’s all in the vibe the vehicle sends. If you pay close attention to that, magical things start to happen. Soon enough, you’re leaving any ‘theme’ behind, and heading into that wild territory of making it your own. Take one thing, and spice it up with another influence, and man, you can’t help but feel the vibe.

And that’s how my mind works: From whipped cream to salsa, stopping in between for some quick history.

Leaving you to consider mixing up some styles on your project. Where will you take it? What styles do you think could be crossed-over to start a new trend? Let us know in the comments below!