This upcoming Memorial Day weekend is a time for all of us to reflect and honor the brave men and women who have served or are currently serving in our Armed Forces.  As a proud veteran, I have a profound respect for the Memorial Day holiday, and I am humbled to be included in the ranks of my fellow brothers and sisters who made the ultimate sacrifice in the name of freedom. I salute them all. This weekend is also a race fanatic’s dream, with historic races being held in nearly every top tier sanctioning body. On Sunday, there’s the Indy 500, the Monaco Grand Prix, the World 600, and the 24hrs of  Nurburgring.

On the other 51 weekends of the year, my weekend is usually consumed with chores and projects from sun up to sun down, but on Memorial Day weekend, I take Sunday off and watch as much racing as I can. Football fans have Super Bowl Sunday, but we race fans have Memorial Day Sunday. 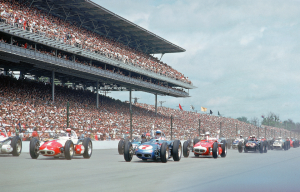 In the history of the Indy 500, there has been many different eras of race cars. Cars with mechanic co-drivers, Miller power, front engine Offenhauser roadsters, diesel power, turbine power, rear engine Cosworths, stock block Chevrolets, Buick V-6s, Oldsmobile Auroras, Ilmors, Mercedes, the list goes on and on. If you ask a vintage Indy car fan what their favorite era was, they’ll most likely tell it was the Roadster Era, and for good reason. The Roadsters were a perfect representation of where racing was at the time. The years after World War II were a time of booming innovation mixed with a sense of adventure, and the Roadsters fit that attitude perfectly. They were loud and fast, with the brave drivers in scant safety equipment muscling their cars like gladiators in a coliseum.

Technology hadn’t invaded Indy cars yet, so they were designed with style and beauty in mind. Many of them were meticulously crafted works of mechanical art, ready to do battle at over 150 mph, and because of that, not many of them survived. And sadly, that was also the case for many of the drivers, as well. 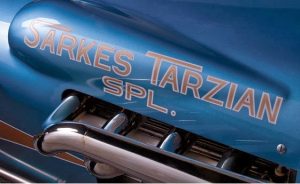 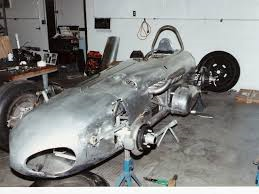 In late 1961, master race car builder Luigi Lesovsky bought build plans from another famous race car builder, A.J. Watson, and was commissioned by Elmer and Mari Hulman George to build an Offenhauser powered roadster to compete in the 1962 Indianapolis 500. At the time, Lesovsky was one of the top race car builders in the country, with his Los Angeles shop on the corner of 53rd and Figueroa cranking out some of the most beautiful race cars in history. If the name Mari Hulman George rings a bell, it’s because she was the daughter of Tony Hulman, the man who owned the Indianapolis Motor Speedway.

So, with that kind of financial backing, this Lesovsky roadster was certainly going to be a first-class, no-expense-spared race car.  Lesovsky built the tube chassis, hand formed his signature Ferrari F1-style nose, and mounted the 325 horsepower Offenhauser 4 cylinder offset to the left side of the car, mounting it nearly horizontal in order to keep the car low and sleek. The car was then painted in a medium blue with gold accents, with radio mogul Sarkes Tarzian as the primary sponsor.

The car was to be driven by Mari’s husband, Elmer George. By many accounts, this car is considered as one of the most beautiful roadsters to ever run at Indy. 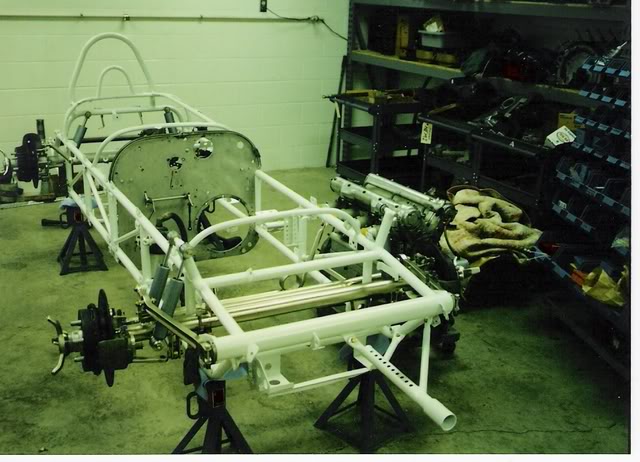 WHO WAS ELMER GEORGE? 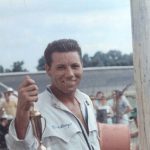 Elmer was born in Hockerville, Oklahoma in 1928. He was a no-nonsense, tough kid, who started racing cars at an early age. A sprint car driver, he drove in the AAA and USAC Champ Car series, with solid finishes and a 1957 USAC Sprint Car Series championship to his credit.

He met Mari Hulman, and they were soon married. He and Mari had three daughters and one son.

Their son, Tony George, eventually became the CEO of the Indianapolis Motor Speedway and the founder of the Indy Racing League. 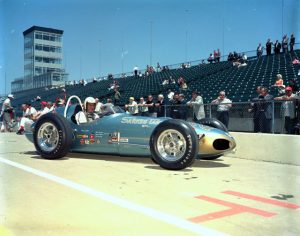 Hopes were high for car number 21, the Sarkes Tarzian Special, and Elmer qualified the car 17th with a speed of 146.092 mph.  The race starts, and Elmer is running mid-pack.

The car finishes the race in the same position that it started, 17th. Rodger Ward won the race in the Leader Card Special, with his teammate Len Sutton finishing second.

The Sarkes Tarzian Special returns to Indy in 1963. Elmer qualifies the car 28th, and winds up retiring after 21 laps due to handling problems. But, that’s not the end of the story for Car #21…

With new sponsorship from Indiana-based Kemerly Chevrolet, Mel Kenyon took over driving the roadster on the 1964 USAC circuit at Milwaukee, Trenton, and Phoenix, never finishing higher than 5th place. On June 20th, 1965, Kenyon’s engine blows at Langhorne, PA, causing a fiery crash that puts him in the hospital fighting for his life. Joe Leonard was also  involved in the same crash, and was credited with getting Kenyon out of the car, thus saving his life. 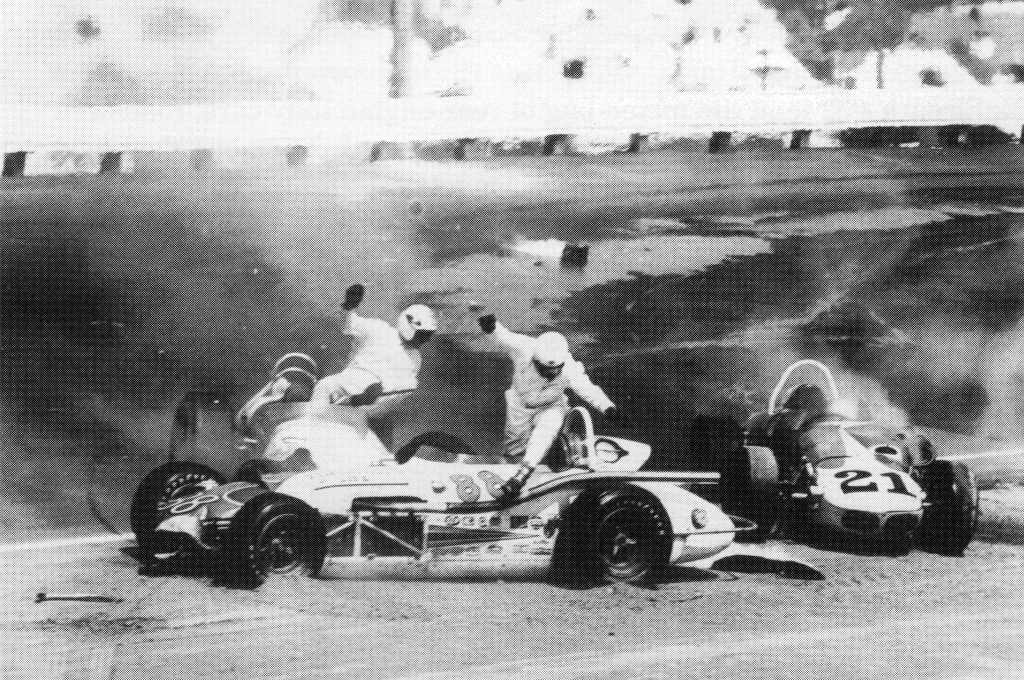 The car ultimately went into storage sat unmolested at Richard Kemerly’s dealership for a number of years. It was eventually restored to it’s 1962 “Sarkes Tarzian” livery in the early 1990s. In 1998, it was acquired by the Milhous Collection, where it spent time at the Peterson Automotive Museum in Los Angeles and at the Louis Vuitton Classics Collection at Rockefeller Center in New York City. In 2012, it was acquired by collector Tom Malloy, who’s team performed a five-month full in-house restoration.

As an added note, fellow Round Six member Brad King performed the outstanding striping and lettering on the finished car.  Very cool! 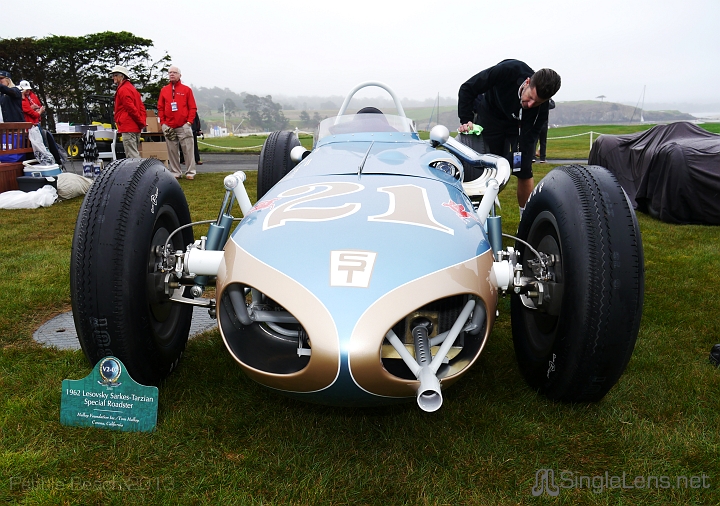 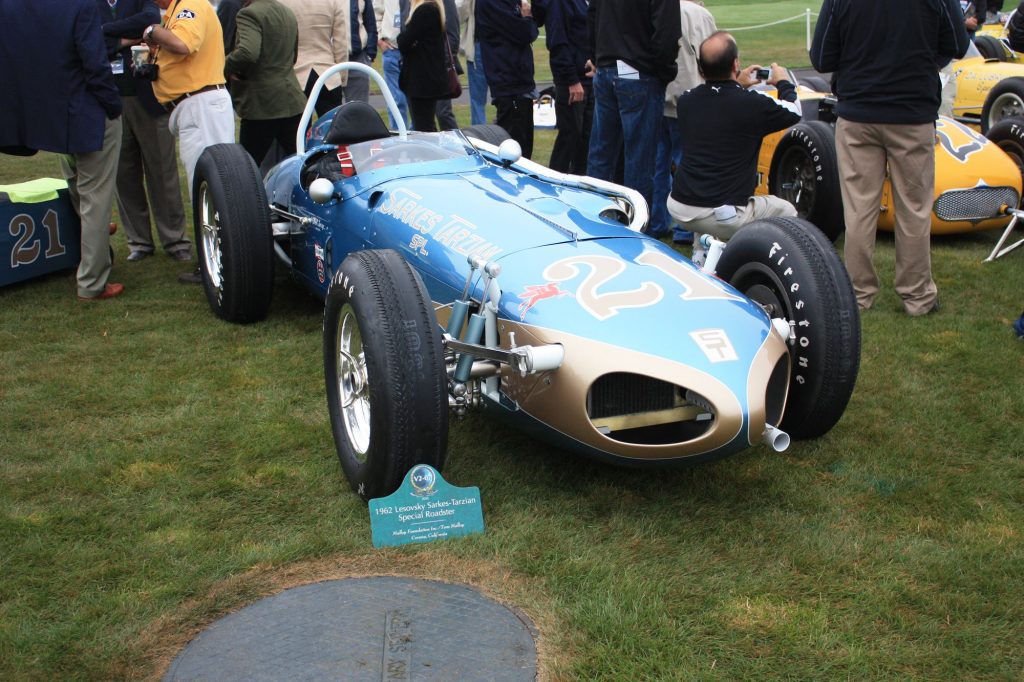 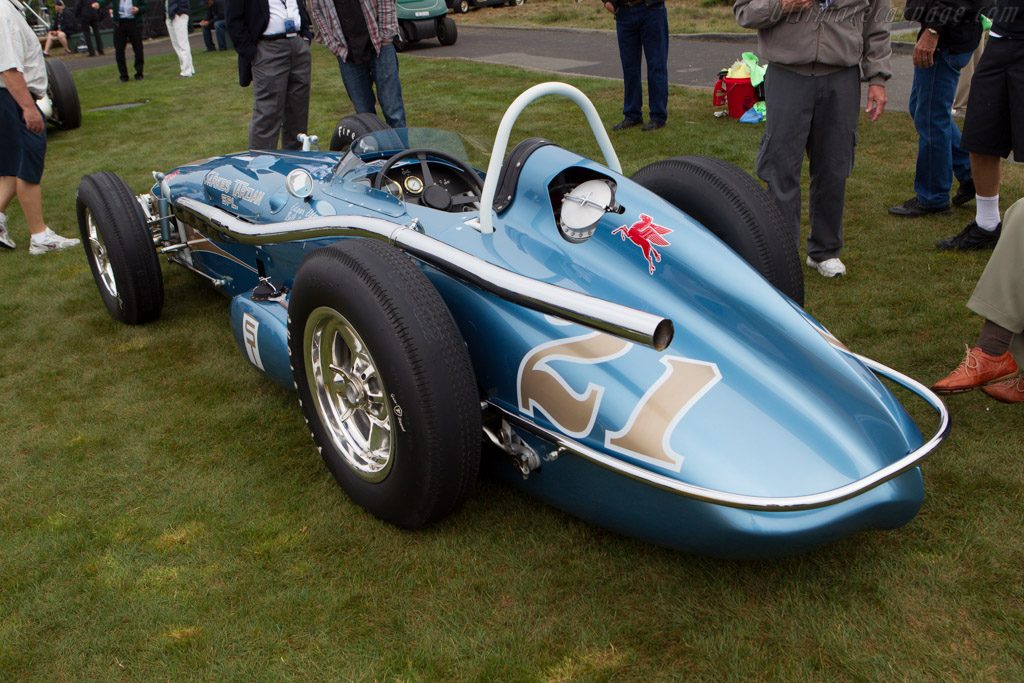 THE SAD SAGA OF ELMER GEORGE

After retiring from auto racing as a driver, Elmer went to work for the Speedway, becoming Director of the Indianapolis Motor Speedway Radio Network. In the early 1970s, he was a bit on the outs with the Hulman family and wasn’t held in high regard. On May 3rd, 1976, Mari Hulman George filed for divorce. On the morning of the 1976 Indianapolis 500 (May 30th), Elmer got into a telephone argument with Guy Trolinger, a horse trainer at the Hulman family farm near Terre Haute, and Mari’s alleged boyfriend. After the race was over, Elmer drove to the farm and confronted Trollinger. At around 1 AM, gunfire broke out, and Elmer George was shot and died of multiple gunshot wounds.

A grand jury ruled that Trollinger killed Elmer George in self-defense, and charges were dropped.

The legacy of Elmer George seemed to slip away into obscurity. However, if you are a bit of a conspiracy theorist, consider this twist: Mari was finally rid of Elmer George, and the Hulman family breathed a sigh of relief that Elmer was never going to have the potential of being the possible heir to the Speedway. End of story, right? Far from it.

Elmer and Mari’s son, Tony, took over as President and CEO of the Indianapolis Motor Speedway and also Hulman and Company in 1989, making Tony the czar of the entire Speedway operation. Tony was a bit of a maverick, like his father, and it didn’t sit well with his three sisters, who were traditionalists like their mother. Tony wanted to see the Speedway used by other sanctioning bodies, not as a one-event facility. Purists gasped when Tony announced that NASCAR was going to run the Brickyard 400 in 1994.

They squealed when he brought in the IROC series to race in 1998. However, they flailed on the ground in agony when he invited rival series Formula 1 to the Speedway in 2000 for a rebirth of the U.S. Grand Prix. In the meantime, Tony had gotten tired of playing by the rules of the CART Indy car series when they came to his track, so he hatched the idea of having his own series, the Indy Racing league (IRL).

The premise of the series was to bring Indy car racing back to it’s roots, with American drivers, American powerplants, lower budgeted teams, and the elimination of road courses. The idea quickly backfired, when lower tier American and foreign drivers filled the grids in foreign chassis with foreign engines. The CART/IRL split nearly killed open wheel racing in the United States. Only until recently has it shown signs of life again. Tony George was forced out as CEO in 2009, led by his three sisters, who cited that Tony had spend millions of the Speedway’s money on the dying IRL. Add to that a $60 million overhaul to accommodate the Formula 1 series, which dropped Indianapolis off the series a few years later. The damage was done, the Hulman legacy and the reputation of the Indianapolis Motor Speedway was tarnished. Did Elmer get his revenge on the Hulman family through the actions of his son, Tony? Maybe so.

And through it all, the Lesovsky roadster lived the life of a typical race car. It was blown up, crashed, burned, forgotten, and like the mythical Phoenix, rose from the ashes to roar again. A big “thank you” goes out to all of the people who were involved in bringing it back. It had too interesting of a history to be forgotten.