Art inspires on many levels. Since childhood, I’ve been fascinated with cars, photography, and motion pictures. Cars were something I had no control over being into. I was simply born with that gene. On my build sheet, someone checked the RPO for Car Nut, and the deal was sealed. But photography… capturing a moment in time… man, that sparked something in me. Art was a given. And motion pictures? Well, damn. Telling a story with a photo narrative, and having it grab that in an animated sequence? I was sold.

I studied Fine Art, and honed skills like drawing and painting, design… And then went further, studying animation and digital art, and finally working to apply these diverse techniques for creating imagery in one piece.

The majority of my commissioned work happens to be renderings, which, by nature, require strictly static images to supply some direction for a project. As a fan of both animation and painting, as well as someone who has always enjoyed writing and the thrill of crafting a narrative, well, you can imagine the turmoil which surfaces each time I grab a pencil or stylus or brush to create or hone my art. 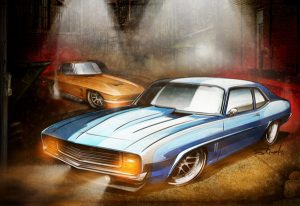 There’s always the drive to take the subject that extra step… to get something to move in the image, to put it over the top. Some time back, I experimented with backgrounds in my renderings that included scanned and reworked splashes and splatters. They had that ‘frozen in time’ feel I was looking for, and allowed me to play with contrasting colors to get some visual pop and movement… And that laid the groundwork for future pieces, sparking inspiration to play with textures, atmosphere, and finally, crafting a story.

The idea, in and of itself, was straightforward. Simply create the setting for the story, and shove the car in there. Right? No… in my world, things have to be a bit more complex when weaving the tale or painting the image. I began taking notes on cars I’ve drawn, would like to draw, and those I simply find interesting. Art needs to inspire!

I began to imagine where these cars might turn up… who would drive them. 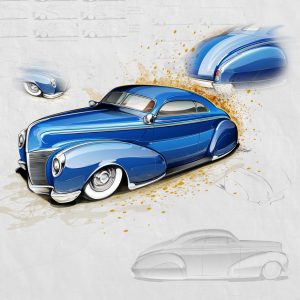 Why they would drive them there in the first place. Inspiration began to strike.

There was a way to connect all of the images, but have these little sub-plots running, and even include a car in each of these unique stories. I’d build the stories individually, but have some underlying theme carrying throughout an entire series, or even a few series.

The example to your right, showing that blue Merc was bouncing in my head for some time. I always saw the car as a bit sneaky-looking, even when designing it. I imagined the kind of guy who might drive it, where he’d go… inventing little stories as I sketched ideas and details, keeping those notes handy. 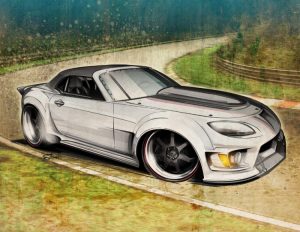 Right on about this time, I took on the AutoWeek Magazine/Rad Rides by Troy 2012 calendar project. Twelve cars to be illustrated, creating some bad-ass, modern hot rods from new cars. Here it was: the opportunity to play with narrative, and work to tie a dozen cars, all different in their inspiration and beginnings, but having some underlying story, a connection that went just a step beyond simply being some cars I was designing and illustrating for a calendar. This was beyond simply creating art. I needed to create time as well.

The challenge became finding a way to make them all work together, yet retain some unique identity. Then it hit me. A calendar helps to mark the passage of time. I would mark some passage of time with the cars, as well. I would break the year down as if it were simply one day. I’d tweak the colors to represent the cycles of the sun, the passage of seasons, and yet, do it in a way that presented itself as a single twenty four-hour span. I’d move around a fictional region, from urban to dry lakes and everything between, and pass time from dawn through nightfall. Each vehicle needed a place, a setting to complement its purpose, and needed to make sense with that particular time of day.

What a can of worms that was. Light shifting throughout the day, atmospheric changes filtering intensity of light, I had even considered altitude of each setting, plotting how the air molecules might scatter the light. I became almost obsessed with color and light theory. But I managed to pull it off. I created art! 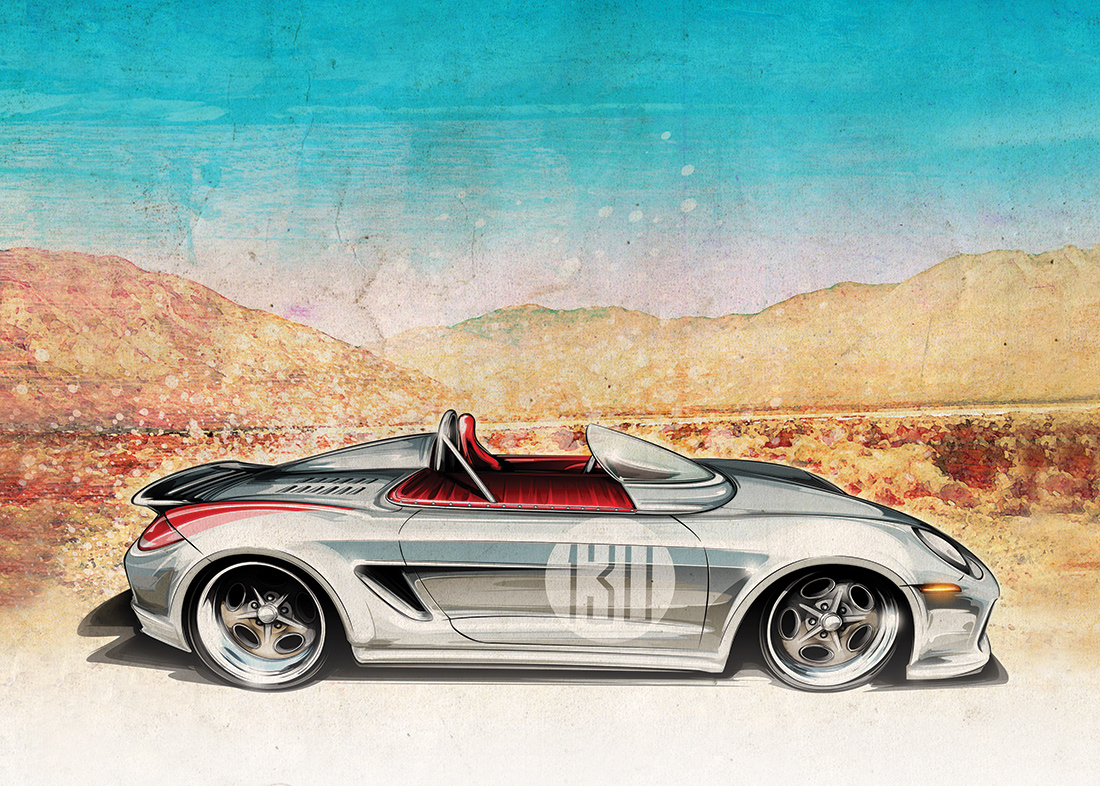 But the work that led to that grand project only sparked a deeper need to weave some tales. I experimented relentlessly. Dragged old work out of the archives, and played and tweaked and painted and scanned and printed and brushed and sketched and repeated the process for months. I was on to something. 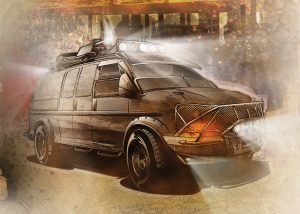 Of course, there were a few pieces that played to my inner nerd…

We all need to hunt a zombie or two now and then… and at this point, I was finding ways to craft an entire tale in one shot.

There’s a LOT going on in this image, from the lighting to the smoke and atmosphere to texture… But the key was in making it look simple.

Note taken:When creating the narrative, find the central theme, and work to craft a setting that slips the drama in almost secondary to the drama created by the car. One should brace the other, and tell the tale, but not completely. Leave a few gaps in the story. Allow the viewer to ask ‘how did the vehicle end up at this particular moment, and what’s around that corner?’ Misdirect on occasion, especially on two-panel works. This could be fun.

My little notebook speaks to me sometimes, and those late-night scribbles tend to be correct more often than not.

Additional note: Sleep-deprived self may be smarter than well-rested self. Definitely finds farts funnier. 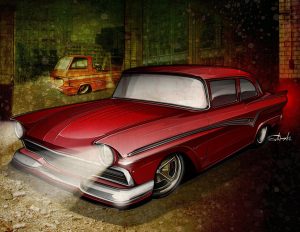 Oddly enough, the images didn’t make it into the final calendar in the order I had hoped and presented, but the idea seems to have played off well enough. I was approached by people who caught what was going on, and were excited to have felt a part of the narrative and understood the story. Now we were moving into part two of the plan:

Involving the viewer in the tale.

After all, as a kid, I loved the Choose Your Own Adventure books. Brilliantly written in that you felt a part of the action, and a certain excitement at uncovering some side story or alternate ending that your friends may have skipped over. It was that personal involvement, that ‘look what I just found’, eureka moment that attaches someone to the art, versus simply saying ‘wow… neat wheels’. 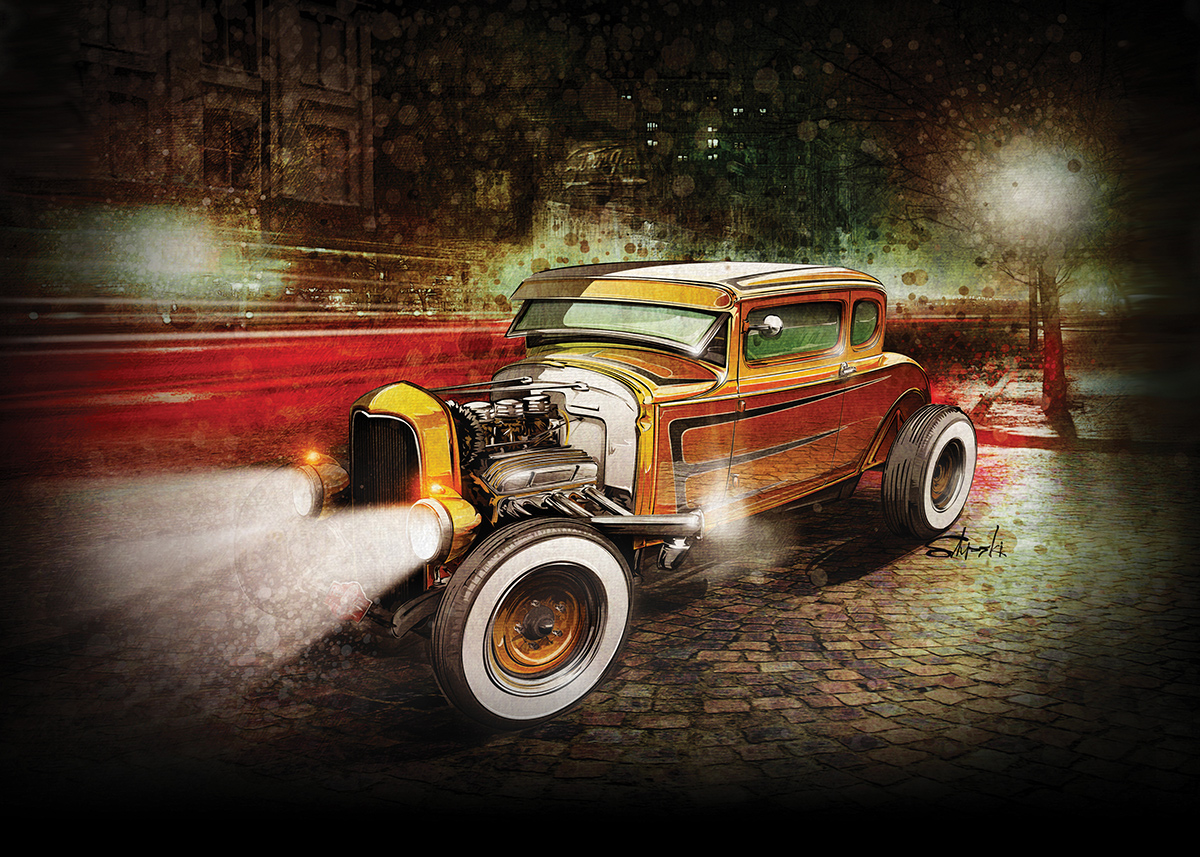 I had always made a habit of photographing odd things while on trips or vacations. 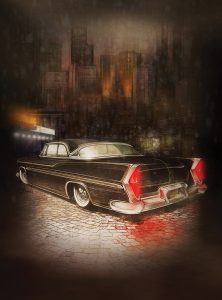 I’d see things that interested me: Cobblestone streets, a tree, a lamp post, an alley, a door… I had a large archive of reference photos to draw from, and began to arrange and categorize them, and make notes, find uses for them. I’ve always hidden little things from my past in my work, from license plates to buildings, and so-on. I have even gone as far as sketching a city map, designing the layout of the main streets, side alleys, parks and neighborhoods where my tales would play out. A series was born. 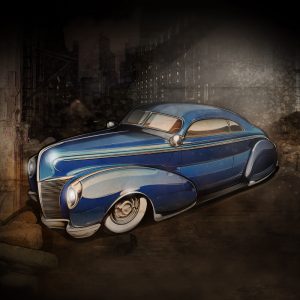 Like any tale, the players (both main and secondary) would cross paths. There might be drama, there may be harmony, but there would be interaction. I began to work with environments where I could present multiple angles and viewing points. I found that I could move this fictional camera around, and find another car hiding in the shadows, or show it from the reverse, and complete one small tale in two images.

Case in point, that Merc from earlier. 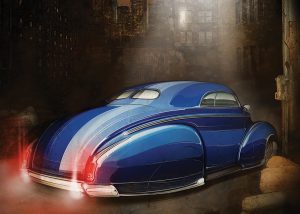 First frame: the car in an urban, industrial environment. A simple photo-perfect opportunity?

But when we see the rear view, we learn that the car’s owner is on a late-night visit to a lady friend. Each piece can stand alone… but together, we have a tale!

Taking this idea a big step forward, it only made sense to completely narrate the scene, and add as much drama as possible: 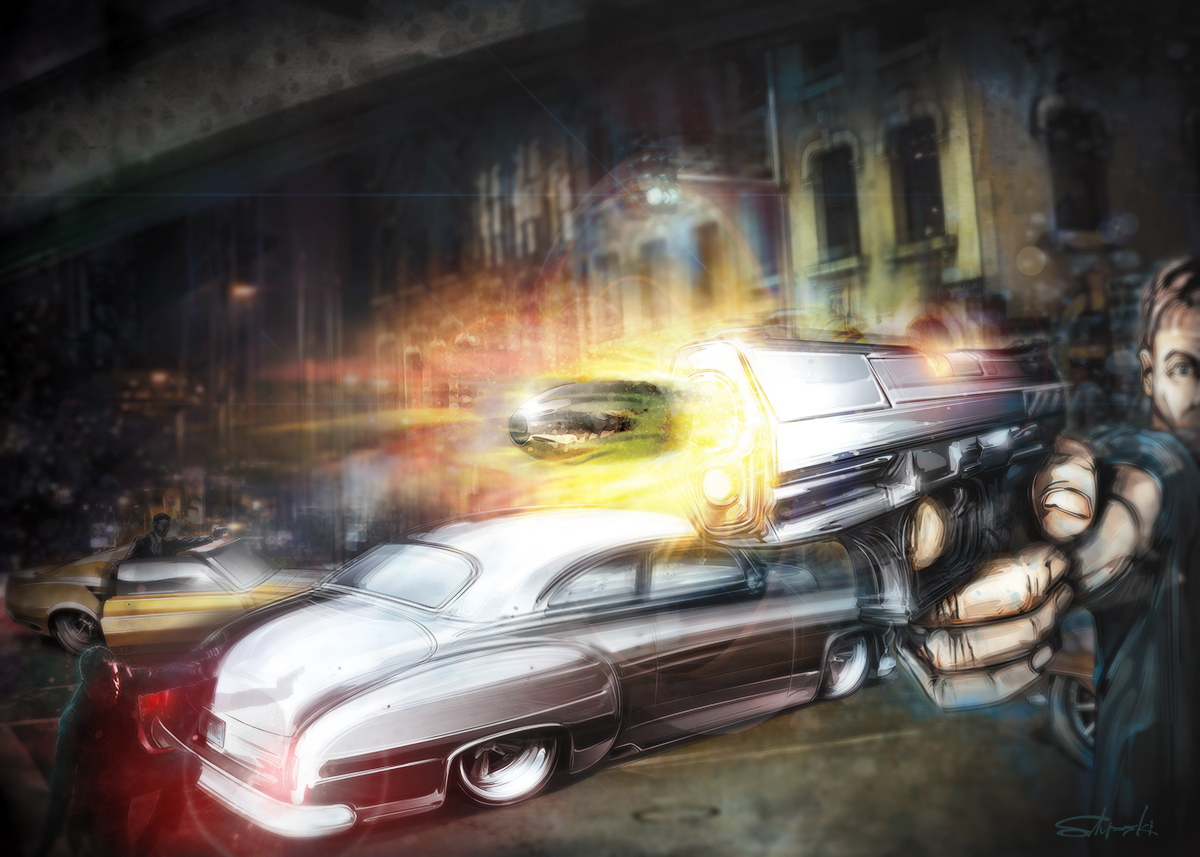 …and the polar opposite: 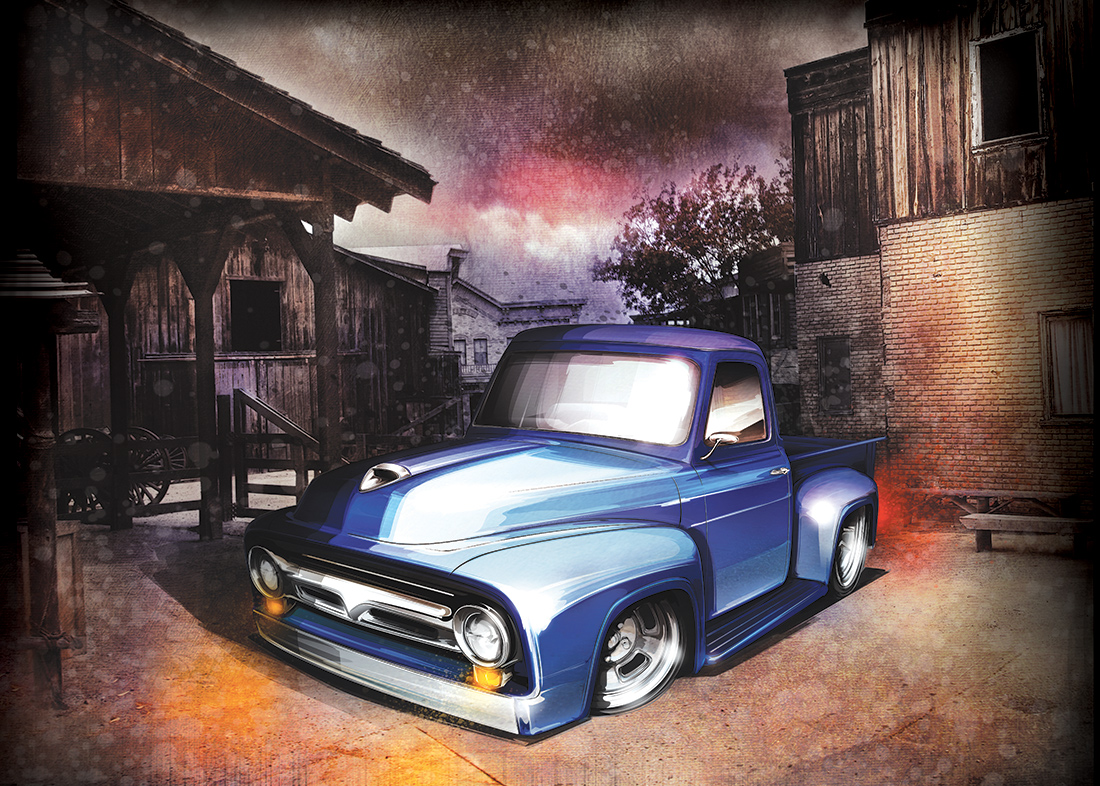 …a quiet moment before that storm we see brewing in the background. A little foreshadowing of drama can have just as much impact as an all-out gunfight. All of those years spent studying Hitchcock are paying off: The trick isn’t always in heaping the big stuff into someone’s lap… occasionally, all you need to do is hint at it.

That all said, I hope you enjoyed a little back-story to the, uh, stories I’m trying to tell in the art. Look for more in this series soon, as well as prints… and a behind-the-scenes look and tutorial on making one of these. Thanks, as always for your time, and I look forward to your questions, comments and more!

Behind the Scene: Deconstruct a Rendering

John Oro Drops by for an Intervention