That One Cool Car

To this day, the image of one car remains burnt into my brain, and quite possibly my psyche. To say that this one car’s impact had depth would be grossly understating the profound effect it had on me. As the vision of that car passed from my eyes, it left ripples along my optic nerve and slammed into my brain, forming the surface of that surrounding gray matter into some cars-only territory.

Whether it was some combination of the right time and place, or perhaps my Dad had reacted and it triggered me to do likewise, I cannot be certain. Yet, I can still vividly picture it in my mind as it drove by, and have never forgotten the scoops on the fender, the way the tail lamps looked, or even the guards on that rear bumper… Knowing what I do today, I realize that the car in question was a ’73 Challenger Rallye, and that blue car set off a chemical reaction like no other. I was hooked. It was an impression that has lasted my entire life, and chances are, will continue to linger. 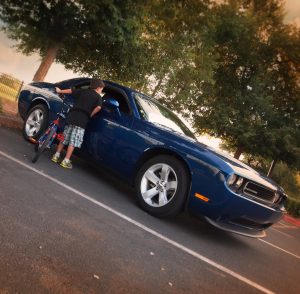 Consider the impact of that particular experience on my younger self. I had no real idea of what a cool car was at that age, outside of what I may have liked, be it color or general shape-wise. My brain wasn’t quite ready to form those particular opinions yet, but I certainly knew what kinds of things appealed to me. And that Challenger, well, it had appeal. Examining this a bit deeper, consider, too, how few modes of personal transportation can have the effect of a ‘cool car’. The car is universal. It can spark conversation, and even provide equal ground between strangers. I’ve probably made more friends via the automobile than any other of the interests I have, and some of my life-long friendships began through conversations about cars. I often wonder if the owner of that blue Challenger had any clue of the effect that his simple act of driving a cool car had on that little kid walking with his Dad. While that car continued on the way to wherever the driver was headed, there was another chance experience with yet another blue Challenger, this time being a Bright Blue Metallic ’70 R/T. I was eleven or twelve years old, and as a friend and I pedaled our bikes into the convenience store parking lot, my jaw dropped. As the driver’s door opened, I managed to squeak out ‘Cool car!’ (or perhaps ‘Rad car!’ — it was, after all, that time), and the owner proceeded to answer all of my questions.

Here was this guy with a cool car, taking time to talk to some wide-eyed kid about it. I was stoked. I became convinced that the Challenger may be the coolest car ever, and that if you owned one, you had a responsibility to be cool about it. Kid logic reigning supreme, I swore that one day I’d have a Challenger of my own, and that I’d make time to talk about it, too. While there was a string of cool cars in my driveway between that Summer day and now, it took me many years to hold the keys to my own blue Challenger. I can say with conviction that I have a pretty good idea of how it feels to be that driver, and while I don’t own a first-generation Rallye or R/T, I did own a Blue Streak Pearl 2012 model for a while… Was my color choice influenced all those years ago? I’d venture to guess that it didn’t hurt… And did that patient driver influence my eagerness to talk with complete strangers in parking lots and stop lights about my car? Oh, you can bet it did. Wherever my wife and I take it, we can almost guarantee meeting at least one new friend along the way, and enjoying their story, memories, or simply answering the ‘So, how do you like it?’ question. Our answer is often multi-layered, but can be neatly summed-up in explaining that we simply love this car.

I hope that one day as I drive through a parking lot, that some kid is looking at my car and having some life-altering moment, and if one day it will be a memory of that brief moment that hangs around and shapes the kind of car fanatic they are to become. I’d like to hope so. After all, I’m fortunate to be able to drive my dream car, and be a part of the Dodge musclecar legacy. And as an independent, self-appointed (by my twelve year-old self that long-since passed Summer day) ambassador of the cool car club, it is my duty to inspire that next generation, so that we’ll always have cars with soul to inspire those who come after.

Builder VS Installer: Where to Draw the Line?

That One Cool Car